posted 1 year ago
Approved BB submission
Super excited that my tools finally arrived yesterday, so it was time to get started on my first spoon! I ordered the Mora 120, and Mora 164 online, and then grabbed a pair of cut resistant gloves from the local hardware store. The gloves were a bit of a pain as I didn't have my full finger movement, but pretty sure they're worth their weight in gold as I would've stabbed myself in the thumb a number of times with the end of the short knife...I also had a bit of old sandpaper lying around that I used to clean it up at the end and that made a big difference for making it look finished too. I used a saw (old rusty one as hubby keeps the new one with him in the car for work), axe (couldn't find either hatchets, pretty sure they're buried in the wood pile -_-), and a chunk of broken brick (for whacking the axe while splitting the wood. Had the axe set up where I wanted it, and the brick happened to be within arms reach. Quite surprised it held up!) to get the wood to a workable shape.

Follow the journey of our family of three, cat, dog, chickens, and two dairy sheep at our tiny house homestead on less than an acre
https://innisfreehomestead.com/

Nicole Alderman approved this submission.
Note: I hereby certify that this badge bit is complete, and congratulate you on your Roundwood air badge!

Rebekah Harmon
Posts: 120
41
posted 1 year ago
Edge case BB submission
On this project, I learned what greenwood is, and why carving a spoon from greenwood is easier!! Haha! 😆 so... the 3 sticks in the first pic didn't end up all becoming spoons. But I'm excited to try carving a nice, eating-spoon soon from better wood!

I tried carving a lip that will hold the spoon on the edge of the pot it stirs. I dislike fishing spoons out of pots! Hah. Ignore how much the spoon looks like a dick...... that WASN'T intentional

Someone flagged this submission as an edge case BB.
BBV price: 0
Note: Could you please share a photo of how your spoon won't slide into the pot?  We're having trouble understanding that part...

Someone approved this submission.
Note: We do like to see spoons that have thinner "normalish" handles but if you have a purpose for yours, that's fine.  And it's nicely sanded/finished.

Nicole Alderman approved this submission.
Note: I hereby certify that this badge bit is complete, and your spoon is gorgeous!

posted 10 months ago
Approved BB submission
This is the first spoon I've carved since the winter. I started with a piece of cotoneaster, I think, that I found lying in the woods after some paths had been trimmed (I also got some plum which I am very excited to carve!).

I used a hatchet to split off two blanks and for initial shaping. I then used a Mora 106 for the bulk of the carving and the finishing, alongside a Mora hook knife (I'm not sure which model but it's double-bevelled, not hollow ground and I really don't like it! I have asked a local blacksmith to make me one with a much tighter curve for right-hand only use). I gave the spoon a sand with some 150 grit paper to finish it.

The finished spoon is super smooth and lovely to hold in the hand. Much of the finish came from the carving itself, with the high spots knocked down with the tip of the 106 (in a scraping action) and then a touch with the sand paper. I also raised the grain with a damp sponge and re-sanded.

It's somewhere between a teaspoon and a desert/soup spoon in capacity. I'd happily use it to eat with - and intend to do so.

Small-holding, coppice and grassland management on a 16-acre site. 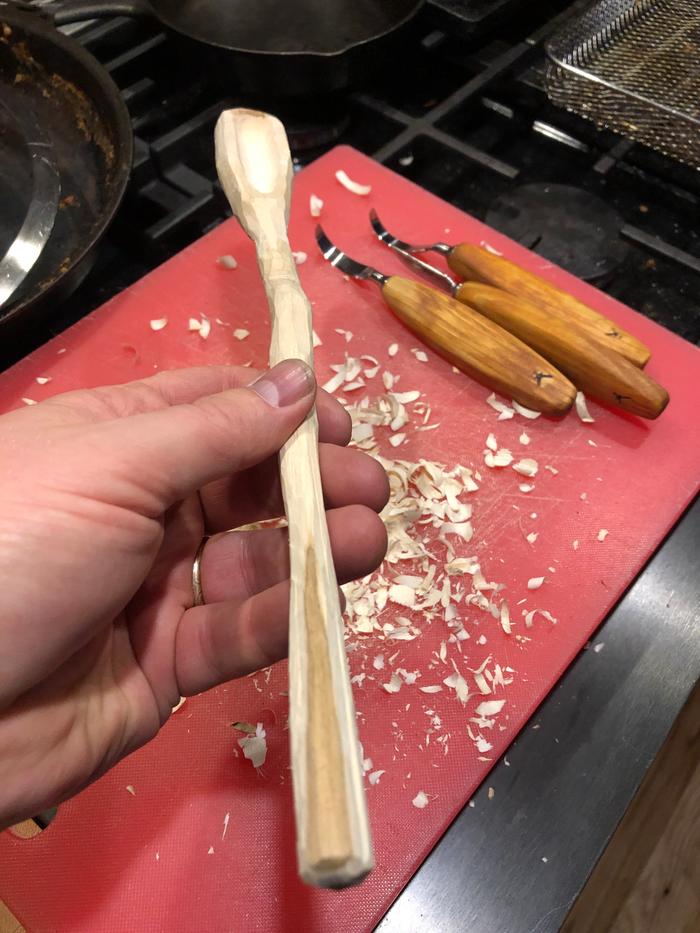 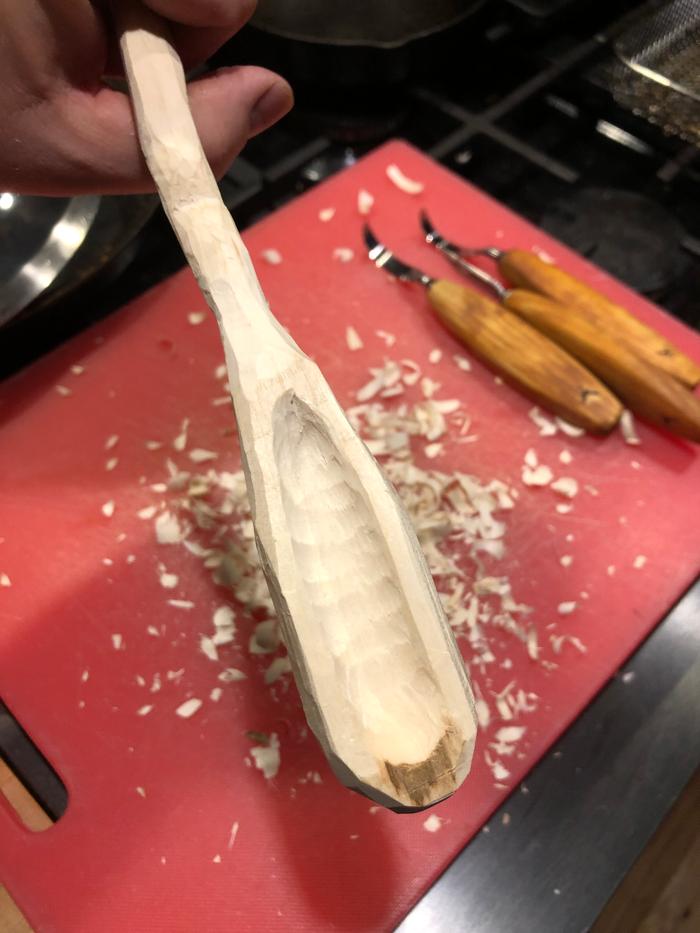 Someone flagged this submission as an edge case BB.
BBV price: 0
Note: Keep going - thinner on the spooney end

Someone approved this submission.
Note: Based on added photos in the next post

At first I thought that meant to reduce the height of the bowl, but I’ve come to think, while carving at it, that you meant to widen the bowl and reduce the prominence of the rim. Hopefully that’s right. How’s this look? (It’s pretty different, but I’m not sure how drastically you thought it needed to be changed. ) 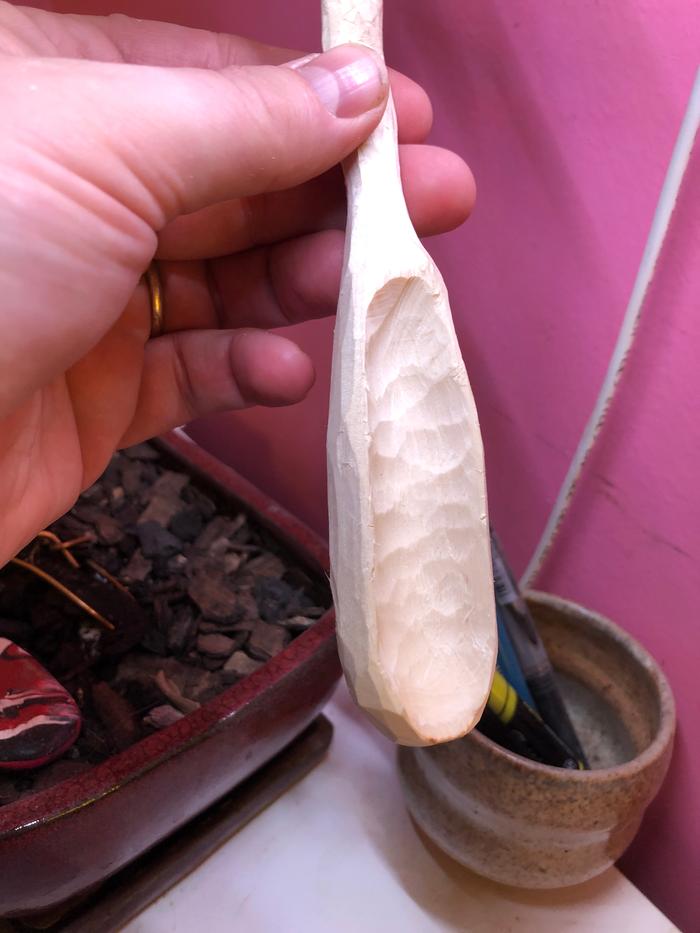 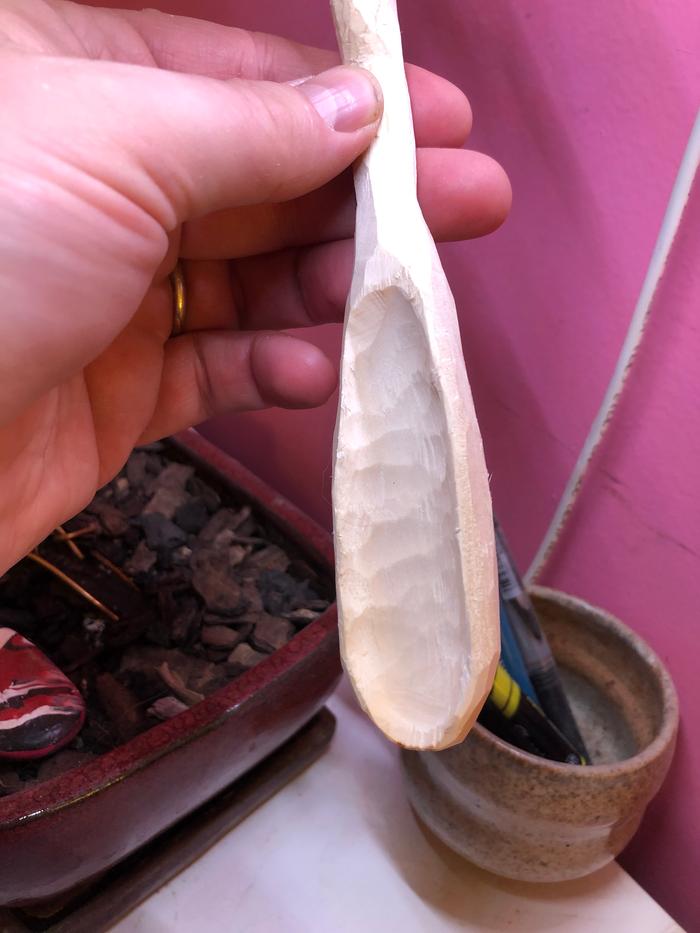 Minimum requirements:
- useful size and shape
- smooth
- something you might actually use
- made with hand tools only

To get certified for this BB, post three pics.

- Your chunk of wood that you are starting with
- Progress about half way through, with the hand tools you have decided to use for this
- Final product

I used a fallen branch from a Tulip Tree. I cut a section long enough for the spoon and split it with a hand axe. I outlines a spoon shape and removed a fair bit of wood with my hand axe. I then used a whittling knife and spoon knife. I’ve never done anything like this before. I’m surprised how much my hands ached. It was hard work especially the knot in the spoon bit. The finer spoon in the next challenge is going to take a lot more practice.

Here are photos showing the tools I used. 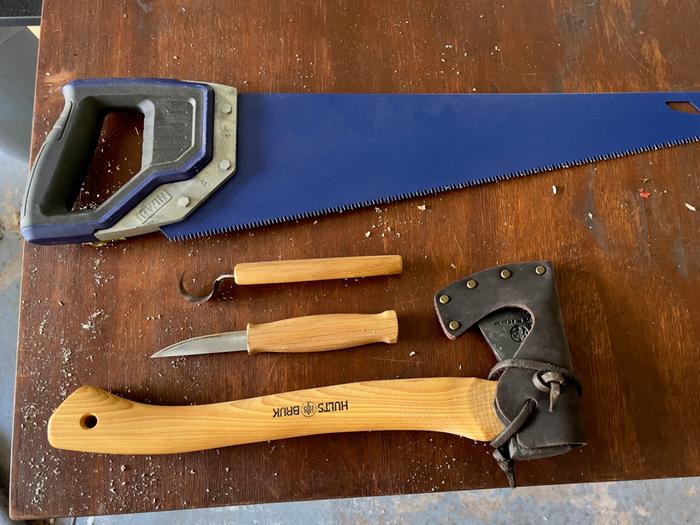 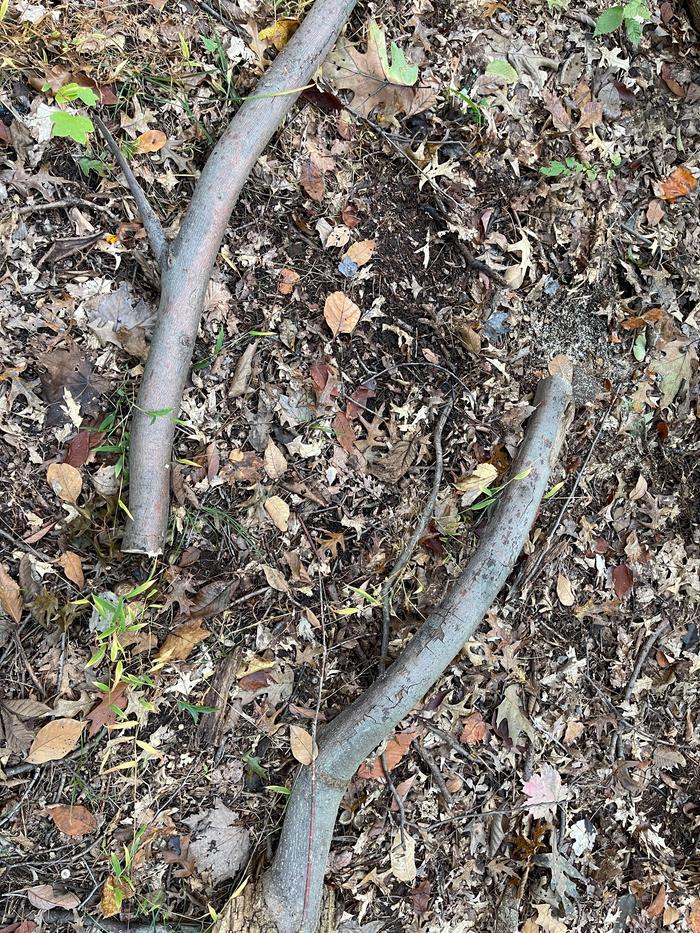 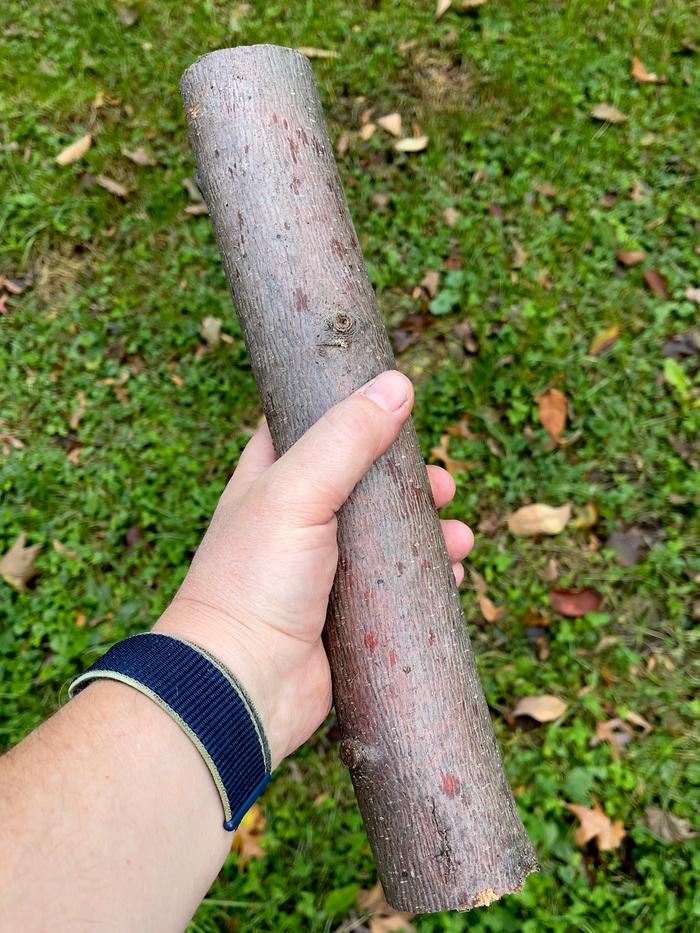 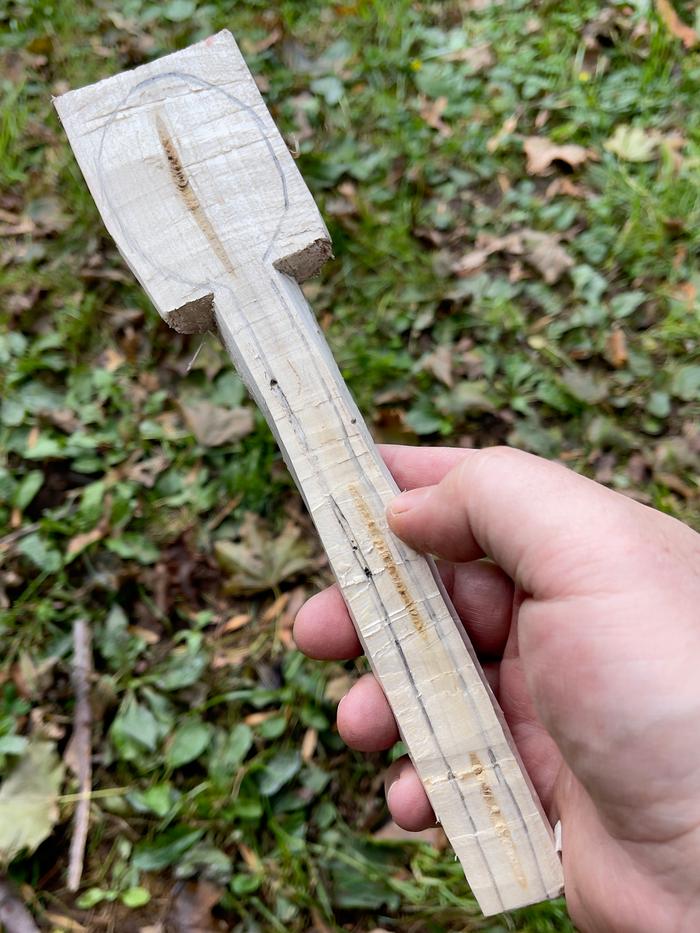 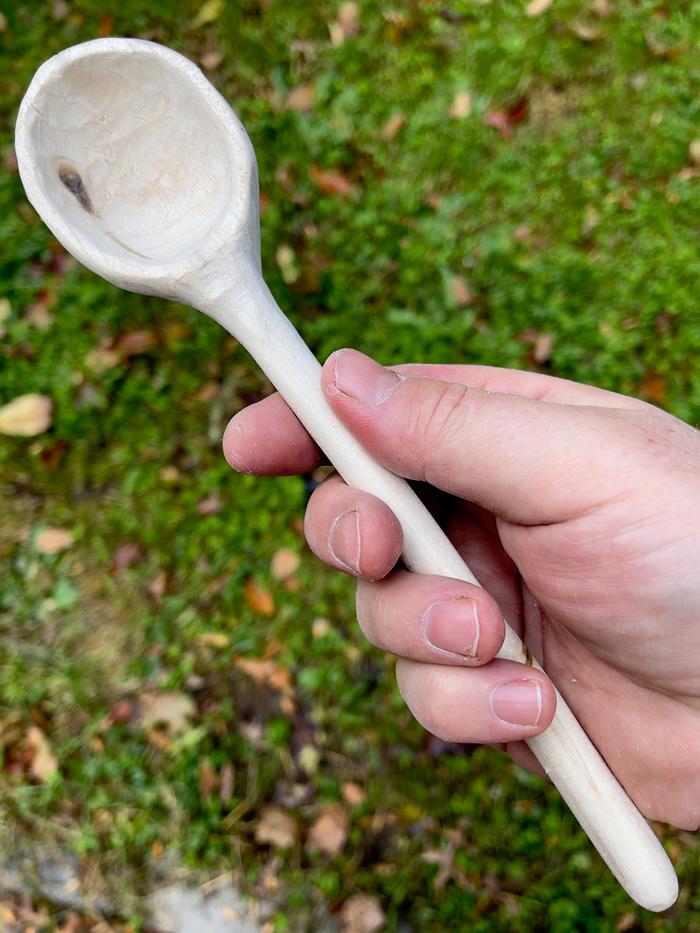 posted 7 months ago
Approved BB submission
I carved my first-timer spoon!
I absolutely love the processes of carving and sculpture. I've made other things out of wood including a whittled rabbit, and an angle-ground-and-torch-burnt-moon-boat, but this is my first finished spoon.
After some research, I decided to use sweet gum wood, a common Texas native that was reportedly both good for carving and mouth-friendly.
Some of my sources on the wood:
https://judyrobinsondesigns.com/2018/07/07/carving-sweetgum-spoons/
https://bushcraftusa.com/forum/threads/sweet-gum-useful.2431/

After searching the whole property for just the right branch, I found one that looked like it would block the walkway on a great side-limb of my favorite climbing tree sometime in the next couple of generations, and took it out with a handsaw. I carved the spoon, sanded it, and rubbed in some coconut oil and beeswax.