posted 1 year ago
Approved submission
A little wall for keeping an apple tree warm and giving a path over top on a berm.
BeforeWall.jpg
FreeStanding.jpg
Halfway.jpg 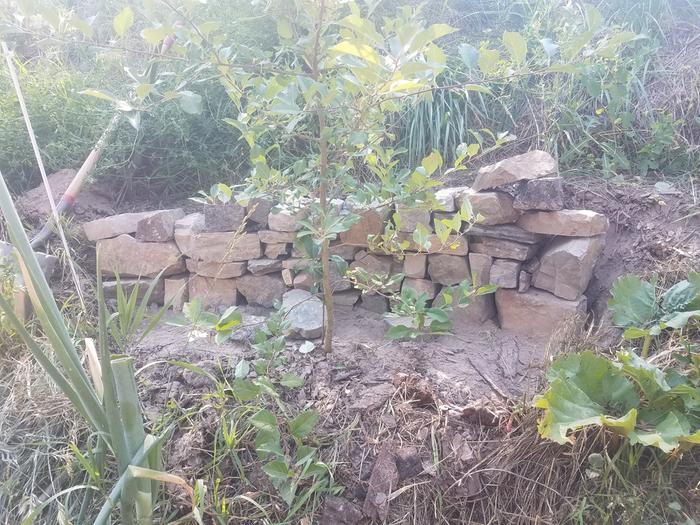 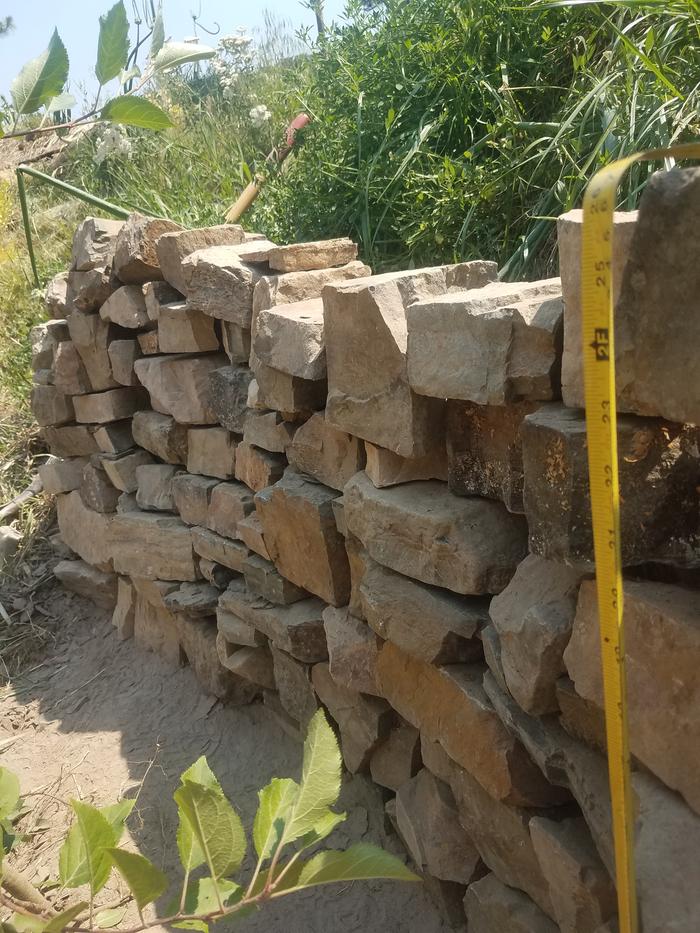 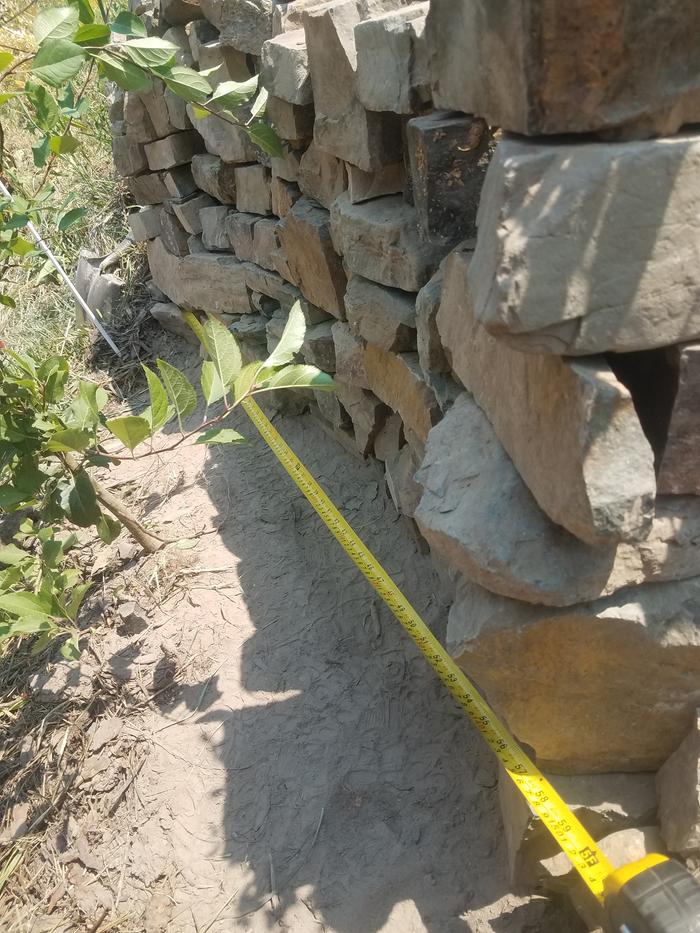 posted 1 year ago
Approved submission
Here is my submission for the Earthworks - Sand - Build a Small Stack Retaining Wall BB.

To document the completion of the BB, I have provided the following:
- Your area before starting
- Progress about halfway through, showing some of the rocks stacked and with the space behind for gravel
- Finished project

posted 1 year ago
Approved submission
I built a dry stack retaining wall to protect an apple tree 5ft up a hugelmound. I had to rebuild it a few times, but it was all a good learning experience.

Correction: pic #2 is excavated area
Pic #3 is a before pic

posted 4 months ago
Approved submission
I created a small retaining wall to use as another example for the current SKIP event. I created this in just over 2 hours today. Required photos are commented in boldface text.

Here are the supplies I had at my disposal. I also ended up with several empty buckets now full of dug-out soil. 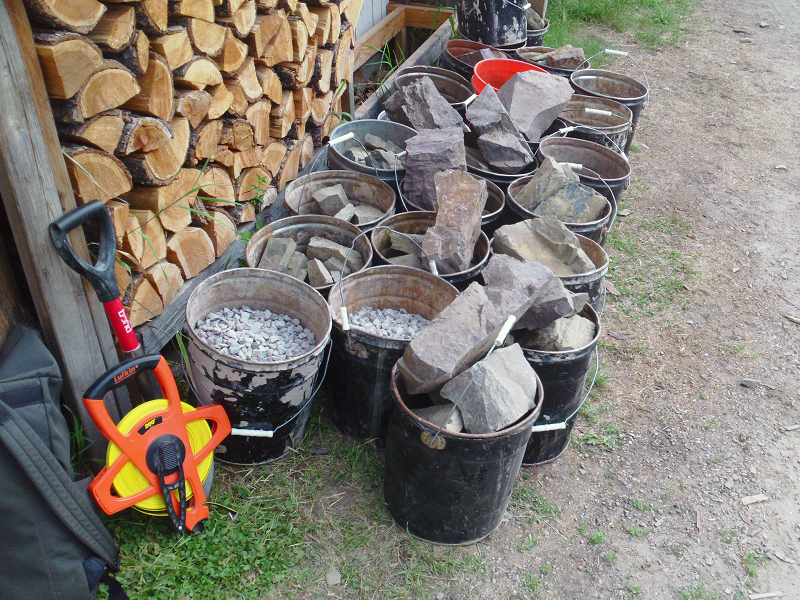 Here's the tree I wanted to protect with a finished retaining wall. There's a pathway above it, and I also wanted to preserve that with the finished effort. 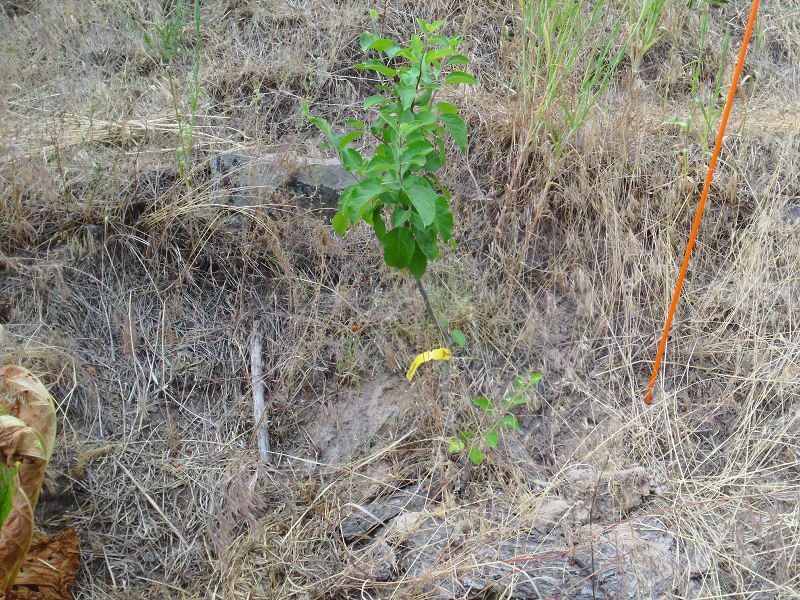 Here's the foundation, without gravel. 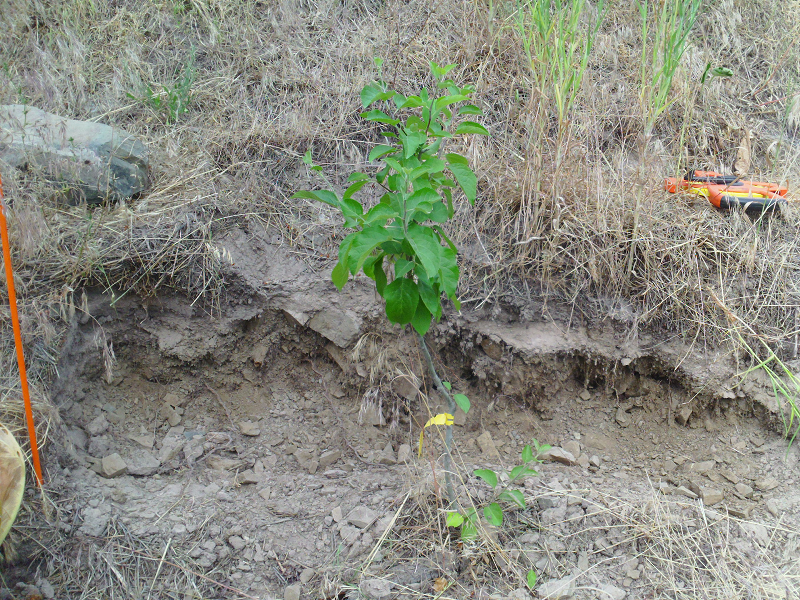 Here's the start of the retaining wall, including a graveled foundation. 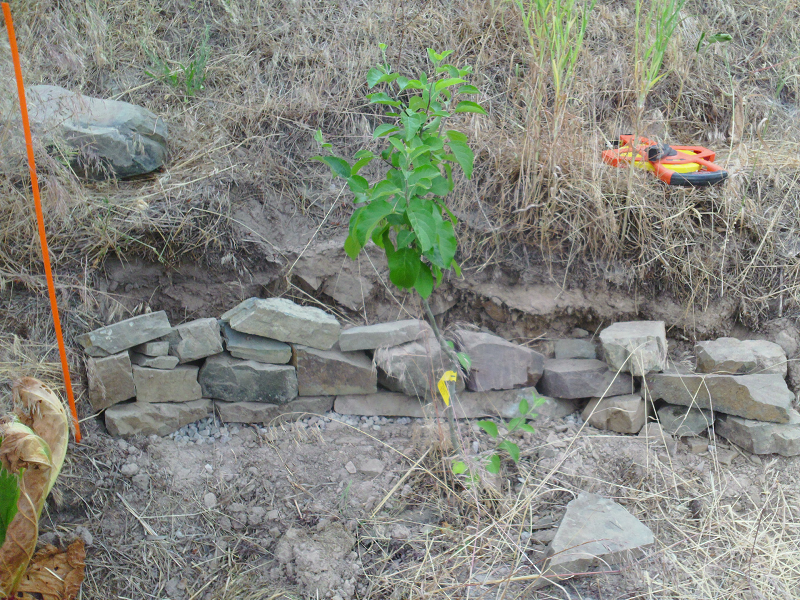 Further in process, just about ready to begin rebuilding the pathway atop the wall. 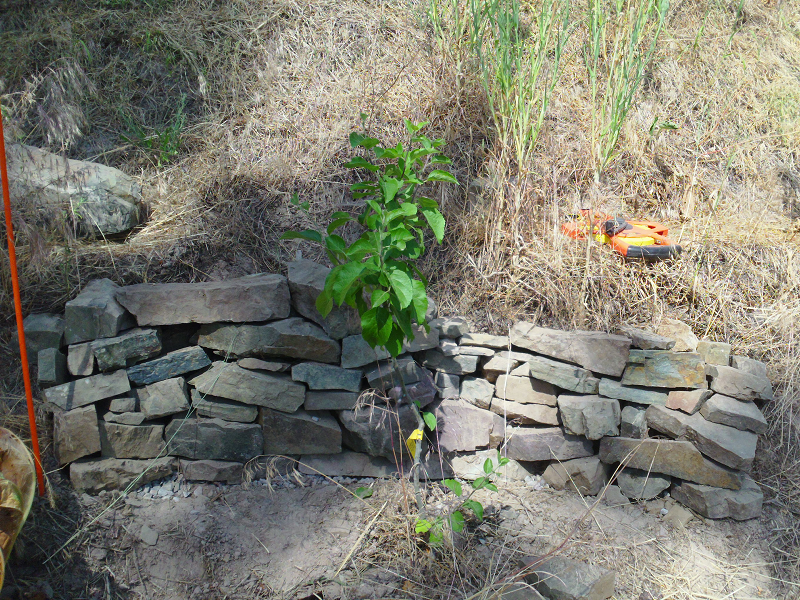 The finished wall, with the width of 4-feet indicated. 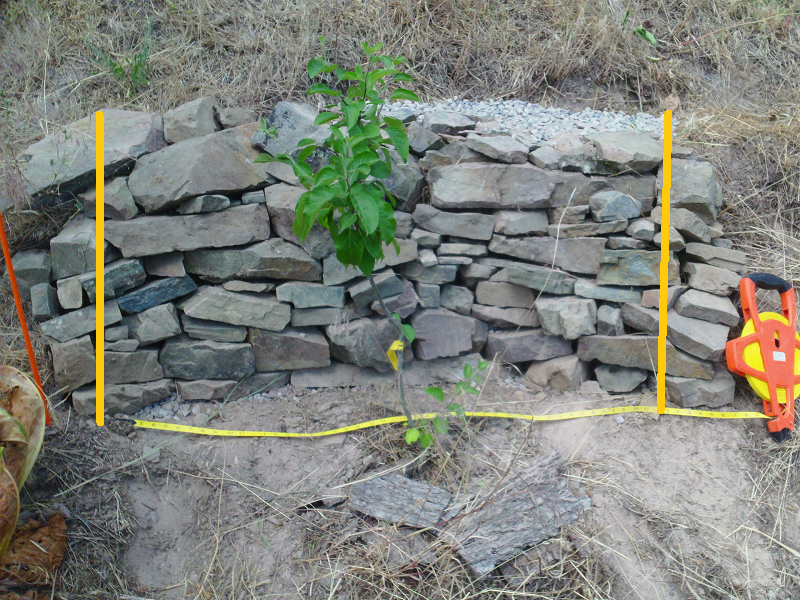 The finished wall, with the height of just over 2-feet indicated. 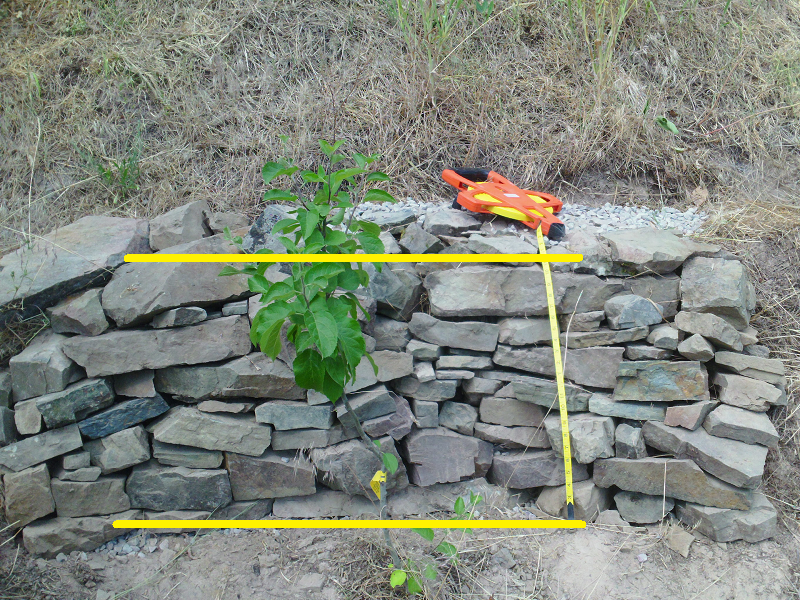 Here's an unspoiled photo of the finished wall, with the path visible atop it. 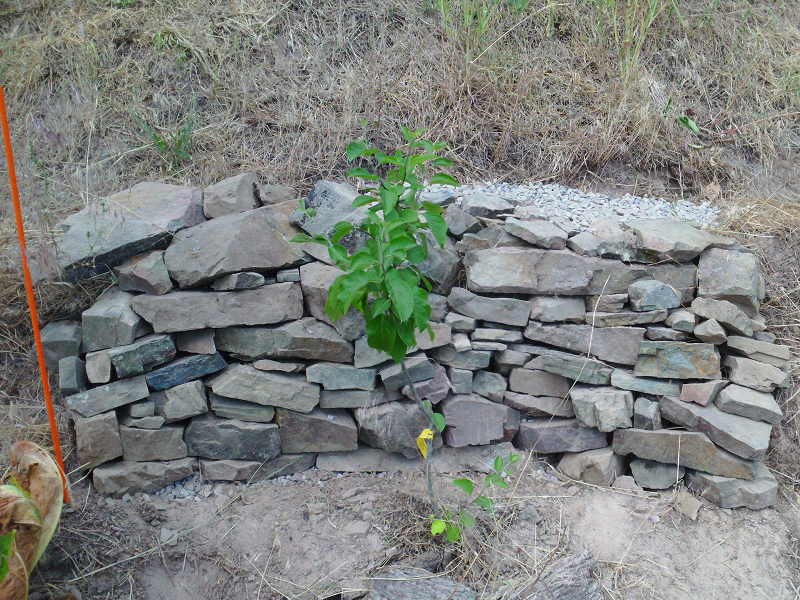 Thanks for viewing, volunteer reviewers...!

Sami Winners
Posts: 36
11
posted 2 months ago
Could an herb spiral qualify?  After looking at requirements, I can see room for improvement, but would the project itself work?

I found limestone bricks being given away for this project.  Then I trolled the neighborhood close to my house on trash day and picked up a full truck of leaf filled paper bags.  We put the leaves in the chicken coop to keep them warm and used the bags to line the bottom of the herb spiral.  I have many layers of mulch in there including bark from firewood we collected over the years, grass clippings, leaves, sawdust.  I haven't put the top soil layer on yet and am willing to rework it so it lasts longer.

posted 2 months ago
I would say so as long as you have a 2' high by 4' long section to focus upon.  And all the required pictures.

posted 2 months ago
Approved submission
My basement wall is brick sitting on field stone. The field stone is mostly below ground. For several years before I fixed the guttering, water from the roof would end up flowing through the wall and had caused considerable damage to anything wooden with in a foot of the wall. This included a workbench, tool lockers, finished walls, the basement stairs and floor boards. After ripping out most of the rotten wood and fixing the gutter, I set to, building a vapour barrier, drainage system and sump pump within the basement wall. I have built dug drains and all the water falling on the house is now channelled 20+ feet from the house, and slightly down hill, where it can soak into my soil below my fruit forest. Within the next year, I’ll set up barrels to store some of the rain water. For now, I just have to get the house ready for winter.

The basement windows are in a bad way. When we moved in, back in April, they were all boarded up and trapped moisture had caused extensive rot. There was some evidence of window wells but decades of neglect meant they were full of soil, trees and other plants. I investigated my options and decided with the work I was doing to move water away from the house and accept that water that does make it through the walls is dealt with, I didn’t need deep wells with drains. In addition my soil is 99% sand and gravel. It drains exceedingly well and we are on the top edge of a valley going down to the Hudson. We are in the lowest risk category for flood risk and the water table is very deep.

My vision is to restore the windows and add shutters. There’s evidence that they once had shutters. The well will have plants growing in containers that can be appreciated from inside. Initially, I was going to simply dig down and install a metal semi circle, the kind sold in box stores. Once I started work, I realised that I could use the resource at hand, the field stone buried where I was digging.

My wall is just over two foot high and roughly twelve feet long, in an arc. It’s stepped with a semi circular section with a radius an inch bigger than half the width of the window. Once the wall reached level with the window sill, I filled in behind with more stone and continued the wall much further back, so shutters could be fully opened, flat against the wall.

Here are the pictures which show the steps I took, including building a rough guide to aid construction. 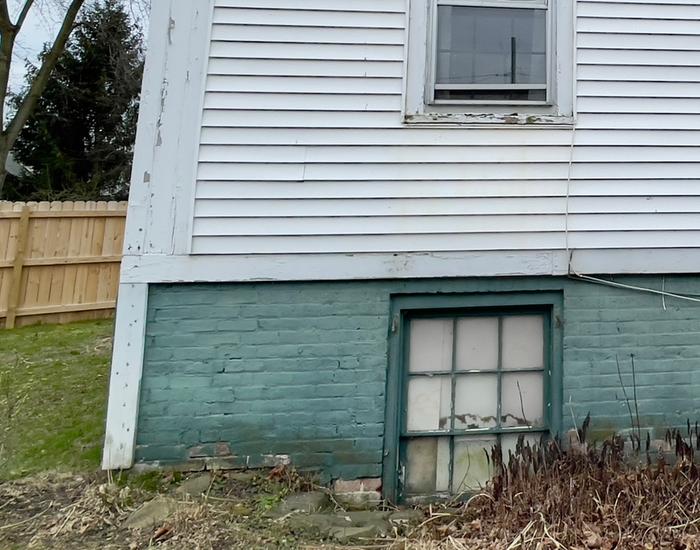 The much neglected window back in March before we bought the house. 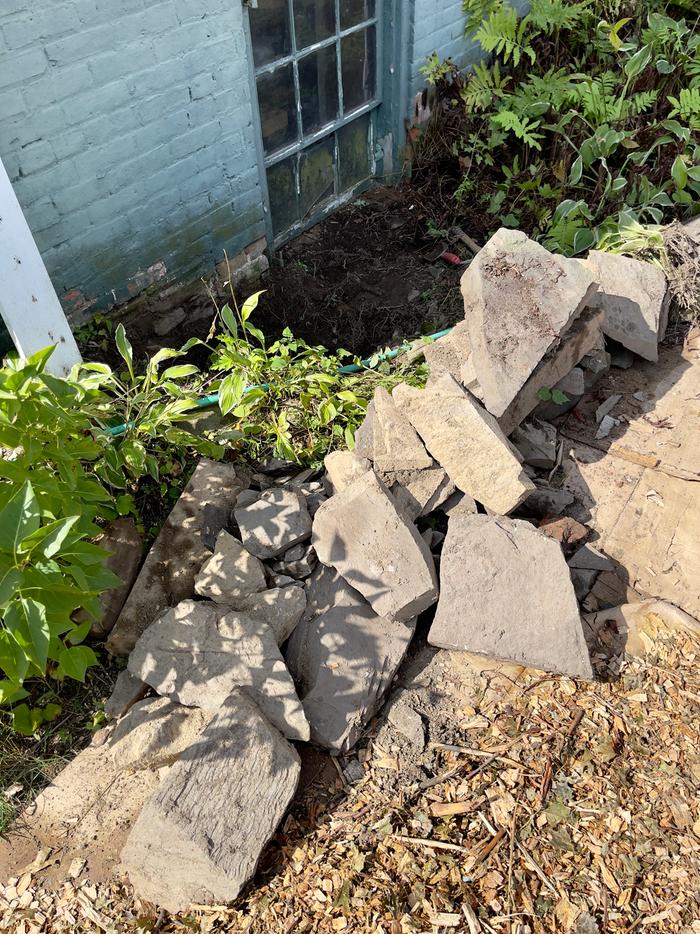 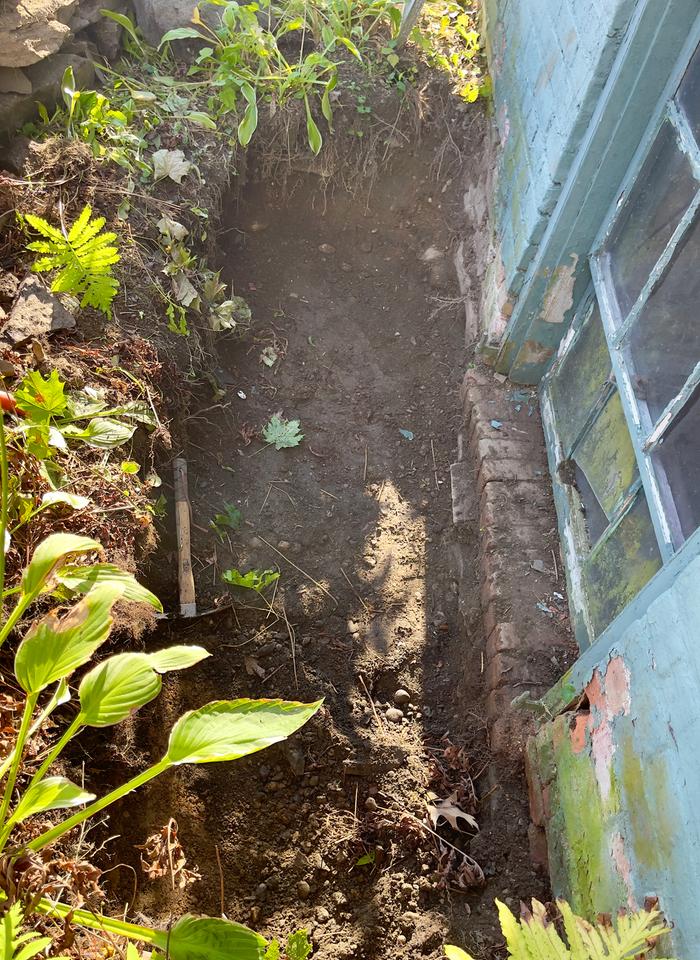 The well before stonework 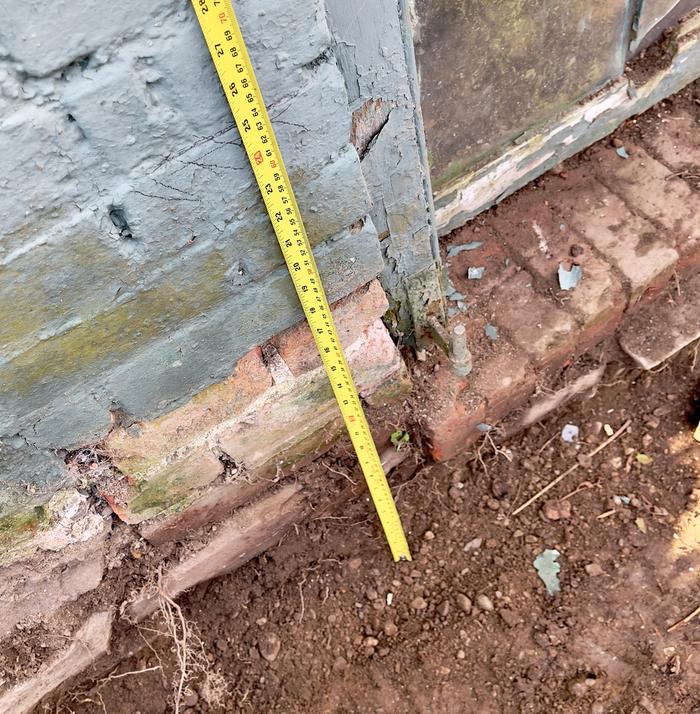 I marked a line on the wall 8 inches above ground level. I used this to check how deep I need to dig for this to qualify. In reality, I would have dug this deep anyway. 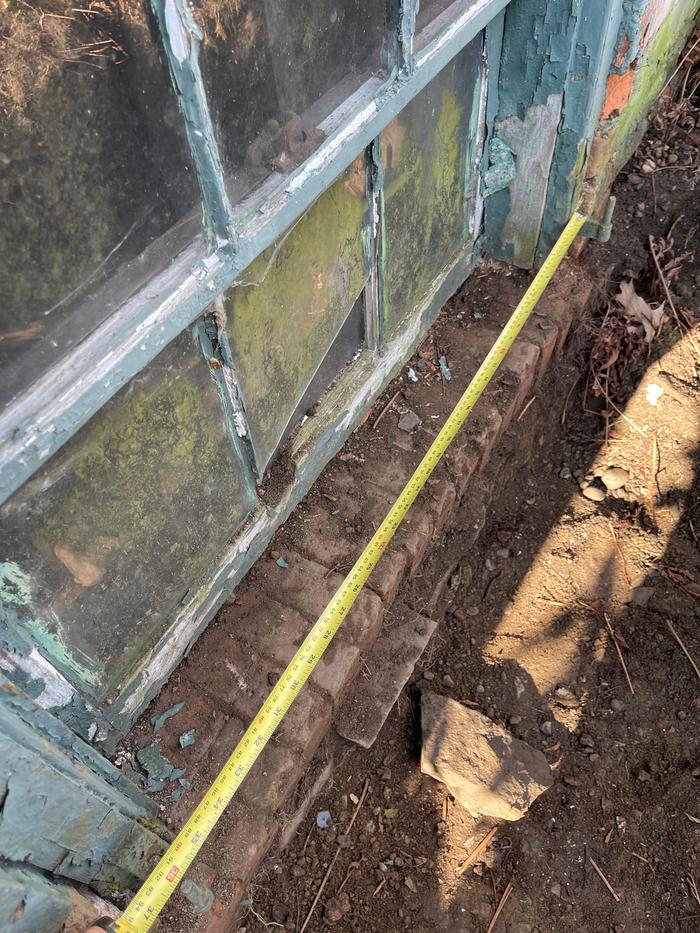 Taking measurements for my building guide 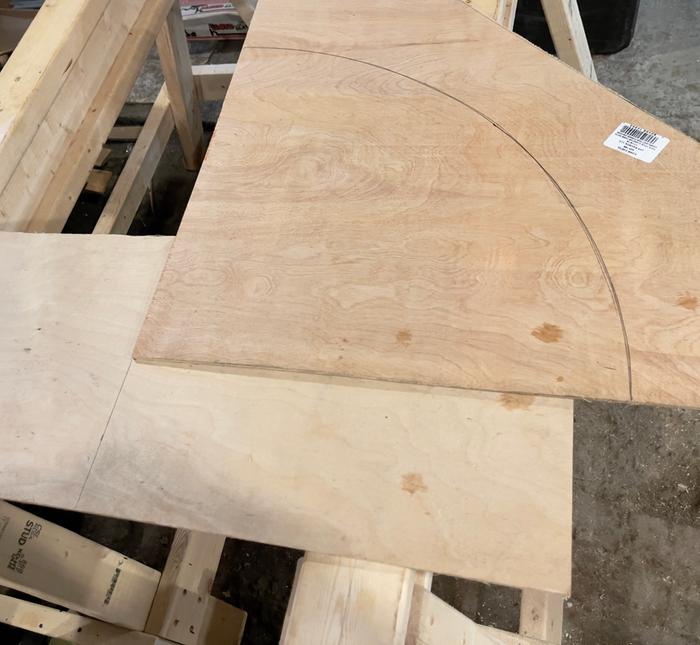 Marking up, cutting and constructing my guide from salvaged plywood 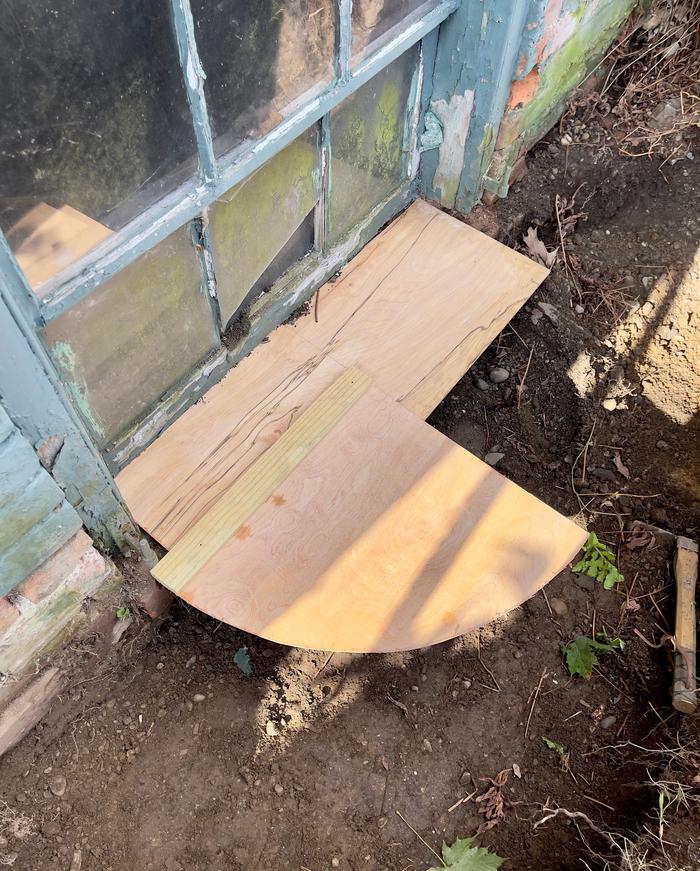 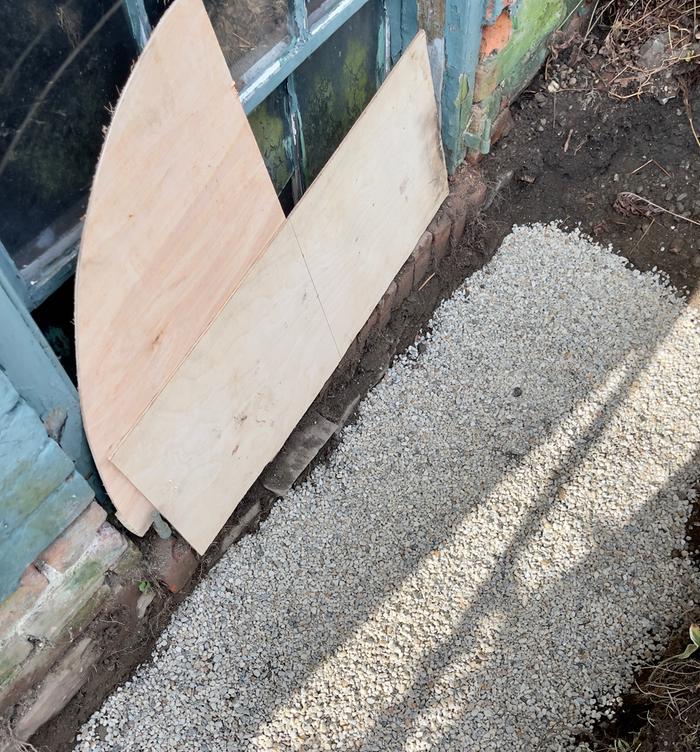 Sharp gravel as per BB requirements 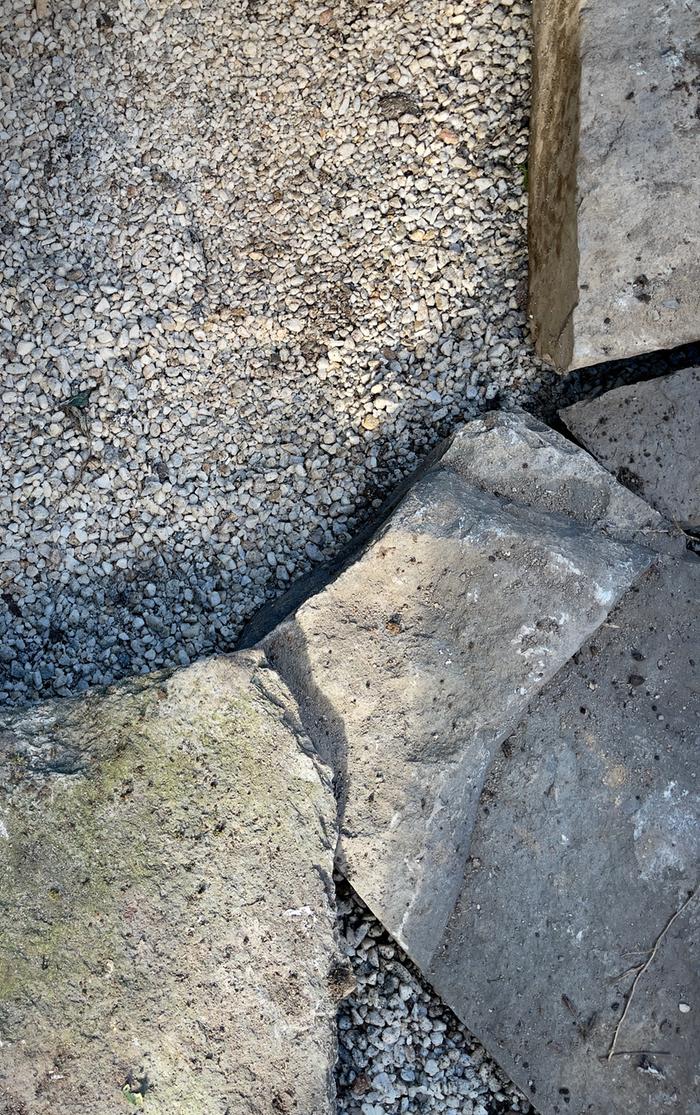 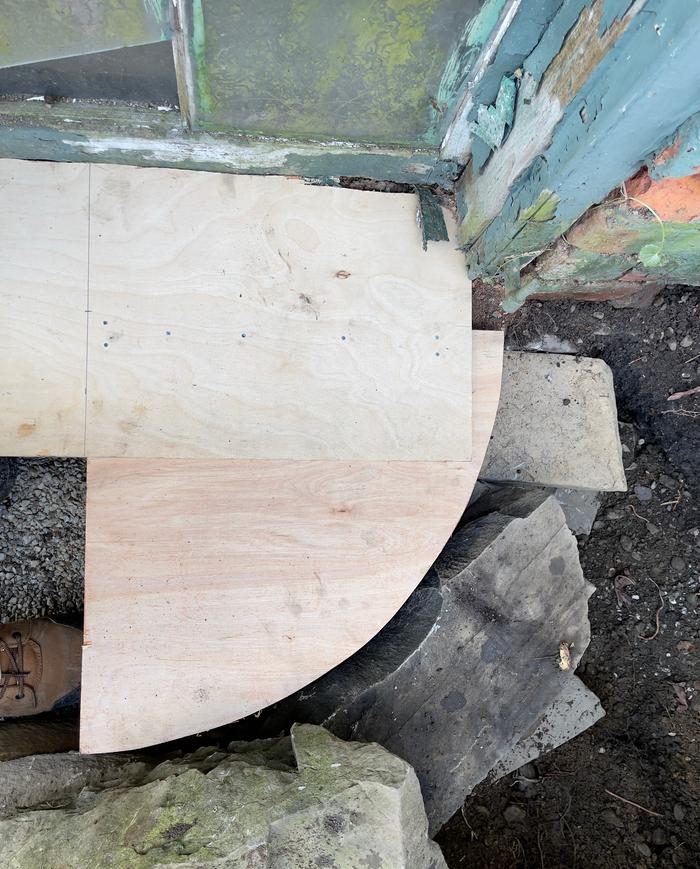 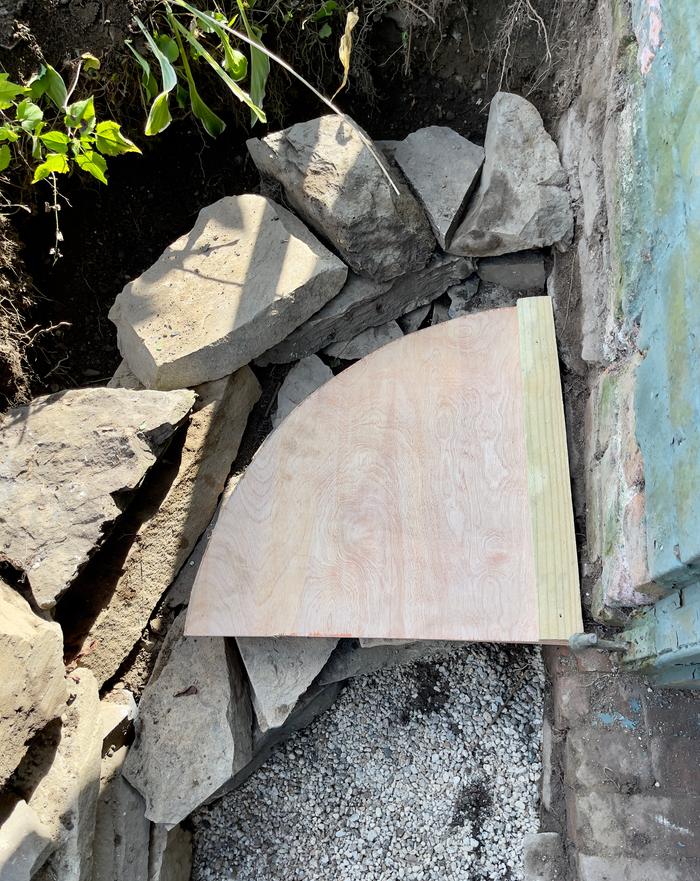 Checking room for shutters to open with second guide 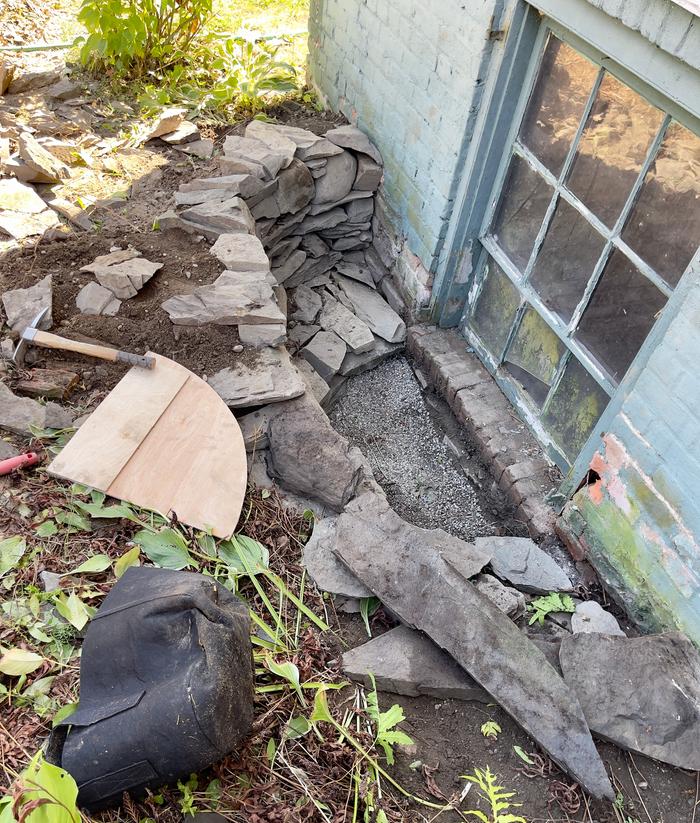 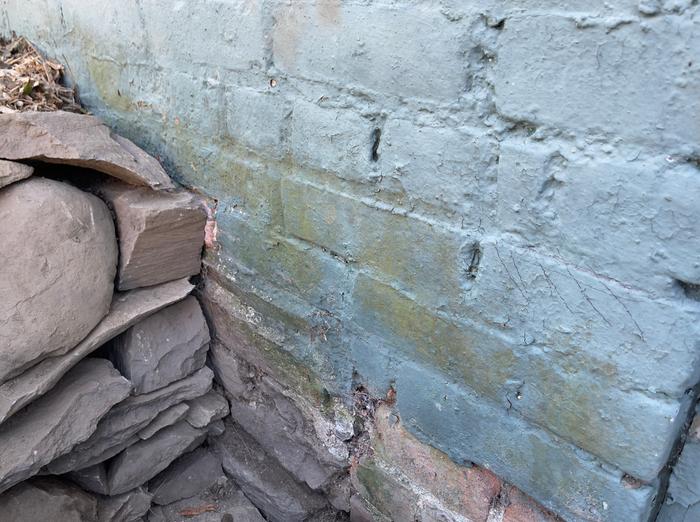 Finished wall level with course at 25 inches high, showing 2 over 1 build next to existing wall 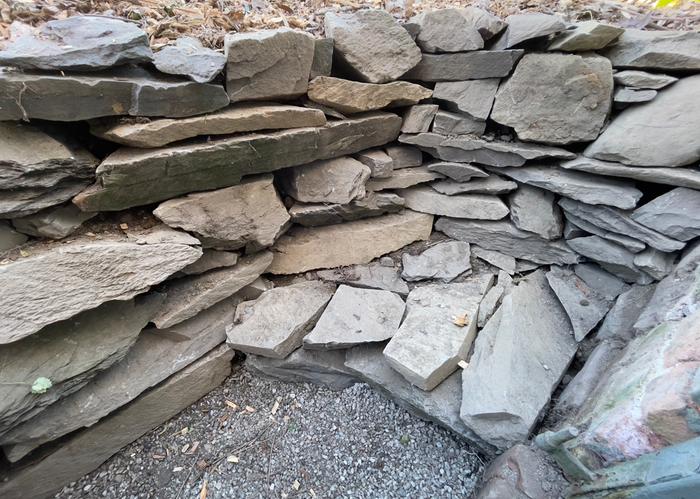 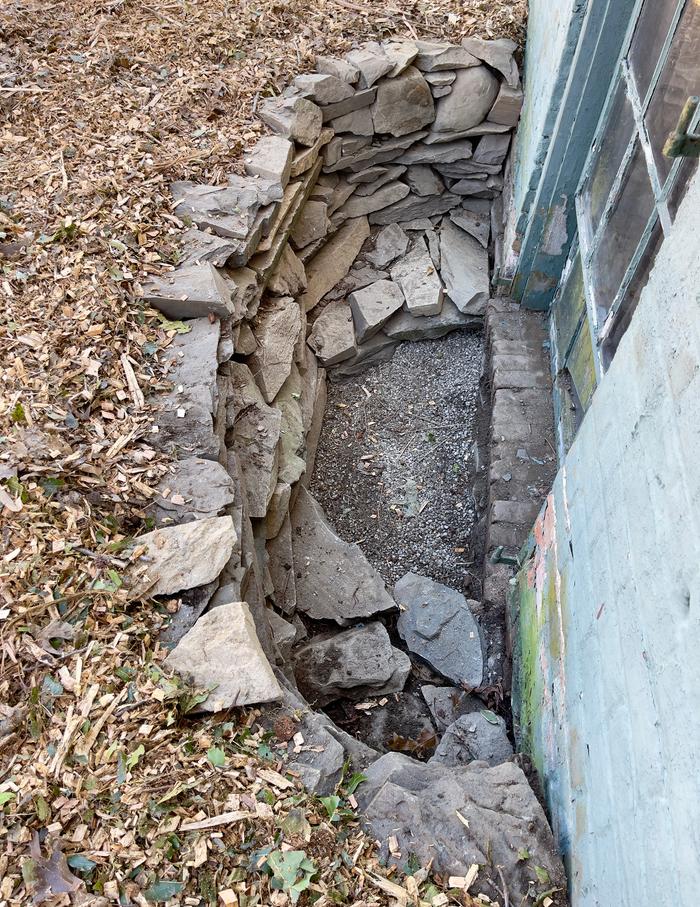 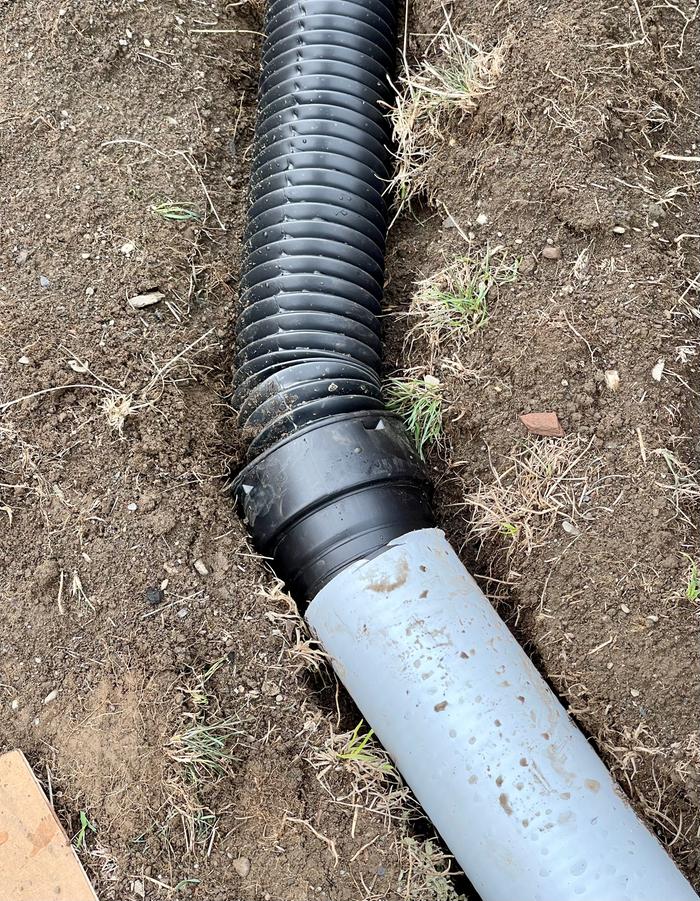 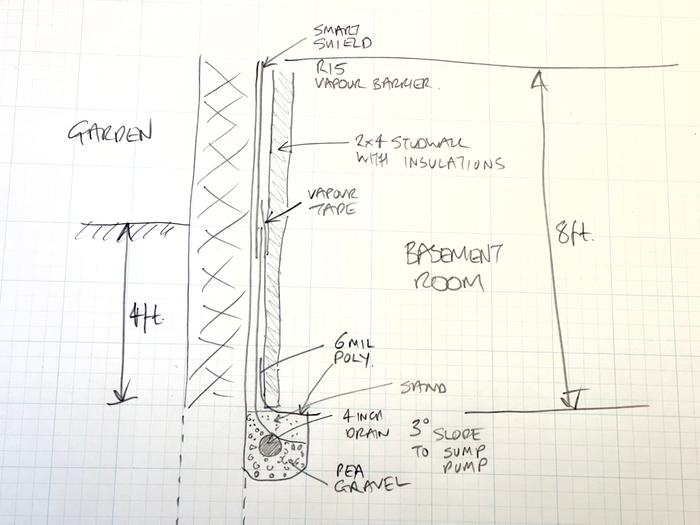 The plan I have implemented on the inside of the basement 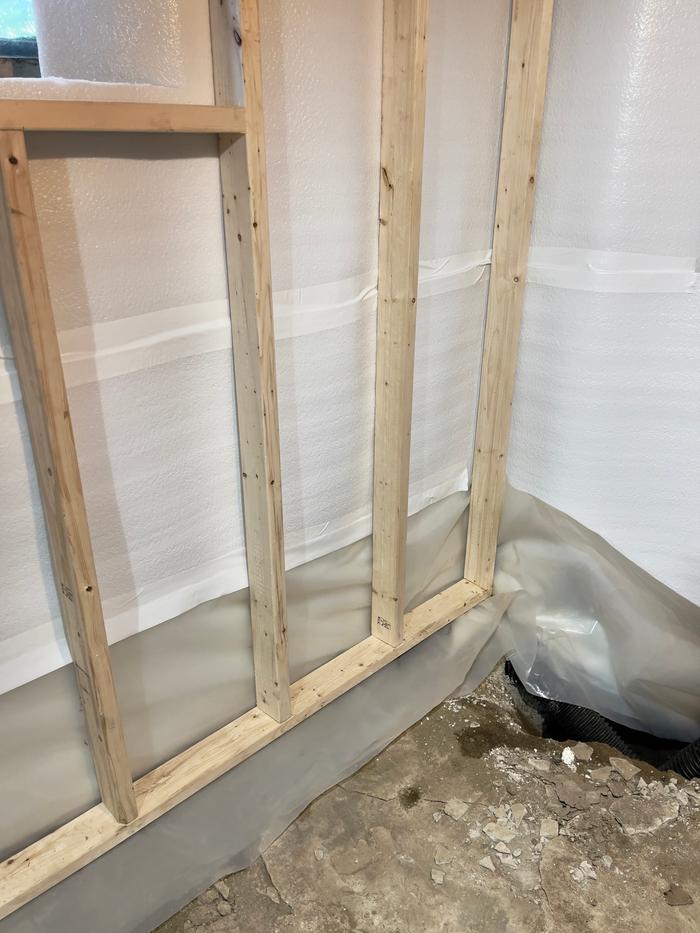 This was hard work! I probably spent 12 hours over three days on the outside part and weeks of planning and building on the inside part. A great physical and metal challenge.

FYI - The drainage system taking water away from the house can be seen here:
Improve gutter badge bit