Jay Angler flagged this submission as an edge case BB.
BBV price: 0
Note: is it a minimum of 5" by 18"? If not, make a second one to add to this one.

posted 1 year ago
Jay, thanks for checking my submission. As I'm no longer at Wheaton labs, I don't have a means of measuring it and lack the tools to make another. I'm going to convert my submission to a normal post, and resubmit at a later date.

Malek Beitinjan wrote:Jay, thanks for checking my submission. As I'm no longer at Wheaton labs, I don't have a means of measuring it and lack the tools to make another. I'm going to convert my submission to a normal post, and resubmit at a later date.

Thank you for your understanding Malek. Is there anyone at the lab we can ask to check it? Maybe Ash knows how wide his bench was for instance?

posted 11 months ago
Approved BB submission
My linseed oil finally arrived!  So I made a fourth sign, and touched up the burndoodled old ones which I had previously made from branding a location and then improving on the branded location.  As expected, they were degrading in the sun.  But now I have the means to make them last a little longer.

Its purpose is to serve as a (mobile) reference marker for the expanding Kinder guerilla garden, which I intend to publicly 'launch' later this month and open up to the neighborhood at large.  Any time I meet new people in the garden, I like to show them all the fun stuff growing over there, and I encourage them to freely harvest anything or plant something.  So I also want this sign to encourage people to join in, to plant something, tend something, and/or harvest something.


I used a few coats of LinSheen raw linseed oil, and I look forward to using it over the next couple years, and seeing how well it preserves after 10 months or so.

posted 9 months ago
Approved BB submission
I made a sign!

To complete this BB, the minimum requirements are:
- At least 5" tall by 18" wide
- Some means of hanging or posting the sign
- No treated wood
- Lettering and images are burned
- Must finish with tung oil or linseed oil (or else the burned image disappears)

This was so much fun! So pleased this badge sent me down this road.

I had a scrap piece of 1 x 6 that had a bit of the bark on one end. It was 20 inches long and between 5 and 5 1/2 inches except for the one corner - anyhoo, there's at least 18 inches that is more 5 inches or wider, so meets the requirements.

My garage is my workshop, junk yard, bike shed and the place I dry herbs. It's my MAN CAVE!

I played around with fonts and then printed out the letters as a guide. Then I started burning out the letters. I had some linseed oil from a previous project so gave it a coat.

The sign is now hanging above my the door to my Man Cave.
IMG_3816.jpeg 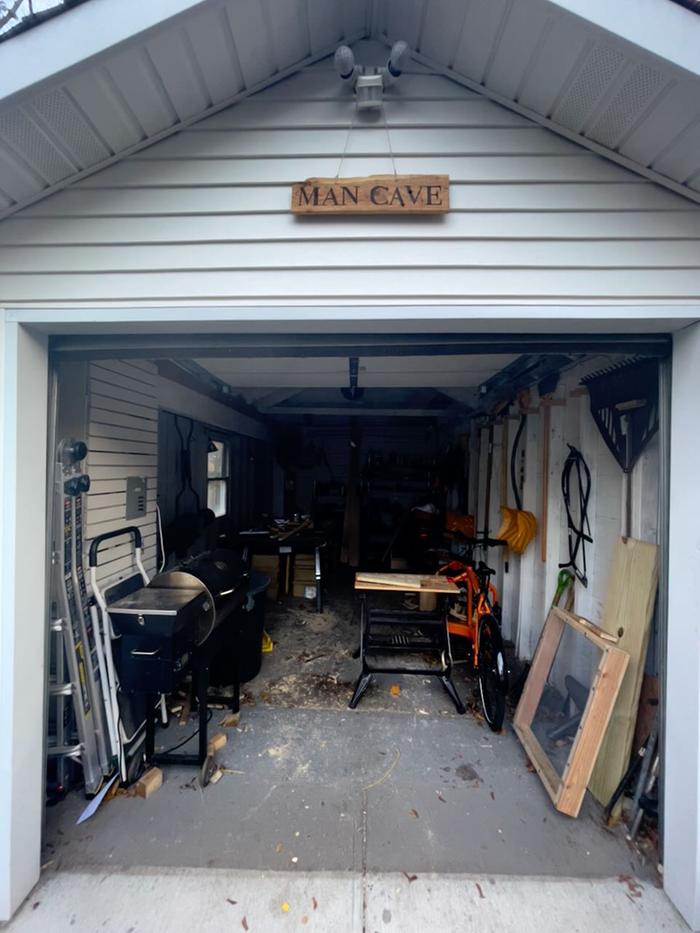 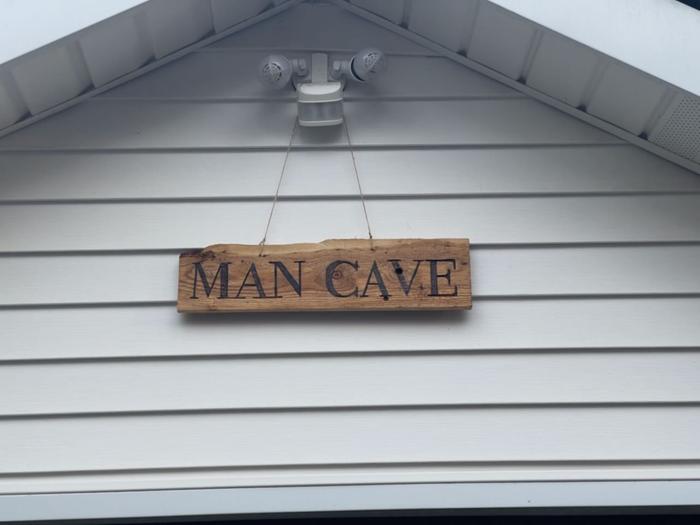 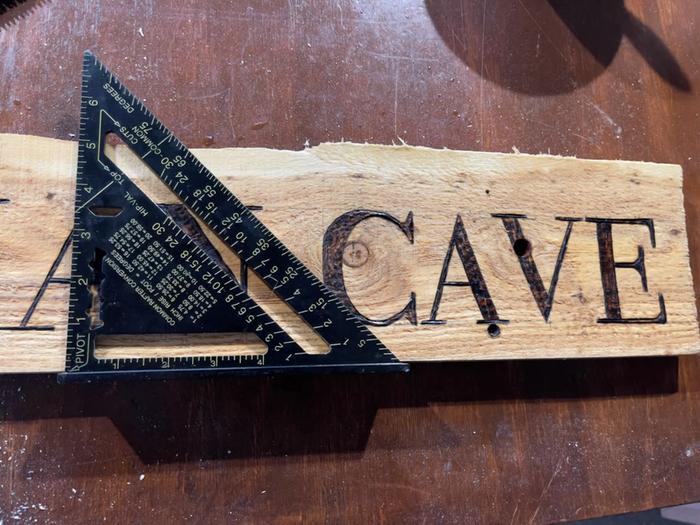 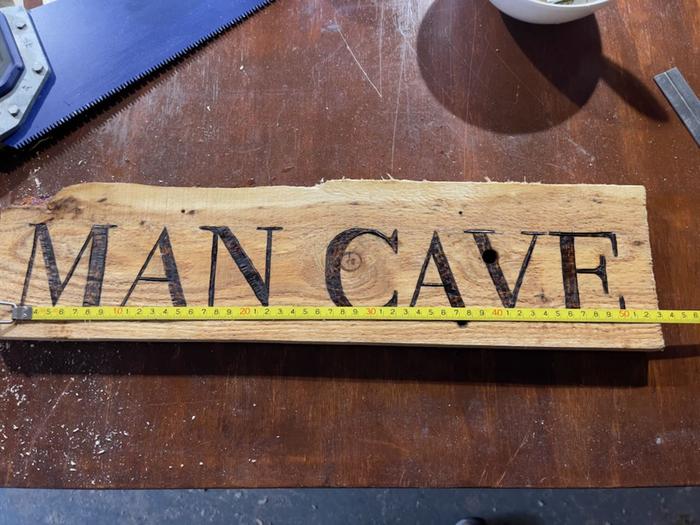 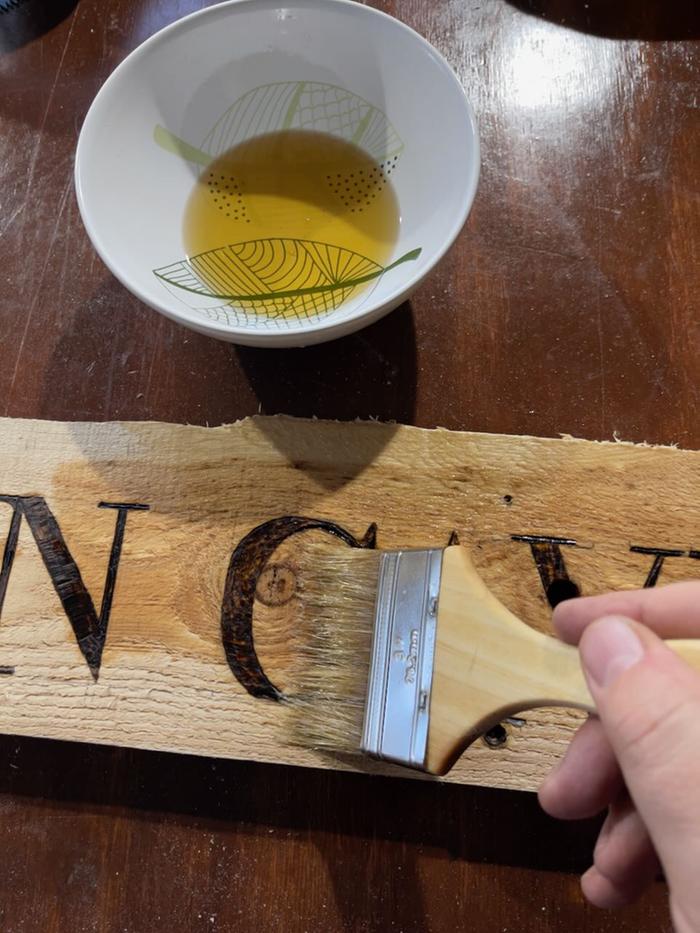 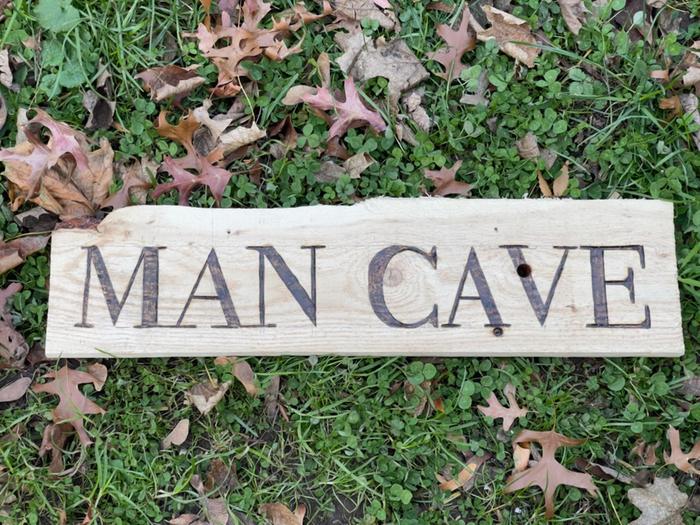 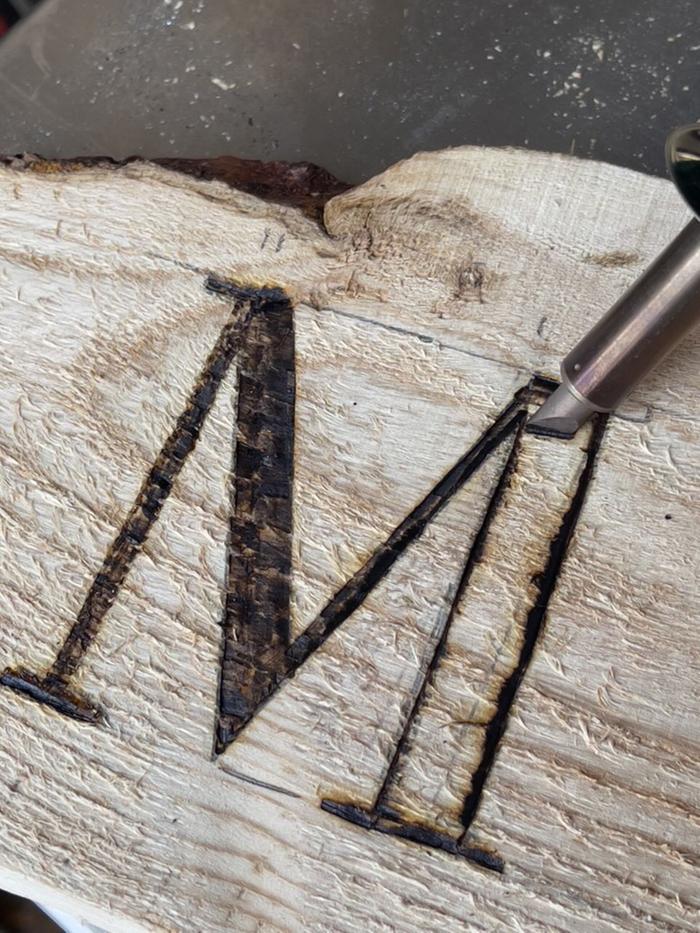 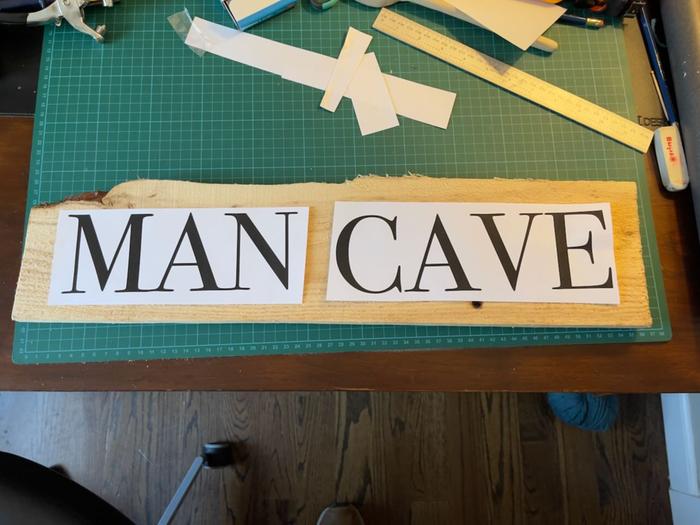 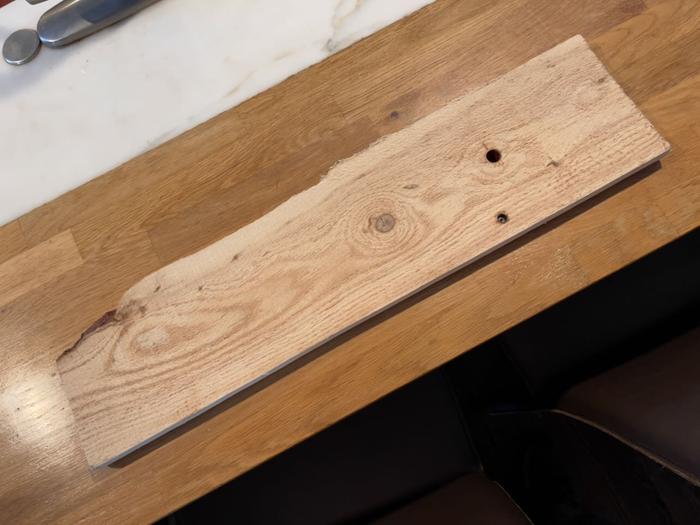 Jay Angler approved this submission.
Note: A hint, Edward! It helps the cheap staff is you post the pictures in the approximate order the instructions list them in. Thanks!

posted 5 months ago
Approved BB submission
What do you think, staff? Maybe it's time to update the cover photo ;]
blank-lumber.jpg 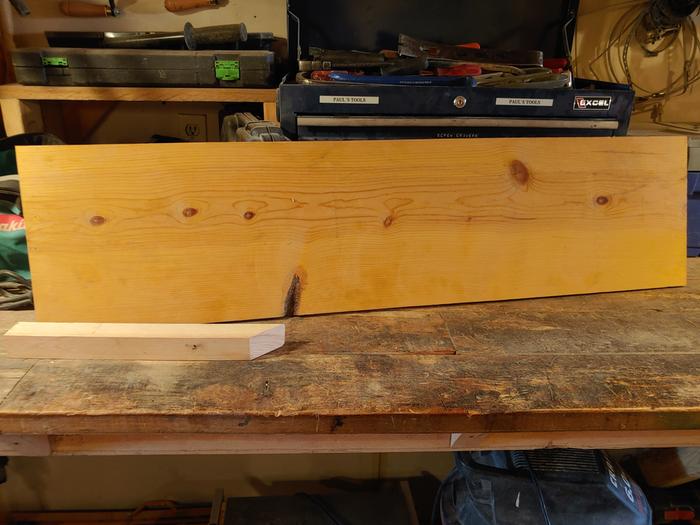 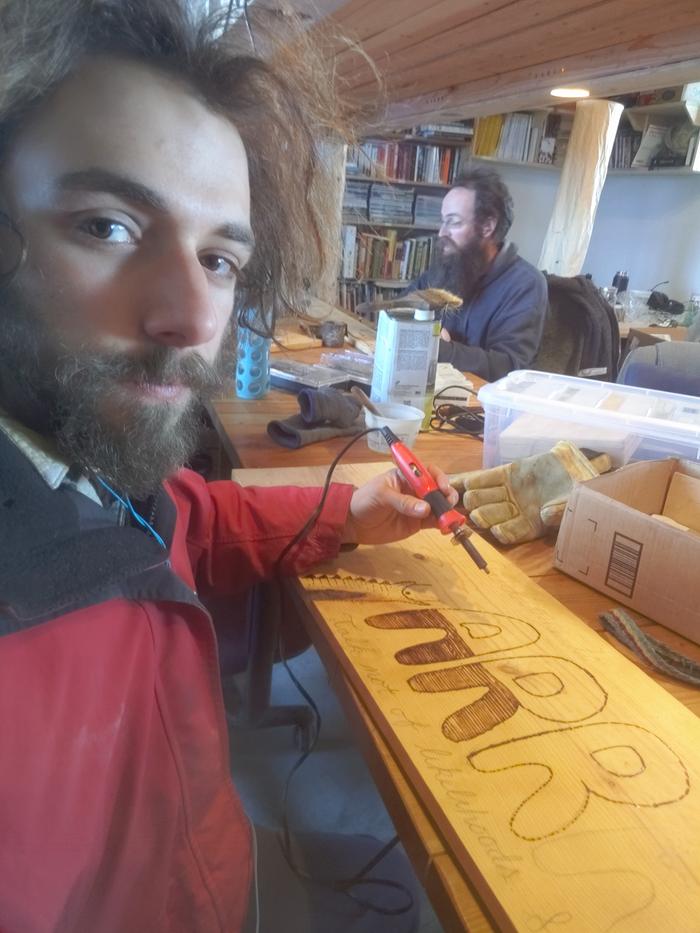 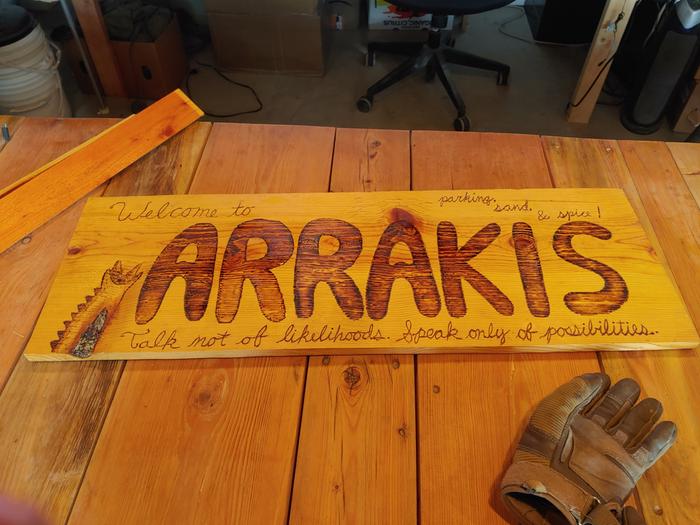 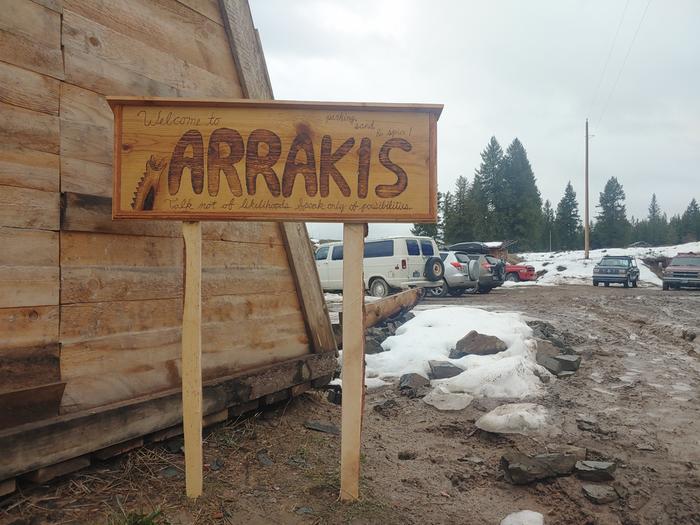 Check out my Bootcamp Journal: Building and Growing at Wheaton Labs in 2022

Someone approved this submission.
Note: Nicely done - I like large letters for easy reading.

posted 4 months ago
Approved BB submission
I made the sign from a piece of old floorboard that was about the right size for the requirements. I then added guidelines, drew on my lettering and set to work. I found this harder than I expected to - it took a lot of time to burn in the design. Perhaps my soldering iron isn't really up to the job! After 3 sessions of about 20 minutes each (1 hour total), the burning was complete and I lightly sanded the surface to lighten it and remove any guidelines. I used tung oil to finish it.

I made legs from a piece of split oak branchwood, neatening them up using the old planer and nailing them to the sign. Oak is very durable, even in the ground, and I suspect it will last a decade or so. 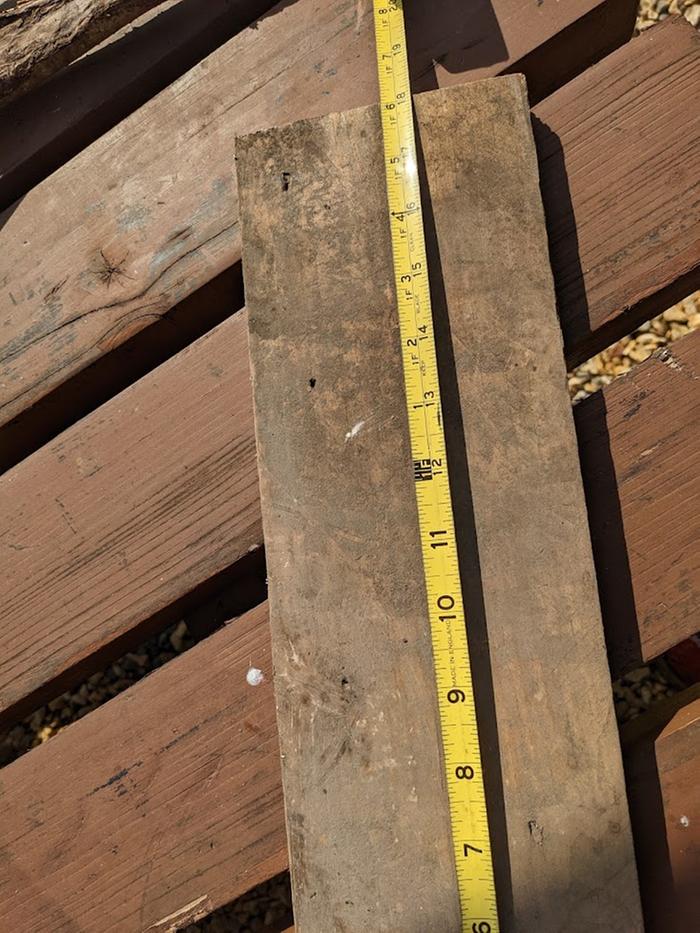 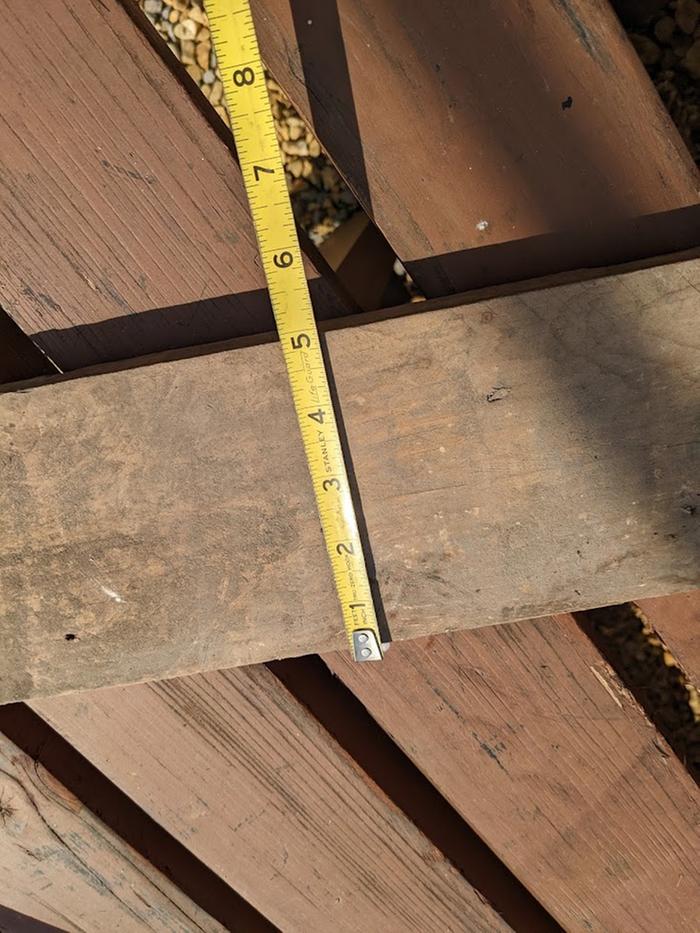 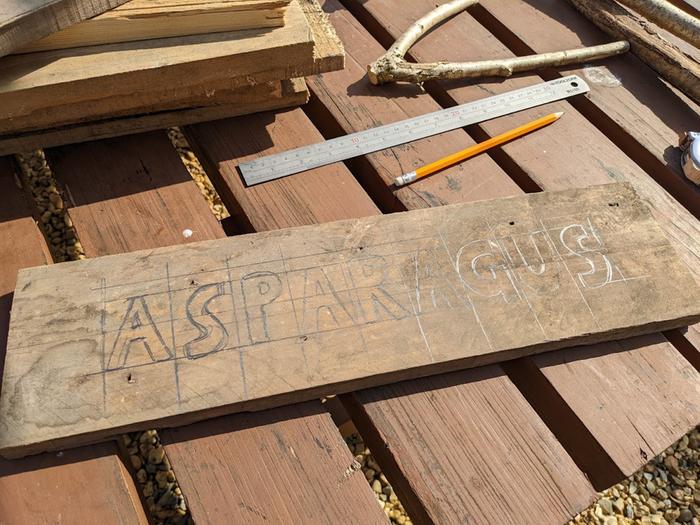 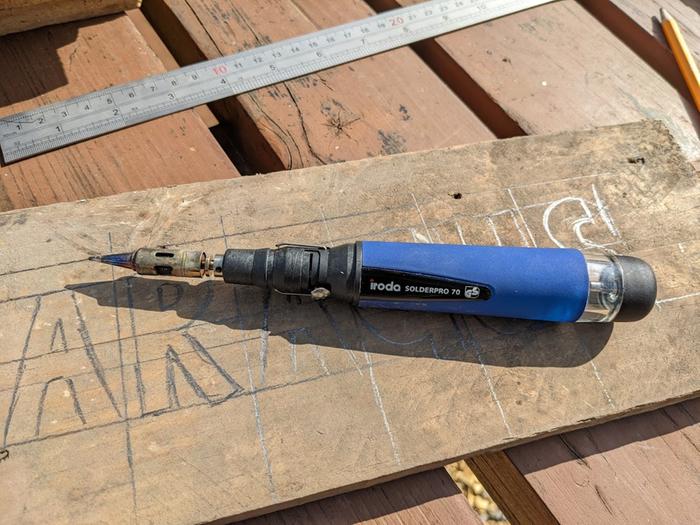 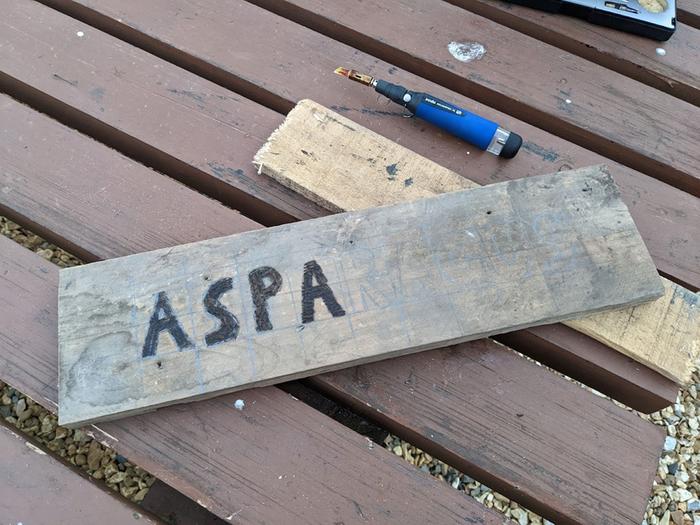 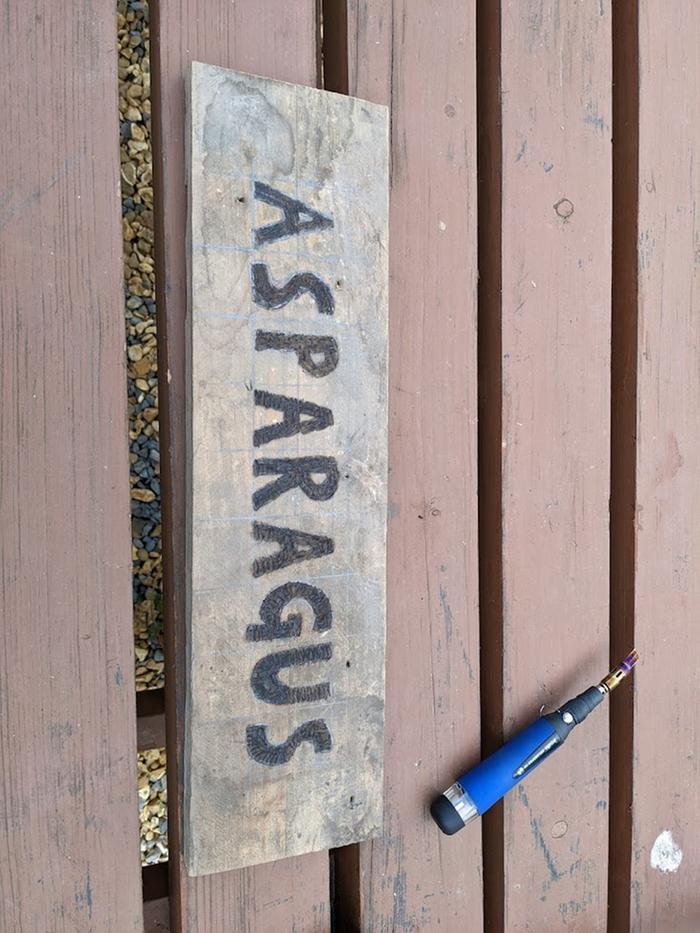 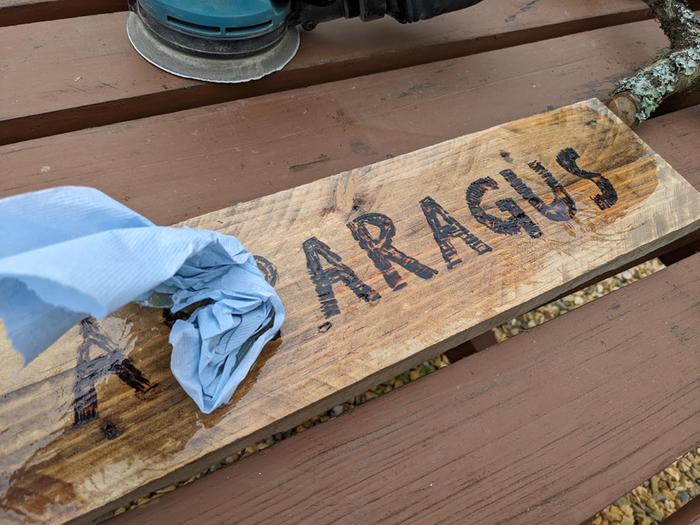 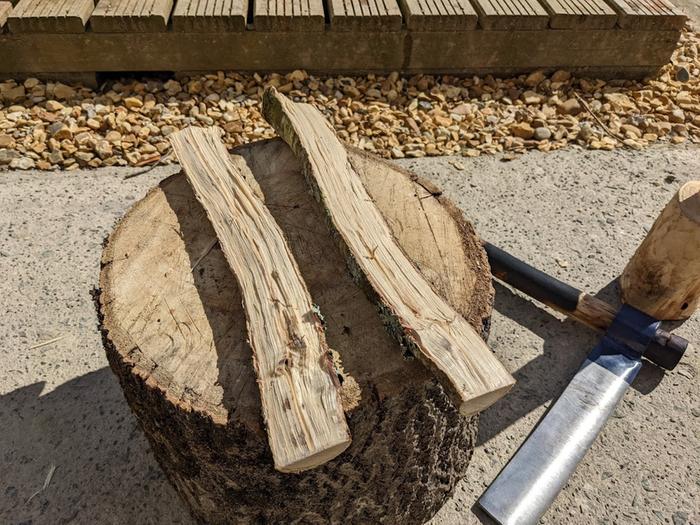 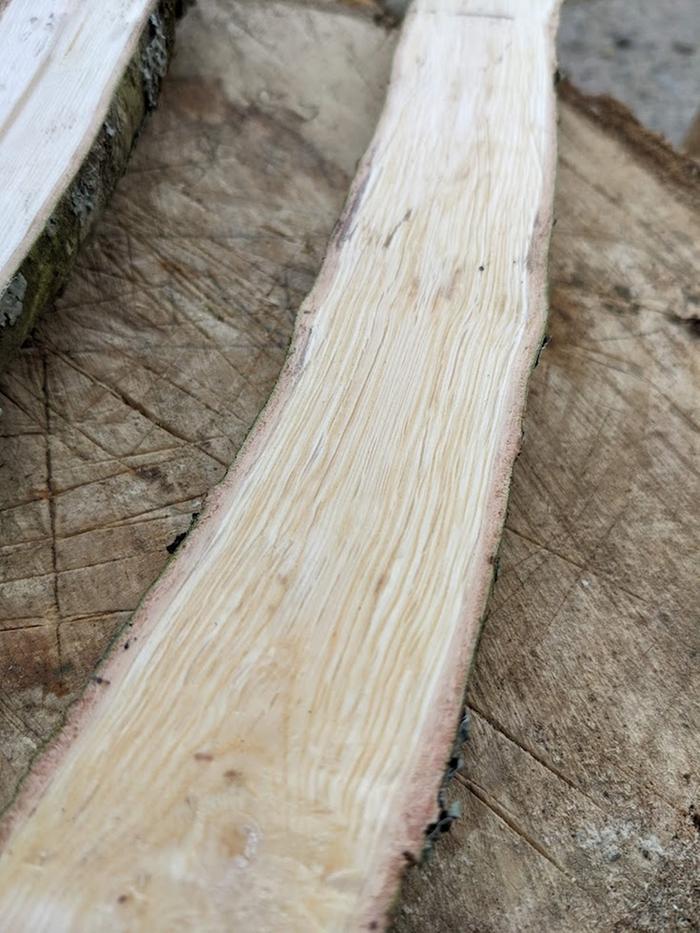 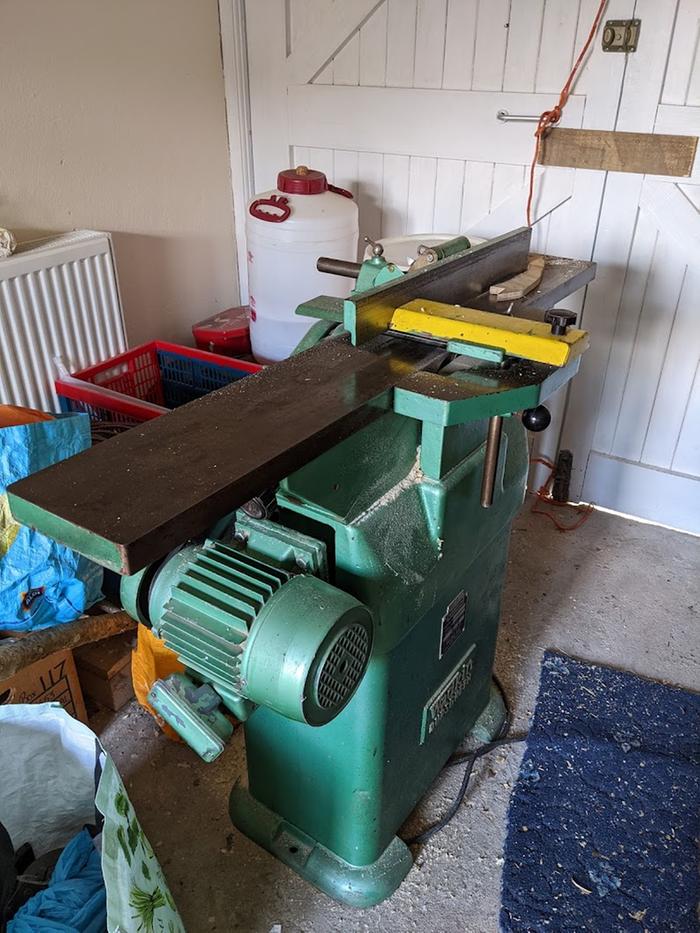 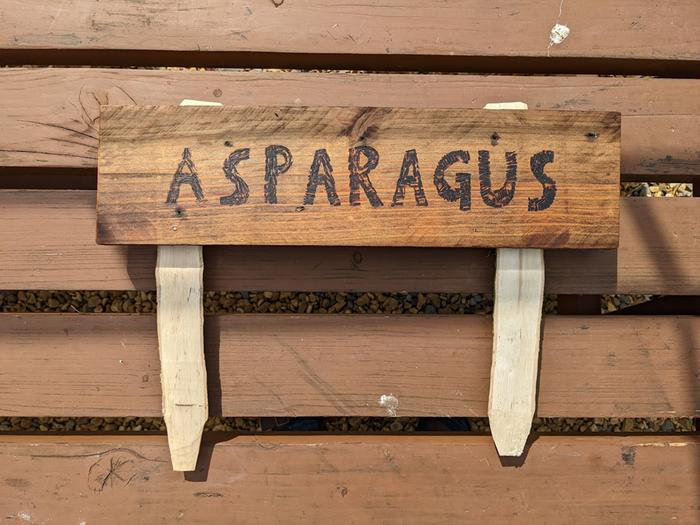 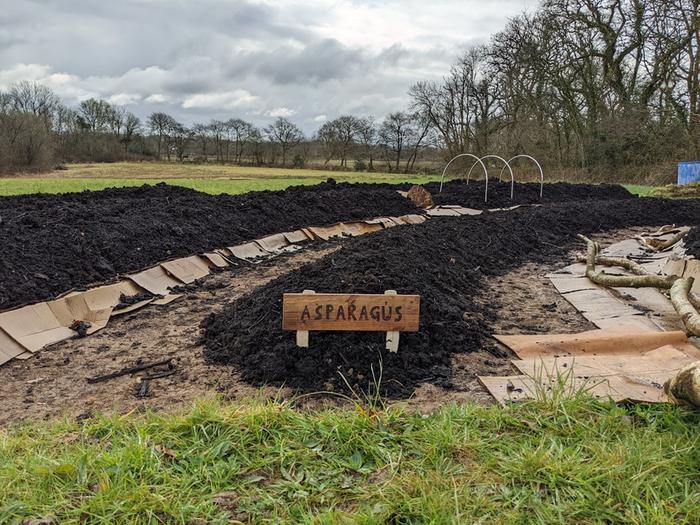 Small-holding, coppice and grassland management on a 16-acre site.

George Yacus approved this submission.
Note: Can't wait to see all that asparagus grow, too!