posted 1 week ago
I'd like to introduce Lily.  She is a working sheep who was born in the spring of 2009, first bred in the fall of 2010, and has faithfully provided wool and lambs over the years.  This is a photo essay of her life as I share some of the highlights of the past 11 years.

Lily and her brother Joker were born on April 1, 2009.  Their mom, Dolly, is what is called a "natural color" sheep - as in not white.  Dolly's wool was dark brown with some sun bleaching and she can be seen behind her lambs in Lily's first photo where she takes center stage. 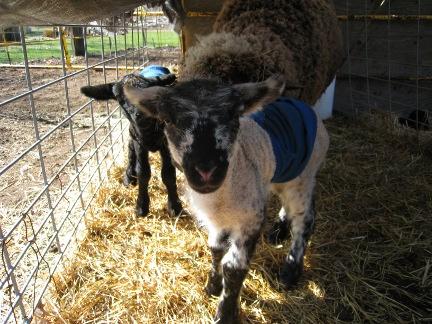 Lily and Joker are enjoying their first spring together. (2009) 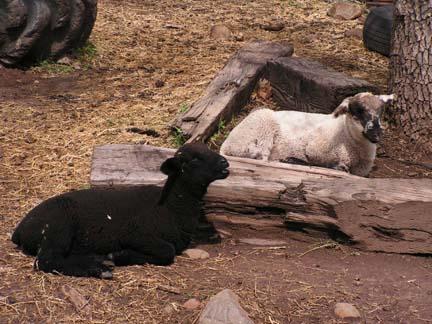 Fall 2010: Chaucer has strong Suffolk sheep traits and he joined the ewes for his fall fun.  He and the other males are kept in a separate pen for most of the year. 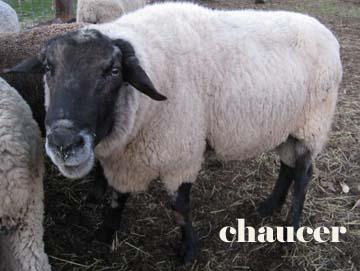 February 2011: one of our big snowstorms hit and the sheep are like, "What's your problem, I'm plenty warm!"
Luna is facing us on the left and Lily is facing away from us. 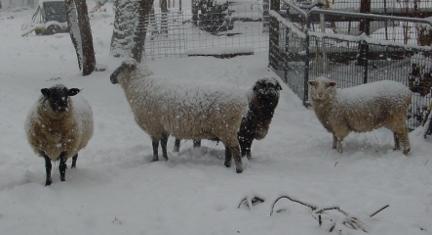 Lily wasn't phased at all by the snow and gave birth to her first lambs two months later. 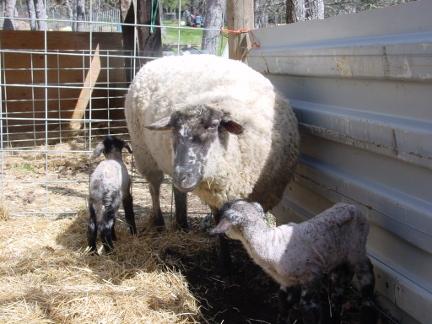 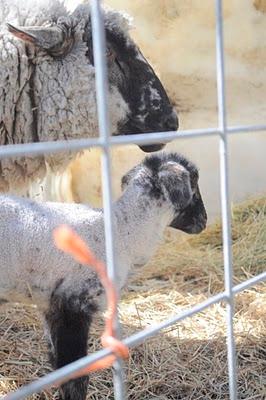 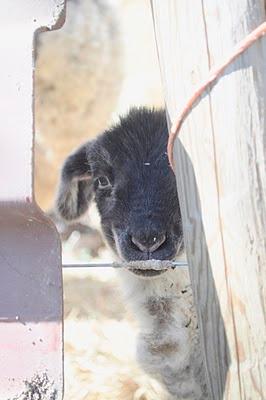 February 2012: Lily with one of her lambs (whose tail is waging) 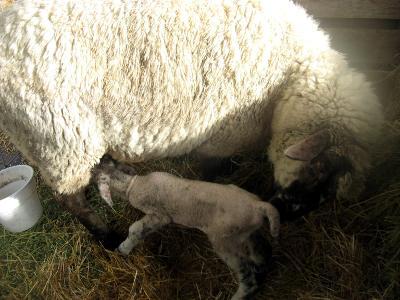 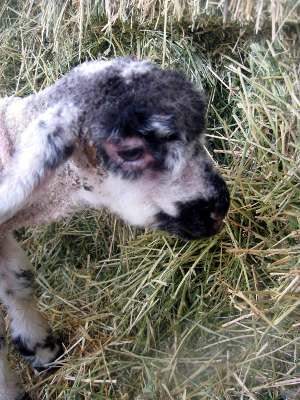 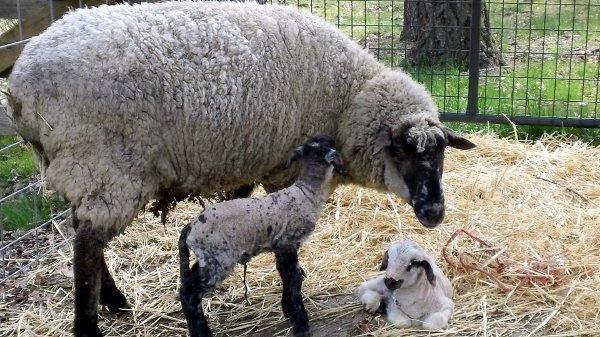 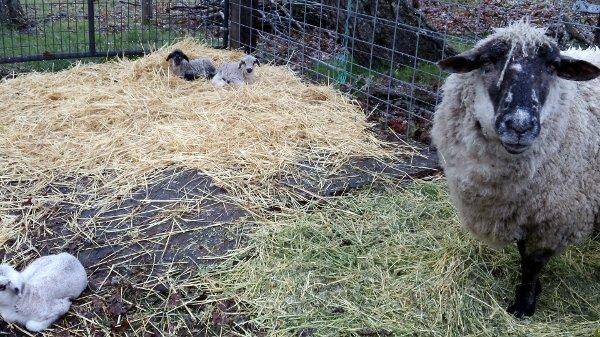 In Winter 2013-2014, Chaucer stopped eating, stayed far away from the other sheep, and even tried to escape - something he had never done before.  With his passing, his son "Jr" took over his duties. 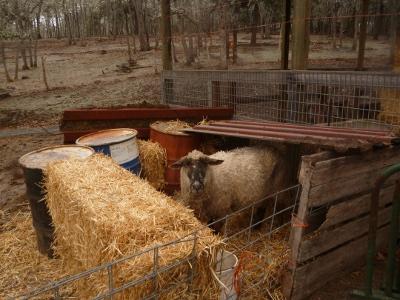 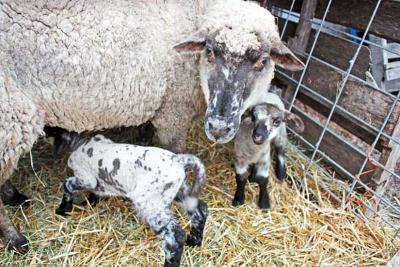 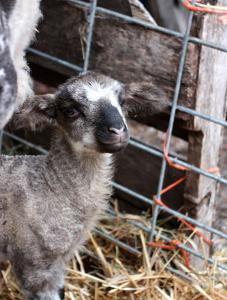 2015 & 2016 The combination of Chaucer and Jr leaving the flock and previous culling decisions left us without a ram and we decided to hold the flock size and focus on improving our pastures.  By the fall of 2016, I had taken on a leadership role for the sheep program and a supporting role for the goats.   We were down to two ewes: Lily and Penny.  Lily was reaching middle-age and if we continued down the path of no breeding then it was likely that her genetics and the landrace traits that had been built over the last 20 years of raising sheep at Windward would be lost.  Lily and her daughter Penny spent the fall of 2016 with a Cormo ram we borrowed from a good friend of ours.

2017 Lily had two boys and Penny had two girls and everybody was pure white except for Ruby who had several small reddish-brown markings on her face and ears.
All four of the little ones stayed with the flock for a few years as we looked at the qualities of the fleeces and the personalities of the new additions.
Lily with her two boys, Archimedes and Little Nickle  - just hours old and enjoying the warm barn. I couldn't find a photo of Penny with her girls (Ruby and Tuppence). 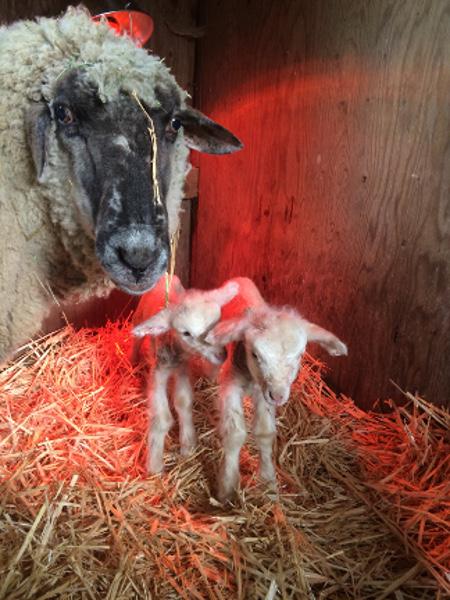 Going into the fall of 2017, Lily was our only adult female, Penny had died earlier in the season.  We kept all four of this spring's lambs but did not breed the girls until next fall.
2018 Lily and Archimedes produced two beautiful boys both pure white like their daddy.

2019 Lily comes through again with two lambs but I haven't found any baby pictures. 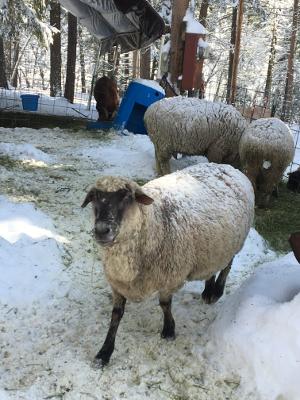 Ruby and Tuppence also had babies this spring - one girl each (that survived their first week) - and their names are Pearl and Maybelline.  Can you guess who is who? 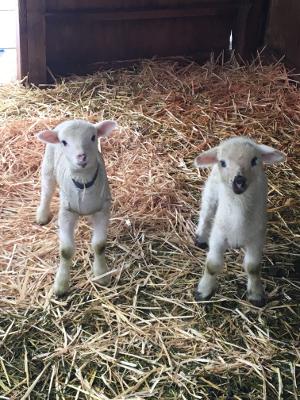 The newest little girls with their momma's 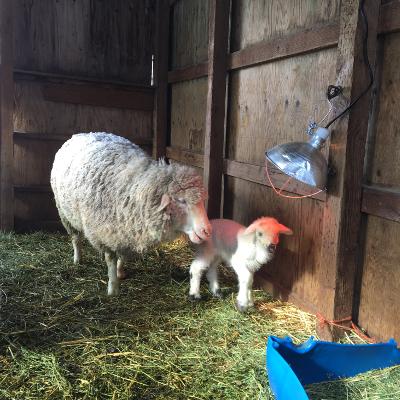 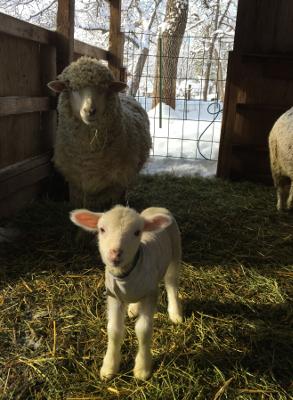 2020 Lily and Blackie, a Suffolk addition to the flock, produced three beautiful babies
Lily was 11 years-old and delivered three - she usually delivers 2 and all boys but this year we have two girls and a boy... 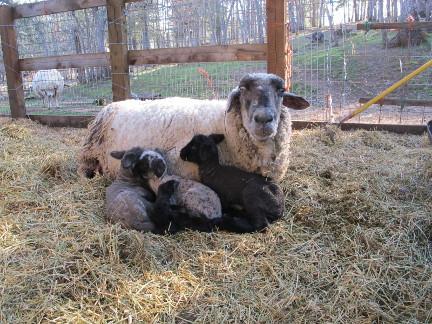 ...but the strain of raising them was too much.  Lily survived their birth but within days we were faced with the decision to bottle feed or not.  Lily had given them a good start and they all had healthy doses of colostrum and we decided to bottle feed them for about two months and all three are healthy and strong. 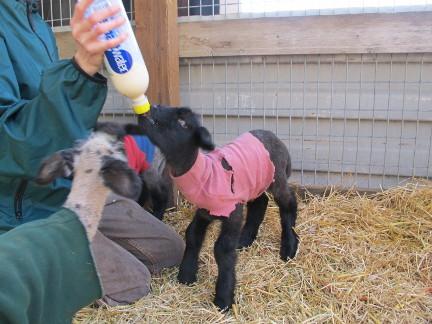 Lily's lambs are growing.  The black lamb is Lizzie.  The speckled is her sister and their brother is Sketch. 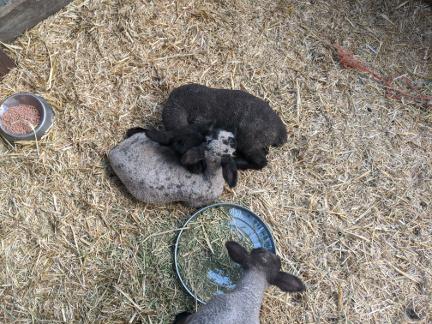 Lily's lambs are nearly full-grown - Pearl is the white-faced sheep on the left is a yearling. 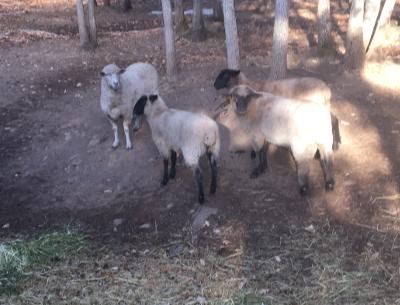 Thank you for taking this journey with me as I come to grips with Lily's recent death.    She and I have been through a lot over the years and I'm hoping this post will help me and entertain you.
Lily's passing marks a big transition in my life and I will miss our after snack sessions when I would take an armload of weeds from the garden and go hand feed her and all her sheep friends.  I stepped away from directly managing the sheep to focus on resolving some medical issues and with them resolved, I'm heading to Wheaton Labs next week for BB20 2020.