How would you use a dome frame?

posted 9 months ago
Just came across an ad for a used dome on a local website. According to the description, the metal framework for this 32 ft dome is in excellent condition and the cover could use replacing. From photos, I would say they had this buried under a foot or so of soil. Not sure what it was formerly used for.

I'm looking for an interesting and economical way to create housing or other farm buildings at our new place, so this is tempting. I've always liked domes. But I'm not sure what would be the best way forward to turn this one into something useful. What would you-all do with it? Would you turn it into a house? A studio? Something else? What would you cover it with?
interior-dome.jpg 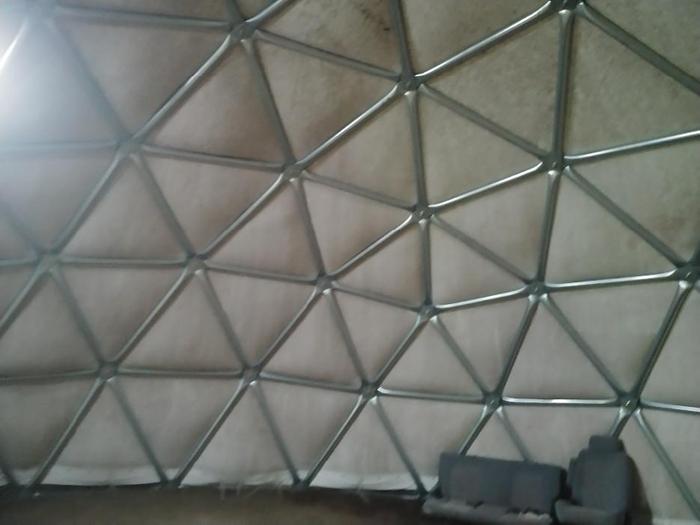 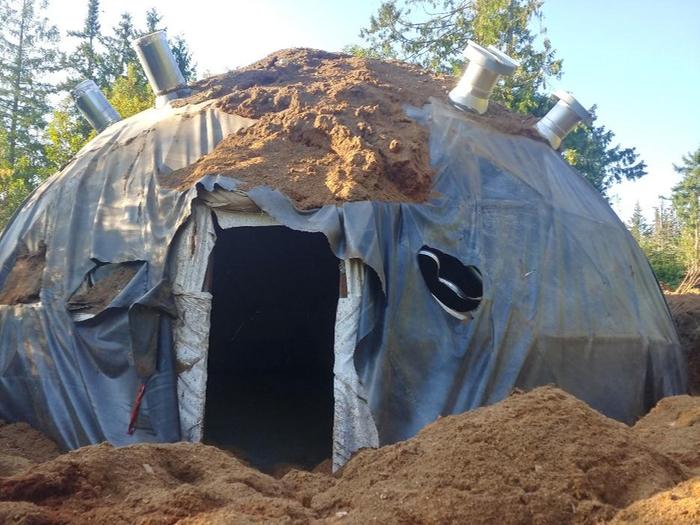 posted 9 months ago
Wow, great score! I think there are all sorts of things you could use it for.

1. Need a protected garden area? Hardware cloth at the bottom to stop rabbits and the rest would keep the deer out.
2. Need a chicken run? Make one of the "triangles" into a slightly elevated pop door and tack a secure chicken shelter for night use on the outside. Make it into a paddock/shift system where the dome is the central safe zone with deep mulch and have paddocks radiating off it that you can cycle the birds through for good forage.
3. Just how strong is it?  Bury more of it into the north side of a hill for a cold cellar that can be sectioned off for different temperatures. Use a bunch of the free tarps from billboards or that cover wood in lumber yards, because if you use enough of them, any little holes won't matter.

You will notice that I have *not* suggested housing. Housing needs to stay dry, and that can be a challenge with this sort of dome from what I've read. The possible exception might be to cover it with chicken wire and then use that "aircrete" sort of stuff to build up layers and achieve a seamless exterior. The issues I see are that metal expands and contracts based on temperature more than many other materials, so that can encourage cracks to develop over time. Friends I know had a yurt and it looked great the first couple of years, but the tarps degrade amazingly fast between solar exposure in the summer and constant wet in the winter. The last winter I understand that leaks were an issue, so similarly, I don't recommend tarps unless they're covered with something to keep the sun off.

These are just my off-the-top-of-my-head thoughts - hopefully more people will add their creative ideas!

posted 9 months ago
Green house? Pond cover? I would look at greenhouse plastic or heavy ml vinyl to cover if waterproof is needed, hardware or mosquito mesh perhaps for at least some panels or the lower portions?

Could it be a massive arbor for grapes, kiwi, beans or other dangling/climbing fruit or veg. It might be neat for espallier fruit trees on the outside, veg beds on inside for crops that prefer less sun?

Jay covered most of the best ideas!

posted 9 months ago
Thanks, those are great ideas.

Jay, it's not a score yet - I'm still trying to decide if this is something worth contacting them about, at this point it is just something I saw the ad for.

Andrea Locke wrote:Jay, it's not a score yet - I'm still trying to decide if this is something worth contacting them about, at this point it is just something I saw the ad for.

Sorry - I read too fast and missed that little word "ad"! (too busy admiring the pretty pictures)

However, that leads to the question of the cost - what could you build for the cost of this, that would cost you more/less if you built similar out of different material?
Any idea what it was originally intended for?
Any idea what the original price might have been, or if the seller is actually the first buyer?

So many potential questions... I love to re-purpose and re-use things, particularly if it keeps them out of the land-fill or scrap yards.

posted 9 months ago
We could build equivalent trellis or wofati style root cellar or chicken houses for close to free as we have a lot of logs and poles salvaged from logging slash piles we are cleaning at the new property. And from conversations thus far it seems like this might not be a great choice as the starting point for developing housing.

I think the best use would be greenhouse although that would either mean getting into a commitment to regular replacement cycles of plastic which I want to avoid, or a large upfront cost and substantial time to fit a permanent hard greenhouse surface to all those polyhedrons. There are easier ways to biild a greenhouse for sure.

No idea what it was being used for. The photos seemed to indicate it was buried with some light tubes and a dirt floor. As I had not contacted the seller (and honestly probably will not, now, having had some time for critical reflection) I don't know the answers to any of the other questions.


Once you make a decision, the universe conspires to make it happen. - Ralph Waldo Emerson

jim loggin
Posts: 21
posted 9 months ago
using it as a quratine structure comes to mind. build a decking for it. then the dome on top of it. what goes inside, will be for a temporary stay. this way. everyone will know if someone is sick with something or not, before going into the primary home. or it can be used as a guest house for over night guests
Jay Angler
gardener

And from conversations thus far it seems like this might not be a great choice as the starting point for developing housing.

This partly depends on the price/time ratio. If you need instant housing, this could work in the short term if it's cheap enough.

Have you considered longer term, splitting it into 2 "quarter" domes (it appears to be a half dome now technically, maybe, language?? Is a dome half and a sphere whole?) and using them as a 'front porch' sun catcher on the south side of something like a wofati (since you've got lots if logs)? My sister has a "sun porch" and it gives her a place to stand to remove wet clothing and boots and if she gets sunny winter day, it can heat up enough to sit out for a bit in the middle of the day. She also can use it to harden off plants while still keeping them easy to care for.

best use would be greenhouse although that would either mean getting into a commitment to regular replacement cycles of plastic which I want to avoid,

I soooo.... agreee! Greenhouses don't need to be water-tight, compared to actual housing though, so collecting "free" glass and over time and replacing the plastic with glass as an ongoing project over a number of years could be done. I'm writing this as much to give others the idea. If you've got "free" wood available, I'd keep the glass close to the size you salvage it and build the greenhouse out of wood as it would likely go quicker.
I have read that some window glass is made to reduce certain light spectrum through - does anyone know how to test that on a home scale? Plastic is pushed sooo... hard for greenhouses, but I know that glass houses and glass cloches have been used for centuries, so glass can't be that bad or is it just 'less good' than plastic or more likely, "more affordable" in the short term (because people often don't know the cradle-to-grave costs).

posted 9 months ago
The price they are asking for the used dome is fairly close to the used RV we bought last year which my daughter uses as her primary home. It's watertight and came with working appliances and such. So as temporary housing I am starting to think my best bet would be to pick up another RV like that. It could be sold afterwards more easily and would be ready to live in right away. There was a trailer like hers for sale two months ago just down the road and I kind of wish now I had bought it.

I have been using an opaque white car shelter as an unheated greenhouse for years and plants seem perfectly happy in there. So maybe they are not too fussy about using a mix of glass from salvaged windows? I had never given any thought to window glass types blocking different wavelengths but now Jay has brought that up I am curious to learn more about that too!

The idea of constructing quarantine housing is interesting. We don't have a need for it - no one we know is travelling! - but I imagine having something like that could be quite useful for other families.

posted 9 months ago
Glass: to my knowledge the UV blocking glass is the double paned, with some sort of gas contained between the panes.