Alex Ames
Posts: 415
Location: Georgia
16
posted 8 years ago
This is getting out of hand! 40+ feet wide and spreading. Does this qualify me as having a food forest?
IMG_1673.JPG 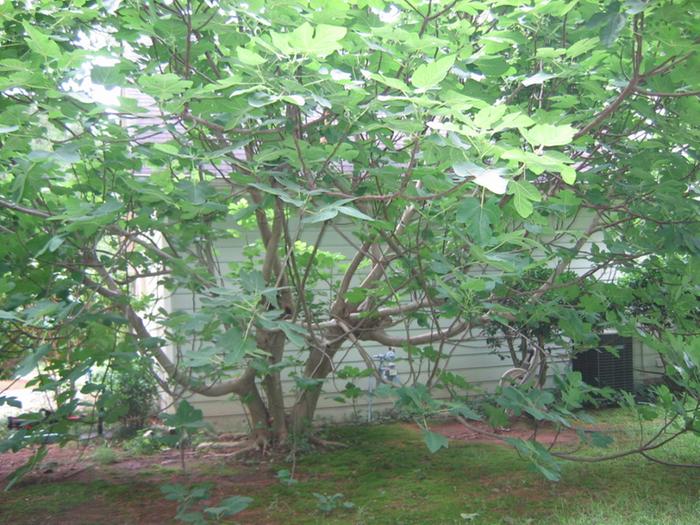 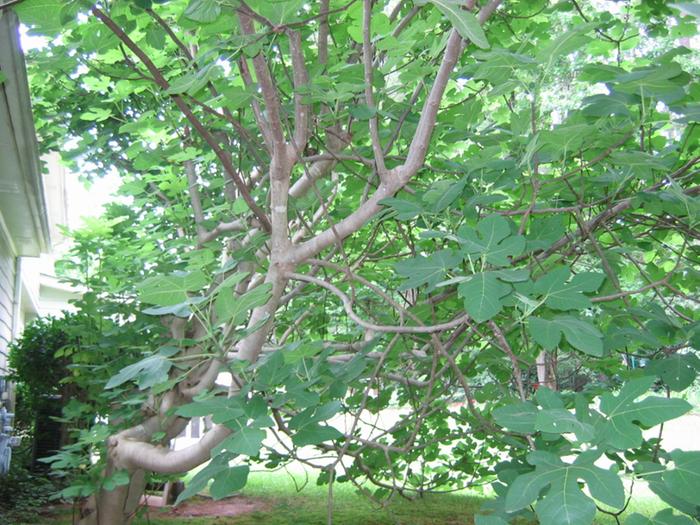 posted 8 years ago
I have fig envy.

Alex Ames
Posts: 415
Location: Georgia
16
posted 8 years ago
This is merely an entry into the huckleberry pie contest not an attempt make anybody envious!
The weird thing is that we have already eaten figs and lots of baby figs are back on there. That is
not normal. Usually figs come along in July sometime as I recall. The pictures do not do the plant
justice, it is huge.
wayne stephen
steward

Posts: 1748
Location: Western Kentucky-Climate Unpredictable Zone 6b
106
posted 8 years ago
I remember the figs in the SW coming in June/July and then a second round in September . The later ones would be full of wasp larva so you had to settle for the earlier ones. What variety is it ? Mission figs get as big as maples.

wayne stephen wrote:I remember the figs in the SW coming in June/July and then a second round in September . The later ones would be full of wasp larva so you had to settle for the earlier ones. What variety is it ? Mission figs get as big as maples.


It is a "brown turkey" variety which is capable of getting 50' tall but normal is said to be 10' to 30'. This one is pruned away from
the house on one side and I usually prune most of the vertical shoots to encourage it to go wide rather than tall. I have a neighbor
who has a different variety with fruit that is thicker skinned and he does not prune his tree and it is nearly as large as mine. His tree
is very productive.
Burra Maluca
Mother Tree

posted 8 years ago
The problem with growing figs too near a wall is that eventually they get lopsided, and this happens...

This tree belongs to an elderly neighbour and it was her pride and joy. It was full of not-quite-ripe figs, which stayed on the tree for ages afterwards gradually drying out but never really worth eating.

We were in there this morning making hay and am glad to report that there are several rather healthy looking young trees growing up from the old roots. Might take a sneaky photo later if anyone's interested...

Posts: 3999
Location: Wellington, New Zealand. Temperate, coastal, sandy, windy,
103
posted 8 years ago
My negronne fig's in a big, buried pot to control it's roots. If I let it 'do it's thing', it would probably make it into the water pipes eventually.
It's winter and my breba (first crop) figs sit on the tree, then ripen in early summer while the late crop's coming on.
I'm going to keep the the tree seriously pruned. As far as I know, figs only fruit on first and second-year wood and it's all about squeezing things in round here

Alex Ames
Posts: 415
Location: Georgia
16
posted 8 years ago
Burra that was a sad day for that lady I am sure. Years ago I spent some time in Morocco and the fig trees
and the figs themselves were very large compared to what we tend to have here in the U.S. I am sure it is based
on climate and variety but I remember being in awe at the time.
wayne stephen
steward

Posts: 1748
Location: Western Kentucky-Climate Unpredictable Zone 6b
106
posted 8 years ago
I am a fig fanatic so I will share this figgy recipe with you all . I got this idea from a yogi medicinal guide that said a combination of fig, saffron, coconut , and pistachio was a wonderful tonic for all the body . So - heat say two cups coconut milk just below simmer and turn off , steep a good pinch of saffron pistils until milk is cool . Use a food syringe with needle to inject the coconut/saffron mix into ripe figs. Use remaining milk mixture to marinate the figs in a bowl overnite.
Then roll the figs in chopped pistachios . Way better than figs in port.

Alex Ames
Posts: 415
Location: Georgia
16
posted 8 years ago
Wayne, I guess we are on the opposite end of liking figs. I like them right off the tree the best and it all
goes down hill for me after that. I can't say I have ever tried anything like what you described.
Daniel Morse
Posts: 288
Location: SW Michigan
8
posted 8 years ago
Love figs guys. Thye do not do well in our half arctic/half hellish climate that Michigan has become.

Alex Ames
Posts: 415
Location: Georgia
16
posted 8 years ago
Our second harvest of figs is well under way. I walked around and picked the low hanging fruit and that filled
up my dehydrator. The birds are getting the high stuff and I don't mind sharing.
IMG_1683.JPG 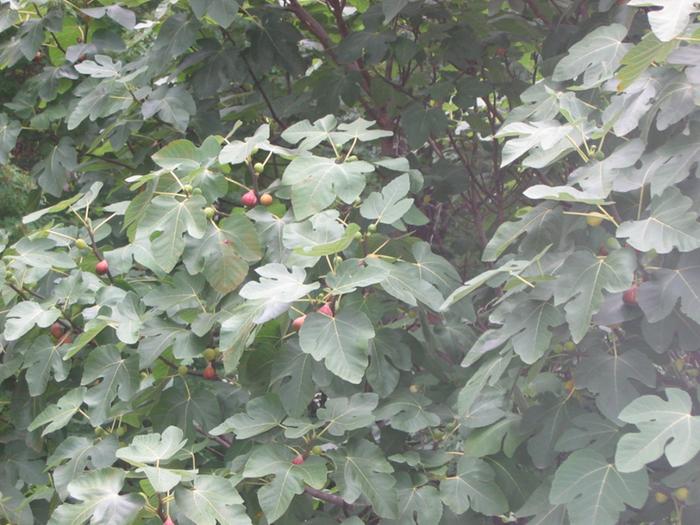 Yes, I am starting to rub it in at this point. When you consider this thread was an attempt to enter Paul's Huckleberry pie
contest when it started. Paul came through for me! The figs are a bonus.
IMG_1677.JPG 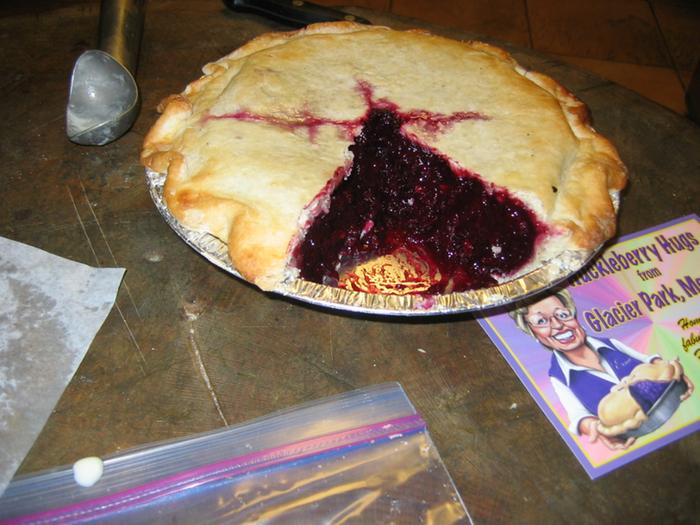 Alex Ames
Posts: 415
Location: Georgia
16
posted 6 years ago
Figzilla is at it again. Can you find the catbird in this picture?
image.jpg 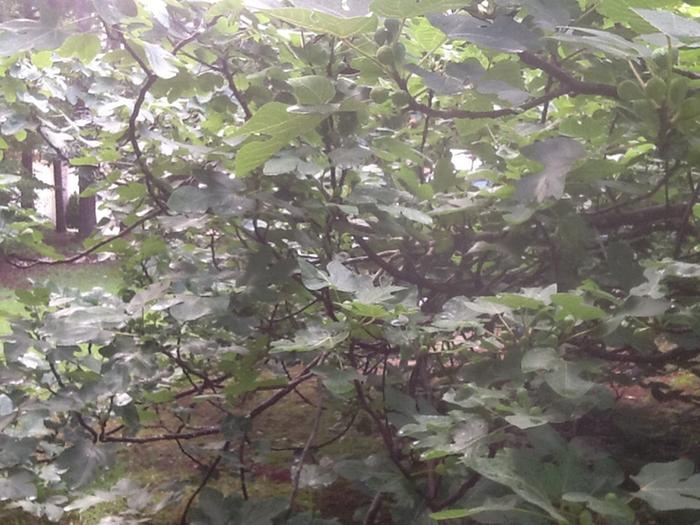 John Elliott
pollinator
Posts: 2392
88
posted 6 years ago
Why are the figs late this year? I have lots of figs on my trees, but none are close to being ripe and we've only got one week left in July. What gives? Is it the same where you are?
Alex Ames
Posts: 415
Location: Georgia
16
posted 6 years ago

John Elliott wrote:Why are the figs late this year? I have lots of figs on my trees, but none are close to being ripe and we've only got one week left in July. What gives? Is it the same where you are?

John I am South of Atlanta and according to my post above on July 17, 2012 I was on my second
harvest at that time. Not so this year. I think it was the cold but my tree was not fazed from any
outward appearance I have noticed. I just take them when I get them. My blueberries are almost
gone, just a handful the last couple of mornings. They were nowhere near as productive for me this year
as last.

Just wait a day or two and your figs will ripen. I am getting a few a day ...with tons to come.
John Elliott
pollinator
Posts: 2392
88
posted 6 years ago
I'm glad I can compare to you, Alex, and it's not just me. I thought I had neglected to mulch of fertilize or something and was a bit concerned. I also had the last of the blueberries this morning. If I recall last year correctly, the blueberries went well into August due to all the rain we had in July.

Planning your garden around climate is one thing, but you also have to pay attention to the current weather (and with climate change, its wilder swings).
John Polk
steward


John Polk I only pruned the vertical shoots. We just did not have the double crop
this year that we usually get.... unless it is coming much later.
image.jpg 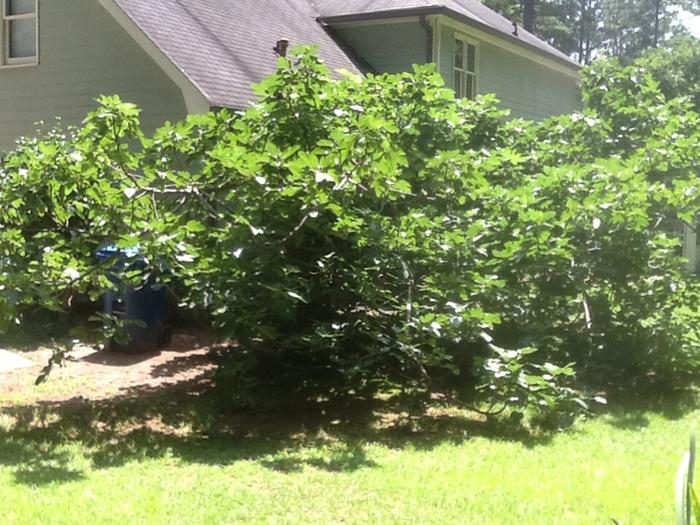 We just did not have the double crop this year that we usually get.... unless it is coming much later.


Where I was, our 2nd crop didn't come until late summer/early autumn.
We probably had the same heat as GA, but certainly not the humidity.

I believe that my trees might have been planted during the Ottoman Empire.
Figs had been an important crop for well over 2,000 years in the region.
I never could figure out what to do with that many figs.
I gave them away by the boxes.

posted 6 years ago
Here in the PNW people have traditionally planted Desert King and Brown Turkey, which ripen early due to our lack of heat. We have a bumper crop this year. I eat them by cutting them in half and putting lime juice on them. I think they are sweet and bland by themselves, but mixed with lime juice they are excellent, and it adds another nutrient. We're going to have to cut our Desert King back because it's taking over the driveway and front of the house.
John S
PDX OR

- so I assume, you have your own fig tree. plus you are in "unpredictable zone 6b". Thats probably matching my situation. Plain question, what variety of fig would you suggest to try? Growing figs is unusual in my region, to say the least, so not much local experience to tap into.

posted 6 years ago
There is a variety called "Chicago Hardy". I've heard mixed reviews about whether it is in fact Chicago Hardy, but that's really cold in the winter. I live in 8b so I don't have to worry that much. I would consider trying it.
John S
PDX OR

There is a variety called "Chicago Hardy"

The name of that variety helped me to find a semi-local nursery (300km), specializing in figs.

thank you a lot
Ludger
Troy Rhodes
Posts: 632
27
posted 6 years ago
Steven Biggs sort of recently wrote a book about raising figs in northern temperate climates. He lives in Ontario. Based on his information, and stuff gleaned hear and there, I now have 5 fig trees in containers. 5 gallon self watering buckets, some good dirt, a basement to store them in during the winter for dormancy.

It does not seem too insurmountable to get a useable amount of figs in michigan, but I'll let you know in 2-3 years when they start bearing.

Posts: 7926
Location: Currently in Lake Stevens, WA. Home in Spokane
318
posted 6 years ago
Here is a short video about the Chicago Hardy.
Most of the nurseries offering it suggest that winter protection is necessary (north of zone 7), while some growers claim that if it does die back in severe weather, that it will grow back (and fruit) once spring returns.
Many have claimed fruiting in its first year.

Posts: 7926
Location: Currently in Lake Stevens, WA. Home in Spokane
318
posted 6 years ago
And, here is a video showing winterizing a fig:
[youtube]https://www.youtube.com/watch?v=d9m_TMY0Ags#t=37[/youtube]

wayne stephen wrote:I remember the figs in the SW coming in June/July and then a second round in September . The later ones would be full of wasp larva so you had to settle for the earlier ones. What variety is it ? Mission figs get as big as maples.

Dry the fig, and wait for the wasps to vanish? I couldn't find anything online about eating wasp larva.