posted 1 year ago
Anyone get a Bingo? I did for fruit trees, rakes, fire pit and mushroom spawn! 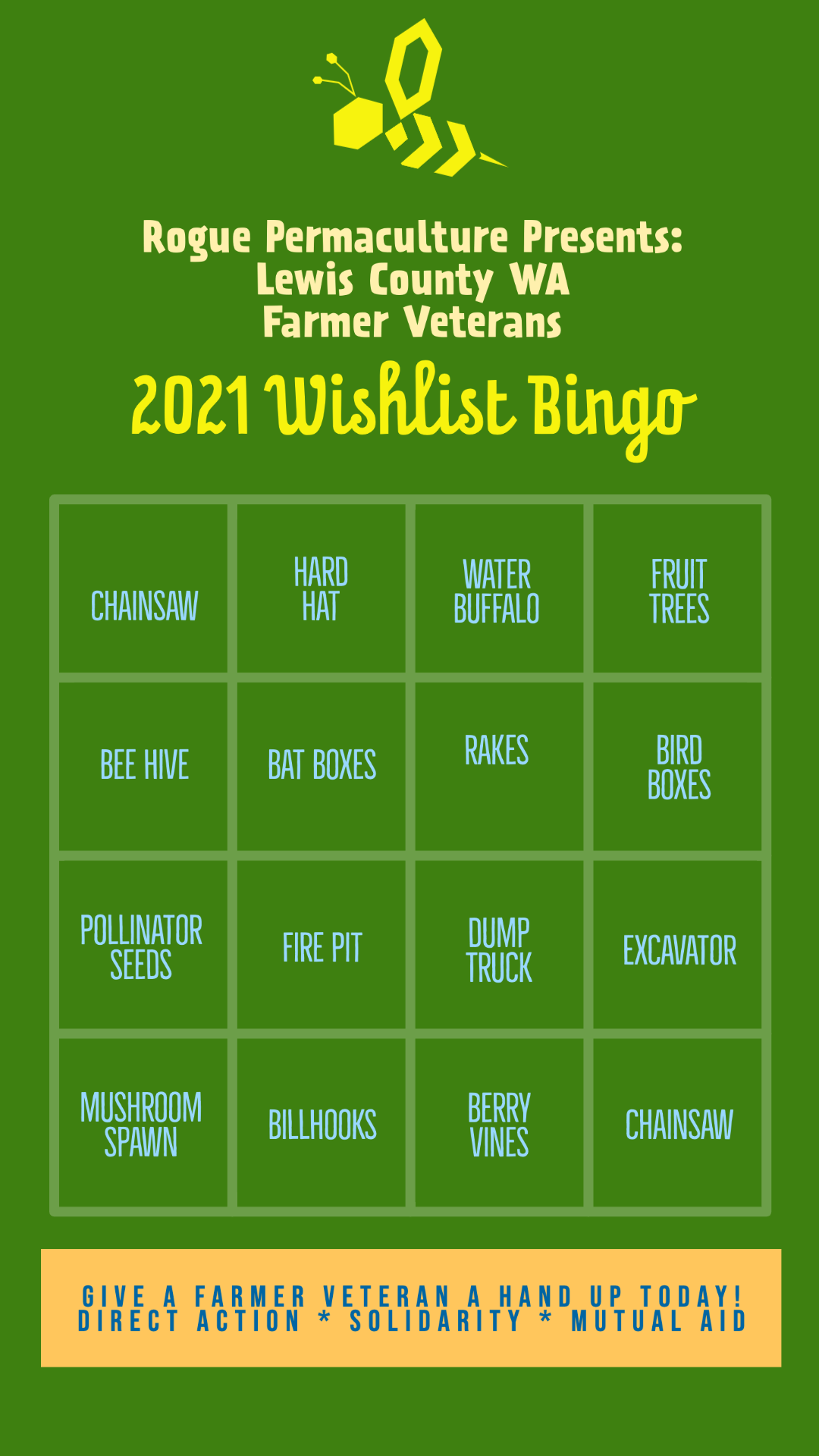 posted 1 year ago
So close, but I have nothing to do with Water Buffaloes!

How much can I 3D print for the garden? Looking forward to finding out

posted 1 year ago
I hadn't realized it had waterbuffaloes!

This brings back memories from my childhood

posted 1 year ago
That bingo card was created by this group:  Rogue Permaculture Pogs, https://permapog.com/. They put up three definitions for their name:


Rogue:
: to weed out inferior, diseased, or nontypical individuals from a crop plant or a field
:An independent or uncontrolled person that is not authorized, normal, or expected

Permaculture:
“The conscious design and maintenance of agriculturally productive systems which have the diversity, stability, and resilience of natural ecosystems. It is the harmonious integration of the landscape with people providing their food, energy, shelter and other material and non-material needs in a sustainable way.”

~ Bill Mollison, the Tasmanian son of a fisherman who first coined the term 1978

POG:
The term comes from the word "pogue," which is Gaelic for "kiss." It was started by disgruntled Navy sailors of Irish descent who served during the American Civil War. They were upset that others, would never leave shore, would get to stay home and get all the kisses from the ladies while they were out fighting.

Then, Marines caught wind of the term, adopted it, and began using it themselves to describe anyone who wasn't involved in any type of combat. The term eventually found its way into the Army where it become POG (Person Other than Grunt.)

With their main goal being:

I just thought it was fun to get the backstory on the fun bingo card. I'm going to add this to the Cascadia forum because they are in Western WA State. Thanks for posting Nicole!

posted 1 year ago
I've got the hard hat and Hubby's got several chainsaws, but then he's the type that if two are good, three are better...

I would LOVE to have a top-bar bee hive though. Made out of *really* thick wood so it will help them feel like they're inside a natural tree hollow. I'd be pushing that project harder except friends down the road have given a farmer a place on their land for a hive in exchange for honey, and they share their honey ration with me in exchange for plants and pumpkin pie.

Hmmm... it's awfully dry here for a water-buffalo. And they're pretty big. And I expect if I only had one, he'd be lonely.

Brian Holmes wrote:So close, but I have nothing to do with Water Buffaloes!


Water buffalo ican also refer to a water trailer in slang. This is what the army calls these. Considering all the other equipment listed and no animals...i would guess this is what they intended.