How thick should my supporting poles be for roundwood timber framing?

posted 1 year ago
Unfortunately, my previous profession lends no insight into the structural properties of wood, so I'm searching for information regarding how thick my roundwood timber should be. I'm Following Ben Law's book for roundwood timber framing for a cruck design, and I'm in the process of gathering the wood for the coming season.

The house is ovular at the bottom with an 3x4 meter interior. Add 30cm to each side to get the distance between the base of each cruck. The height of the roof almost 6 meters, and the cruck poles are almost 7 meters longs. The roof will be wooden shingles, but considering this is 55º North and we can get considerable amounts of snow, how thick should my poles be? What's the minimum I can get by with? Of course, I'm gonna add on to be safe, but I'd like to get an understanding of the structural integrity of wood. The wood I'll build with is European Spruce (Picea abies).

To be helpful for any future cases, all information regarding the title is welcome, even if it doesn't fit my specific case, though I am here looking for answers :)

Screenshot-2021-02-15-at-09.14.56.png
Yaron Mor
Posts: 3
posted 1 year ago
Hey, I'm new to the forum but have an architecture degree so I  hope at the very least to give you some basic insight.
The image attached shows several points you can concentrate on. The main property of wood that you don't have in stone for example is its pulling force, meaning that if stationed length-wise horizontally, the force applied to it from above can move along its fibres. When stationed vertically though, wood has a quite decent push force, meaning it can hold good wait from above.
As any construction beam, the longer ahorizontal beam is with no support from below, the taller it needs to be. So one tip would be to cut away from the sides of the beams put on the roof so they'd be as tall and light as possible. Refer to an H beam in steel construction - the weight of the beam is minimized while its strength is maximized by putting most material at the extreme ends(I think that I beam would be a better name for it since the extreme ends are situated above and below, and not on the sides)

You can see on my sketch some arrows, those are meant to indicate the direction of the force. In order to have an integral structure, make sure that each force from above coming from the weight of the structure, will have a clear path downwards, and will have the correct counterforce. In this case I've annotated the main diagonal beams - make sure they have a counterforce at the base(burrying the beams to a decent depth might do the trick though pay attention to rot!) and with the triangles formed between the diagonal, vertical and horizontal beams, make them fixed onto eachother.

A final detail I would pay attention to is the rectangle on the north and south facing(nonexistant) walls - any substantial horizontal force will knock your structure down sideways like a house of cards, since there is no element or fixed joints to support your beams. I sugest either creating fixed triangle joints at the top of the vertical beams connecting to the horizontal beams, or creating an x on one side of the structure like i've shown on the sketch.

That works great for posts and ok for beams, but things get too heavy to support their own weight as you get into rafters and roofs.

Markus Padourek
Posts: 42
8
posted 1 year ago
I don't know much about this topic, but there is a school in Denmark that has built a building with european spruce roundwood and is talking about using minimum 15cm diameter trees: https://offgridbrenderuphojskole.com/brende-konstruktion
Maruf Miliunas
pollinator
Posts: 107
11
3
I like...

posted 1 year ago
Thanks for the detailed answer Yaron, and the rest for pointers of pole thickness. I realized I forgot to include the windbraces on this latest design, though I'll play around with what you say to ensure there's a clear diagonal force from the roof to the base. I've considered a triangle house, and if I could get the materials, I might go for it. For the roof, I dug through the roundwood timber framing book and the internet to find examples for roofing, and unfortunately, I can't find anything using round poles that works for a northern climate. In the book, their examples use milled lumber that's taller, to allow for roof insulation, which in my case will most likely be straw, hence you're right I need lighter weight, and also more height.

Regarding your note about the cruck going against the corner pole, in all the examples I see, they have them side-by-side like here 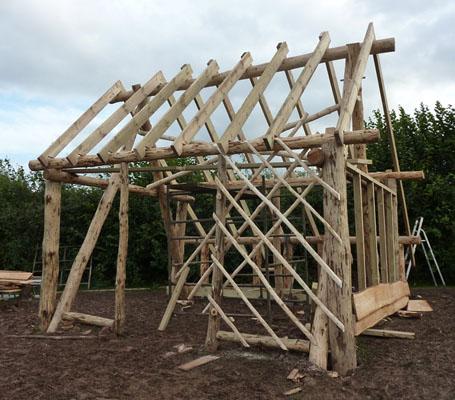 I've updated the design. If anyone knows of a northerly example using roundwood for an insulated roof, please share! 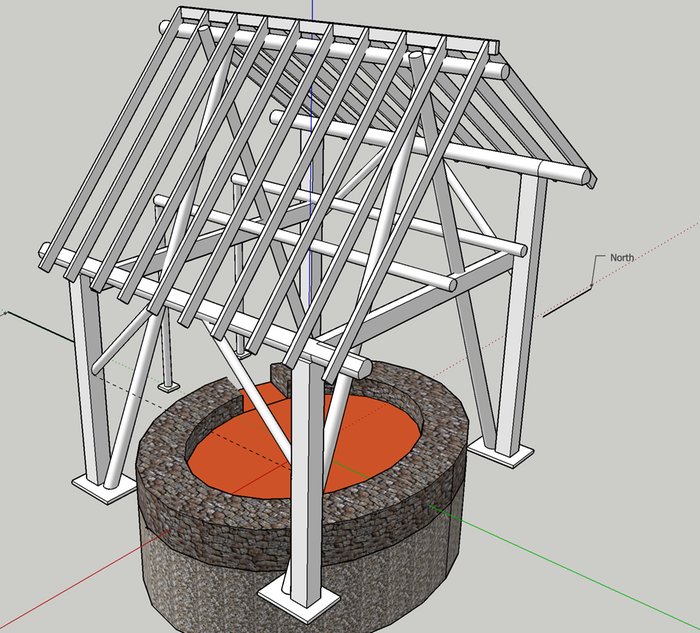 Markus Padourek
Posts: 42
8
posted 1 year ago
Interesting, I am also considering to build a roundwood timber framing building and that is a very interesting question, if it is possible to use round pole for the roofing in a northern climate (which I would have liked to). I have seen two more, older books on the topic: https://www.amazon.com/Low-Cost-Pole-Building-Construction-How/dp/0882661701 and https://www.amazon.com/Practical-Pole-Building-Construction-Outbuildings/dp/0913589160 but yeah not sure how relevant they are.

Edit: Not a northern example but also just found this: https://www.chestnutgrove-sawmills.co.za/listing/round-poles and from maybe a different scenario (just a shed) but here a possibly relevant video from Paul: https://www.youtube.com/watch?v=sVmQlP2Y-2E and a post from another thread: https://permies.com/t/119880/fasten-dimensional-lumber-rafters-timber#968005
Markus Padourek
Posts: 42
8
posted 1 year ago
I just foun an interesting short article about traditional wooden roofs: https://www.sustainableheritage.eu/wooden-roofs/ especially birch bark roofs sound very interesting: https://en.wikipedia.org/wiki/Birch-bark_roof - that uses poles and no need for nail. But no idea what the best insulation strategy would be - I guess one could insulate the attic space or one would have to come up with an extra support structure for the insulation.

I also did not know that the sod roof was so traditional and basically an extension of the birch bark roof: https://en.wikipedia.org/wiki/Sod_roof

A bit off topic, but I do also wonder how such birch bark roofs work for potable rainwater harvesting.
Markus Padourek
Posts: 42
8
posted 1 year ago
Another interesting one on wooden plank roofs, where there are examples with roundwood for support: https://www.sustainableheritage.eu/wp-content/uploads/SustainableHeritage_ReportNo5_ISBN978-952-7075-00-5.pdf
Yaron Mor
Posts: 3
posted 1 year ago

Markus Padourek wrote:Another interesting one on wooden plank roofs, where there are examples with roundwood for support: https://www.sustainableheritage.eu/wp-content/uploads/SustainableHeritage_ReportNo5_ISBN978-952-7075-00-5.pdf

Maruf, here's a link to a permies thread that is all about round timber! https://permies.com/t/136807/Diameter-roundwood-timber-framing

posted 1 year ago
Thank you really Markus for the resources. Yea, I also considered birch bark & sod. It would be the ultimate in eco. Most important, you need to make sure the frame can support such a heavy load. I'm putting that option off until I'm more confident with loads. Second, you need to know when and how to harvest the bark (I believe nowish is the best time to do so). I wish there was more information on this topic.

Otherwise, I'm wondering if there's room for creativity here to possibly double up smaller poles in some secure manner to achieve the height needed to insulate and cover the roof.

PS. I dug into the report on plank roofs and applying pine tar to them. That's genius too, I wonder why this is so rare nowadays. I wonder what's the best way to insulate them then? If you were to insulate with straw, would you add the straw right before covering the roof or after from underneath somehow. I never much understood roof insulating…
Glenn Herbert
gardener

Posts: 3778
Location: Upstate NY, zone 5
305
4
posted 1 year ago
Certainly you can double up smaller poles to get the roof thickness you desire. Depending on specific circumstances, you could size the lower set of poles to bear the load and place upper ones on top, or run some horizontal poles across the lower set of rafters to space out the upper set and tie the roof together... lots of possibilities.
Markus Padourek
Posts: 42
8
posted 1 year ago
Yes I agree, it is a shame there is so little information on birch bark & sod roofs, but in terms of load there is a lot of information on traditional green roofs, which I would imagine have a very similiar load requirements. But one can find information on these roofs here and there, for example: , https://www.youtube.com/watch?v=CXt6P-2qrHE and https://blackburnarch.com/2009/10/01/sod-roofing-explained-barns/https://twitter.com/wrathofgnon/status/1070940890812768256 - about harvesting, they talk about early summer in the first twitter thread btw. But yeah I understand where you are coming from, I am seriously considering a birch bark roof without sod (due to potable rainwater catchment), but also find it a bit daunting with so little resources and examples in my surrounding area. One new type of roof I just found out about that I can find in my region are seaweed roofs: https://www.visitnordjylland.com/north-jutland/destinations/seaweed-roofs-laeso but no idea how good they would be for rainwater catchment.

In terms of insulation, that does sound like an interesting idea with doubling up the poles,but  looking at the image here: https://www.wisatakuliner.xyz/images/beautiful-insulating-an-attic-2-how-to-insulate-attic-roof-trusses-700-x-600.jpg there would also be other strategies how one could insulate the roof, without needing to have it directly under the roof, but I guess they also have their own drawbacks. In terms of what the best way would be to insulate directly underneath the roof, I was at a short tiny house building course where we insulated it with straw. We did it from the top before we put on the roof and that was pretty straightforward. The teacher said that one could also put on the roof first and then put it in from below, but that it is very tricky and also one gets a very good workout. He definitely prefers the method of putting it in from the top, but then of course one should be quick with putting on the roof.

posted 1 year ago
I came across this documentary and I noticed their technique to peel the bark of birch trees before they fell it the following winter. They make it look so simple. With what they harvest, it's easier to imagine how one would lay sheets of that down for a sod roof https://youtu.be/dIdHG9zyrtE?t=1530
Jeff Wesolowski
Posts: 61
Location: nw ohio
3
I like...

posted 1 year ago
If your ridge beam cannot support the weight of the rafters, ie, pushing out on the exterior walls, one can add collar ties to resist that force. Otherwise, your walls will be pushed out and are only being held together at the end of the building.
Maruf Miliunas
pollinator
Posts: 107
11
3
I like...

posted 1 year ago
I like the idea of collar ties. I imagine they could also serve to support a dyhydrator tucked in the roof.