Late Frost Protection - What have you tried?


My particular Problem:
My place is beautiful and up in the mountains. I'm at 4000ft, south-sout-eastern slope @ 30° incline (66%, so pretty steep). It is certainly not prime garden territory but I do what I can and select the plants that work for my zone - which is 7 (I have years that stay well within 8 and true laurel - zone 8 - grows big both against stone walls and free standing in the garden (for 20 years or more now). In fact overall temps are pretty benign in my micro climate during winter, but there is one thing that is bound to ruin things: late frost. It is worsened by the fact that at my incline the ground stands at a better angle even towards the winter sun and thus heats up quicker. On the slope there is no cold sink and I'm usually snow free after a few sunny days. I might have weeks on end of pure sunshine and above freezing temps in February and March. So things just start sprouting and growing. April and sometimes even May weather may turn for a few days. Cold air sent by the Russians hits Europe and the Alps. Last night it hit 24 F

Here is an image of the house and property (in May), though the garden below the house is not very visible in that pic: 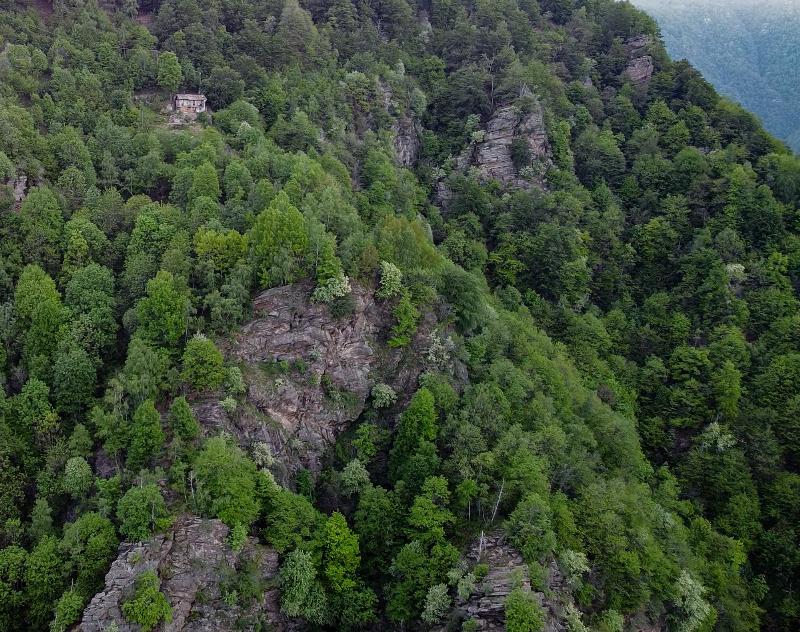 Late Frost - Solutions for fruit bearing trees and bushes?
There are some solutions I'm aware of:
- making it rain on the plants as long as the temps are below freezing to use the heat that is generated in the process of freezing - sounds strange but that is physics and done on big plantations where there is such a risk (not feasable in my case)
- heating with torches (not feasable - also because heat travels up the hill and does not stay near the trees)
- putting garden fleece out there (works form some smaller things but not for big things)
- people (agrarean scientists - mostly in vinyards) have experimented with spraying a 10% vegetable oil solution in spring before the buds form which appears to delay things anywhere from 2-40 days depending on the weather and other factors in the case of wine. (can be a problem for plants that need the longest possible growing season - including wine that might need those sun hours to produce sugar - but it may work for other things. Research is still being done.)

Other Ideas?
Has anyone experimented with other methods to delay leafs/blooming?
- There is the advice sometimes given to put early flowering plants that are at rist, like apricots, on the north side where it stays cooler longer. That can work for some. My land however is entirely on the southern slope.
- terracing. Terraces improve not only water retention but their level surface also decreases the angle to the winter/spring sun, thus the ground does not warm up as quickly. Snow stays visibly longer which proofs the point. One point with stone terracing though - as in my case - the stone wall retains heat which is great in cool summer nights and it protects from cool winds but that of course counters the desired delay of the ground warming up in the spring as well.
- mulching? Can mulch in a certain thickness isolate not only the ground against freezing but also from warming up too much? Anyone have experience with that?
- shading? When I look at the northern slope that I face it naturally stays cooler much longer. Snow covers the ground there when I pick the first flowers.. Since I can only plant on the south side, would it maybe be an option to construct artificial removable shade (from willow branches - woven like a willow basket - or with poles and fleece for example) and place that like a "wall" in front of the sensitive trees. It would place them artificially for a month or two onto "the north side" (of the wall) and prevent the ground from warming up - and thus delay blooming.

posted 2 weeks ago
I have tried one trick and it did work for me.

I used not fire but hot water.  Specifically I poured scalding hot water into a 5 gallon (20 liter?) bucket, covered with a lid and then set next to the tree trunk.  The bucket radiated out heat for a surprisingly long time and was just enough to keep frost off my peach trees.  For better luck, try insulating the bottom, maybe by sitting the bucket on a couple of boards.  I think this is better than the fire option because the fire will tend to be too hot, overheat the area directly above and not warm the rest of the tree (unless it is too hot).  The water on the other hand is not going to hurt the tree.  The worst it can get to is boiling, and water can certainly hold a lot of heat and radiate it out for quite some time.  I would imaging the bigger the bucket the better this method will work.

I tried something similar for my tomatoes.  In a pinch, I filled a black plastic garbage bag about 1/3 full of water and let it lay in the sun in the middle of my tomato patch on a sunny spring day.  That night though, the temps dropped into freezing temperatures, but the water in the garbage bag simply radiated out heat all night long.  My tomatoes were happy.

Maybe this can help. 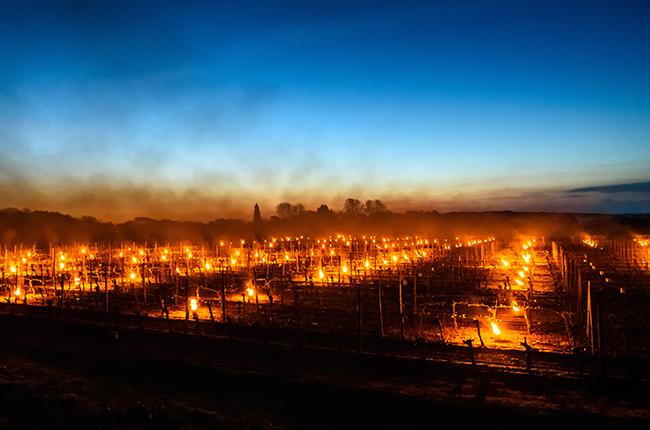 This picture is from Sussex England but I found others of French vineyards on hills being treated the same, in the article the picture comes from Here there's some other ideas, although helicopters might be slightly out of the budget!

Johannes Schwarz
Posts: 16
Location: Italian Alps, USDA 7
3
posted 1 week ago
@Eric
that seems like a good idea. It would basically be like my black water barrel in the green house on steroids. I use its thermal mass in a similar way

@Skandi
Yes, torches is what they use in many regions that I know too. But while it looks cool it works less on a steep slope with wind.
I've heard of helicopters and wind mills to stir up the air in a cold sink. But again, that method is more for folks in the valley (and naturally only viable for big commercial orchards). For the price of an hour of a helicopter I might as well install radiators near those trees pay a larger electricity bill.
Ellendra Nauriel
pollinator
Posts: 521
197
posted 1 week ago
I've known orchardists who used Christmas lights to protect against frost. The older incandescents worked better, but the new LED kinds still put out a little heat.
Johannes Schwarz
Posts: 16
Location: Italian Alps, USDA 7
3
posted 1 week ago
@Ellendra

that must look cool. I wonder though at which point a heating cable becomes more efficient. There are 30ft long cables consuming 100W which would equal to a single 100W bulb. Seems a more efficient way with lower running costs (though an investment) if the goal is not light but just heat.
Eric Hanson
gardener

I should have asked this earlier, but how many trees are we talking about?  The Christmas lights might work well, but you would have to get electricity to the tree.  Is that feasible?

Also, I am glad that you like the idea of the thermal mass.  If you have the water barrel in the greenhouse already then you are already familiar with this idea.  While my 5 gallon bucket worked in a light freeze, a deeper freeze would be better protected by something like your barrel, but you would basically need one barrel per tree and then find a way to heat all that water—all that may or may not be feasible, but might be worth a thought.