Who is growing a food forest?

Brenda Groth
pollinator
Posts: 4437
Location: North Central Michigan
29
posted 10 years ago
Yes Nick, the more advanced each food forest area gets, the less maintainence there is. The large apple tree and the pear trees basically have no maintainence other than keeping quack grass out if i can. The peach, plum, almond, fruit cocktail, sweet cherries are established well enough that I do no maintainence there either, and some of the nut trees.

The smaller newer areas are still getting their plantings established and so I'm removing weeds that are too rampant, like quack grass and bindweed..but they are also getting some annual plantings at this time under them.

I really enjoy the ones that are established, mostly all I really have to do is divide things that need dividing from time to time, like daylillies, comfrey, etc...and move the babies to other forest areas. this year I moved a lot of my divisions to the juglan areas and around my pond, and a few into the woodsy edges.

My son has been building a road through the farthest reaches of our woods right now, and I'm trying to find more fruit and nut trees to start deeper into the forests now that there are more sunny edges available, and we can access it much easier now.

Jeanine Gurley Jacildone
pollinator
Posts: 1459
Location: Midlands, South Carolina Zone 7b/8a
36
posted 10 years ago
Cris, I am interested in the Goji/wolfberry that you are growing. I am in zone 7b/8a so I'm thinking that if you are growing them I could too. Where did you get them and can you tell a bit about growing them? I don't want to hijack this thread so maybe another thread could be started about the wolfberry or you could PM me?

Nick, I don't know if this qualifies as a food forest; we have 5 old pecans that are serving as our highest point in the canopy, 2 pears, 1 plum, 7 apples, as the next highest point, then there are 5 muscadines, 6or 7 blueberries (need more). Currently just started a 'wild' area in the back that is not mowed and I feed the turkeys whole grains and kitchen scraps there. It has been successful already in that various grains are growing and going to seed along with sunflowers, clover and a lone tomato. We do have mulberries on the fenceline but I want to plant at least one in the middle of the poultry areas that can feed us as well as feed the birds as they fall. Three of the muscadines are in the poultry area so they fertilize the vines, keep insects at bay and clean up dropped fruit.

My goal is to have permanent food area growing that will feed both the birds and the people without maintenance from me other than management of the clean up crew and fertilizing machines (the birds).

I am only on 1 1/4 acre but I am pretty sure that we have not even begun to get as much productivity out of this space as we can.

Posts: 7926
Location: Currently in Lake Stevens, WA. Home in Spokane
333
posted 10 years ago
@ Jeanine,
Of the 100+ varieties of wolfberry (goji), there are 2 types typically grown here in the US:
Lycium chinense, the Chinese type typically found in health stores, and
Lycium exsertum, the type growing wildly in the Sonoran and Chiuaua deserts of Mexico and Arizona.
You probably don't want the desert type; the Chinese type grows larger bushes.

Seeds of both are available from J.L. Hudson, Seedsman

posted 10 years ago
I have all the major trees and about half the shrubs planted. I haven't started on any of the lower layers yet, except for one apple tree guild which is sort of an experiment. Here is the design (which we had done professionally): 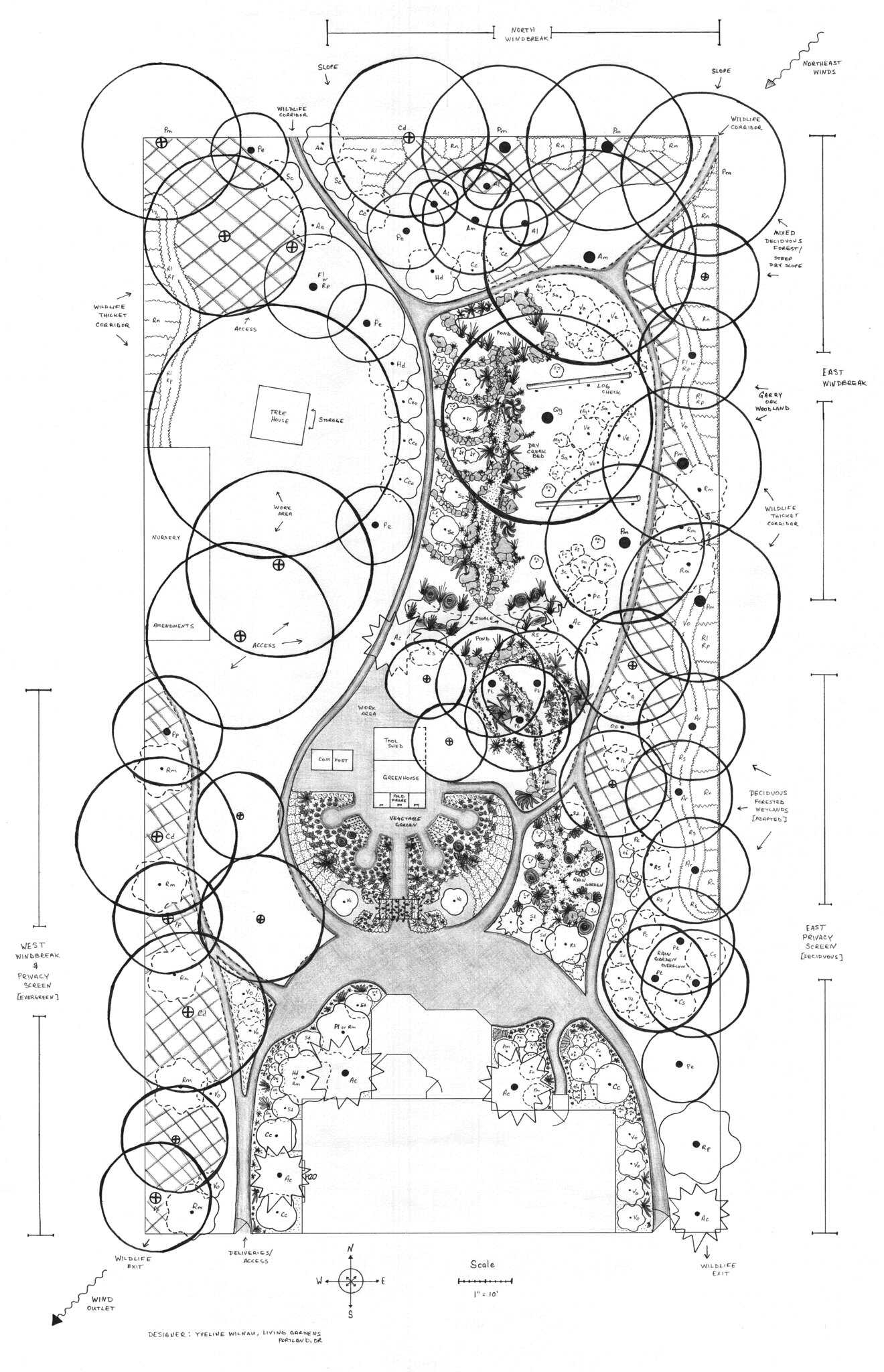 The trees I have include:
- Quercus garryana (Oregon White Oak, native tree for wildlife)
- Acer macrophylum (Bigleaf Maple, source of leaf mulch)
- Acer circinatum (Vine Maple, part of the natives theme, also good fall color - I want my food forest to look nice!)
- Alnus rubra (Red alder, part of natives theme, nitrogen fixer)
- Rhamnus purshiana (Cascara, native tree, berries for birds)
- Corylus cornuta (native hazelnut)
- Hardy almond, 2 varieties
- Several varieties of apple, including one that I grew from seed
- Several varieties of plum
- Several varieties of fig
- American chestnut
- English walnut (almost 3' diameter, was on the property when we bought it, fell over during an ice storm but is still growing well)
- Mulberry (died but I will replace it)

I also have many native shrubs. Originally we were going to have nearly all natives but I have been substituting more and more food plants. Not that I need lots of food plants, I would just like to go out in the yard any time of year and pick something to eat. If it all works out well, I will offer the surplus up to the local volunteer gleaners, who take half to the food bank and take half home.

I'll see if I can get a photo of my apple guild. It mainly consists of comfrey, mint and some kind of monster vetch which buries everything else. I am tired of the vetch though.
Guy De Pompignac
Posts: 192
Location: SW of France
1
posted 10 years ago
@Dave Miller : this is very dense planting !
Dave Miller
pollinator
Posts: 447
Location: Zone 8b: SW Washington
72
I like...


Yes, partly because some of the trees are very slow growing and I started them from seed so it will be mostly shrubs as the trees are growing. Also I want plants covering every square inch so I won't have to do much weeding. Our original goal was to have something that looks nice without much maintenance (thus the emphasis on natives).
greg patrick
Posts: 168
Location: SoCal, USDA Zone 10b
3
posted 10 years ago
We have a 1/4 acre urban lot and most of it is house. Despite these limitations we have 50+ fruit trees in the ground with plans for 70+. We have a nice mix of native anchor trees that bring in the birds, our pride being our 70' sycamore. Some of our trees are big and old and some just went in, but so far we've had constant fruit since late April. We have a layering system that seems to work: Big trees get the ground, medium trees get the raised beds, the third tier gets 24" pots so the roots don't compete, and everything else gets put into raised beds and 5-15 gal pots that are sitting everywhere. We have lots of ponds full of frogs and aquaphonic systems going in this summer. We top dress / fertilize / mulch everything with straw and muckings from the goat pens. Compost bins and vermiculture to renew the soil. We have the following residence living/nesting/hanging out here: Hummingbirds, bushtits, starlings, black phoebes, alligator lizards, pacific chorus tree frogs, California tree frogs, opossums, raccoons, fox squirrels, a red eared slider turtle (just showed up in our pond one day). Dozens of hornets buzz through the plants looking for lunch. Carpenter and bumble bees buzz through the potato vine and apples. We spend about $40/ month on water. Below the trees are raised beds of tomatoes, kale, broccoli, flowers, herbs, borge, plumeria and flats of sprouts for the chickens. We find morel mushrooms growing in our garden every spring.

The two things that I think bring the whole thing together are having the native sycamore and the ponds full of frogs. The sycamore is the soul of our lot and creates a safe place for birds. We have a flock of Cedar Waxwings that spends every spring here, and crows love to hang out in the tree too. It drops lots of leaves that go either into the goat's feed, into the compost bin, or directly into the garden.

We really have no 'problem' with bugs or weeds.

We water from the ponds to spread the beneficial soil bacteria and algae into the soils.

Spraying water into the trees in the morning attracts the bushtits who come for the water but stay for the bugs.

This year we've committed to converting the front yard into an orchard. So far we have four citrus, a pomegranate, four bananas, six cherimoya and three avocados doing very well.

I currently have 2 baby plum trees about 3 ft tall, and an acacia willow that's about 7 or 8. All just planted about 6 weeks ago. A blackberry and baby strawberry are struggling but still here. An esperanza/texas yellow bell is also slowly getting used to the place. It's not food but it is fantastic for attracting bees, butterflies and birds.

We also have wild mesquite that's semi thick on about a third of the property. Barely getting started but I look forward to having it all well established someday