How do I get water away from the walls of a 150 y/o stone house?

I'm renovating an old farmhouse in Spain. It has 2 ft thick stone walls that I'm in the process of repointing. During the winter, the stones absorb moisture from the ground and it seeps into the house, although much much less now that the inside is mostly repointed. I'm wondering what I can do to keep the water away from the house.

A friend of a friend in the US apparently had a similar house and they built a trench around the structure that was 2ft deep and 1ft wide and filled it with volcanic rock, and that kept the water away.

If anyone knows some resources or methods that I can Google, that would be super helpful. I don't even know what to punch into a search engine here.

Here's a picture of the house if that helps what type of stone it's made from: https://drive.google.com/file/d/1hLqF286fADfF2xTebzb-5QVetujFMmxM/view?usp=sharing

posted 2 weeks ago
It looks like it's built on a slope.

Where is the water coming in? Along the back where there's earth built up behind it?  If so, you will probably have to dig it out and put some form of drainage in.

We had the same trouble here when we moved in last year. Here's my partner starting on the job of removing several feet of earth. Still have a way to go but we stopped for the winter in case we got trapped behind there if there was a minor land-slip of wet soil. 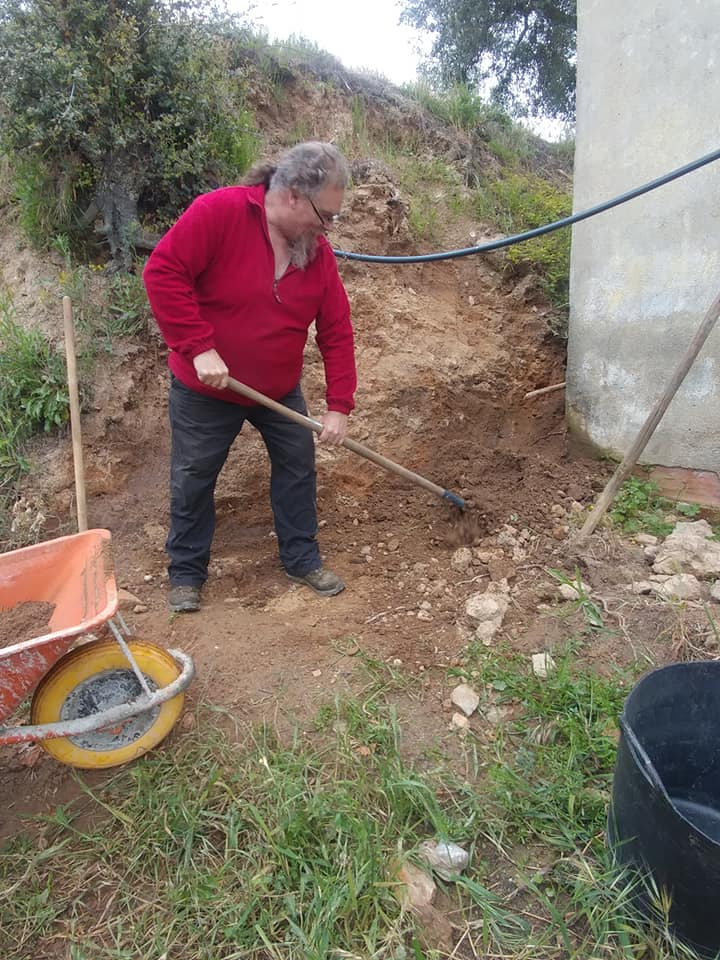 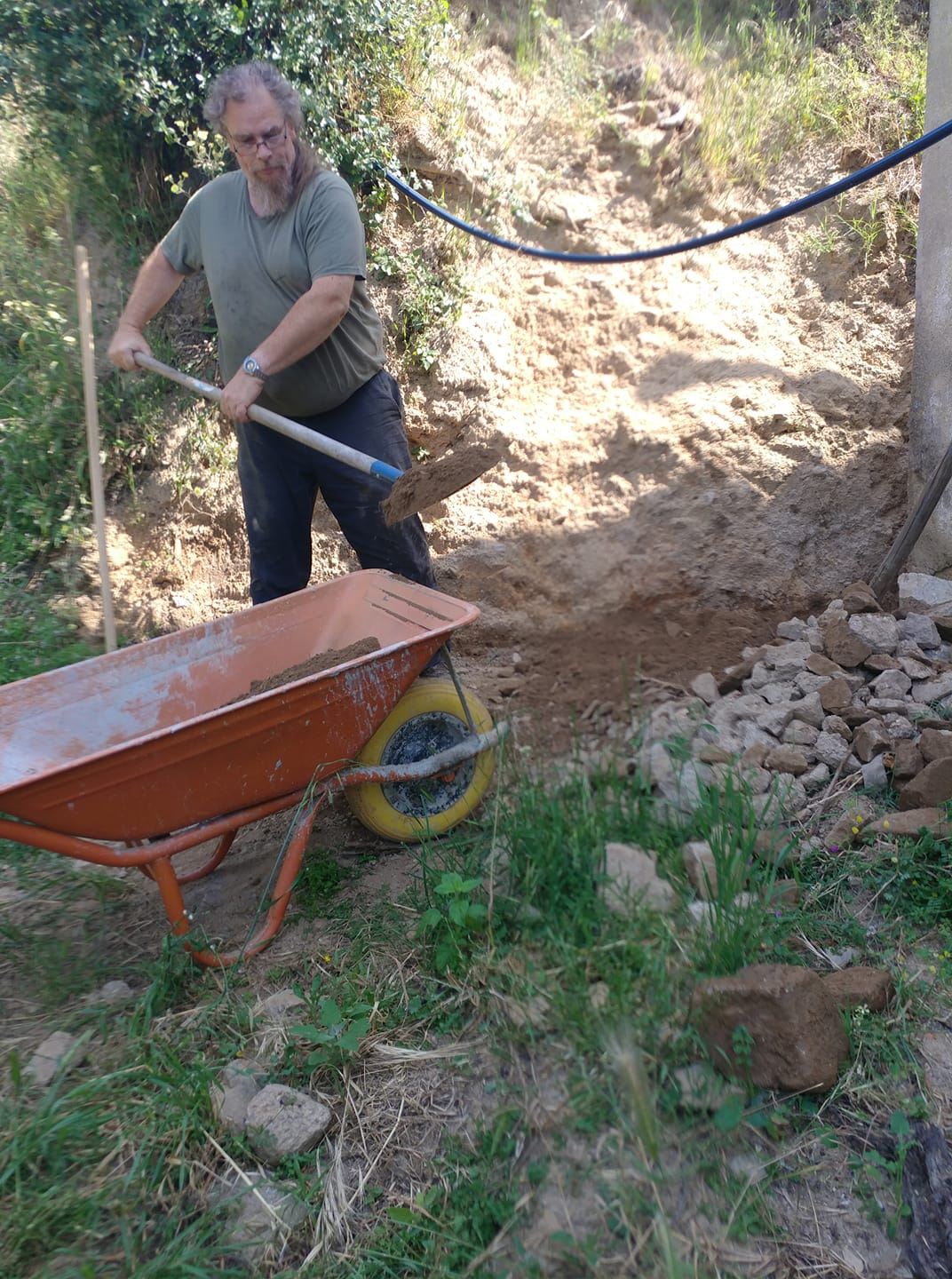 There's only a fairly narrow gap between the wall of the house and the terrace wall, which might look like earth but it's actually cut out of the rock. We don't like working behind there unless the soil on the terrace behind is very dry in case it slips when someone is behind there! 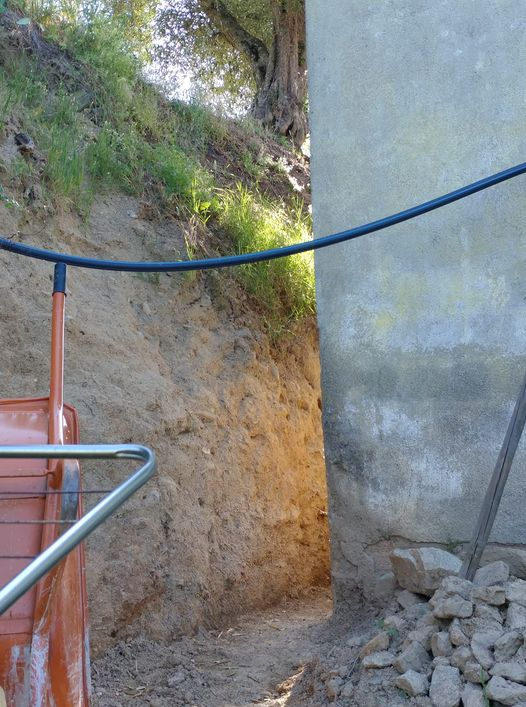 We only did half last year. The picture below shows the wall during heavy, prolonged rain where we have dug the soil out. 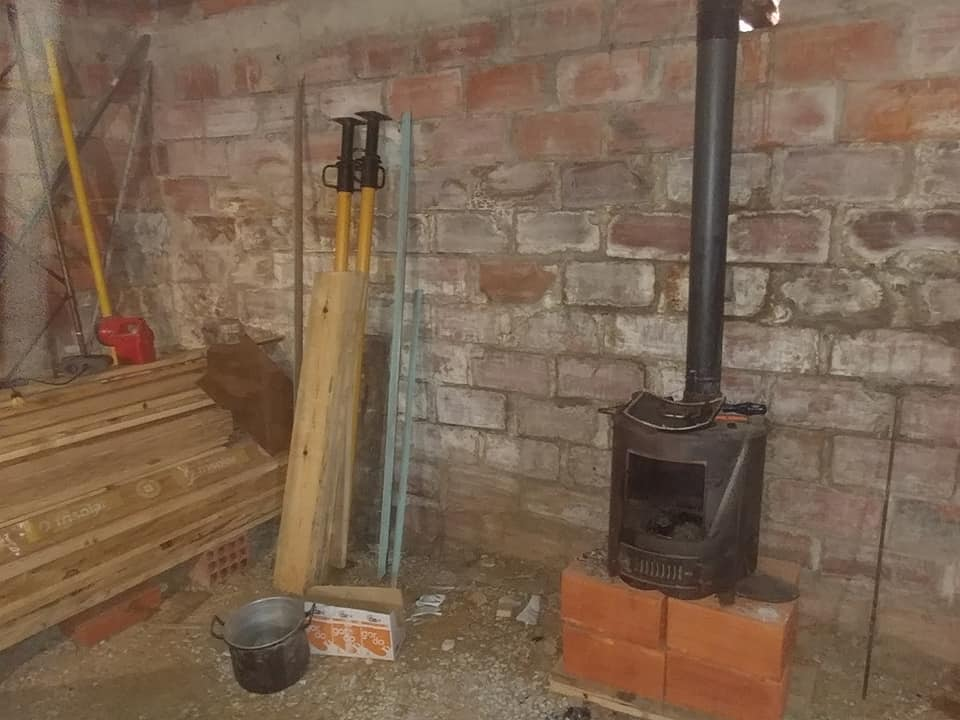 And this photo shows the side that still needs to be dug out...

posted 2 weeks ago
We've had the same problem with our stone house on Skye.  Not so old (only 1920s) but they didn't worry too much about damp proof membranes....We had a stream running under our study floor when it rained.  Digging a drainage trench round the back and putting in a drainage pipe cured it for us.  Still need to do the rest of the house, but we'll get round to it sometime....
Looks like yours will be most difficult on the right, since the damp will be coming in under the road there, and I guess it's not so easy to dig the road up!  You could look for damp proofing cellars/ basements and see if you can find anyone who has actually done it as opposed to someone selling a method.  Keeping it from coming in the stone in the first place by relieving the water pressure is obviously best long term though.

I had some thoughts but Burra summed them up much better than I could.  And she had pictures.

All I can add is a rather traumatic childhood experience.  I was about 7 years old and our house had a slight negative slope behind (meaning the ground sloped towards the house).  One spring we had torrential rains so bad that the static water pressure behind the wall (in our case it was cement blocks) actually broke the wall!  One section cracked and moved in about an inch.  My father called neighbors, got all the lumber he could round  up in the neighborhood and braced the cracked and moving wall (really we should have evacuated but the house was new and my father was determined to save it).  As soon as the cracked side was firmly braced, the opposite side cracked and moved in about an inch so that side got braced.  Then the middle.  Eventually the wall was semi-stabilized and the basement looked like a wooden spiderweb.

The long term solution was to excavate a trench out behind the wall, rebuild the wall and refill the trench behind with gravel with two additional sump pumps in addition to the one we already had.

When I built my house I built it in a place where I could have a gravel filled trench but instead of a sump pump I had a simple gravity drain, and a little tube empties passively into the valley below.

I know it would be a lot of work, but is there any chance you can dig a deep trench, lined with a slotted tube that drains downhill and fill the trench with gravel?  Again, I know it is a lot of work, but this really moves the water away before it can get at the wall.

These are just my thoughts and take them for what you will.  That old basement never leaked or cracked again after having the trench and gravel put in.  It was so dry it was practically dusty, as is my present basement.