Self care is Earth care - will hedonists save the world?

posted 1 week ago
This is just a number of musings, in which I'll try to stay on the positive side.
I'm recently connecting the idea of permaculture with cooking gourmet food, and some ideas from people who aren't involved with either, but they seem to do the right thing in the hedonism department.
I looked up the word here on permies, and it's been used both in negative context (e.g.: "consumerism, materialism and hedonism"), and as a positive ("hedonism isn't necessarily selfish").
Seems like a lot of what I'm thinking about is in Paul's book "Building a better world in your backyard" - that doing the right thing can be easy, interesting, pleasant and ultimately very healthy.
Of course, sometimes people don't seem to know what's actually good for them and their surroundings, and make decisions based on fear, or their insecurities, and that leads to all the disasters... but those who do practice permaculture successfully - aren't they doing it mostly for pleasure?
It's been said many times, that a lot of "beginner environmentalists" seem to believe that they need to deny themselves things, such as certain foods or activities. But with permaculture approach, we actually get to have more of these things - better food, more activities, more time and energy to do things. We also get to have deeper and more meaningful connection with others, whether it's about helping to do some jobs, or teaching, or exchanging goods. And the intimate relationships, too - in all cases we just have to learn to say both "yes" and "no" in a healthy way, and to communicate what is it that we're into (or not), as well as care to hear it from others.
I remember an interview in which an actress was asked by the journalist: "What is your guilty pleasure?" and she said: "I don't think that pleasure should be guilty."... while it does sound controversial (and it's much easier to say when you're a living goddess), I do agree with her... from the perspective of a "hedonist permie". I wonder how far we can go with that idea.

One more inspiration came with a Quora answer that got emailed to me earlier today in a digest. Here is the link: If I am ugly, single, poor, unlovable and unhappy, is my only chance at happiness/inner peace in this life through attaining spiritual enlightenment and destroying my ego identity? A short summary of the coolest answer: no one is unlovable; "unhappy" is a temporary state, although uncontrollable - but the happiness conditions are not an unchangeable script; there are a veritable metric fuckton of good people, who don't care about someone's external appearance (I totally want to be counted as one of that fuckton of people, also my new favourite word!).

John Weiland
pollinator
Posts: 1764
Location: RRV of da Nort
347
posted 1 week ago
Shooting from the hip a bit here in my response.

I suspect if one were to draw two circles, one in which you accumulated behaviors that were 'wise' and the other in which you positioned behaviors described as 'hedonistic', the two would overlap partially, but not totally.  It would seem the discussion would get pretty murky in short order as one contemplates the notion of 'pleasure', the concept of which for each person will differ and undergo modification over time.  Added to this is the notion of "right thing to do", the culmination of which may bring some measure of satisfaction without really being experienced as 'pleasure'.  As an example, imagine sitting down to your favorite piece of cake, that you could immediately eat yourself (hedonism) or alternatively only a portion of as your mind and senses go over all of the positive and negative ramifications of saving some for other members of the household, family, tribe, etc.  By saving it, there may be myriad benefits to self and others, both tangible and intangible, which nevertheless would not be characterized as 'self pleasure' but might be construed more as 'the right thing to do' for family, community, tribe harmony and stability.  Possibly overly romanticized, many treatise on hunter-gatherers document(ed) the general satisfaction with a life that was robust in a sense of self, sense of community, and sense of one's place in the cosmos, without much focus specifically on the notion of pleasure (see an excerpt from Marshall Sahlins below).  The opposite of the hedonistic approach would be self-denial, a position going at least as far back as the Ascetics and why that notion has not gripped the planet's population is not difficult to comprehend.  I suspect that most of the younger environmentalists who may be taken by this fever eventually move away from it with time.  Nevertheless, one needs to be cognizant of the fact that "lack of" is not the same as what the Ascetic was seeking, and the phenomenon of simply 'not needing' can fall into a category loosely described as 'wise, thoughtful, comfortable, and possibly happy', without necessarily requiring a great deal of hedonistic engagement.

Although 'affluence' is not the same as 'pleasure/hedonistic', the modified passage below from the introduction to Sahlin's "The Original Affluent Society" is a view that agrees with many other observations on hunter-gatherer societies I've come across and seems to make sense to me.  Passage is from  https://appropriate-economics.org/materials/Sahlins.pdf
Affluence.PNG 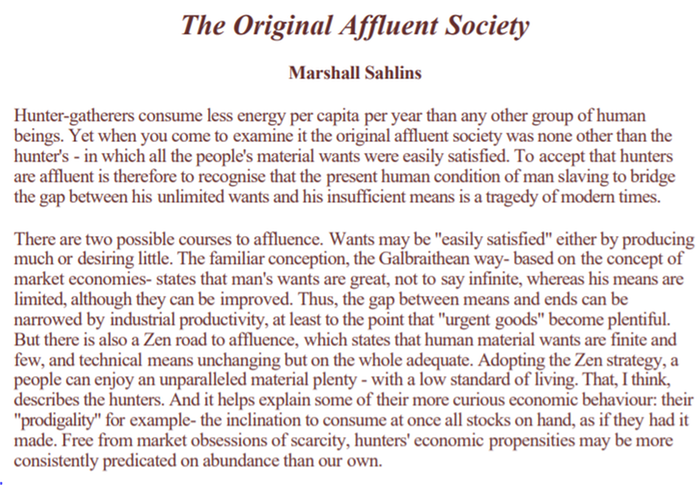 John Weiland wrote: As an example, imagine sitting down to your favorite piece of cake, that you could immediately eat yourself (hedonism) or alternatively only a portion of as your mind and senses go over all of the positive and negative ramifications of saving some for other members of the household, family, tribe, etc.

Why only eating the cake yourself would be hedonistic? Sharing is caring! Imagine baking a cake only to watch others enjoy it, which would be your main source of joy, besides tasting it yourself, and any other pleasant contexts of the sitiuation.
Also, I remember some research which said, that giving gifts is more fun than receiving them (that can be for a number of other reasons, too...).

As for your qote - now a combination of Zen and hedonism would be bold, haha. But I think it can be doable... see simple pleasures of the day, for example?