posted 3 months ago
Hey All:

Good news - my girls are making honey & lots of it! ....problem is we're getting close to being honey-bound here.

I started the season with a weak hive which is now firing on all 8 cylinders. I had them in one deep in March and added a second deep to the bottom in April - hoping the queen would move down and lay in the bottom box. She did not and they filled it with honey instead.

The upper deep is now mostly honey with some spotty laying where there is room.  I added a honey super a couple weeks ago to give the hive some space and they just about have that filled with honey but not capped-off yet. I just added another honey super below the full super and pulled one capped frame from the top brood box and replaced it with some drawn comb.

Found the queen and she looked slimmed down but didn't see any swarm cells in the upper box (didn't check the bottom one). Hoping they have enough room until they cap-off some of these frames and I can swap them out.

Looking for advice on what to do here about making more room for the queen to lay. I should probably attempt a split, but this would be my first time and not quite sure how to go about it or what method to use.

Also wondering if it's a good idea to swap boxes around or not. I have some extra deeps I can use, but not sure how to go about placing them at this point. I would like to remove the bottom deep (mostly upcapped honey) and put a fresh deep on top of the remaining deep (currenty mixed brood & honey), but also don't want to mess with the hive too much. But these deeps are getting heavy!

Any thoughts or advice would be much appreciated. 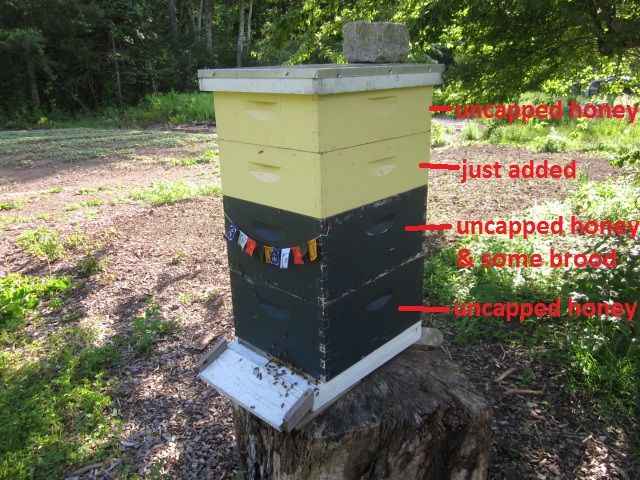 Posts: 3691
Location: woodland, washington
180
posted 3 months ago
I very rarely super, but that would be my first inclination if a hive was at risk of honey binding.

brian lee
Posts: 8
1
posted 3 months ago
Its been my experience that queens move up, if it were mine I'd move the brood to the bottom, the empty hive body just above that, and remove frames of honey as they are capped
Pete Podurgiel
pollinator
Posts: 166
Location: S. New England
69
I like...

brian lee wrote:Its been my experience that queens move up, if it were mine I'd move the brood to the bottom, the empty hive body just above that, and remove frames of honey as they are capped

That's a good idea, I will probably do that. Just debating whether or not to wait and see what they do with this empty super as it sits or just swap them around now.

Seeing how they were filling-up the deeps with honey so fast, I half-expected the queen to move up and lay in the very first super that I added, but much to my surprise she didn't. I've often had them do that on me before, even when they had plenty of space down below. Almost added a queen excluder at the time just for that reason, but thought it would be best to give her the option to move up if she wanted to. Looks like loading-up on honey is priority #1 right now ...good girls.

posted 3 months ago
I would probably swap the empty super for an empty deep & follow Brian's suggestion. I would do it sooner rather than later.