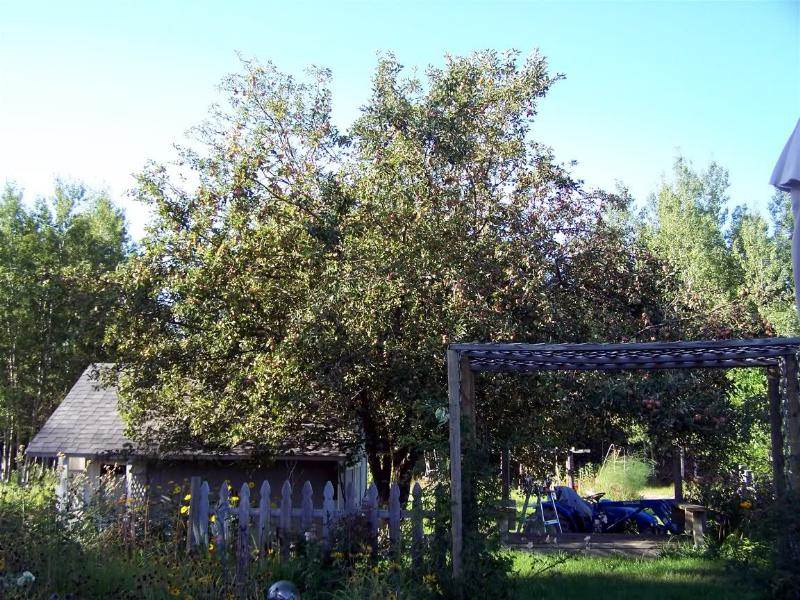 this is a photo of the one in our yard..it is about 15 years old or so..and bears heavily every 2 or 3 years..it is a midseason apple and it was grown from some that were thrown out ...who knows what..tart but good taste, crisp..red with a bit of green on when ripe.just ripening now. 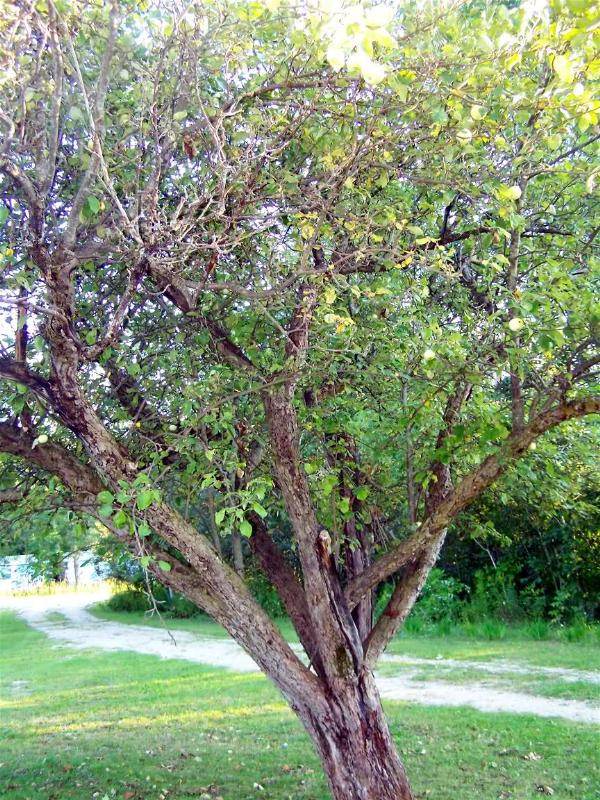 This apple tree is between 45 and 50 years old, bears heavily every other year, and was planted by my father in law from the core of a transparent apple..and came true to type..it was loaded but they harvested most of the apples off of it this weekend..and so there are a few left on it..it could use a good deal of pruning..but it no longer belongs to us..sold the property that was our inlaws, next door. 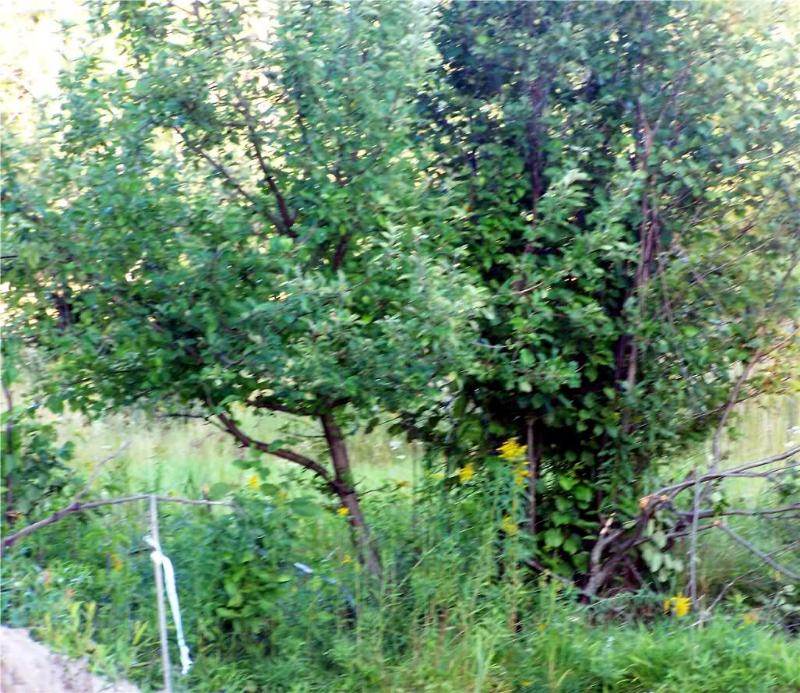 this is the apple tree by the pond, the pond is this side..but you can't see it in the photo..it was growing right out of the center of the alder bush (we saw the flowers this spring)..Ron and I broke away a few of the alder bush trunks so we could get to the apple tree (right) to harvest the apples..these are the ones that were a green with yellow and had mottled skin..they were very very sweet and dry and we put them all in the freezer this morning after peeling and coring them and cutting them up..will make pies later. 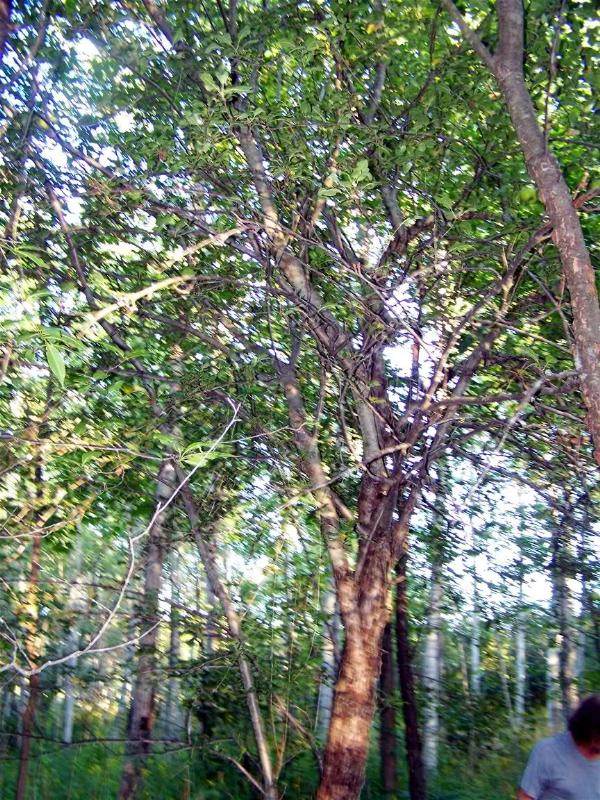 this is the apple tree we accidentally found this spring in the woods..it was in full bloom and surprised us..just like the one above..if we hadn't been looking at the right time we would have never even noticed they were there.

we know how it came about..there is a deer run right under the apple tree and it is by an old horse barn..well..hubby used to put piles of apples by the deer run for the deer, and he would sit in the horse barn and hunt for a deer for our freezer when we were first married..so this apple tree happened from the deer feeding..

the apples on this tree are not ripe yet..and there are NOT a lot of them..they are green at this point and have a tiny bit of blush coming on. They are very tart and so we aren't sure how they'll turn out when they are ripe..yesterday i broke a gob of dead branches off of the bottom part of the tree..it is among a large group of ash, aspen, wild cherry and other trees..which were full of tent worms this spring..which we did spray.

my intentions were to get back here to prune around the tree to open up the area to light and air when i was able..well i haven't been able yet..and it is very conjested..don't know if you can see that trees are growing up through the branches of the apple..

anyway, these are photos of the four wild apple trees that we still have on the property..there were about 4 to 6 others that were destroyed after our housefire when the old house was removed and new put in..so we are blessed to have these 4 around..one belongs to the neighbors now..but they are generaous and have told us to help ourselves..that is the transparent..but the other 3 are ours..we also have boughten grafted apple trees, but by far the wild ones are far more prolific..

posted 11 years ago
They seem plenty big considering their age!

Thanks Brenda, this is excellent stuff!

Brenda Groth
pollinator
Posts: 4437
Location: North Central Michigan
29
posted 11 years ago
yeah age is a guess on those wild ones in the woods and by the pond esp..as i wouldn't have even known they were there had i not seent he flowers..the one by the pond is surely the youngest..you can tell as the bark isn't as gnarly..the one in the woods had a lot of dead on it..so it is older..but it is so crowded by other trees, that it is hard to tell ...it needs a lot of work. The one in our backyard I'm also not sure about..but i do remember it NOT being there..when we built the shed (which i built out of salvaged pallets..screwed together..oak ones..that was a challenge)

and the one in MIL's old front yard that we sold to the new neighbors..that was here before we moved here in 1971...and it was full size bearing tree at that time..so i know we have lived here 38 years..so it has to be more than 40

honestly the grafted trees we have bought haven't done as well as the from seed ones here..it is kinda funny hearing people talk about questioning people growing apples from seed..it has been done like this all over Michigan for many years..there are wild apple trees in the woods and old farmsteads in lots of areas..as well as pears too..we did have a from seed pear tree many many years ago but the ants killed it..we now hae 3 grafted pear trees we are trying to get goint..