Slug Gunk... at experiment in home made "nemaslug"

posted 7 years ago
After a discussion on here a few weeks ago, and some further research, I've been running a small experiment in making my own batch of slug eating nematodes.

The basic idea is that you collect a whole bunch of slugs from your own garden, which will naturally have a low nematode population. You keep them in a crowded and unhealthy jar - think a slug slum - so that they survive for a week or so picking up nematodes from each other. Eventually the slugs sicken and die releasing lots of nematodes into the liquid. Dilute the liquid in a watering can then spread around your garden. The nematodes hunt out slugs in and on the soil and kill them within about a week. The dose should last about 6 weeks in the soil, before needing to be repeated.

So far I have:

Collected slugs: Use a head torch, a pair of BBQ tongs and a glass jar from a can of instant coffee (plastic lid, easy to punch a couple of small holes in). The head torch is nearly essential so that you can manage the jar and the tongs. Slugs already in the jar try to escape as soon as the lid is open, so it is a bit of a juggling act!

Run a slug slum: Very easy - just shove around 30 mixed slugs into the jar with a bunch of leaves from plants they have been feeding on, and an inch or so of water.

Produced Slug Gunk: Ok, so this stuff does smell... not as bad as you might fear, but it is a bit whiffy. Put it somewhere shady and cool. Ideally keep feeding them fresh leaves - I failed on this part as I had to visit inlaws for 10 days and couldn't find a willing volunteer to open the slug slum and feed the poor darlings. After three weeks the jar contained pretty much unidentifiable brown mush. The slug carcasses had gone.

Now I have no idea how effective this will be, and our slug population has been quite low this year anyway. To try and get a feel for effectiveness I'm going to patrol the dosed beds for a few evenings this week. I'll collect slugs for a second batch of slug gunk and look out specifically for slug suffering from nematode infections (they look sick and apparently get swellings). I'll report back when I have an idea of it's successfulness.

John Elliott
pollinator
Posts: 2392
90
posted 7 years ago
A worthwhile experiment, I wish you great success. I'm trying the same thing with a new pest to our area, the kudzu bug. You might think that a bug that munches down the dreaded kudzu would be welcome here, but it doesn't just stay on the kudzu, it has an appetite for ALL legumes. Last fall, they swarmed my clover, so this fall I am going to be prepared for them.

I do have an improvement on your method though. Use a plastic bottle with a screw cap. And put a bunch of pinholes around the base of it, so that when you bury it halfway in the garden, a lot of the holes will be below grade. The slugs will still be trapped inside and die, but any curious nematodes in the soil can find out what's going on, get a free meal, and raise a few thousand offspring.
S Carreg
Posts: 260
Location: De Cymru (West Wales, UK)
1
posted 7 years ago
Thank you for sharing this, I am going to try this!
Adam Klaus
author

posted 7 years ago
Ok, well results are inconclusive at this point.

We have had so few slugs this year anywy, that i can't actually tell if the area it was applied to has a noticable drop in population. Literally i'm lucky to see one or two out per evening right now.

I'll definitely be trying this next spring, although i might use some commercial nemaslug as a starter.

Michael Cox wrote:Ok, well results are inconclusive at this point.

We have had so few slugs this year anywy, that i can't actually tell if the area it was applied to has a noticable drop in population. Literally i'm lucky to see one or two out per evening right now.

I'll definitely be trying this next spring, although i might use some commercial nemaslug as a starter.

Keep at it! Be motivated! Have you talked to your neighbors and used them as experimental controls?

This is exactly what frosts capitalists about permaculture -- you're developing your own product with your own labor and materials and not spending anything on their marketed products. It's exactly what needs to be done and what research grants are not going to fund. I'd hold off on using the commercial nemaslug as a starter. Develop yours to the point that you can do a head-to-head comparison with the commercial product.

This is important stuff to be doing. I'm going to give you another apple for it. Hang in there!
Michael Cox
pollinator
Posts: 3013
Location: Kent, UK - Zone 8
408
I like...

posted 7 years ago
Still few slugs evident, and little sign of fresh damage. I've gathered another dozen or so slugs to start the next batch, using some of the old mixture as a starter.

Victor Bonjour
Posts: 7
Location: Switzerland (equivalent zone 6b-ish), 750m (2500ft) elevation.
posted 7 years ago
I just came across this method and must say it fascinates me. Experimental biology AND slug control at the same time? Count me in!

First, let me describe my situation.

My main garden is about 5x15m (15x45 ft). I have a couple other experimental patches around the house. Mostly, I grow edible perennial bushes, a few vegetables, cereals and pulses. I have a 3x9m (9x27 ft) woodchip zone, a hügel bed, a straw-mulched flatbed and a woodchip-mulched half-hügel bed.

And I have big slug problems. They are in all garden beds and decimate squashes, sunflowers, amaranth. Rye (newly planted) and lentils also suffer considerably. Only favas and runner beans seem to survive, thought even runner beans have been wiped out of one of the experimental patches (nothing remains in that particular spot). The slugs mostly keep out of the big woodchip zone, thought it might be because I mostly grow sunchokes there.

I do have 3 tiny ponds sheltering tadpoles in the main garden area, but I expect they're too young to be effective yet. Indeed, the oldest one is barely a year old.
I have set up beer traps, and they do catch slugs, but it doesn't seem to be making a difference.
I have made tiny greenhouses out of PET bottles by removing the bottom and placing it on some amaranth plantings, but about half of them still got eaten.
I occasionally did go out at night with a pair of scissor, but it gets old fast. 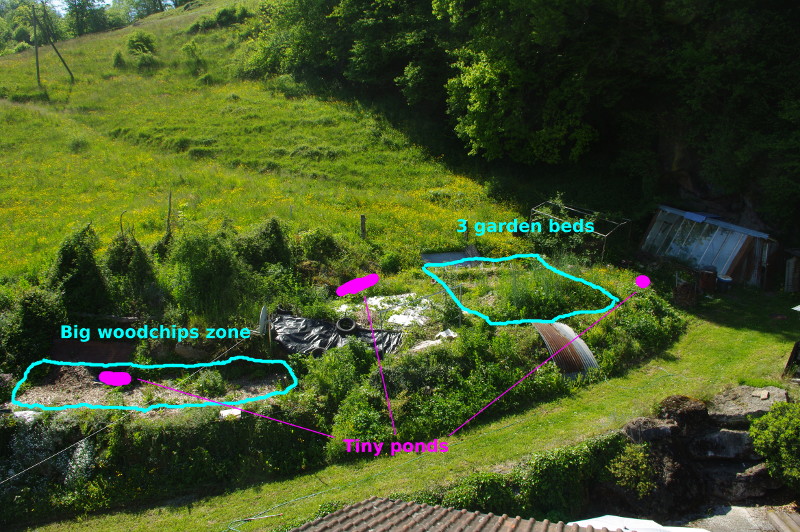 (click to enlarge)
Main garden area. Greenhouse is south facing. The area is very close to both pasture and forest, which may or may not encourage slugs.


Now to the main point. I'm going to try that nematode-culture thing (by the way, they're named Phasmarhabditis hermaphrodita) and see how it affects my situation.
I just gathered 40 slugs (didn't mean to catch this many but I couldn't stop) and have put them in a 4l (1 gal) can, along with a bit of water and buttercups. I'm going to wait 2 weeks and feed them as I go. I'll post back results.
As much as I love science, I can't really be bothered to set up a control area, so that'll still be anecdotal. 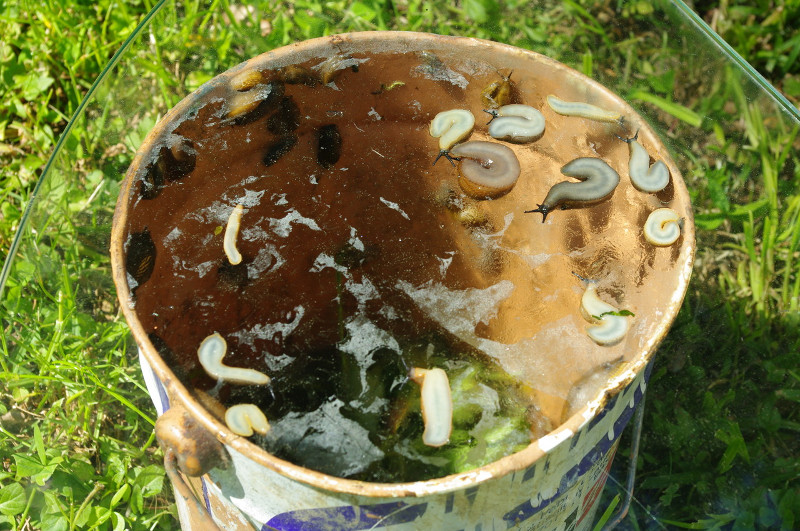 (click to enlarge)
Slug ghetto, one hour after harvest. Container was moved in the sunlight for the picture. I dare not remove the glass now.
John Elliott
pollinator
Posts: 2392
90
posted 7 years ago
I'm glad you have revived this thread, Victor.

My only suggestion would be to take some and put them in a container that has tiny holes (~1-2mm) and is buried part way in the soil so that nematodes can get in and out, but slugs can't. That way the soil nematodes can seek out the sick and crowded slugs.

Be sure to post your results, even if they are only so-so.

Shane McKee
Posts: 108
Location: Northern Ireland
12
posted 7 years ago
Fascinating stuff! So I'm now thinking of a contraption that does this continually with minimal input... how about a sort of one way trap for slugs to fall in, join the slum, culture the nematodes, they can crawl out under their own steam & infect more? Like a self perpetuating plague pit?

*crawls off to try this out*

Victor Bonjour
Posts: 7
Location: Switzerland (equivalent zone 6b-ish), 750m (2500ft) elevation.
posted 7 years ago
Well after 16 days the slugs still look plenty healthy. They eat a lot. I don't think I'm going to release them yet.
Shane McKee
Posts: 108
Location: Northern Ireland
12
posted 7 years ago
Mine are plenty smelly & die fairly quickly once I put them in. I haven't extracted any of the gunk to look at under the microscope yet. I've tried tipping a little out around the spinach; haven't noticed any major effect "in the real world" yet. One interesting thing is that occasionally the slugs will hit one plant in a row, night after night, but leave the ones beside it untouched. Any thoughts on why that is?

Victor Bonjour
Posts: 7
Location: Switzerland (equivalent zone 6b-ish), 750m (2500ft) elevation.
posted 7 years ago
My slug-ghetto is smelly too, but still very much alive. Do your dying slugs show any particular symptom? You can find interesting images if you search for "Phasmarhabditis hermaphrodita".

I'm witnessing what you describe on my sunchokes too. My reasonning is that once a plant gets munched on, it's going to send out new leaves. And we all know that slugs love fresh, new, delicious leaves.
Once younger sunchokes emerge, the slugs move on to them and start bullying them in turn, forgetting about the older ones.
Well that's my theory. Thankfully sunchokes can cope with a lot of bullying.

Shane McKee
Posts: 108
Location: Northern Ireland
12
posted 7 years ago
Hi Victor; once my sunchokes got above a few inches, the slugs seem to have left off. Actually, over the past few days I've noticed a significant drop-off of slug activity (still the occasional one) compared with a couple of weeks ago. Maybe it's because we're into June, and they go on holiday, or maybe my initial slug-gunk treatment has had some effect! Man, it smells BAD! Like the sort of stuff I imagine Sepp Holzer puts on his boots

[Northern Ireland - it rains a LOT here, so it's slug city, generally].

Victor Bonjour
Posts: 7
Location: Switzerland (equivalent zone 6b-ish), 750m (2500ft) elevation.
posted 6 years ago
It seems that I had forgotten this thread. Sorry guys. I had health issues and had to give up the experiment.

In conclusion, the slugs were still doing well after 3 weeks, when I stopped feeding them. So either the local slugs are particularly healthy, the incubation time was too short or my container was too big (ie. not disguting enough). Either way it didn't work for me.

I did not try spreading the (now dead, thankfully) slugs around the garden. Maybe I should.