I recently have been in contact with the guy who founded Clawhammer Supply. Long story short, he is a pretty damn awesome dude, and here is a little bit more about him. Basically he got super into brewing beer and it led to distilling alcohol and then it turned into him realizing how vital distilling equipment is for any survival situations.


He wrote this summary for me basically explaining the importance of this distillation equipment:

"Stockpiling is only a partial solution to emergency prepping. To truly be prepared, one must have provisions to
replenish their most highly valued consumable goods. Consider this: simple, small-scale, distillation equipment
can be used to make distilled spirits (whiskey, rum, vodka, etc.), fuel alcohol, antiseptic, and distilled water – all
highly valuable during an SHTF event.

For obvious reasons, whiskey doesn’t make it onto many emergency preparation lists. Even for the most avid
whiskey fans, distilled spirits would be far from a necessity in a survival situation. However, consider this: In
America, whiskey was used as currency during the American Revolution. In a situation where luxuries are, at
best, hard to come by, and worst-case, non-existent, whiskey could be a great item to barter with. A simple pot
or hybrid still can be used to make corn whiskey, Tennessee Whiskey, Bourbon, rum, vodka, and more.

Almost every survival prep list includes fuel, which has many uses. Solid fuel (such as wood) is very abundant
in most areas and can generally be easily replenished. However, liquid fuel (such as gasoline) has a
limited shelf life, is susceptible to theft, and won’t be easy to replenish in an event that cripples supply-line
infrastructure. However, ethanol, a clean burning, highly versatile, gasoline alternative, can be used to power
small engines, to move cars and motorcycles, heat, cook, and much more. It can also be easily produced in an
inexpensive, simple, column still.

Humans can’t live more than a week without potable water. There are many ways to clean water, some more
effective than others. For example, boiling water will kill microorganisms but it won’t purify. Filtering will remove
most microbes and pollutants, but good filters become clogged over time and need to be replaced. Distilling is
a highly effective way to remove impurities, and a good still can be used to clean water through thousands of
cycles.

Clawhammer stills are 100% copper hybrid column stills that can be used to produce whiskey, fuel alcohol,
clean water, essential oils, and even disinfectant. They’re available for purchase in a DIY kit format, which
keeps quality high and prices low."

Here is a picture of a 10 Gallon Still 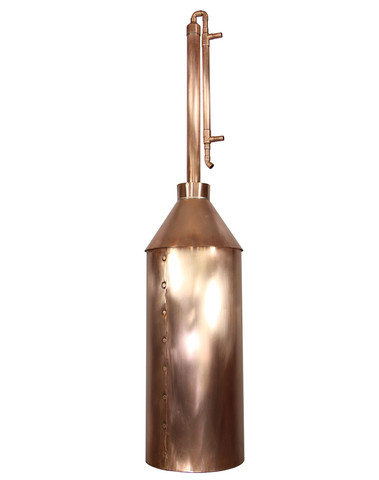 
Kyle also has put out tons of free videos up on how to build your own distillation equipment!


You can see the other six here: Moonshine Videos

Kyle has all sorts of other items like the Copper Moonshine Parrot Kit on amazon.


Here is a picture of the 1 Gallon Moonshine Still 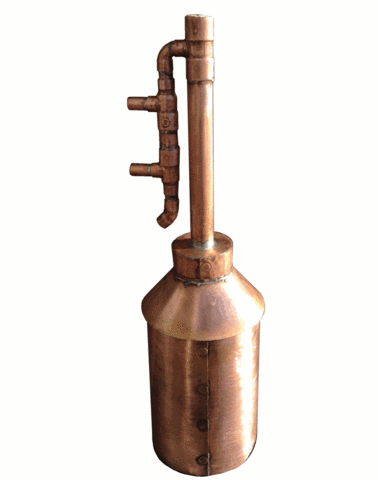 posted 6 years ago
While distillation may be useful in a survival situation, it is questionable how useful the stills shown would be in those types of situations. If you look at the condensers, you'll notice how tiny they are relative to the boiler. That's not a problem when you have an abundant water source that you can flow through the condenser at a constant rate. In the pioneer days (or modern TLC shows

) the condensers used by distillers were typically comparable in size to the boilers because they didn't have readily accessible pressurized water.

R Scott
pollinator
Posts: 3682
Location: Kansas Zone 6a
133
posted 6 years ago
Have you priced copper lately? Those big worms are worth more than the rest of the still!

I could set up a hand or solar pump to circulate water a lot cheaper.

R Scott wrote:Have you priced copper lately? Those big worms are worth more than the rest of the still!
I could set up a hand or solar pump to circulate water a lot cheaper.


3/8" copper tubing runs about a buck a foot while half inch is about $1.20 a foot. Maybe if built the water jacket out of copper it would cost as much as the rest of the still, but that would just be for showing off.

Amedean Messan
pollinator
Posts: 928
Location: Melbourne FL, USA - Pine and Palmetto Flatland, Sandy and Acidic
41
posted 6 years ago
Not bad, definitely looks more characteristic of an old era. I like Hillbilly Stills product line but it's a bit more expensive. Copper does not perform as well as stainless steel container for the practical functions of a mash pot. Your going to pay for the benefit but the engineering of the product looks more modern and durable.

Iorweth Caradog
Posts: 29
5
posted 5 years ago
Im using one at the moment made from a ss bread bin. Copper head made using some offcuts from around the house, only thing we had to buy was the silver solder, i use an elextric water pump although you could run it off any water source as long as you got a head or some pressure.


I found this working model from the 15th century, Copper was even more valuable then! Note the cooling cap that was placed on top of the condenser

For the Good of the crafts Big AL

Bauluo Ye
Posts: 42
posted 5 years ago
@ Iorweth Caradog. Interesting idea to use a rocket stove. The tricky part is after you reach 78C I guess. Do you have to add a twig or so every couple of minutes for hours? When in need, we all would of course. Cheers

The things you regret on your deathbed are not the failures, but those things you wanted to do but didn't dare to manifest.

posted 5 years ago
- I try to always check to make sure that I have used a ''working link'' ! In this case the part about making distilled spirits starts at 46:55

Sorry if you had a few early bits you didn't fancy ! Big AL

Iorweth Caradog : How is the old gentleman -your familiar doing ? A.L.

Chelsey Moter
Posts: 1
posted 4 years ago
I purchased a copper still for making essential oils and read that it's also great for distilling water. I got mine from the Whiskey Still Company. They have a lot of good info about distilling on their blog which is useful if you're a first time distiller. Plus, they can be used to make a whole lot of other things that could come in handy in the event of a Doomsday