Recessed RMH? Not so sure

Jacob Nielson
Posts: 18
Location: Texas - Zone 8
2
posted 6 years ago
I have a friend who is building a house, he wants a Rocket Mass Heater for his ultimate backup heating device for when times get tough. Yes I know it would be better as his primary but he wants to keep up appearances some, you know Jones and all...

So he asks me "What if I put the "bench part" recessed down in the slab, so it is flat with the slab..." I explained that well, you'd would still have the mass there but the exposed surface area is now far less, plus the earth can absorb a lot of energy.

Then there is the combustion chamber, kinda hard to hide that... cob and such it could be disguised some.

What's your thoughts? Does recessing it make any sense, I am trying to encourage him towards either having a "standard" RMH or have the materials on hand and build it when the time comes, though that makes it hard if he hasn't built it before.

I also am strongly encouraging him to get the DVD's and either hire Ernie and Erica or at least visit one of their workshops.
allen lumley
pollinator
Posts: 4154
Location: Northern New York Zone4-5 the OUTER 'RONDACs percip 36''
61
I like...

posted 6 years ago
Jacob Neilson : Mr. Jones is a product of his generation,Heating units should be out of site and out of mind, Until he is a guest in someones home who has one of these units,
his mental process Literally blinds Mr Jones to The requirement that a Rocket Mass Heater R.M.H., needs to be in the heart of the home !

There are only Two possible outcomes to every R.M.H. build The 1st outcome comes in two versions, The R.M.H. was Sited in the heart of the house as a planned build, and
the R.M.H. quickly became a new, happy addition to the family, and was given 'Pride of Place'. The second version can happen only it is rare, the R.M.H. becomes the new
heart of the house, (Which is what Hearth originally meant.) and the dwelling and its daily chores meld together with those of the R.M.H., with the happy homeowner quickly
becoming adept at anticipating The needs of his house Dragon !

The other outcome, caused by the Owner - Builder not understanding the needs of the R.M.H., or the 'Headspace' of the owner, results in the R.M.H. being placed away from
all traffic areas, Out of sight, out of mind, but mostly out of hearing range, the R.M.H. is not Given 'Pride of Place' or routinely tended to, the fire becomes out more often than
it is lit, Tending this unit becomes a Hated Chore, and we rarely hear the full-bodied deep croon of a contented 'House Dragon !

In the best of circumstances, it would be better that A R.M.H. was never built, than to have your friend turned off to the possibilities of a happy life with a dragon, unless you
are willing as Mr Jones good friend to introduce him to a Happy home owner who has a R.M.H. located in the heart of the house, and can not think of living without his R.M.H.,
I think you should do your friend a favor and change the subject whenever Rockets or wood heat becomes a topic of conversation ! For the GOOD of the Craft!

Think like fire, Flow like gas, Don't be the Marshmallow !As always, your comments / questions are solicited and are Welcome ! PYRO - Logically BIG AL!

Sandy Mathieu
Posts: 50
1
posted 6 years ago
Have you considered a "Castle Build". It has a small footprint and low surface temperatures so it can be installed close to a wall. 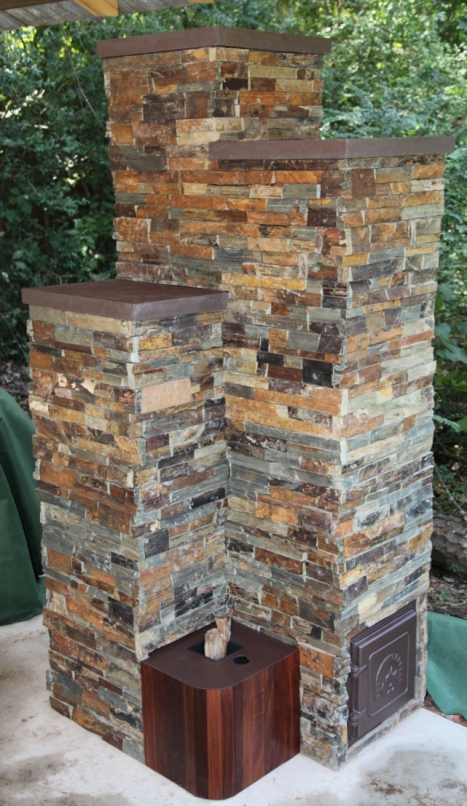 Posts: 3174
Location: Southern alps, on the French side of the french /italian border 5000ft elevation
145
posted 6 years ago
Mr jones is a posh person? Wanting to keep apearances, when being cleverer than others is the ultimate apearance for me! May be he doesn't deserve a RMH.

And aren't times tough anyways now? Ok, us economy is getting better, but how long another idiot banker does something stupid?

Well, now i'll stay on the technical side. Since i've thought thar one over before.

The first thing is to determin a spot in the living room, or area where jonsey and familly spend most of their time.

Then "embed" a J tube and mass into the floor.

I mean make the J tube insulated and all with the top of the feed tube recessed about one inch, below the floor, with a lip/rebate so you can fit a paver or cast iron grid on top. Make the heat riser go out of the floor, obviously. I'd say, he should do something like Sandy's bells. I am on the path of having a tall square metal box, which will be covered with bricks or pavers myself. But the same idea, replace the old barrel. Locate that against a wall, so it's not too noticeable. May be make that a part of a bar counter. That's posh!

Then pipe that to the mass into the floor/ground. The mass should be insulated below and on the perimeter. I was calculating lately, for myself, that something like 4 inches of Dow's floormate should do the trick.. And keep the heat within the mass to be radiated in the room and not in the ground. The junction between the floor edges to the mass is complicated to be insulated, so it's better to butt the edges. I'd use concrete for the mass, can be poured, and then the top can be surfaced and waxed. That's a posh finish nowadays in europe, waxed concrete. With a nice wooden floor butting against it. Should be good.

posted 6 years ago
Jacob Nielson : Do to a newly posted Thread, I could easily put myself in the position of talking out of both sides of my mouth! (I tried in one time and sprained my tongue )

Xisca Nicolas has started a new Forum Thread 'Starting the rocket with underground Heating' With pictures, where she shows her new R.M.H. build. It is an in floor model,
in a dwelling that is part cliff face (Volcanic) cave and part rehabbed Ancient building site ! And the climate is mostly 'Mediterranean' her biggest needs for heat will be in
the early morning

As such, and due in part to her remoteness from everything, she is working hard to make every bit of space in her structure do Double and Triple duty ! I applaud the
inventiveness she and her local craftsmen are bringing to the Job ! This in no way changes my wish to see that every R.M.H. gets a good home and an owner that is proud
of its warm gentle heat, who goes out of his way to Tout its Great possibilities ! For the Craft ! Big AL