Landon Sunrich
pollinator
Posts: 1703
Location: Western Washington
22
posted 6 years ago
Has anyone seen a good example of a backyard pool being turned into an aquaponics pond? Could a technique of container gardening and recirculating aquaculture be used to engineer an urban or near urban environment? Would this be a sustainable and effective use of water?

Landon Sunrich
pollinator
Posts: 1703
Location: Western Washington
22
posted 6 years ago
This is not an example of what I was thinking of at all but is non the less an interesting look at one in Arizona. Very interesting design.

I was thinking about something with more container grown trees and shrubs. If you had the water from your huge pond recirculating into your Tree pots, could one roll out and maintain turf below over the cement that often surrounds a pool and set up a grade (perhaps by stacking turf?) so that this water slowly circulates back towards the pool? Anyone seen an example like that? Anyone else interested in such projects? I'll keep looking. I was just thinking something with above ground Trees shading a pool in a place like southern california might be pretty effective at producing food. In neighborhoods with a high density of pools this would have the potential to create a strange new type of habitat.

Also anyone else want to game out food production in a permie world? I really should get back to doing real work around here. More later. Swimming Pools

Edit: More detail of a design by gardenpool.org. Again nothing like what I was thinking (deepwater culture + fruit forest). But very well though out and an actual functioning system functioning for this individual and his family.

Landon Sunrich
pollinator
Posts: 1703
Location: Western Washington
22
posted 6 years ago
Murray Hallam on why swimming pools won't work as a fault in the ratio of pond to grow bed.

I may have answered my own question. But I still wonder if you were designing to create an ecosystem rather than a productive system would allow for this flex ability. Fish ponds with stuff growing around them seems to work rather well in a natural environment. Seeking opinions

Flick Johnston
Posts: 10
Location: Western Australia
posted 6 years ago
Hi there, I too am looking at doing something along these lines.

In geoff lawtons Urban Permaculture DVD there is an example of using a pool as an aquaponics set up and they have the water circulating through only 3 bathtubs as grow beds and silver perch. It's possible.

I think if you are following aquaponics systems to the letter, then yeah you should probably have a one to one ratio like he says in that video you posted. But the problem is the solution, which means I can do a permaculture twist on aquaponics if I want to.

I'm looking at maybe having grow beds down 2 sides of the pool, of whatever containers I can find. I'm thinking if I add in an additional biological filter, like one of the home DIY ones you can build into boxes or blue barrels, then that should pick up any extra waste and put it into the nitrogen cycle if there isn't enough volume in the beds. Plus recirculating through a waterfall feature for aeration and only stocking with minimal fish, as there is only me and my partner. I'm hoping to keep the water clean enough for swimming in summer as well.

I suppose the difference is that in most aquaponics setups they want to get as much kilo per L of fish as they possibly can which requires having enough plants to soak all that nutrient up. I'm not interested in pushing the system that hard. My aim is to try to get what is an eyesore currently usable again.

And if it really comes down to it, do water changes regularly and siphon the nutrient rich water over the rest of your veggie patch

I really want to do this. Don't give up! Cause I haven't yet

Jeremiah Robinson
Posts: 92
Location: Madison, WI
2
posted 6 years ago
One way of incorporating it into your permaculture system is to use your pool as water storage for watering your soil-grown plants.

You can have enough grow beds for converting to ammnia to nitrates without removing all the nitrates.

To remove the nitrates you just pump the water into a hose or drip system and water your garden with it.

Refill the pool using filtered roof runoff or something like that.

shauna carr
pollinator
Posts: 104
Location: Sonoran Desert, USA
22
posted 6 years ago
I'm currently about to try this myself, although not with the trees and shrubs (in a desert and the heat makes these problematical). I will share how it goes, although I imagine I won't have much to say for a year or more. The pool is dry right now and I've been putting in the structures that will be under the water. I've got cement blocks for some of these, which I'm considering not sealing. I have read that they can acidify the water, but as the water here is highly alkaline, I'm thinking this may be a good thing rather than a bad one.

I've got about a 22,000 gallon pool and I'm going to be fiddling a lot, I imagine, until I can find the right balance for plants and fish. I'm really trying right now to look at completely submerged plants for the deep end of the pool, to keep it more oxygenated, if possible. I found one - freshwater eel grass - which is also edible, but I'm still looking for more.

Any suggestions for submerged plants that can go 6-9 feet deep would be appreciated! ^_^ Especially if they are edible or medicinal. 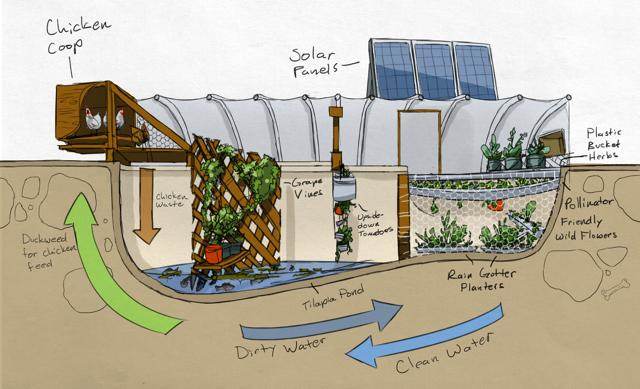 shauna carr
pollinator
Posts: 104
Location: Sonoran Desert, USA
22
posted 6 years ago
I have, yes! I even checked out their ebook on how they did it and all. It's great what they've accomplished - I hope someday I'm able to stay be sustainable!

I'm actually in a very similar environment, too, but in an area that's about 10 degrees cooler and with maybe 5 inches of rain more a year.

I've really considered doing something like this, because so much of it appeals, but in the end decided not to. I think it might be something I'll look into in the future, but there's just enough differences to make parts of it less appealing. Two of the biggest differences are...

- the wind in our area - I'm in an area where the vegetation has been so stripped down (nearby cattle) that the wind has no barriers at all before it hits the house. It has snapped tree limbs that were 5 inches across before. The local farmers I've talked to who live near me have a horrible time trying to keep their green houses from blowing over or the supports snapping during one of the big winds. I'm trying to grow some wind breaks, but obviously that's going to be a bit before they're effective. This has been not just a problem for any green house structures for me, but also any solar paneling, as well. I'm sure I'll figure it out, but it's tricky so far.

- the wildlife - I live on the edge of the desert rather than in a city, so we get hawks, coyotes, a herd of javalinas (wild peccaries), and a bobcat that come into my yard regularly. If I keep chickens or any other animal, I'm going to need a much more secure housing for them. I'm sure that's doable, but the cost and labor are going to take a while, so I have not even considered keeping any animals outside yet. I don't think I'd even be able to keep fish if I wasn't looking at a deep pond like this pool, where they could get low enough to escape predation. And the animals will all be drawn to the water - my pool has been a water source for years, now. Which has actually greatly benefited the yard, as the birds keep the insect population down on my plants, and they all add nutrients to the soil when they come, visit, and poop in the yard. They have also given me a huge number of plant volunteers, most of them local edible plants. ^_^

And if I was honest, I like the physical look of a pond with rocks and all. I have a chronic illness so I am rarely able to leave my home and yard. Having something just for beauty, but that has a vitality and life so that it always shows me something new, is something of great value to me, you know?
Jeremiah Robinson
Posts: 92
Location: Madison, WI
2
posted 6 years ago
Hi Shauna,

I know exactly what you mean by wanting to be surrounded by beauty, especially when you're bound to your yard. Having a yard full of garden beds and growing plants makes my want to wake up in the morning.

I'm sad to hear that you can't go further on your dream because of wind and wildlife. I have to believe that some of the folks who grow on the east coast would have solutions to wind and greenhouses. They do get hurricanes.

Something more solid than the Garden Pool's hoop house, like acrylic, would probably hold up in the wind and keep out wildlife.

Here is a link I found:

shauna carr
pollinator
Posts: 104
Location: Sonoran Desert, USA
22
posted 6 years ago
Oooh, thanks for the link, Jeremiah! And I had not even though of hurricane proof green-houses, big duh to me. More research to do already, LOL.