Myron Weber
Posts: 71
Location: Orange County, CA, USA
2
posted 6 years ago
I may have more land in the future, but I am really enjoying the challenge of working with my 5400 sq ft lot. Working within constraints forces creativity and innovation. And I'm sure that what I'm learning here will make me better at using a larger space if I have it. What have you learned from doing permaculture within urban space constraints? I'll start:

Today I planted 4 bare-root southern highbush blueberries after planning for a long time. I planted 2 pairs of bushes to actually fit 4 varieties in a space that would normally fit 2. Each pair has a shorter variety on the south (both sunshine blue) and taller on the north (1 sharp blue and 1 jewel). I'll prune each pair to basically grow as 1 bush. The mixed varieties will help with pollination and provide early, mid, and late production. There is about 8 feet between the pairs. I'm putting an autumn olive between them - offset a bit so it doesn't crowd - for nitrogen fixing and an alternative hopefully to draw birds away from the blueberries. In the spaces around/between, I'll layer perennial herbs, support plants, and annual vegetables.

My space limitations forced me to plan more carefully how to stack in horizontal space, vertical space, function, and time. Man, this is fun!
G Freden
pollinator
Posts: 562
Location: West Yorkshire, UK
152
posted 6 years ago
-Last year I put diy trellises up every fence and wall and grew stuff up them: beans, nasturtiums, peas, etc.
-I also have started planting my (small) trees on the east and west borders of the property, to make sure they don't cast shade on my garden (sunshine is at a premium in this rainy, rainy land).
-For big beds, instead of paths through them taking up valuable growing space, I just have a few strategically laid stepping stones.
-I put up the chicken coop at the back under the shade of a mature tree, rather than a sunny space--since not much grows there anyway, might as well grow some eggs

-I'm also in the process of reshaping some of the beds into a keyhole shape.

You're right, it's a fun challenge to have such a limited palette to work with; mine is only 10mx10m at the back, and an almost negligible 2mx2m north-facing front. Even then, sometimes the possibilities seem overwhelming!

posted 6 years ago
Chicken coop went in the shadiest part of the yard in my space too! I've planted stuff denser than the recommended spacing, but then I'm on hand to manage things really intensively and (so far) all is well.

My neighbour wouldn't let me put trellis up against "her" fence, so i built ground-standing trellis a few inches infront of the fence to grow things up- on my land and she can't do anythign about them!

I've also used root-barriers (digging a big hole and putting builders plastic in as a barrier) to enable me to fit crops in close to large bushes on the neighbours side of the fence (in this case a privet hedge on the neighbours side- nothing was growing near it on my side because the hedge is so vigourous, and it was taking a large chunk of my garden out of production)
G Freden
pollinator
Posts: 562
Location: West Yorkshire, UK
152
posted 6 years ago

My neighbour wouldn't let me put trellis up against "her" fence

Erm, yes...I didn't exactly consult mine about his fence; it's a 2m privacy fence and I put two hooks on top, to hold a bamboo cane with long strings hanging down to the ground, for runner beans; and two more hooks for a string-and-stick ladder type thing, for nasturtiums. I was trying to find photos, but the best I can come up with is this: 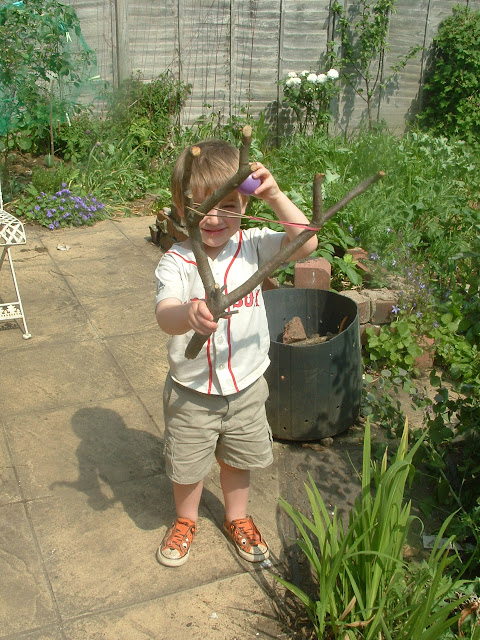 You can see the red strings hanging down against the fence at the back. 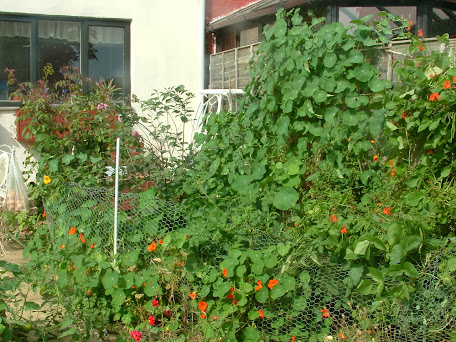 From a slightly different angle later in the year, but the same fence: nasturtiums completely dominating the ladder, and the tip of the bamboo cane dripping with runner beans at the top right. The temporary chicken wire to keep chickens out also supported opportunistic nasturtiums and runner beans.

Stevie Sun
Posts: 58
Location: Devon, UK
1
posted 6 years ago
I'm aware my garden is bigger than many, but its still less than 5m x 10m and I have chickens, two veg beds and a raspberry bed. I'm only just started really, as we've been here less than 3 years.

I've learn that poly culture beds are awesome. I could probably produce more with a more traditional approach but it would involve a lot more work. The larger of my veg beds gets planted in one go but is still giving food from last years planting of chard. The only weeding is removing the odd bit of wheat where a grain of chicken feed has landed in the wrong place, which is just picking fresh chicken food really, and then removing stuff which is ready to leave the bed.

I'm due two lots of surgery before the end of the year, one of which will affect my mobility for quite a long time after (possibly up to a year). BUT I know that with my poly bed I will have food in my garden and it won't be lost due to limited mobility. If mobility was a major long term problem I would just build the bed higher so it was easier to reach.

I've also learnt that just because I have a small garden it doesn't mean I can't access stuff. I want to get my surgery stuff behind me and then I'm going to get my me on the list for an allotment. Where I will have keyhole beds and poly culture planting.
Hal Craston
Posts: 9
posted 6 years ago
fantastic! love the pic! I'm currently trying to figure out how to create some extra space for "urban gardening" on my fire escape. not sure what they rules/regulations are on that. i'm sure it varies with location, but anyone have any input?
Charles Tarnard
Posts: 337
Location: PDX Zone 8b 1/6th acre
13
posted 6 years ago
Trees. You can't just chuck a tree anywhere you want and hope it sticks. I have to be very careful to make sure drip lines won't cross and foundations won't get cracked. I also don't have an abundance of off season light on my property so I need to be certain they will release the light in winter.

I have two trees to plant now and that will leave me with one good spot left unless I remove a shrub or chop down my spruce (which I would totally do if there weren't hundreds of birds living in it for a few months a year). When my trees mature even a little it will be amazing to be out there with them.