Jen Shrock
pollinator
Posts: 363
Location: NW Pennsylvania Zone 5B bordering on Zone 6
8
posted 6 years ago
Zach - I have been thinking a bit about your earth powered greenhouse thread and your comments about my property possibilities.

The original greenhouse is actually in a location with a very high water table (5' below grade) and it has provided an immense benefit to the greenhouse. The ground water provides a temperature and humidity buffer. If the water table is even higher than this (as it sounds yours might be) then you can take a two pronged approach. First berm the greenhouse above grade as much as possible. If I were in your situation I would put in a pond and use the excavation to create a big berm around the greenhouse. As long as the berm angle is 1:2 or shallower then you should get the same heat benefits. The other thing to do would be to add a french drain (or several) to reduce the tension on the foundation. This would drain the water around the foundation into the pond.


My lot is an urban lot that is pretty flat. I used Google Sketchup to do the 1 foot elevation intervals, but not sure how accurate it is because I get different results depending upon how zoomed in I am. Regardless, there is a slight elevation drop from the street above me, in my yard, maybe 2-3 foot over 125 foot or so. Where the water tends to really pool is just beyond the greenhouse (on the south side) and I have thought about possibly putting a small pond there.

So my question really is...have you ever tried to combine the Krater Garden and the greenhouse shown in that thread. I live in zone 5B, so I definitely still get winter and here is what I was thinking.
* What if I dug down for a pond and built up the edges like a Krater garden, using the north edge of the Krater as part of the earthberm for the greenhouse? I am thinking you could gain the thermal insulation from the earthberm and the solar gain from the reflection off of the Krater pond.
* Then, to take the idea further, what if I installed a small pond or "stream" that had a walkway over it in the greenhouse that was fed by a Holzer monk system from the Krater pond outside? You could put the monk down in the spring and fall when it is wet to even the level between the pond in the greenhouse and the pond in the Krater. If you hit a dry spell in the summer and wanted the water for the greenhouse, you could turn the monk up so as to not let the water drain out of the greenhouse and into the outside Krater pond.
* With the Krater facing south, have an overflow for the pond, which I would also think would be an area that the cold air could flow out on the western side of the Krater (my yard has a little natural fall on that side). Possibly plant some tall grasses on or around the over flow to help make sure that it doesn't wash away if a very heavy rain comes and also as a little bit of a wind break for that opening in the Krater.
* Try to shape the Krater to be like a heat trap with parabolic shape, opening on SW side.
* Additionally, what if I were to get some large rocks to put in the Krater bottom somewhere in the edge of the pond to help with heat gain.
* Being in an urban enviroment, I am not sure what fit the local township (and neighbors) would have if I put in an actual pond. Utilizing the starting ideas above, what if you were to fill the Krater "pond" with small stone and then put a layer of landscape fabric over that with some soil over that (I think Paul came up with an idea like this) so that the "pond" is hidden. I think you could still do the monk and put a drain pipe in the overflow that I mention and it would be safer for any children that might wander through my yard. Possibly could still put a big old rock or pile of large rocks in the center of the "pond" for more thermal gain.
* Here is a rudimentary sketch to try to explain what I am thinking.

So, am I even going down a path that makes sense or would work? Shoot holes in it, suggest improvements, any thoughts would be appreciated.

"Turn your face to the sun and the shadows fall behind you." ~Maori Proverb

Zach Weiss
pollinator
Posts: 304
Location: Montana
93
posted 6 years ago
Awesome! I like it, your definitely onto something with building the greenhouse into the northern edge of the berm.

I never use google earth data with contour intervals higher than 2', the accuracy is too low to be very functional. As far as accuracy of the data I think it's more like with 5' or 10', maybe even more. They are in the process of upgrading the resolution of your data but so far I haven't been able to tell a difference.

As for combining a Krater Garden and greenhouse the one in the thread you mentioned is actually at the north-eastern section of the berm. This leans itself very nicely to a big berm to the north of the greenhouse and is a nice way to flow it all together. I will say that so far the greenhouse has outperformed my expectations compared to if it was a stand alone structure not enclosed in the Krater Garden. The glazing is always going to be your main heat loss, I'm finding that if you can keep wind off of it this makes a bigger difference than I would have thought. 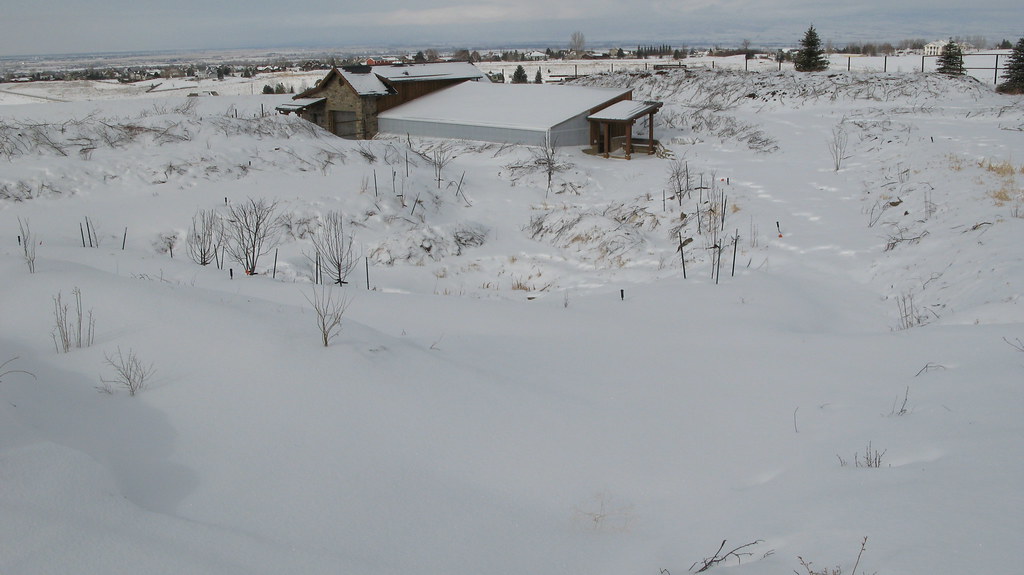 Connecting the pond in the Krater Garden to a Pond in the greenhouse is an interesting idea, and I'm sure it would provide some unique aquaculture opportunities. I know a fly fishing store that has an indoor/outdoor fish pond that this concept makes me think of. The only problem that I see with connecting the Krater Pond to a greenhouse pond is that the elevation of the greenhouse is going to be too high. You'd want the bottom of the greenhouse sitting above the pond, so that it is out of the saturated zone in the soil. Here's kind of what I'm thinking: 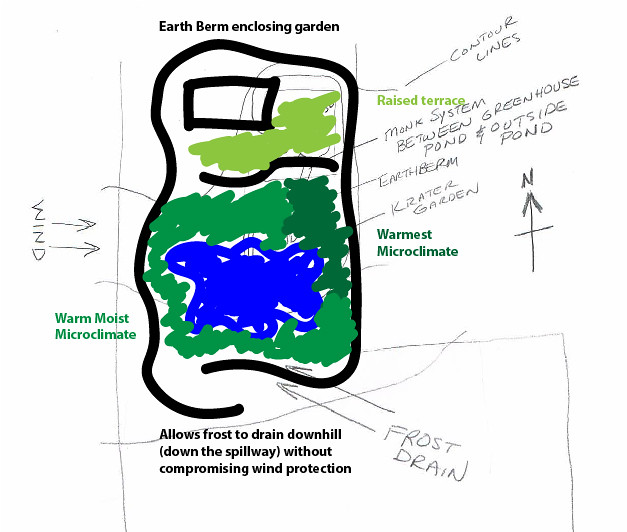 This is still missing lots of design parameters such as access, where the house is located, goals, etc etc...

Grasses and Bamboo are both great for spillways, short tough roots that provide stability but don't compromise the dam. It is also best whenever possible to run the spillway over undisturbed ground. Nature does a much better job of settling the soil than we can, a naturally settled area makes the most stable spillway.

In areas with plenty of moisture, which I'm guessing is your case with the high water table, they are often happy to have people construct detention basins to manage storm water. This is often a bennefit to your neighbors, county roads, developments, etc. It's all about using language they understand and having a professional approach when it comes to working with the authorities.

Jen Shrock
pollinator
Posts: 363
Location: NW Pennsylvania Zone 5B bordering on Zone 6
8
posted 6 years ago
Thanks for the feedback. I definitely agree with getting the greenhouse up and out of the soggy zone. It would probably need raised a little more than I was originally thiking. In building the small pond (keep in mind that area of the lot is only 50 foot wide), I was hoping to have enough soil for the earthberms, plateaus. Might have to be one heck of a deep pond!

I didn't really think about the eartberms enclosing the entire garden. I can see where it makes sense from a wind standpoint. Sort of along the line of a hugelkulture concept. I started to plant vegitation along the west side of the property to serve as edible windbreaks. I actually had one neighbor thinking they pissed me off because I was planting along that edge, until I pointed out the edible nature of the plants and assured him that those edibles were the "sacrificial lambs" for his kids once they started producing. That seemed to appease him.

I am ALL ABOUT CREATING MICROCLIMATES. I really like to experiment with what I grow and want to see just how far I can push my zone limits. The greenhouse would be to grow things not normally grown even close to my area, along with propagation of plants (working on adding a lot of plants to my lot that I want to eventually propagate) and also as a winter retreat for me to forget about these darn subzero temperatures for a short while. The Krater garden microclimate areas would, again, be to push some zone limits and maybe even give me an opportunity to play around with seeing if I could extend the harvest date of some things in my yard by planting the same thing in several areas of my yard. I was actually thinking that doing the earthworks might add some elevation to parts of my yard and enable me to control the frost drain a little, too.

Basically my yard will be one big science lab and the ultimate goal is to just see how far I can push things. For example, I have stocked up on seeds for nitrogen fixing plants/shrubs/trees to plant right along side several fruit and nut trees this year to see if I can get them to grow faster and healthier. I am ever curious and can see me outgrowing this lot in a couple of years. This lot will be a learning experience and plant nursery for me until I can get my hands on something larger. It will also give me a chance to teach people about things because my neighbors cannot seem to contain their curiosity and the one neighbor boy, in particular, is really into science. It could be a tool to fuel that love he has even more and channel some of his mischeviousness into something productive and helpful.

"Turn your face to the sun and the shadows fall behind you." ~Maori Proverb

Zach Weiss
pollinator
Posts: 304
Location: Montana
93
posted 6 years ago
I really love the direction your headed with this project. As Sepp often says "do something, then something will happen." This gets right at the root of the action and observation of Holzer Permaculture. Experimenting and then observing the feedback from nature. This is one of the reasons I think Sepp is so willing to come to the USA, because we are a gung hoe society that is ready to do something and learn from the mistakes. From what I understand many Europeans are more thoughtful, and take a long time to plan their actions, where as Americans are more willing to dive right in. It's always important to experiment on a small scale until the desired results are achieved, and then carry it over to the rest of the landscape.

An insulated north wall would certainly be a good solution for the greenhouse. Also be ware that this is where the passive ventilation will be, so wind need to be accounted for. If there were a strong wind from the north (which it sounds like there is not) then you would have to take special precautions so that the ventilation system would work properly.