The problem is the solution (or; how I started with small projects that snowballed into much more)

Charles Tarnard
Posts: 337
Location: PDX Zone 8b 1/6th acre
13
posted 7 years ago
I don't necessarily think I"m reinventing any wheel here, but this winter every project I've had seems to feed other projects in some way and I thought it was interesting enough to document for my internet stranger friends.

After building my hugelbed with a small frame to keep my neighbors from melting down this is what my front yard looked like. 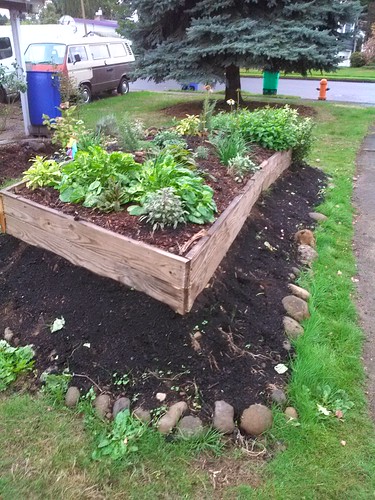 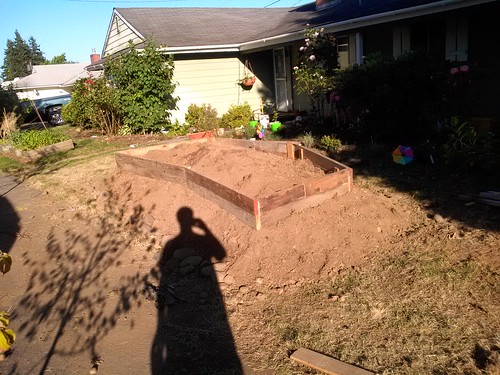 The spruce tree in the background of the fall picture was covering some huckleberries and I thought they could use a little more light, so I trimmed up the tree a bunch to get some light down below.

Those raised beds in the distance didn't grow very well and they were lined with weedblock (I hate that stuff so much now), so I pulled up the frames and started to form up some new beds. Fortunately I had some wood laying around that could get put in the base there, then some branches to cover the soil and prevent erosion during the winter. I also had enough wood left over to build a trellis for some grape vines that I planted. It looks a little hokey, and may need to be rebuilt in another few years, but it will give the grapes something to start up now. 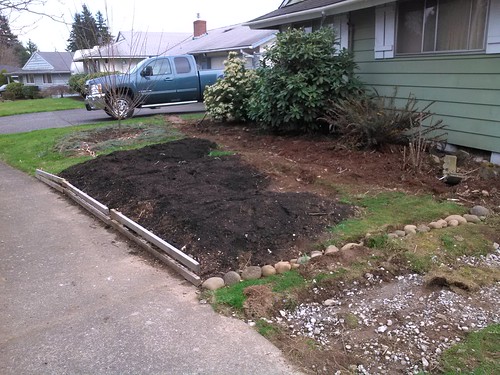 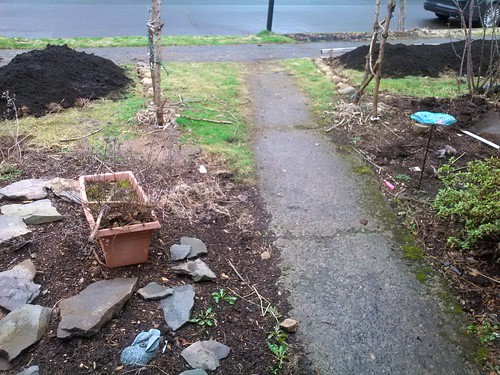 I built this nice, inviting archway and put it around this hideous walk. I haven't liked this walk for years and I started to frame out another, more inviting walk with the stones I dug out of the ground during last summers backyard leveling/ hugel build project. But what to do with all that concrete?

I had also grown tired of watching my driveway host a mini flood every time it rained for more than 5 minutes. I decided to do something about it. It was time to dig out the drain in hopes of preventing future flooding and maybe prolonging the wet season in my yard just a bit.

One of my other goals this year was to convert most of my grass into food plantings. Well after digging out the drain that became almost a necessity, as you can see by the two raised mounds next to the hugel. These mounds were great in that they were also able to give my yard some structure, rather than just having this lonely mountain in the middle of the yard. 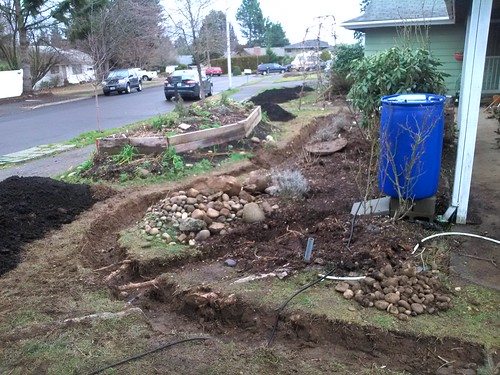 But what to do with that ditch? And that concrete? 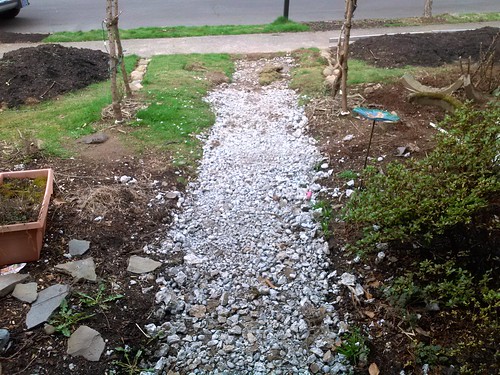 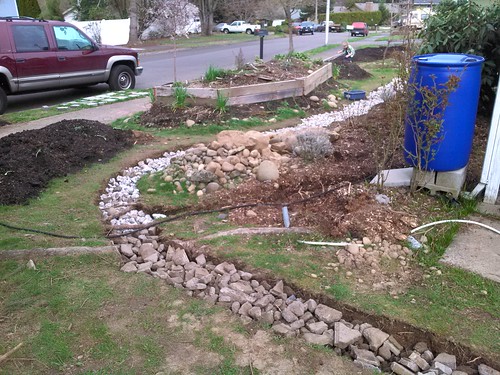 I'm not done yet, there is still some more to dig and fill on the other side of the yard, and getting that walk replaced with some flagstones. Plus I have to actually get stuff to grow

. But in one year I have completely renovated my front and back yard for the cost of a couple loads of compost, a one day bobcat rental, seeds, and transplants. It's been a good year.

Ask me how much I hate weedblock. 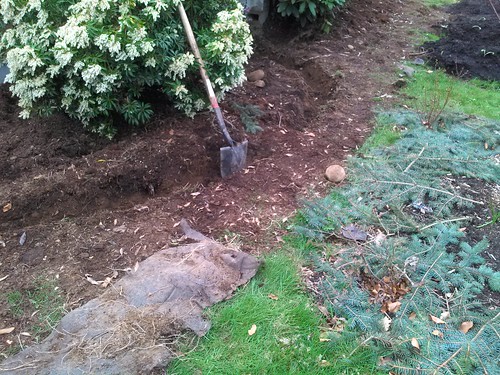 Jennifer Wadsworth
Posts: 2679
Location: Phoenix, AZ (9b)
194
posted 7 years ago
Awesome! It is funny how one thing leads to another, isn't it?? Are you "that crazy garden guy" on your block?

Charles Tarnard
Posts: 337
Location: PDX Zone 8b 1/6th acre
13
posted 7 years ago
I am not the crazy garden guy...yet. Until the last year or two the extent of my involvement in the yard was to mow when the yellow flowers got out of hand. It's my wife's fault really. She got me to build a couple of planter boxes and signed us up for a friends of trees neighborhood planting. Once I had started nibbling snap peas off the vine and pears from our shiny new tree I was hooked. Now I'm just trying to get everything in order before my kids spring soccer starts. Water and weed are things I can do while coaching soccer. Build systems is not.

My neighbors are noticing, so the eccentric hippy tag is probably on the way.

I swear the effing weedblock is doing naughty things under the ground and procreating. I was certain I pulled all of it from my yard, but there it was, mocking me. It just makes everything harder. Water doesn't seep, dirt is harder to dig, plant bases get choked. It's just no fun to work with.
Renate Howard
pollinator
Posts: 755
Location: zone 6b
16
posted 7 years ago
I hate it too. Nothing worse than landscape plants with roots growing all through the darn stuff.
Michael Cox
pollinator
Posts: 2981
Location: Kent, UK - Zone 8
400
I like...

posted 7 years ago
Evil stuff... The previous people one our vegetable plot had laid it down between the rows of raspberry canes. All that it did we provide an ideal hiding place for giant mutant bindweed roots to hang out. I ripped the whole lot out this year and the root mat beneath was like a snake scene from a horror movie. I think I pulled out close to a cubic meter of bindweed roots from that one area - no wonder our weeding efforts had proved futile!

Michael Cox wrote:Evil stuff... The previous people one our vegetable plot had laid it down between the rows of raspberry canes. All that it did we provide an ideal hiding place for giant mutant bindweed roots to hang out. I ripped the whole lot out this year and the root mat beneath was like a snake scene from a horror movie. I think I pulled out close to a cubic meter of bindweed roots from that one area - no wonder our weeding efforts had proved futile!

My experience is that it gives burrowers a lovely shelter to run between all your roots. It's like a little roof for their burrows. I don't have a big rodent problem (thank you next door neighbor cats!) but before those cats moved in we did and every time I pulled it up there were a number of little burrows running right under the mat.

I don't know who manufactures the weedblock, but if they're in any way related to herbicide and fertilizer producers (as I suspect), it's a pretty impressive racket.

Charles Tarnard
Posts: 337
Location: PDX Zone 8b 1/6th acre
13
posted 7 years ago
The wife tracked down an arborist. Which means my work can get completed (yes!!!), but the couple week lull I thought I was getting is gone (meh). 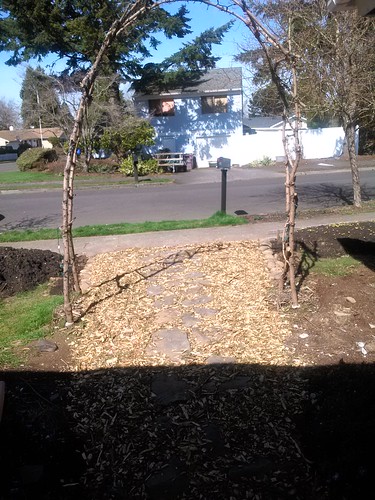 Charles Tarnard
Posts: 337
Location: PDX Zone 8b 1/6th acre
13
posted 7 years ago
I wanted to brag on how much work I got done in a short time. Even though I haven't kept it as clean as I wanted (curse you soccer season!), there is a ton of growth where there was once grass and a few shrubs.

Here's a pic from a few years ago, before I had grown any of my own food. Apart from street trees, this is what my yard looked like last year at this time. 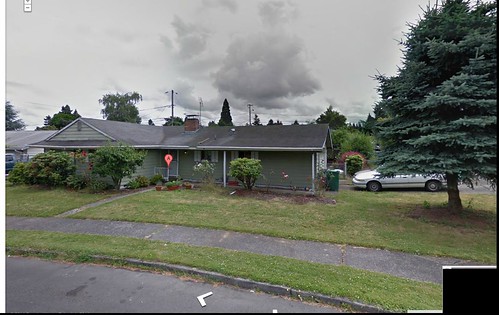 And a few days ago. 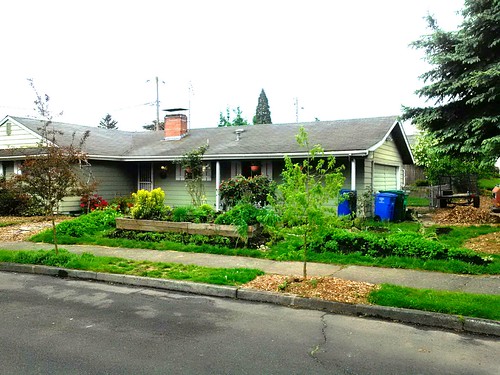 Certainly, mistakes were made in the 'spring planting execution' department

. I did some cover cropping when I should have done some static mulching, I got way too many annuals, among other things, but I'm not too worried about any of that, because I have a much better plan going into fall and next spring and if you like explosions of green things, I have that. 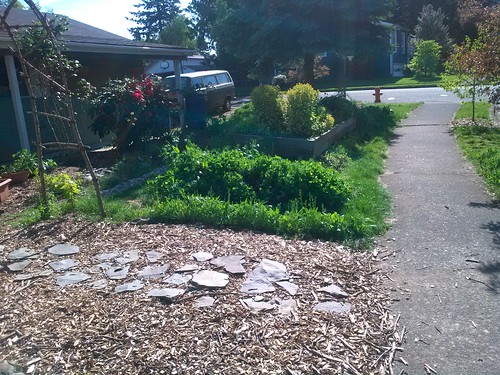 Reasons to be excited:

This tree has never born fruit, and the whole thing looks a little like this: 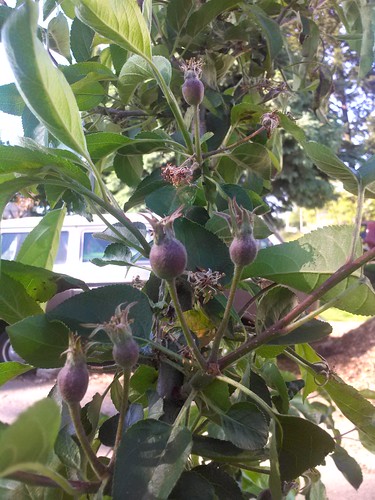 And also too, strawberries: 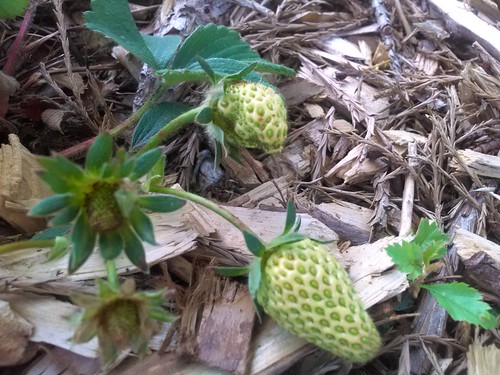 posted 7 years ago
That looks much better, Nice job!

posted 7 years ago
The before and after pictures really show the difference, it looks awesome! Well done.
Tristan Vitali
pollinator
Posts: 356
Location: south-central ME, USA - zone 5a/4b
90
I like...

posted 7 years ago
Transformation! I love it!

Did a thing today. I've never thought of spirals as the most effective way to make things grow, but they look nice and I have a bunch of huge rocks that are in the way elsewhere so...