How to tell if a chicken is a hen or a rooster ?

Mia Gammon
Posts: 2
posted 6 years ago
Hey guys! I trying figure out the sex of my chickens there about 3 months old any tips? Thanks you
image.jpg
Burra Maluca
Mother Tree

posted 6 years ago
Are they all the same age?

Are they all from the same parents?

I notice some of them are barred. Do you know what colour the parents were? In particular, was it the mom or the dad that was barred?

Are some of them growing combs earlier than the others?

Mia Gammon
Posts: 2
posted 6 years ago
the chicken on the left the gold one is an adult hen she sat on the eggs.
All the other chooks are the 3 month old, they are from different parents, there are 2 wyandottes 1 bantam and i am not sure what the other three are.

What does barred mean?

Two of them are taller than the rest and have small combs and often fight each other, is it possible that they are roosters?

Thanks for your help! i'm new to chickens so i am still learning
Craig Dobbson
steward

posted 6 years ago
I can usually tell by the shape of the feather tips on the neck. In other words- If the feathers on the neck have pointed tips like a "V" it's likely a male. Females neck feathers are usually rounded at the tip. At least that's the way it's been for me. Males also develop combs and wattles faster than females.

posted 6 years ago
The tall leggy ones with more comb are very likely male, as Craig says. The only thing is that if they are from different parents then they might have different rates of development, but in general the leggy ones that fight and develop comb first are the boys.

This is a barred chicken - it refers to the bars of white and black pigment on the feathers. 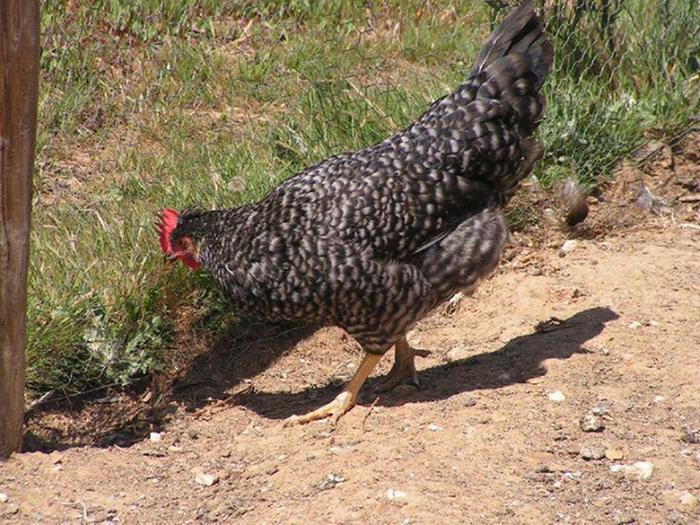 It's a sex-linked trait. If the mother was barred but the father was black/solid colured, then the males will inherit the bars from their mum. But again, with mixed parents it's not always easy to figure it out.

theres a technique where you can squeeze its anus or something similar and something will pop out, have a search, i did once, i think i sent it all back to the subconcious although its not that difficult apparently and people on chick production lines take about a second to do it

its probably a bit early for you with these being your first but watch them for a while, look at the body language, are they fronting up? ill post up a cockrel fight i filmed yesterday as my 3 month old chicks start to exhibit male dominant behavior, also the hens will peck at each other but wont usually rear up and start facing off, the hens can also look more femine, where the cockerels head can be more bulletlike or streamline, sounds weird but i can usually tell a chick at about 2 days which will be male and which will be female just by looking, this technique isnt perfect

will you be getting an incubator? best purchase ever if you dont have a broody hen

posted 6 years ago
If the birds are 3 months old, the roosters should be crowing, although competition from other roosters may prevent this.

Here's a method I've found to be pretty accurate: hold the chicken with both hands firmly around their wings, with the head faced away ( you're looking at their butt). Very quickly rotate your hands forward so the chicken's head points down. If the tail feathers fan out, it's a hen ... if they stay together, it's a rooster. It has proven to be very reliable for me.

Realize your potential by simplifying your life.
"Learn how to see. Realize that everything connects to everything else."
~ Leonardo Da Vinci

Annette Winterton
Posts: 2
posted 4 years ago
I to am new to chickens. I have had 6 chicks from 1 week old (now about 7 weeks old). I'm not sure of the breed and whether they are roosters or hens. Please help.
Thanks in advance,
Annette

Annette Winterton wrote:I to am new to chickens. I have had 6 chicks from 1 week old (now about 7 weeks old). I'm not sure of the breed and whether they are roosters or hens. Please help.
Thanks in advance,
Annette

I hate to break it to you, but I believe that blue one there is actually a bunny

My guess would be that the black one in the middle of the second picture is a rooster based off the bigger, darker colored comb and his tail. I've noticed with my roosters that the feathers just before the tail starts (saddle feathers) seem to sweep to the side more dramatically and earlier than the hens. Hard to see in this picture but that what it looks like on that one. I would say the other two black ones are female, combs are still greyish and smaller and their tails are shorter.

Not sure on the reddish ones, I would need to see some profile pictures. I would guess hens because of the combs but it just might be too early for them.

Annette Winterton
Posts: 2
posted 4 years ago
Thanks so much... I think I get it now.

posted 4 years ago
Looks like both in the middle might be roosters. The black ones comb isn't as red as the white one but it is way bigger than the black one on the far right...
Tyler Ludens
pollinator
Posts: 11802
Location: Central Texas USA Latitude 30 Zone 8
1051
I like...

posted 4 years ago
Chances are if it's a really friendly, loveable, great chicken, it's bound to be a rooster so it'll tear your heart out to put it in the stew pot.

Tyler Ludens wrote:Chances are if it's a really friendly, loveable, great chicken, it's bound to be a rooster so it'll tear your heart out to put it in the stew pot.

We usually just wait until they start gang raping our hens and then we don't feel so bad...but yea, the roosters are usually more personable and friendly until the hormones kick in. There's been a few I didn't think I could eat until puberty hit and I wasn't so fond of them anymore.
Tyler Ludens
pollinator
Posts: 11802
Location: Central Texas USA Latitude 30 Zone 8
1051
I like...

posted 4 years ago
I have a couple going through the especially cute stage right now, that I won't be able to keep. But yeah, they generally turn nasty later on. Not always, though.

posted 4 years ago
True, we have one now that we spared on the last butchering because he was smaller than the rest. Turns out he's got something wrong with him and he's got a bit of a hunch back. Gets around fine and still harasses the hens but he is also incredibly protective. The other day another, younger rooster was harassing hens and Igor (the hunchback, clever, huh?) came out of left field and jump-kicked that other rooster off the hen. I'm kind of dreading butchering him but I couldn't keep him regardless because I don't want to propogate those genes :/
image.jpeg
alex Keenan
Posts: 493
15
posted 4 years ago
On our buckeye's one can look at saddle and hackle feathers.
Females have round ends on saddles, male have a point at end.
You see something similar on the hackles.

Nancy Bush
Posts: 25
Location: Cerro Negro de Nicoya, Costa Rica
posted 4 years ago
Yes, the 2 fighting each other are probably roosters......in the photo it looks like tho dark one in front and the dark one at the rear are roosters ( they have a knot on the head & the others don't)