Neil G Jay
Posts: 36
4
posted 7 years ago
Hi. I want to build a RMH but I'm in rented accommodation(south Wales, United Kingdom) but landlord wont allow me to build one. Sooo I thought what if I make a rocket stove and encase it in 3 x 25 litre metal drums stacked and welded together with the rocket chimney running up inside it with a cob type mix as the mass. Then I'll fire it up outside, get it upto temperature then bring it indide on a trolley and place it in a room in the centre of the house and see if it keeps the temps up overnight. I was considering winding 30m of copper tubing inside the mass with the ends coming out of the drums to which id put connectors to allow me to pre warm water going to the combi boiler which feeds the hot water.
just looking for some feedback as to what the veterans on this forum think are the Pro's & Cons might be. Thanks.
Bob Jackson
Posts: 52
1
posted 7 years ago
You're going to need a lot of mass or get it very hot, either of which will make it tricky to move.

Neil G Jay
Posts: 36
4
posted 7 years ago
Well if the 6" pipe going up the middle of it takes up roughly 30% of the volume that leaves around 50litres of mass, if I insulate the bottom drum I should be able to retain the heat for longer with the natural rise of heat from the bottom drum into the top 2. I'll wrap it in something to move it if it gets too hot. How long would you think it may last? I'm just trying it out ready for when I can create one in my own house.
Thanks. Neil

Posts: 3450
Location: Southern alps, on the French side of the french /italian border 5000ft elevation
177
posted 7 years ago
Neil, well, the best advice i can give you is, build one realy good looking one, and efficient outside first, let the landlord sniff the exhaust and sit on the bench for a while, explain that, it would increase the value of his flat, and then you will have won, i think. If it's an old house with thick walls, try to use one inside wall as mass. Which interferes less with the layout of the flat. An old doorway inside a stone wall, where some shelves have been retrofited, or a broom locker has ben made is the perfect spot for a 6 or 8 incher bell layout.

Neil G Jay
Posts: 36
4
posted 7 years ago
Well ive decided to have a go at making a portable rmh. Im hoping ive attached some photos 8f what ive done so far. Im going to fill it with thistle plaster/sand mix and infilled with some heavy/hard pebbles for additional mass. Im going to use an old shopping trolley to move it about and will try and post up some pics of what ive done so far.
20141031_124121.jpg 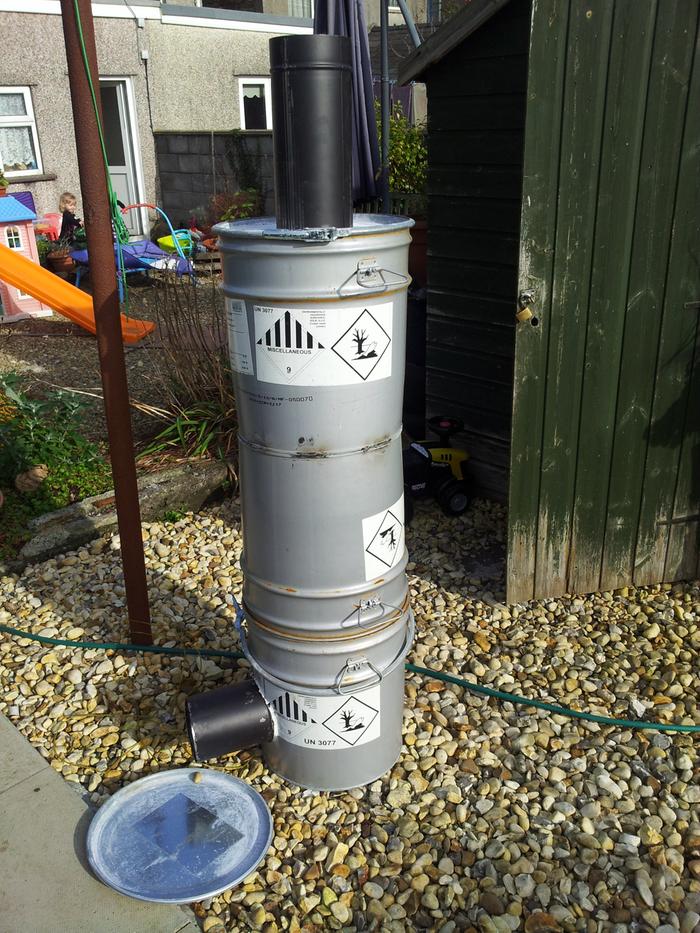 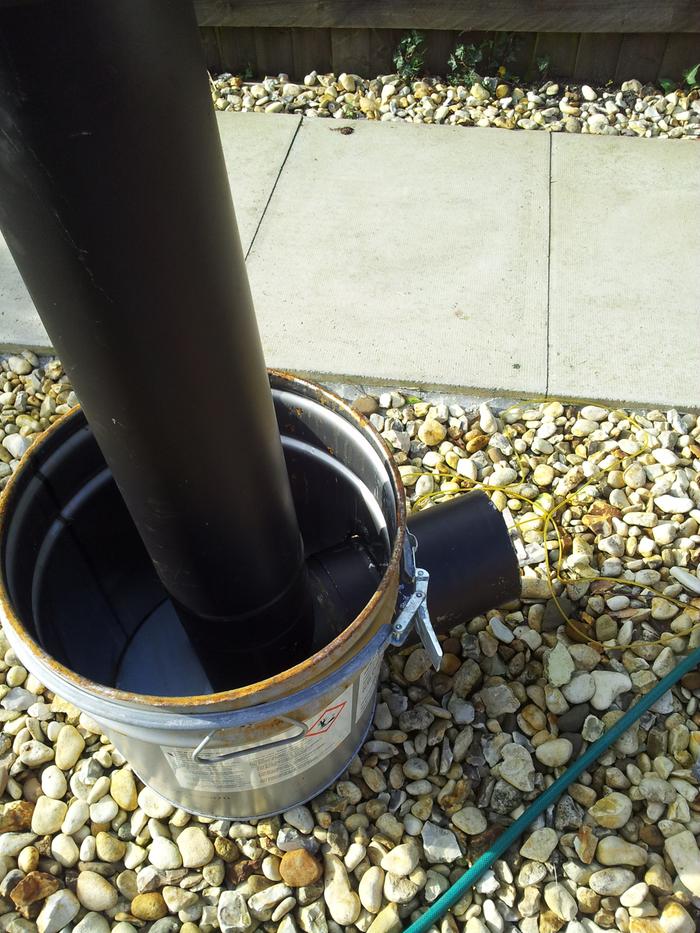 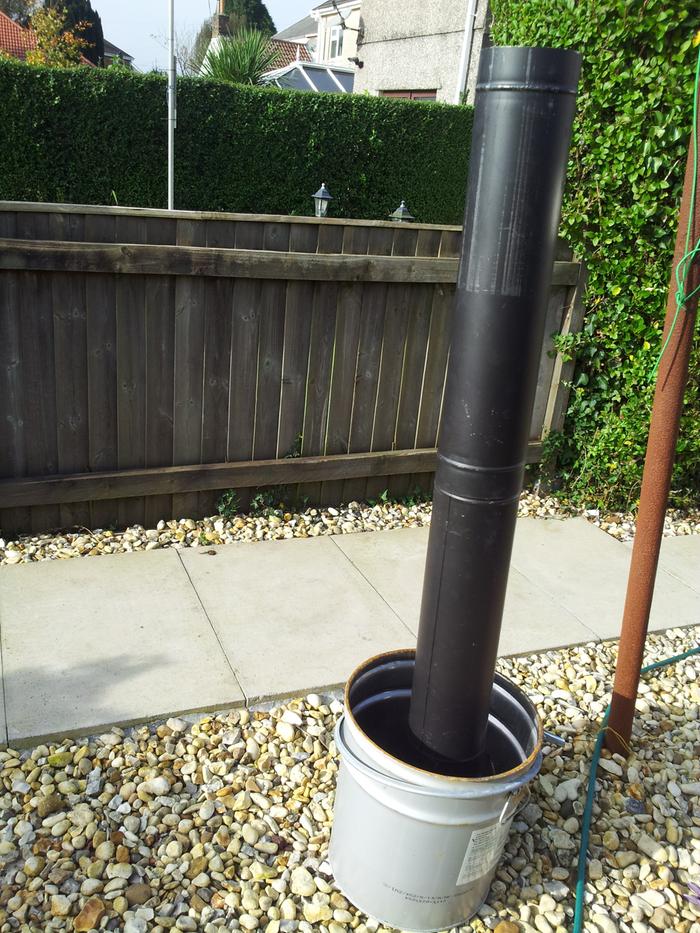 Posts: 3450
Location: Southern alps, on the French side of the french /italian border 5000ft elevation
177
posted 7 years ago
Not sure that will do much.

Metal innards, no insulation, robing heat from the heat riser, that's no rocket!

An intresting idea, but completely crap in the making: http://www.tamizsolutions.com/2012/09/10/the-rock-bucket-rocket/ http://donkey32.proboards.com/thread/1323/interesting-compact-concept

you make a proper rocket, insulated, if for heating, i would say either J tube or batch. I'm under the impression L tube is underpowered for the job. Then make a big bell around, filled by big pebbles or firebricks for example. A good trick to make the bell, instead of a barrel, is to use an old home heating fuel tank.

Here's a pic of the mass barrel/bell of Peter van den Berg 8 inch batch box at thge inovator gathering. If that can give you an idea. 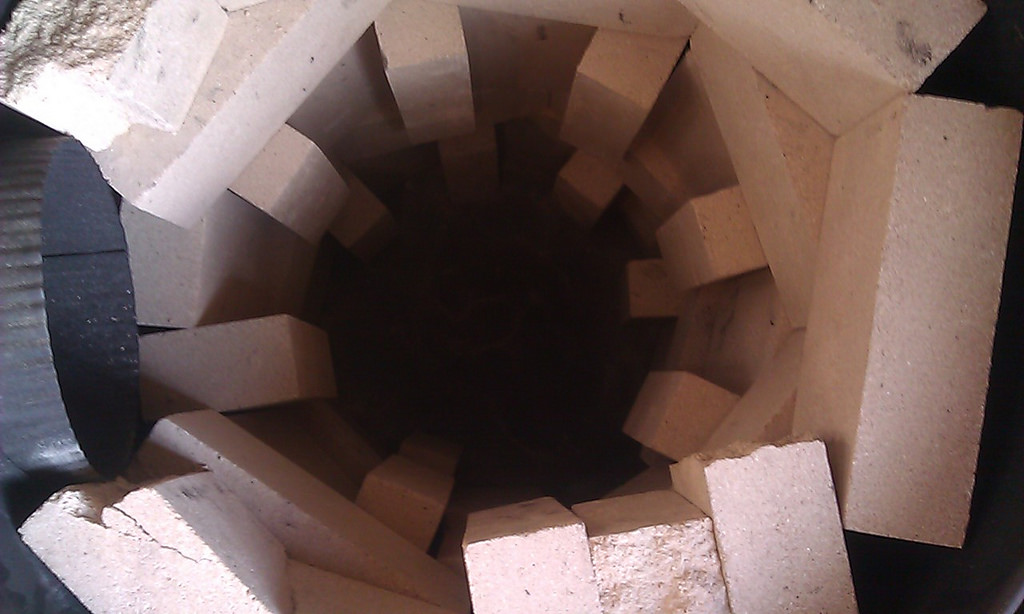 You could also do multipath rise. The exhaust of a rocket, fed at the bottom of a barrel filled with big pebbles. I insist on big, as gases have to go through. The space between the pebbles should be at least half a fist. Then you yake the exhaust, chimney from the top of that barrel. Less efficient in terms of heat conservation, but the slowing down of the exhaust path gives time to the gases to exchange their heat with the pebbles. When the fire is out completely. You can then close the J's feed tube and the chimney to retain the heat in the pebbles and warm your space.


For everybody, i've found that a good trick, to use bare, way larger than usual "metallic chimney" inside the house, the subsequent slow down of gases gives them time to exchange heat with the high surface of the walls of that part. Like just a vertical of two barrels before the ceilling, and reducing back to 6 or 8 CSA of the system size. I think, but, am not absolutely sure, since heat rises, and the exhaust port is at the top, that implementation can't stall the system as too large a bell would. Because hot gases rise. And the chimney is still on top.

Neil G Jay
Posts: 36
4
posted 7 years ago
Forgot to mention that I would be insulating the burn chamber and at least 2 thirds of the upright flue with a min of at least 1-2" of perlight to ensure it will burn at a high temp. Its worth a try even if it doesn't work. It hasn't cost much to build(not more than £50) and I could always use it in my green house to keep the temp up on really cold nights. All im looking for is something that I can heat up that will retain the heat, and that will give it back slowly. After using my gas oven the heat from that can be felt through the house for a few hours afterwards, so I'm really just looking to attempt to do a similar thing but using wood which I can get for free and be able to heat the barrels up outside(due to restrictions on being able to have a live fire indoors) then transfer the barrels indoors where they can release the stored heat, say overnight and save a little on what is becoming an ever increasing amount im spending on my heating bills. I can also move it from room to room or leave it in the hallway overnight where the heat can rise up the stairwell and keep the upstairs warm as opposed to the heat getting trapped downstairs as my rooms have high ceilings, the gap from the top of the door frame to ceiling(abot 2 ½ -3ft) would restrict the transfer of warm air from one room to another(for a short time anyway). It will be something akin to the old storage heater radiators I suppose but it wont cost me anything to heat up. I'll give some feedback when its up and running. I'll be monitoring the temps using a magnetic thermometer used on wood burners to see how fast/slowly it releases the stored heat..
Neil G Jay
Posts: 36
4
posted 7 years ago
Right then, ive started filling the bottom bucket with the thistle sand mix and have put heavy rocks within the mix and man its heavy already. I reckon it weighs the best part of 200lb already. I've found a kind of slag mix of metal/rock which is vey heavy so should act as a pretty good mass and store the heat for quite a while. I'm thinking that I may just fill the top bucket with clay granules(to stop it being too top heavy) but still have the slag rock in it. I'm figuring on doing a 90-120mins burn to get the stack up to temp, then when the fires gone out, transfer it indoors and allow the heat to be released slowly. If its cooling down too quickly I may just insulate the outside and allow heat to come from the inner 6" flue.
I'll put some more pics up in next few days, including the modified shopping trolley(which I picked up cheap from a car boot sale that was from a local company that went bust) that im using to move it back and forth.
Just a quick question. Would I still get the rocket effect / high temps if I put some type of spiral bar inside the upright flue (that was in contact with the wall of the flue to speed up heat transfer into the mass).
I always welome people's thoughts on how to make the stack work better/improve the initial idea.
.

ronald bush
Posts: 138
1
posted 7 years ago
i have had the movable mass thoughts myself. lol stems from not being able to make one inside. my back wouldnt let me feasibly do it though. i made a cast core riser out of clay sand perilite and straw. it weighed maybe 50# and would give off heat for a couple hours. now i dont know if 100# would last 4 hours or not? if we had mass that gave off heat for 4 hours it mite be able to work. questions, thoughts, and more questions, make it fun!

what about the top 2-3 buckets being removable and full of good mass material. then you could pull them in the house and replace them with 2 more to re- heat up. make the bottom one, that gets the abuse, full of refractory material, so it lasts. still sounds like a back breaking way to heat though. not to mention the foot breaking, if a handle lets go. lol

good luck playing around with this

Neil G Jay
Posts: 36
4
posted 7 years ago
The idea of removing the top 2 buckets sounds like a good idea, although having to lift a hot bucket that weighs 220lbs plus might disagree with my back a bit lol. With regards to lifting the 3 buckets, there wont be any lifting as it will be permanently fixed/sat onto a wheeled trolley which will be fired up outside the back door so wont need to be pushed far. I think I'll have plenty of mass with around 200+lb of hard rock /pebbles set into the cob type material within the buckets. I reckon from a smaller version I did using large bean tins filled with cat litter that stayed pretty warm for 2hrs that the bigger version should stay warm and give off quite a bit of warmth but I'll know for sure when its up and running.
Neil G Jay
Posts: 36
4
posted 7 years ago
Right so Ive had the trolley back from the welder and mounted my rmh to it. The RMH is only half filled so far but after an hr and a half burn it gets mighty hot. Its making a really nice roaring sound and drawing air in a treat. Its sitting in the kitchen at the mo but the GF said she noticed the heat in the kitchen even though the heating wasn't on. It gets too hot to keep your hand on it for more than a second. Can't wait for a proper cold day to see how much of a difference it makes. Its making a reallynice roaring sound when lit. The horizontal wood feed pipe is always cool right up to where it meets the buckt.
20141115_163432.jpg 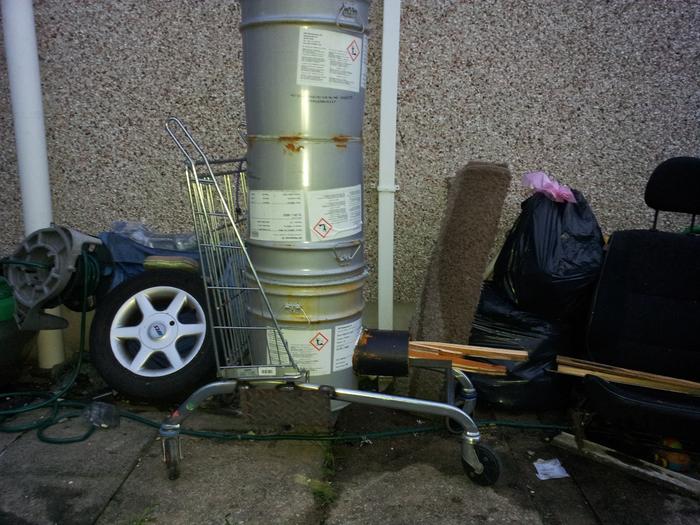