Zach Hurley
Posts: 27
Location: South Georgia Zone 8b
2
posted 6 years ago
I am trying to learn how to care for young plants. I have a couple seeds finally germinating and I also have some seedlings that were bought for me. I am having trouble caring for them. Can anyone direct me to a 'how-to' of young plant care-taking?

I have made a makeshift greenhouse type box. It is essentially two clear containers with one on bottom and top that respectfully 1.) holds water to be used by the seedlings and 2.) holds in moisture. There is a gap inbetween the two boxes for some air circulation. My two paw-paws got burned after the 2nd day bc (I think) they were too close to the plastic box and got overheated.

I've also got some malabar spinach coming up and I don't know how to care for it since it has broken the surface now.

I'm in South Georgia zone 8b. I have no green thumb but would like to grow one if only I knew how. 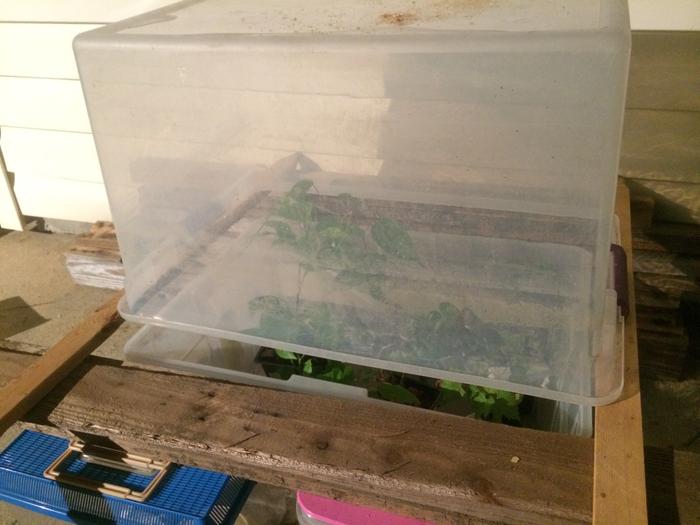 posted 6 years ago
Also, does anyone know how to turn a seedling tree into a dormant bare root tree? I've got a but of Black Locust I started from seed and the ones that didn't get transplanted are in peat pots on my window sill.

posted 6 years ago
well it can be a lot easier than you think, fortunately the seedling does all the heavy lifting and does the growing, you just have to try to provide the best environment as possible.

also fortunately those plants you listed are tough cookies =) those are all easy plants to grow in general, the paw paw is a bit more delicate than the rest, but they all should be fairly easy and hardy.

i dont know what your set up is like but all of those vines would love to be in the ground and grown on a trellis in a permanant place. you can grow them in pots for a while if you arent ready to decide where to put them, and the end of the growing season is near. but they will get a lot bigger and really take off once you put them in the ground around a trellis or something else they can climb, like a fence.

the passionflower will probably die back to the ground over winter, and then pop back up next spring, hence its name "maypop" cause may is about when it pops back up from the roots. the kiwi and muscadine will lose their leaves over the winter and then take off next spring again.

at this time of year its too hot for any sort of covering, they would be fine in pots uncovered. over winter you might have them in some kind of covering, but the plants you mentioned should all live without being protected in zone 8

once you choose a spot for them prepare the ground...i would suggest sheet mulching, though theres a variety of ways to go about preparing the spot where you will transplant them.

maybe someone else will come around with a how to simple guide, or perhaps you should get some books. its a pretty big subject to get to know, but the way of just doing it and figuring it out as you go can work .

i'd like to inspire you to not be intimidated by it though, it is easier than one might think, the plants want to grow and just by paying attention to them you can usually figure out what they need.
Zach Hurley
Posts: 27
Location: South Georgia Zone 8b
2
posted 6 years ago
Thanks for the reply!

I've got a place marked out for most of them but didn't want to stun them with how hot it has been. When I put them in the ground, how do I care for them? Simply water a little everyday? I know that sounds dumb but I simply don't know.

I had them covered to retain humidity. I saw a cool drip system with a 5 gallon bucket that I'd like to try for some trees in the future so I may try it out on these first.

Should I throw them in the ground now? Or try to keep them alive until spring?
John Suavecito
gardener

posted 6 years ago
I think that people think that having a green thumb is an on/off switch. I am 51 and I've been doing this my whole life. You will continue to grow in learning every year if you keep at it. Every plant is different. A general rule is to think about where those plants live naturally and how does it compare to your habitat? Your climate is very different than mine. Many types of fruit trees grow in dry areas. More like my summer than yours. I would watch for how they are dealing with the particular stresses of your climate (HOT!) and see what they need to get by and keep growing. Of what you're growing, hardy kiwi is probably least adapted to your climate. I would watch it carefully to see if it is planted too low or too high at the soil level, which is a particular danger issue for kiwis.
JohN S
PDX OR

Zach Hurley wrote:Thanks for the reply!

I've got a place marked out for most of them but didn't want to stun them with how hot it has been. When I put them in the ground, how do I care for them? Simply water a little everyday? I know that sounds dumb but I simply don't know.

I had them covered to retain humidity. I saw a cool drip system with a 5 gallon bucket that I'd like to try for some trees in the future so I may try it out on these first.

Should I throw them in the ground now? Or try to keep them alive until spring?

it is up to you, but i would. though actually i am growing passionflower, grapes and kiwis as well and mine are right now in large pots...but thats cause i havent figured out where to put them yet. actually i just worked out where some of the passionflowers will go and my friend built a nice trellis for them, so i am planting those out and am going to cover them with thick mulch for winter time to help them establish.

either way would work, especially since you have that set up which seems like it would help through winter. being just outside in pots would be colder than being in the ground, which regulates its temperature better. it you add lots of straw mulch to your plants once in the ground that would keep the roots warmer, if you decide to put them in the ground through the winter. either way because the plants you have are so hardy they should make it.

and how much water is hard to say from here without seeing what you are doing. you have to try it out and see how much it takes in your set up. it depends on a lot of things. again being in the ground can be an advantage for watering, with pots you have to watch them and water more frequently. i often push my plants with watering less, some times you dont know how far you can push them to get by on less water till you push them to, and when they need water it becomes obvious because they droop their leaves. but thats when you have gone a bit too far and they need water immediately!

though as much as that could sound odd its a way with advantages, when the plant doesnt have water given to it all the time it develops deeper roots to search out water from below. if you water all the time but the water doesnt penetrate deep in the soil then the roots stay shallow and the plant is not as resillent. so the general rule of green thumb is to water less frequently but deeply, make sure the water is penetrating and leave watering hose/drip line on for several hours + but only do this once a week or less. though if its super hot and sunny it usually needs to be more frequent, and in pots its like every two to three days.

also when you first are establishing the plants it takes a lot more water, i tend to over water them at that point but it helps get them to establish. once you have it all prepared, water heavily the area right before you plant them, and then water deeply again right after you plant them. then water every other day for the first week or two, just to get them established.

another good general rule of green thumb is *water the ground and not the plant * most plants dont like to have water directly on their leaves, so a spray hose above them (top watering) is not as effective as water from below. i have seen some of the five gallon bucket planters and the ones i saw has some interesting bottom watering qualities.