I found the General Model to be intriguing and the discussions that went alongside. It is hard to pinpoint certain things of interest, because everything is quite amazing.

My favorite part was his discussion of tribal peoples and their applications of patterns. As he was describing the way of Traditional Navigation and its reliance on Pattern Recognition, it helped me to get a deeper respect for First nations people. And it also makes me very curious to want to learn from them!


Bill Mollison wrote: Any event has the potential to spawn all possible events.

I thought this was a very good quote because it takes note of how everything is related and that all that is needed to make things happen is a difference in something.

Today, while driving home from the farmer's market, I saw a tree that looked similar to the one below (gigantic and half-spherical in shape that touched the ground with its branches): 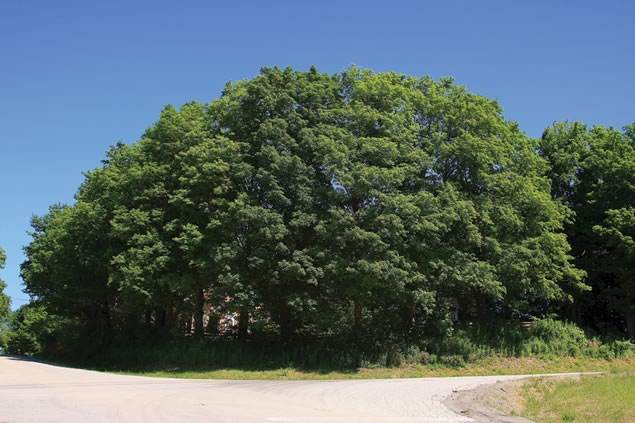 It reminded me of the closed torus form of the General Model, and I wondered if a tree like this would make a good home. It certainly provides good shade and protection.

This was just an awesome chapter! Very dense, too! There's a lot to think about.....

posted 1 year ago
I am working through this book, taking my time to understand everything (at least enough that I feel comfortable moving on).

In section 4.16 I am hung up on a line that reads 'High in the stream gradients (the flattened s-curve of the stream bed in profile) we find insects and fish with suctorial parts able to stick on rocks, ...' I get that a high gradient will cause turbulent fast flow, causing the wildlife to develop streamlined bodies and suction grip. What I dont get is the part in parentheses and how it relates to the gradient.
Is the s-curve the elevation profile of the hill upon which the stream is flowing? Is it flattened to calculate the average gradient over a specified distance?

I know this may seem like a small thing to get hung up on because it does not relate to applying patterns to design work, but I keep thinking about it as I try to move on. Thanks in advance for your interpretation of this line.

"We will never be truly healthy, satisfied, or fulfilled if we live apart and alienated from the environment from which we evolved." -Stephen Kellert

Justin Gerardot wrote:
Is the s-curve the elevation profile of the hill upon which the stream is flowing? Is it flattened to calculate the average gradient over a specified distance?

I know this may seem like a small thing to get hung up on because it does not relate to applying patterns to design work, but I keep thinking about it as I try to move on.

Just last week I finished re-reading Chapter 4.  I was following it all quite well and then I got to that same point in the chapter about the fish.  I moved on cause I was like "huh?"  Attached is a picture I drew with three interpretations as to what I think he is trying to say.

A) You are correct in your visualization of the hill profile.  He's referring to the general pattern of water flowing downhill in profile view.  It looks like an S that is very flattened out, with changing slopes. Water starts off slowly high up in the landscape at the lowest orders (aka rills and runnels), and it picks up speed as it merges and moves along to the highest gradient (highest slope, that is or "fall over distance" as he explained earlier).  This high velocity zone is highly oxygenated as well as erosive, and therefore fish and insects are designed to hold on tight or flatten down or streamline themselves in this region of both turbulent and laminar flow.

B) He's referring to the same location, but is referencing just a slightly different section or profile view, which is the plane normal to (aka perpendicular to) streamflow.  It also looks like a flattened S-curve...well two actually, one on either bank.

C) When he says "the flattened S-curve...in profile" referencing the stream bed, he is actually making an analogy to the General Core Model (GCM).  The GCM has S-curves going from top to bottom and bottom to top, swirling through the origin.  See S1, S2, etc. on the GCM several pages back.  At either end of this S curve happens collection (like erosion) and deposits (aggradation).  But the flattest part of the S-curves happens at the origin where streams converge.  This is the fast part of the GCM, like the center of a black hole.  Likewise, streams converging on high slopes are also the fast part of the model, and therefore the ecology adapts to this pattern.

D) All of the above, or something completely else.  Something that only "an experienced man" like the one on page 96 would intuitively um...feel.