A Tale of Three Wheelbarrows--Or, Don't Buy Plastic #&^$#@-ing Wheelbarrows Because They Suck

posted 6 years ago
I used this plastic thing my neighbors have, to move some dirt about 15 blocks from another person's house. It has a handle --yes, a single handle--that sticks out about a foot. It does not get out far enough to go by your hips so you can hold it with your arms straight down by your sides.

It took me about a half hour to take it 15 blocks, and about 20 breaks.

But Old Noisy was going to bother all the residents of Davis Square, Somerville, Cambridge, Lexington, and Afghanistan, as it went over the bricks empty, so I decided hey, letm e borrow the wheelbarrow from the the guy i"m getting the dirt from.

This one was plastic too.

It had handles in the right place. From first glance I'd even thought it was metal.

Oh God, this thing was wobbly, and amost careened into the wall several times. I needed to take about 10 breaks to get it back to my house.

Granted, I'm not in the bset shape, but I was already exHAUSTED from the first wheelbarrow. The second one was SOOOOOOO easy. I didn't even need to stop and rest once. And that was also after wheelbarrow #1.

That litlte bit of wobble is enough to make a huge amount of energy drain off. PLastic wobbles. It is not stable. It is not the appropriate material for a wheelbarrow. It would be fine if you nailed a cuple of 2x4's on the bottom, but given the strength of the other materials I expect the wood might not hold up to a nail in it.

The point is, a simple change of tool can make a huge leveraged difference. And whoever invented the cart in hte first place was paying attention to their experience, I think, and made long hip-height handles on it. Whoever designed these plastic things obviously never tried to move 200 lbs of dirt with it or they would have seen how much of an added drag it is.

And I highly suggest you get a metal wheelbarrow even if it is more expense, if you're ever going to have to move a large quantity of dirt or compost or anything. Or even if you don't think you will you never know what might be.

No offense to the folks who invented the plastic wheelbarrows, but I really think you'll see the difference if you try each one, and you'd design it differently.

posted 6 years ago
This also was something I thought of -- if you can design a worse barrow can't you design a better one? and then I thought Paul has probably done that. ANd in fact he has:

I WANT ONE! (hint hint my birthday is coming up.) (Maybe I"ll just take wheelbarrow #1 and attach bike wheels to it).

posted 6 years ago
AND I'm still gonna bum the other one off my other neighbor (they will be the first to enjoy surplus from the garden when it finally produces some, I swear!) because:

These carts are great. They are often known by their original brand name "Gardenway Carts". They've always been pricey, so that's not unusual.

However, don't throw away your wheelbarrow just yet! Wheelbarrows evolved over a long time. They're still around because there are some fantastic design features that a two-wheeled gizmo can't emulate. For instance, wheelbarrows are the most practical if you are traveling across a slope. Any two wheeled contraption will list and, if it's full, potentially tip when crossing a steep slope. You can also turn tighter corners with a wheelbarrow and get into tighter places (e.g. garden paths).

That's my homage to the wheelbarrow!

(from that same thread)

Jennifer Wadsworth
Posts: 2679
Location: Phoenix, AZ (9b)
194
posted 6 years ago
I've used a plastic wheelbarrow before and swore NEVER AGAIN. I had exactly the same problems you did.

I will also say that I will never use a wheelbarrow with an inflatable tire here in the desert because every dang plant has thorns. It's solid tires or nada! Also, for carts - larger solid rubber tires are essential here. I once tested a cart for Fiskars that had small plastic wheels. If the cart had any weight in it at all, the small wheels were useless and I would basically be dragging the cart along on it's bottom.

Posts: 7926
Location: Currently in Lake Stevens, WA. Home in Spokane
323
posted 6 years ago
Those 2 wheeled ones are great for heavy loads.
You don't need to do a balancing act to get from point A to B.
Much easier on the arms and legs.

Their down side is that they don't maneuver as well in tight quarters.

Each has its place, and I whole heartedly agree:
Don't buy one of those plastic ones. You will curse it from Day 1 to its demise.
(I have seldom seen one without a huge crack in it.)

Dale Hodgins
Posts: 9002
Location: Victoria British Columbia-Canada
676
posted 6 years ago
I have a top quality steel one that cost $211. Everything works perfectly. It is built to last. It's too big for most doorways.

When I have to move bricks, plaster etc, in tight spaces, I use a good quality plastic one. Hundreds of loads have traveled in the green one pictured with my hedge cutter attached. I've carried it up many stairs and onto many roofs. The plastic sides are less likely to damage doorways.
20141126_140913.jpg 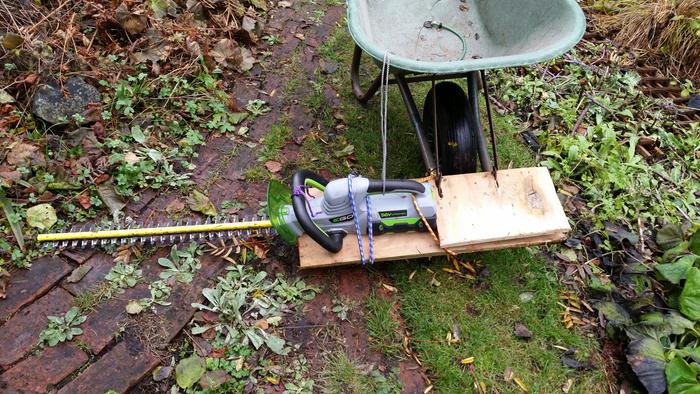 Dale Hodgins
Posts: 9002
Location: Victoria British Columbia-Canada
676
posted 6 years ago
The system won't let me add to my other post.
After about 25 chimneys, I threw something from too high and cracked the tub. Almost vertical sides are best. Less tippy and more maneuverable.

I hate the two wheeled models. They waste energy with side to side rocking on uneven ground and material bounces out.

My big steel wheelbarrow can handle 300 lb. If I have more than that, a second trip is made. I generally load under 175 lb into the plastic one.
Burra Maluca
Mother Tree

Dale Hodgins wrote:
I hate the two wheeled models. They waste energy with side to side rocking on uneven ground and material bounces out.

I know this is wheelchairs, not wheelbarrows, but I just stumbled on this and thought it was interesting...

posted 6 years ago
Thanks guys. This gives me mroe ideas.

And what about going beyond what is? Some thinking/brainstorming (using de Bono thinking tool)...

PO wheelbarrow does not move things around. --- what are advantages to working with what's already here? do less, just give nature a nudge?
PO wheelbarrow does not lift things up. in what ways do natural systems move things along the ground instead of carrying them above ground, what advantage might that provide? connection
of the dirt pile's original location to the final location? maintaining of microclimatic factors or microbial habitat or other factors? what is of value from having someting remain connected to the groun?
PO wheelbarrow does not contain anything. ---what if you move something without containing it, what if you move it by pushing only but letting stuff spill out organically?
Wheelbarrow PO source of what is wanted. what is naturally making its home in the microenvironment of the wheelbarrow?
PO wheelbarrow is made of wobbly material. what advantages are there to wobble? how does nature "use" wobble? how does nature stabilize things flexibly? (shock absorbers on a wheelbarrow?)
PO wheelbarrow is exhausting. what is the advantage ot having a good workout from the crummier wheelbarrow? if doing muscles are used for being functions this creates more awareness of the being functions...
Wheelbarrow PO endometrial (having to do with the lining of the uterus). what other materials would give benefit to a portion of earth moved from one location to another? what if the wheelbarrow could be a womb? what if the wheelbarow added some nutrient or fungus to the soil with each load? what if it poured earth in a contractile pattern rather than a rigid pouring?
Wheelbarrow PO expelled from Communist Party of China. What political assumptions have I made in choosing to wheelbarow my loads? (I did try a couple of times to score help with a truck but it just didn't seem to show up...maybe be lazier and wait till someone calls me back).

What if I could ride in my wheelbarrow? (It was a nice thought that Icould have a cart and bike the load through the streets.)

I don't especially want to solve thsi one problem this much, but to see what other problems I can additionally solve that I haven't encountered yet or may never.

What if an extra wheelbarrow were repurposed to be a mobile microclimate garden that easily chases the sun around the yard over the course of the year?

So much depends
On a red metal wheelbarrow
Next to the heritage jungle fowl
Who are using it to shade themselves while producing manure for the garden in a localized area that makes it easier to pick up and distribute later.