Vertical Batch Box; A Potential Design Add On for the J Tube RMH

Thomas Vogel
Posts: 36
posted 7 years ago
I built my J tube rocket mass heater in November, '14. Almost from the beginning I burned sticks too tall for the system and experienced "chimneying" affects. I also noted my tendency to push well burning sticks down in to the bottom of the J tube. Naturally this constricted airflow causing it to accelerate. Adding more sticks in the feed port allowed more time to go off and do something else. Feeding my pet dragon is a kick but I do have other things to do. Anyway, perhaps these were similar experiences which inspired Peter Van Den Berg to design the horizontal batch feed.

Since I didn't build a horizontal batch box into my new rocket mass heater I've had the thought of using the same principle in a batch box built vertically over the feed port. Then one can load longer wood, reload less frequently, solve the "chimneying" problem and have room for additional mass between the heat riser and this box. As an experiment, I bought a cheap spaghetti kettle at the second hand store, cut a 2 by 7 inch slot off the rim of it and inverted it over my feed port. The slot acts as an extension of the air intake.

I set some tall sticks in the feed port and lit them up. When heat, smoke and a little flame began to chimney up the sticks, I put the spaghetti pot over it. It turned a bit scary seeing smoke and flame outside their proper place. But to it's credit the spaghetti kettle contained all the smoke and flame. Yes, the top got plenty hot. The air wooshed through the slot right into the feed port. All fire and smoke were contained! So it appears I have a successful experiment.

What if...
One built a bell over the feed port.
Add a masonry wood stove door with (optional) refractory glass.
Include an air intake slot beneath the door.

Voila! A vertical batch system add on (I hope!) At this point I hear Ernie saying, "why don't you build one and let us know how it turned out." And I will if know one else has.

Anyone there able to validate or invalidate this? Thank you in advance!
Tom
Glenn Herbert
gardener

Posts: 3665
Location: Upstate NY, zone 5
253
4
posted 7 years ago
The one big problem with this is that you will have a big hot container of pyrolizing gases that really want to rise. You would have to configure it so that you can open it without getting a fireball. I'm not sure there is a way to do that while being vertically fed.
thomas rubino
Rocket Scientist

posted 7 years ago
Hi Tom; Your feed tube size isn't changed ... so your just using longer wood , might get you an extra 30 minutes between feeding. what were your temps at the barrel during this burn ? Was your chimney steaming or was it smoking ? 2"x 7"air slot in your can sounds like you would be starving for air . My opinion is this a body part burner or worse a fire waiting to happen.... But with care ,give it a try and let us know . You could convert your J tube into a batch box as matt walker did and see if a batch box burn suits your style better.

Posts: 3450
Location: Southern alps, on the French side of the french /italian border 5000ft elevation
177
posted 7 years ago
By the way, it has already been done. If you search here well, you'll find it!

Thomas Vogel
Posts: 36
posted 7 years ago
Tom R.,-- the gap in the kettle was just for the experiment. E&E have a chapter in their DVD on Building RMH's (8" Bonnie on the cover) where they keep a couple of fire bricks near the feed for adjusting air flow. It shouldn't always be 7.5"x7.5" Thank you for the consideration!

Glenn-- I never considered the old, "big hot container of pyrolizing gases" trick. Therein, lies the rub. Flashback... end of story. To that end I recall once (and only once) covering the embers on some burning sticks (using a spare piece of refractory wool) to concentrate airflow. Wrong. I should have covered the open space-- the other side of the feed tube so the concentrated air would pull the smoke in. When I lifted the wool to peek in, WOOSH, a big ball of smoke right in the face. Lesson learned! Yah, I can see that happening with a stove door. Thank you!

S.A.-- I guess the search terms I put up didn't jive. I've not read thoroughly through all the threads. But FWIW, I've been studying two years before making the leap to build my current heater. This is just a quick question with a short answer and I got it in just over two hours. Thank you anyways!

Posts: 3450
Location: Southern alps, on the French side of the french /italian border 5000ft elevation
177
posted 7 years ago
Does pic 3 seem familiar?

Thomas Vogel
Posts: 36
posted 7 years ago
That's obviously a bell over feed tube with a masonry door in front. Can't tell what the door to the left is about. The main door opens to what appears to be an L-Feed. Fire is back in. Doesn't appear to relate to my query. Maybe you can clarify for me S.A., thanks.
Tom
Byron Campbell
Posts: 266
Location: US, East Tennessee
22
posted 7 years ago
The clean-out door to the lower left is most likely to access the ash-pit / manifold area.

Posts: 3450
Location: Southern alps, on the French side of the french /italian border 5000ft elevation
177
posted 7 years ago

Thomas Vogel wrote:That's obviously a bell over feed tube with a masonry door in front. Can't tell what the door to the left is about. The main door opens to what appears to be an L-Feed. Fire is back in. Doesn't appear to relate to my query. Maybe you can clarify for me S.A., thanks.
Tom

It's not a L tube, but a J tube. A J which was smoking back IIRC.

To me that sounds rather close to what you were describing.

Posts: 3450
Location: Southern alps, on the French side of the french /italian border 5000ft elevation
177
posted 7 years ago
Or you prefer this type of magazine?

Well, there have been ideas before. Not quite like yours. But not far of! 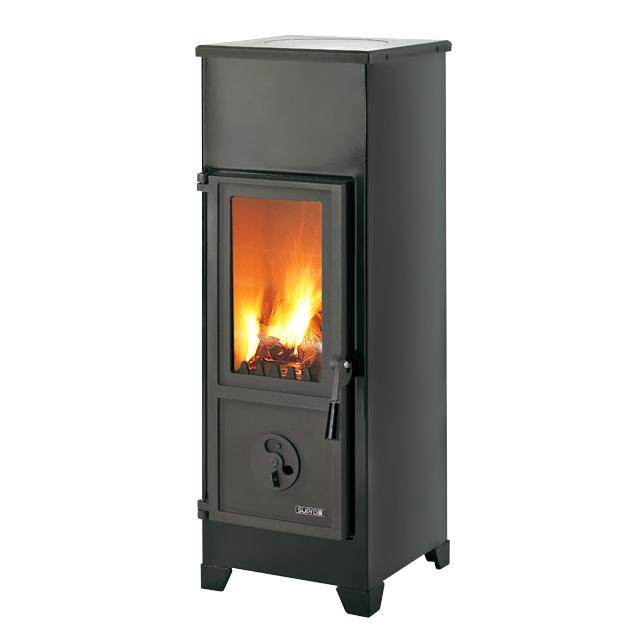 Over your J tube's feed. I think it's doable. I would add outside air!

posted 6 years ago
The backflash fireball is the big deal-breaker for me on these ideas.
I have similar concerns about fitting outside air to a J-tube - if you put it too low it's a leaky siphon, if you make it too tight it heats up and makes a taller feed chimney (siphon with the legs too equal, doesn't draw strongly enough to eliminate smoke back up the feed), if you make it big and voluminous above the feed, it's a smoke collection chamber with fireball potential.

That's the big difference between anything located above the feed, vs. a horizontal thing located entirely below a certain height - say, 1/3 to 1/2 the heat riser height. I still have concerns about smoke drooling out the upper part of a batch box when the door is opened; there may be some tweaking of the door size itself to give good access but still limit the size so that there is almost enough draw to keep the air flowing in, not swirling around.

One reason the original designs don't use a big showy glass door is simply the price tag on doors. 2 bricks or a reclaimed metal can are a lot easier on the budget than a fire door complete with glass window and hinged frame to mount into masonry.

As far as air feed: it doesn't have to be 7.5x7.5 throughout the burn. Peter van den Berg has tested his numbers for the batch box; the air feed for a certain internal diameter (ID) heat riser is the same whether you load the box half-full or up to maximum (2" from the top, front, & back). Here's his dimensional charts: http://donkey32.proboards.com/thread/734/peterberg-batch-box-dimensions

The batch box is probably the cleanest burning option that's compatible with what you have in mind. It might also be worth looking into contraflow stove designs from Sweden, Finland, Russia, or other sources; they are an all-masonry heater using the same up-down flow as a rocket, but without the J-type feed. If the missus also has aesthetic problems with the steel drum, there's ways to decorate it https://permies.com/t/12578/rocket-stoves/Oil-Drum-Living-Room-design, or it might be worth doing a catalog search on classic masonry heater finishes and see if something sparks her interest. Then talk budget after that

Rick Frey
Posts: 45
Location: Oakland, CA
2
posted 6 years ago
Not sure what I'm missing but I feel like I saw this basic idea here a bunch of times. My version of the solution was to put a 3' section of 8" pipe over my feed tube, cut a slot at the bottom of it for air and put a lid on it once it's loaded with wood. There's no chimney effect because nothing can get out the top and the air flow direction is through the heater. Yes, the tube gets warm, but it's not hot enough to pyrolize the wood and pre-heating the wood helps combustion. I use bricks to block varying amounts of the opening on the bottom of the feed tube extension. I burn close to 4' lengths of 2x4 and very straight sticks this way all the time. It's been too hot lately where I am to use my heater, but this is the rough setup I use (that is fire insulation under the piece of wood on top of the feed tube extension

I've actually been wondering about not having the air gap on the bottom of the pipe, but actually having it on the top of the tube. Maybe this could only work for me since I use a fan to create the draw, but this would pull the air from the top, letting it warm as it goes down, it would pull any smoke and wood gas down into the j tube and it would avoid the possibility of a small chimney effect smoking out the air gap on the bottom of the feed tube extension.

The version of this that I'm still trying to figure out is how to fill that same 3' section of 8" or 10" pipe with wood chips and let those feed into the burn chamber. I saw one version on youtube where the guy did a ton of welding and built this impressive set up that let it slow feed onto a grate at an angle, but I don't have the space he did and the expertise to build what he did. Every version I can think would have the bottom of the metal pipe in the actual burn area and the cost of the tubing it would take to last in those conditions is more than I want to spend. I can picture some kind of auger feed, but the wood chips I have easy access to aren't that regular. So for now, it's either feed my heater pretty regularly or be happy when I get scrap 2x4's, old pallets or long straight sticks. 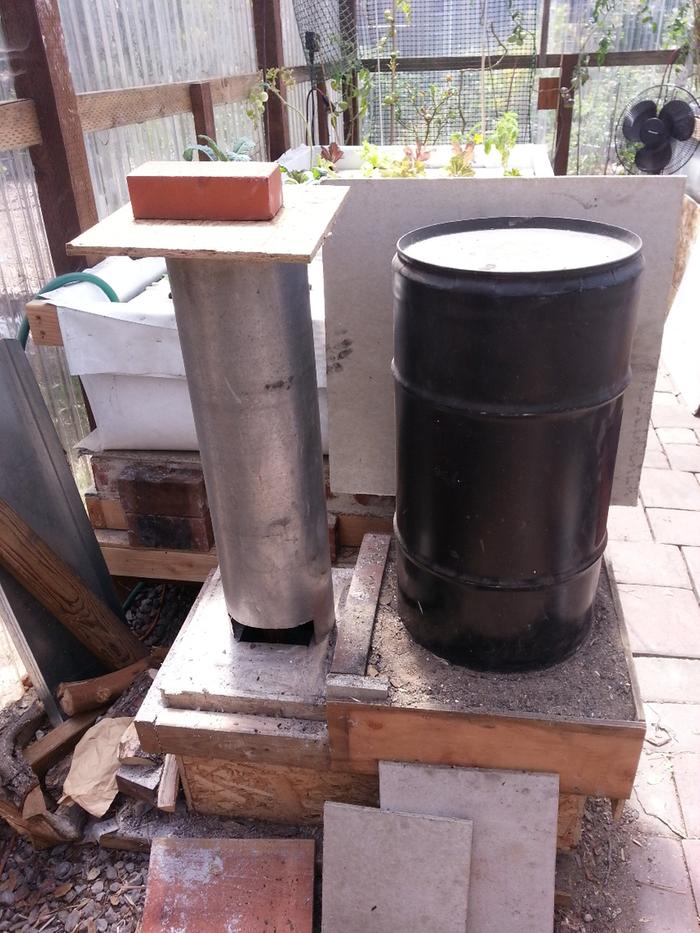