posted 7 years ago
The people on my local (statewide) wildcrafting group are wild about purslane, but I never saw any on this land or anywhere nearby. Then I planted some fig seeds off of eBay in a six-cell tray using my local potting soil mix (decomposed wood duff from my oak forest plus a bit of raked-up leaf mould). The fig seeds didn't germinate but this plant sprouted in one of the cells. It looks like every description and picture of purslane I've seen, it's moist and crunchy and slightly mucilaginous and very tasty (the little piece I carefully sampled anyway) and surprisingly not-fibrous, even in the stems. I know some people (waves at Joseph) consider it a horrid weed, but it looks to me like an awesome ground cover that will store water, shade out other things, and be harvestable by the armload (if it thrives) as a moisture-containing mulch to put around drought-stressed plants. Plus, if it's purslane, it's good in soups and salads, albeit too high in oxylates to be eating it in stupid large volumes.

What say you clever people: is it indeed purslane? Because if it is, I'm going to nurture it and plant it in my orchard area and eat of it frequently. 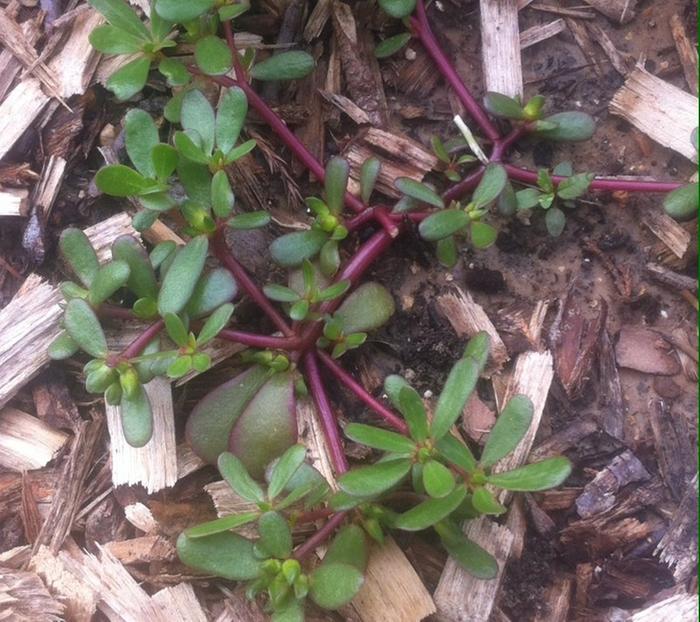 The stems are a bit darker than I remember. I've seen the leaves go from thick like a succulent to thin and leathery. The stuff around here has a tiny lemon flavor to it. Since you mentioned encouraging it, it also seems to like growing on rocks or concrete.

posted 7 years ago
Mitch, Ryan, thank you! And Ryan, welcome to Permies.

This plant doesn't have the oft-described lemony flavor, but we've been inundated with record-breaking rainfall, and I suspect it's over-watered.

Because of previous poor stewardship by oil and grazing lessees, we have several hundred square yards of bare sandstone on the property, with soil-filled cracks currently growing grass tufts. I might be able to get it established there, which would be awesome.

Alex Veidel
Posts: 129
Location: Elgin, IL
3
posted 7 years ago
Sure looks like purslane to me!

Scott Strough
Posts: 299
Location: Oklahoma
21
posted 7 years ago
Yes it is purslane and it is an very beneficial companion crop. Especially beneficial to corn due to the strong taproot which can penetrate compaction layers, even tough plowpan, and the corn roots will follow the purslane roots down. Also an effective groundcover living mulch for peppers.

Keep in mind though, this is the wild purslane, garden purslane is more upright.

posted 7 years ago
yes, starting to read all about it and it sounds great!

Joy Oasis
pollinator
Posts: 405
93
3
posted 7 years ago
It is purslane, and it is very healthy to eat. It even has vit. B12.
Fred Tyler
gardener

Posts: 633
Location: Wheaton Labs, MT and Tularosa, NM
539
8
posted 7 years ago
It spreads very easily from seed. At the tips of those stems a little cone will form. When you break it off, you will see it is full of tiny black seeds. Scatter them around and next year you will have tons more purslane.

In our garden in Minnesota it seemed to act as a good ground cover, and didn't seem to compete much with the other plants.

I haven't seen any growing here at Wheaton Labs, so if someone has tons of extra seed, please send us some and I'll be sure to sow it.

Dan Boone wrote:What say you clever people: is it indeed purslane?  Because if it is, I'm going to nurture it and plant it in my orchard area and eat of it frequently.

I love purslane, and yes, that is it. The plants can look different depending on the ph of the soil. It seems to like soil that is acidic enough to grow blueberries, but less than perfectly balanced. It grows well up near Henryetta on a friend's blueberry patch and over in Tecumseh, but not very well in Hughes County - at least not near here or on this place. I tried transplanting some from the blueberry patch, but it didn't make it. It also likes a lot of water. It was growing where the blueberry irrigation was and against the house in Tecumseh where rainwater ran off the roof.

It is delicious on salads and in stir fries. And I saw someone feeding their chickens or goats or something with it? I can't remember, but it was in a video on YouTube. He lived where irrigation water would overflow and the purslane was growing in a cement gutter, so he took a scoop shovel and started rolling it up in big bundles and threw it on his truck. Great way to have organic, non-gmo feed for free (assuming the water that was making it grow so prolifically was clean).

I don't know about "Stupid, large volumes", but I ate it on salads at least several times a week for a couple months and it didn't bother me any.