Rhodesian Ridgeback; have you ever taken a look at this dog? Rhodesia, modern Zimbabwe, used to be a Dutch colony (like South Africa where the VOC [Dutch East India Company] held sway). My Dutch heritage sometimes inspires me and this is perhaps the one true 'Dutch' dog. Bred by Cornelius van Rooyen [a real Dutch name], it is a true mix of the Netherlands and Africa.
The Rhodesian Ridgeback was bred to hunt wild game and as a guardian dog. This dog's independent, mild-tempered, intelligent, fast, strong, and fairly large. They are extremely fast and agile but not scrawny. This is a dog to fear nothing or nobody, to be loyal to those who love him, and bred to suffer African heat and drought.

What this dog is NOT...
- barking
- friendly to strangers [seriously, some of them won't even offer a stranger a glance and keep staring in front of them]
- shedding or needing grooming
- smelly
- fragile
- needy

Many lovers of this breed are convinced that this is the ultimate dog. I of course agree. Having said that, how suited are they to guard animals and serve as all-round guardian dogs to a (small) farm? I would appreciate some feedback on that one.
Jan Dohner recently suggested this list of breeds as livestock guardian dogs:
Akbash Dog
Anatolian Shepherd Dog
Caucasian Mountain Dog
Central Asian Shepherd
Estrela Mountain Dog
Gampr
Great Pyrenees
Kangal Dog
Karakachan or Bulgarian Shepherd Dog
Komondor
Kuvasz
Maremma Sheepdog
Polish Tatra Sheepdog
Pyrenean Mastiff
Sarplaninac
Slovak Cuvac
Spanish Mastiff
Tibetan Mastiff
Tornjak
I was of course shocked not to find the Rhodesian Ridgeback on that list

As far as i'm concerned a dog should fulfill many uses, like
- scare away or intimidate undesirable people and animals, particularly other dogs
- guard the animals
- love the kids
- hunt
- be quiet when nothing's wrong
- maybe pull a cart or carry a backpack
The Ridgeback checks off every one of these wishes.

In my perfect dream world i might like to have at least one Ridgeback, a Viszla, and the perfect WATCH dog: a chihuahua 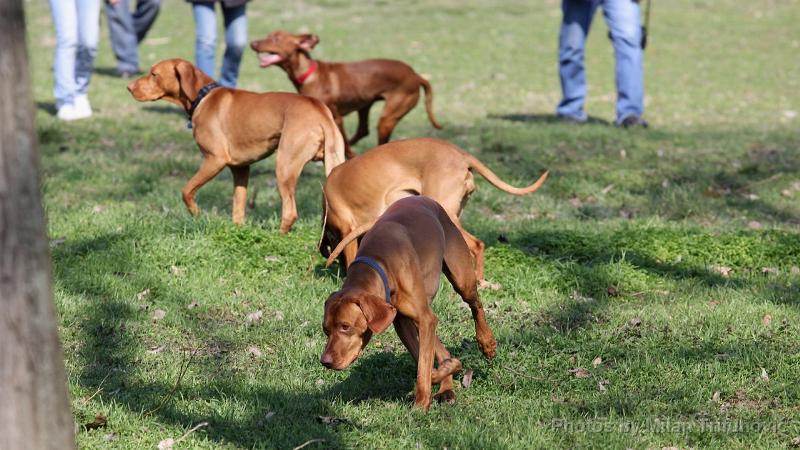 The Viszla looks a lot like a Ridgeback but that's really coincidence (though it's great they both require little to no grooming). The Ridgeback bitch and Viszla male are actually the same height, though the Ridgeback would be heavier. Viszla's are in many ways the opposite of Ridgebacks: 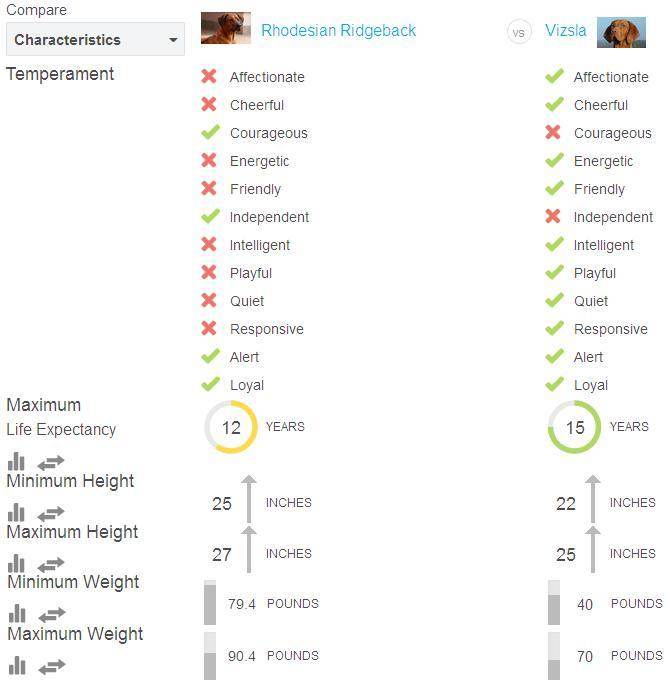 The main reason to desire a Viszla is that they have a keen nose (unlike the sight hound Ridgeback).
P.S.: when dog breed sites say "intelligence", what they usually really mean is "trainability", i.e. how 'obedient' and 'responsive to (usual modes of) training' they are. Actually, Ridgeback's are too smart to care about performing tricks, hence they are perceived as unable when it's really about being unwilling to perform pointless tasks (which is a good sign of both intelligence and pride if you ask me).

Why do you feel safe when mankind has only proven to be able to survive 12,000 years at a stretch...? Be prepared for the next probable end: http://www.teomcrote.co.nf
Security: Rhodesian Ridgeback; Animals: Scobies and rabbits; Diet: Born to Run; Religion: trust no one; my best posts/replies so far

posted 6 years ago
I've met one in person, they are very cool, though I'm not surprised it's not on the list. The classic livestock guardian dog lives 100% with the stock, where you are describing a real farm utility dog that does it all. The Ridgeback sounds great for a lot of things. There's the Northwest Terrier that's been discussed here before. And I'm kind of intrigued by the Wheaten Terrier breeds, if I could find one that was from a working line. We are starting a McNab Cowdog puppy right now. He's in the teething phase, which makes the biting tendency worse. Definitely not a general purpose farm dog, but it's an interesting ride so far.

Hester Winterbourne
Posts: 431
Location: West Midlands UK (zone 8b) Rainfall 26"
97
posted 6 years ago
I have been told, Ridgeback bitches are very protective of their "family" to the point of being tricky if not carefully trained, and the dogs are relatively more laid back. From the few I have encountered, this seemed to hold true.
Dale Hodgins
Posts: 9002
Location: Victoria British Columbia-Canada
692
posted 6 years ago
Their tails can clear everything from the coffee table, lamps included.☺
Michael Horton
Posts: 13
posted 1 year ago
I had a family friend who owned a ridgeback growing up. They are fabulous dogs and gorgeous in person with a very impressive deep bark.
Mike Harris
Posts: 53
Location: Wilderness, South Africa
18
I like...

posted 1 year ago
I grew up with ridgebacks and have had plenty of experience with them as an adult. For what you want a dog for, I would strongly advise against using a ridgeback for this purpose. If brought up right, ridgebacks are giant lap dogs. They are tender, sensitive, confident and incredibly intelligent. They are tremendously loyal which sometimes comes across as aloofness towards strangers. However, strangers that have been welcomed into the pack will eventually be accepted by the dog. They need a confident trainer in their puppy years that will keep things interesting, use positive reinforcement to emphasise a lesson and NEVER use negative reinforcement. As I said before, these dogs are tender and sensitive with their pack. They need a strong leader to look up to within the pack otherwise they will happily assume that role. As these dogs are so smart, if they don't see the point in what you are trying to get them to do they will lose interest in a hurry. Ridgebacks will not chase a ball that you throw for them because whats the point of bringing this thing back to you if you just throw it away again immediately? They should be integrated into family life and they will easily become a core family member that is loyal, at times a goofy couch potato, at times a tireless running partner and always a joy to behold.

Brought up wrong, you will be confronted with the nasty side of the ridgeback. Brought up as a 'guard dog', you will be toying dangerously with the power and instincts of a dog bred to hunt lions. When their aggression does surface, most often due to incorrect upbringing and occasionally due to a real threat to the pack, the dog will not be stopped until either it or the aggressor is dead. If you have not established yourself as the gentle, loved and respected leader of the pack and have made the mistake of attempting to cultivate the 'guard dog' instinct in the animal, you may find yourself on the wrong end of a powerhouse of terror. Besides this obvious danger, mistreated ridgebacks are destructive, very difficult to handle and will have no respect for their handler.

It is my opinion that ridgebacks are the ultimate canine companion. They seamlessly become part of the family as a beautifully packaged parcel of love. If there is a real threat to their pack, they will tear apart whatever the threat is. They are not, however, dogs that should be used to intimidate as they do not bark, growl or show aggression in the usual ways. They calmly and quietly observe the situation from a distance and will only act when they perceive a real threat to the pack, at which point the results will be devastating. Treat these dogs with confidence, tenderness and love and you will have a shadow for life.

I see you are in Morocco. Have you looked into what canines the locals use to safeguard their livestock? This might be a better option for you. The locals will most likely use a local variant of the Africanis, a canine that has evolved alongside humans and their livestock for centuries.

posted 1 year ago
In general, hunting dogs have high prey drive, and LGD have low prey drive with very high territorial drive. Everything is on a scale and there are exceptions, but in broad terms, hunting dogs rarely make the best LGDs.

posted 1 year ago
Mike, you are spot on!!! Good comments.

posted 1 year ago
Thanks Su. Having had plenty of experience with these dogs I feel a responsibility to let others know about how to treat them correctly. Others lives may depend on it.
Devin Lavign
pollinator
Posts: 1050
Location: Pac Northwest, east of the Cascades
305
I like...

Trace Oswald wrote:In general, hunting dogs have high prey drive, and LGD have low prey drive with very high territorial drive. Everything is on a scale and there are exceptions, but in broad terms, hunting dogs rarely make the best LGDs.

Yep this is my main thing, I am most interested in LGDs.