posted 5 years ago
So I found a couple of old iron smoothing irons upstairs (pictures below) and wondered if anyone had any experience using them.

They are rusted and rough. Normally to restore old cast iron cookware I would polish them up with steel wool and season them, but I'm guessing I don't really want any seasoning on my iron!

Googling yielded the information that pre-electrification women were generally annoyed by the requirement to keep their irons lightly but regularly greased, but I'm not sure with what. Cooking fats seem like a bad idea for something that'll be used on fabric. I saw that beeswax was used in the olden days to keep them from sticking to starched fabrics, but that seems to be a separate thing from the greasing they refer to.

I'm also wondering about heating them up and keeping them that way. We don't have a wood stove (alas), just an electric range & oven, a fireplace, and a small camping wood burning rocket stove to use outdoors. I'm thinking the cleanest and most convenient way would just be to heat them directly on the electric burner. I'd also like to experiment with my wood burning options, but the fireplace and rocket stove seem likely to result in sooty irons and ruined fabric.

The internet also tells me that cast iron trivets were generally used to rest them on while ironing, and that often one iron would be left heating while the other was being used, and then they'd switch out.

I'd like to get into sewing and quilting at some point, so I thought they might do for pressing seams (I don't currently iron, because I am a giant slob) but I don't want to get soot or grease all over my fabric or singe it.

Any advice on restoration, maintenance, and use would be appreciated!
IMG_0438.jpg 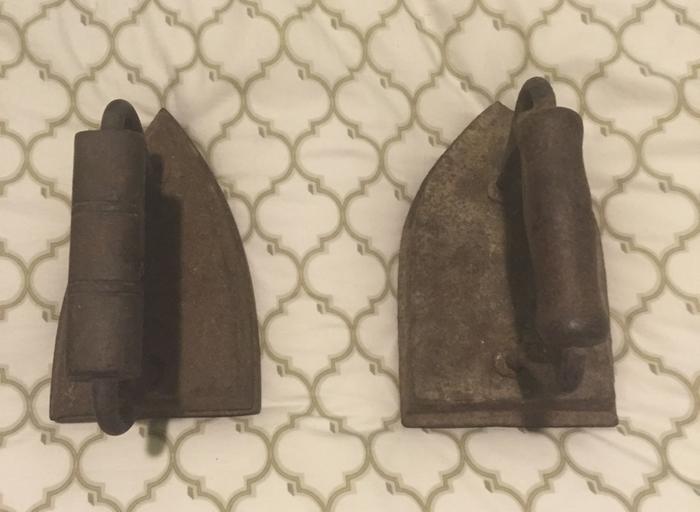 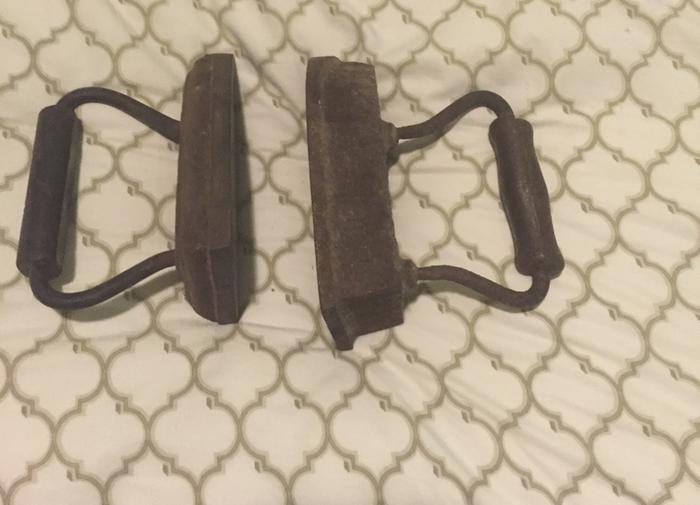 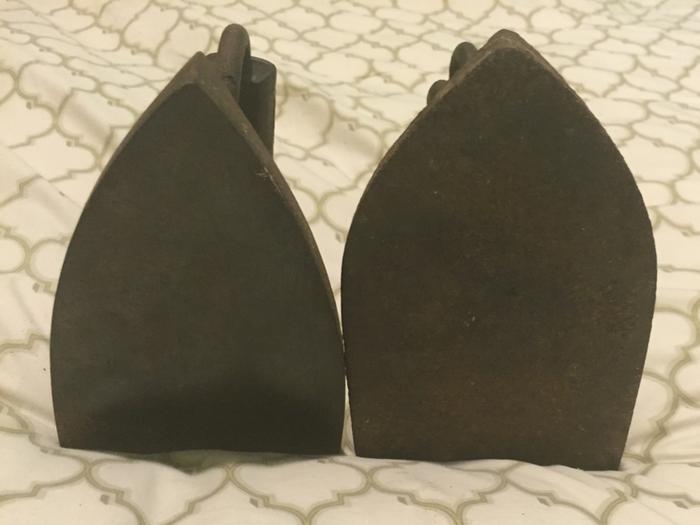 and reading is as follows .
1 Clean as you possibly can be . Yes some folks used a bit of light oil but this left marks on light coloured material
2 Many modern fabrics forget it as it is so easy to get the material burnt Cotton is best .
3 Using two or even three in rotation works best .An electric range would be the best of your options . Remember you will have to hold the iron with a cloth as the handle gets hot too.
4 Damp cloth works best

posted 5 years ago
My other half was a batman waiter in another life, and although these days we don't have an iron to our name, he does have a few memories to share.

First, most iron-irons had a stainless steel 'shoe' in his experience, though I suspect this was only in more modern versions.

Also, you would never iron directly onto fabric, always through slightly damp newspaper, which acted as a steam iron and simultaneously kept the fabric clean.

I also have some very old memories of irons with a box on top for holding hot coals, but I never saw one in use.

Jennifer Richardson wrote:So I found a couple of old iron smoothing irons upstairs (pictures below) and wondered if anyone had any experience using them.

They are rusted and rough. Normally to restore old cast iron cookware I would polish them up with steel wool and season them, but I'm guessing I don't really want any seasoning on my iron!

It's my belief that you actually do want them seasoned.

Because of my folks' "back to the land" schemes in the early 1970s I grew up living the frontier lifestyle on the Yukon River, complete with no utilities of any kind and all-wood heat. My mother had quite a few of the old sad-irons (as they are called) because she was a bottle digger and amateur archaeological excavator of garbage middens and 1900s-vintage homesites. She also had several of the iron-shaped cast iron trivets.

We had and used a LOT of cast iron in our cabin, virtually all of it more than sixty years old and refurbished after sitting in the moss and soil for many decades. Mom didn't use the sad-irons very much (the lifestyle didn't call for a lot of ironing) but I do recall her heating them up for a variety of dress-making projects (she had a formerly-electric Singer sewing machine with zig-zag stitching that my dad frankensteined into the body of an antique treadle Singer).

My memory -- which could be wrong -- is that she seasoned them the same way she seasoned all of her other refurbished cast iron. She'd use (or have her children use) steel wool to remove the gross rust, and then she'd slather or soak the cast iron in Wesson oil (a brand of food vegetable oil) and cook it in a hot oven for a few hours. Then she'd perch it somewhere on a hot stovetop (we had two wood stoves going full blast most of the time) for hours or days longer to let the seasoning set up.

The thing about good seasoning on cast iron is that it's smooth but not oily. There isn't actually any oil present. The vegetable oil coats and clings to the rough pores in the cast iron, and then when heated, it cooks into a sort of lacquer or shellac that is more like a hard plastic than a grease. It's this hard coating that makes cast iron pans so non-stick, and you can wash any remaining oil off of it quite safely with warm soapy water as long as you don't chip it, scrub at it with a fork or a hard scouring pad, or soak it for too long. (Warm water, with or without soap, will eventually soften it or even dissolve it; but it's pretty eventual; you can boil beans in a well-seasoned dutch oven without harming the seasoning.)

So my mom had these seasoned sadirons that had used to be really rusty until she refurbed them to get the rust off and a layer of seasoning on. Then she just kept them on the floor under her sewing machine, where they never got any sort of complex dirt on them. Before using them, she'd just rinse them in warm soapy water (or rub them with her ubiquitous washcloth, which amounts to the same thing) to get the dust off, and then throw them on the stove to start heating up. I remember her burning fabric with them accidentally, but I don't recall her ever complaining about the seasoning rubbing off. I do think she typically used a layer of moist protective cloth over the layer she was actually trying to iron, but I think that was to provide steam and protection from scorching.

posted 5 years ago
I just wanted to thank you all for your insights! I just got back from fishing, shrimping, and crabbing on the Coast, so my reply is a bit belated, but I really appreciate you all sharing your knowledge. I will try to get around to restoring these babies pretty soon, and report how it goes.

posted 5 years ago
Tailors around here use those, as electricity is very irregular. They tend to use a smoky sooty kerosene stove, with a chapati pan or piece of thick sheet metal on top of the flame, and then the iron on top of that. The irons are pretty heavy and they seem to leave them on low all day, and the whole body is probably hot. I have no idea whether they are seasoned or have a steel shoe, or what.