posted 5 years ago
I'm looking forward to implementing grey water systems soon. I have a piece of land that I plan to develop a homestead on from scratch.
However, there's been a lot of trash littering the place for decades - discarded oil bottles, gas cans, old tires, etc.... a terrible mess to clean up!
What's really concerning is that I noticed that the water coming out of the ground in places(especially down hill) is contaminated with what looks to be oil. As of now, I placed a bunch of hay in those areas in hope that it'll help lock up some contamination.

Could a grey water system be used to help decontaminate a landscape?

posted 5 years ago
I should mention my theory of how water might be used to help flush decontaminates:

The 'oil looking' substance I seen in the water made itself visible to me after I put in some micro-swales up hill(which I have constantly supplied with clean gravity feed water).
the majority of the trash was above the micro-swales.
It's my understanding that swales sink in water and eventually show up as surface water downhill(which is what is happening in my case).

My theory is that all this underground water movement is flushing the contamination through my landscape and
hopefully once all the trash is removed, the ground water will eventually purge out the residual contamination - along with the help of mushrooms in mulch perhaps.

Does this sound reasonable?

I would like to weigh in on your post. I have worked in the environmental remediation field for over a decade and I hold a license as an environmental professional, so I have considerable applied knowledge in this field. Based on the information you provided, you must consider the real possibility of petroleum contaminated groundwater at your site. Petroleum in groundwater will very slowly degrade over time IF the source material has been removed. You mentioned cleaning up trash consisting of oil bottles and gas cans. Did you see oily soil when you cleaned the trash? Contaminated soil can serve as a pollutant source to groundwater for decades if the soil is not cleaned up. Unfortunately, if you do have a petroleum groundwater plume, I doubt that surface greywater installations will have much of an effect on cleaning deeper groundwater for several reasons: 1) mycelia probably won't extend into deeper, saturated soils where the groundwater plume resides, 2) the greywater installations (if effective at remediating petroleum) probably don't encompass enough area to address the underlying plume, and 3) your subsurface conditions may or may not support adequate biota to make any difference (oxygen, nutrients, etc).

Do you have any historical knowledge of your property that could shine some light on the potential for contamination? Any pre-cleanup photos you can share? Is it near urban or industrial areas? Do you plan on utilizing the groundwater for drinking water? My concern is that the contamination is beyond the scale of home remedy. Gasoline poses a special risk in that the benzene component is highly toxic to children at low concentrations in drinking water. I don't mean to sound alarmist but I have repeatedly seen on this forum the idea that applying untested permaculture remedies (peeing on stuff, throwing down biochar, etc) can address industrial contamination issues that can pose real human health risks.
allen lumley
pollinator
Posts: 4154
Location: Northern New York Zone4-5 the OUTER 'RONDACs percip 36''
61
I like...

posted 5 years ago
Jason Vath : I did a quick google search and really liked Two articles from wikipedia . Links below :

Like you I favor Mycoremediation . However I seriously wonder about the past history of your site!

By-law to divulge any hazardous conditions Three big ones would be 1) A fuel oil tank leak, 2) Mold or dry rot, and

3) any commercial use like an Auto Parts Store or Hardware business retail or wholesale ! (dry cleaners dumped a lot of

chemicals out their back door for decades )

If this was not reveled to you you may have recourse through the courts . This will involve lawyers !

A good source of local information would be the Town/County historian, these people have a gift of gab and a feeling of

self importance, as long as you are willing to listen you CAN NOT impose on them ! Good Luck, Good Hunting, for the

Good of the crafts ! Big AL

Leora Laforge
pollinator
Posts: 154
Location: Saskatchewan
38
posted 5 years ago
Jason, do you have objections to trees? i don't have a link but there was a study done sometime ago where poplar trees where used contain and clean up an old gas station site. There was a leaking underground tank, poplars were planted around it and down hill, after six years significantly less chemicals were found in the groundwater.
Jason Vath
pollinator
Posts: 227
Location: Hardiness Zone 5
80
I like...

As far as I know, the land was once farm land ~20-30 years ago. Since then it has just been property which the forest encroached in on quite a bit.
There was never any industry or business near by. The area is fairly secluded, a few neighbors and a lot of woods.
Honestly I don't feel there's any major contamination, I just don't like the idea of any toxins period. All the oil bottles, gas & tires I've seen have been relocated down hill and will need to figure out the best way to dispose of them - burn them(not the tires) in a large rocket stove ? Tires can be donated to someone(possibly me) interested in earthship construction.

pics of the trash in the midst of cleaning up: 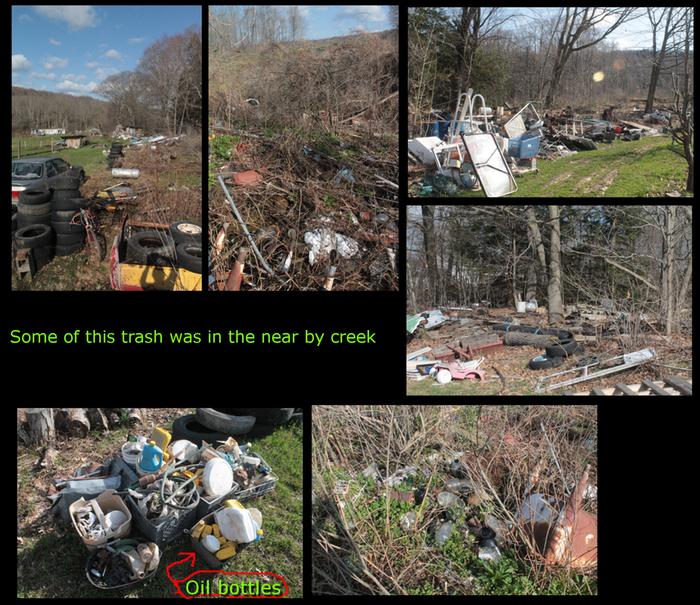 posted 5 years ago
Leora,
Interesting you mention Poplar trees, I noticed last year that some started growing on the property as volunteers. Perhaps nature is working with me to help rid the place of trash.
I don't object at all to planting trees if it'll help. Eventually a food forest is what I'd like anyways.

Allen,
Thanks for the links, I will look into them.

I'm guessing in a few years, there will be no problem. That's just my instinct.

I just noticed this.

What's really concerning is that I noticed that the water coming out of the ground in places(especially down hill) is contaminated with what looks to be oil. As of now, I placed a bunch of hay in those areas in hope that it'll help lock up some contamination.

Are you actually sure that you have oil ? In situations with a downhill seep you may have a film of bacteria metabolising organic compounds in the water using dissolved bivalent iron or FeII+ into FeIII+ The result is a film of bacteria on top of the water that looks very similar to oil but has not the typical oil scent. Since you have constructed swales you might be flushing iron (and manganese, ....) out of your soil.

If you have no oil scent there is a good chance that you don't have oil.


There is a possible complication. Sometimes the bacteria use dissolved oil to metabolise. Mostly they 'eat' humic acids and such. If the bacteria live in a stable environment you might form swamp iron ore.

See for starters - https://en.wikipedia.org/wiki/Iron_bacteria I quote from that text 'It is sometimes possible to see a rainbow colored, oil-like sheen on the water.'

In my part of the world you can discern genuine oil from bacterial film by crossing a stick trough it. If oil - your disturbance of the film closes up. If bacterial film then the surfacefilm remains 'broken' as if it's miniature ice floe.

The only way to be sure is by chemical analyses. Use a gas chromatography (GC-MC) method on a florisil cleaned sample to determine presence of oil. IR-methods can give you a false positive. The GC-MC-methods give less chance of a false positive but they also indicate in a small way what kind of mineral oil product you are dealing with.

I have cleaned up sites like yours. While a lot of shit might have been dumped - chances are good that you have nothing worse than localised oil, some ashes (with PAH, oil, PCB's, etc...). Oil products that are of most concern are gasolinelike, light mineral oils as they can spread easily and DNAPl's used in deagreasing metal surfaces.


If you clean up - don't burn it. If you burn stuff - especially plastics and such - you actually make dioxine- and pcb-like substances. You also break down paints based on heavy metal pigments. Making the heavy metals available for biologic uptake - you are the future top of the local food chain !!!

posted 4 years ago
Thanks for the link, my water looked nothing that bad, in fact it seems to be gone as far as I can tell.
I'm fairly confidant that no major damage was done. Luckily none of this trash is in areas I'm growing in.
Most of the trash is consolidated and being put into heavy-duty trash bags. The land is starting to look like land again!
I've literally been working all winter clearing this disaster up.