Ed Sitko
Posts: 52
Location: Bitterroot
posted 5 years ago
We are re-habbing an old house that will include replacing all of the old leaky windows. We're considering bids from several of the majors: Pella, Marvin, Anderson, Sierra Pacific. One common theme among all these players is that they all use Cardinal glass. We're debating where to use Cardinal's Low-e 270 and Low-e 366.

The house is rectangular and oriented east-west on the long axis. The house was literally picked up and set back down on a slight (a few degrees) bias to the northeast, relative to the summer sun travel. The intent of this orientation was to optimize winter passive solar gain.

btw: There were many factors that necessitated lifting the house. We didn't do it just to change the orientation

We're placing the bedrooms on the northern half of the house. Cooking and living areas are on the southern half. We're in south-western Montana.

We're thinking of using Cardinal Low-e 366 all around the house. It's not much more expensive than the Low-e 270. The thinking is that the 366 will solve a lot of the summer heat problems on the western exposure and be a good general performer for the colder months.

The dilemma comes in on which glass to use on the southern exposure. We are trying to reconcile the desire for passive solar gain in the winter (ie Low-e 270) with the desire to retain heat on those cold winter nights (ie Low-e 366.) The Cardinal literature is largely silent (or perhaps I'm just not understanding it) on the differences in these glass types relative to our objectives.

Any thoughts on how we might reconcile these competing needs?
allen lumley
pollinator
Posts: 4154
Location: Northern New York Zone4-5 the OUTER 'RONDACs percip 36''
61
I like...

posted 5 years ago
Ed Sitko : Not an answer specific to your glass question, just simply a different direction to look at your solar gain situation ! Investigating the use of

custom drapes can be a major reduction in heat lost and gain though the glass due to Anabatic and Katabatic Air flows across the glass surface !

during your 'heating season.

During the summer with the sun high in the sky much less solar gain occurs until close to sunset when the sun is again lower in the sky. With a well

thought out layout the Thermal mass at Mid-summer gets very little solar gain and can even be a source of Coolth !

For the Good of the Crafts ! Big AL

That still leaves the question of glass selection on the south face.

Terry Ruth
Posts: 698
26
posted 5 years ago
The best thing to do is download BE-OPT from the Department Of Energy and your climate file, its free. Design your building and orientation in it and run some different comparison simulations to determine the best cost of performance. There is also shading, solar gains and losses, PV and other passive designs, etc, inputs to compare to windows, doors, insulation, PV, etc. There is also an "optimization" mode. Manual J and IECC are also in the software. It can also run reno or new construction modes. Watch the training videos its fairly simple and accurate. DOE and NREL have refined it to our climates. Otherwise it is too difficult to guess.


I'm waiting for Marvin U-values, SHGC, quotes you find on the NFRC label to load the model. There is also a new smart window tech with "Thermocromic" auto solar shading no need to spend alot of xtra money on it nor worry too much about the winter_summer gains and losses.

posted 5 years ago
Terry Roth : Thank you, Two great pieces of information, both worth an apple apiece ! I am finding the material a thing to be studied when life is not 'crowding in

and giving you the Elbow'. Can you add a little information on how to navigate through this material ? Thank you Big AL

Terry Ruth
Posts: 698
26
posted 5 years ago
Big AL, I started with the training videos under support, and they have a forum and you can call or email them. They take you right through a simple simulation. Then I took a simple house and ran the simulation b4 getting more complicated. It works with Windows 8-10. I'm still getting better at it myself. DOE and NREL are funded to help us lower home carbon footprints.

The other big thing that is going to sweep the nation and has started is all the big American manufactures like Marvin etc, are going to start offering triple panes outside of cold climates at a reasonable cost. In Germany it is code everywhere in every climate zone I read and I'm thinking American mfgs are tired of smart peeps going to Germany for tri-panes with lower u-values in the single digits or low teens at the same cost as doubles here in the US. Germany has a slightly different rating system and design, there is ALOT to it to compare. The most energy efficient design is the casements since the latch air seals best.

I'm waiting to see what Marvin comes up with then shop it over to Germany since I want tri-panes in the mid-west. It really boils down to low u-values as low as we can get it hot or cold the delta T matters. PV at its low cost these days will win over passive solar gains to mass but that depends on alot of variables the model accounts for and compares cost of performance.

As far as Thermocromic I'm waiting to hear if Marvin wants to add it to mine and at what cost. If not I'll get a quote from Raven. That technology adjust short solar wave gains based on intensity while maintaining a high VT (Visual Light Transmission). If it cost too much still I'll add it to south and west facing only. I'll put PF canopy's over some of those windows too.

Ed Sitko
Posts: 52
Location: Bitterroot
posted 5 years ago
Thanks Terry I'll take a look at that software. My fear tho is that after 80 hours or more of diddling with that package I'll find that the answer is 42, the Answer to the Ultimate Question of Life

(see Hitchhikers Guide to the Galaxy)

I'm not aware of any America window manufacturer that doesn't use Cardinal glass. That of course includes Marvin. Perhaps you can find the technical data you need here -> http://www.cardinalcorp.com/wp-content/uploads/pdf/Technical_Glass_Guide_Web.pdf .

Or to approach your problem another way, try plugging in various combinations of glass attributes from the tech glass guide. Use the software to derive the optimum combination for you, then tell Marvin to put THAT Cardinal glass in your windows. Would that work for you?

posted 5 years ago
I don't know how to determine what windows to go with for passive solar. I do have friends who built a passive solar house in central New Hampshire. They had me make Warm Window roman shades for all the windows on the south side of the house. The have magnets in the edges of the shades and magnets on the window frame. In winter they close the shades every night to keep the heat in and open them in the morning to let the sun warm the house. They close them on the hottest days in the summer to keep the house cool. The house uses about 2 cords of wood a year to heat the 1300 sq ft house.

Here are the shades I made for their living room. 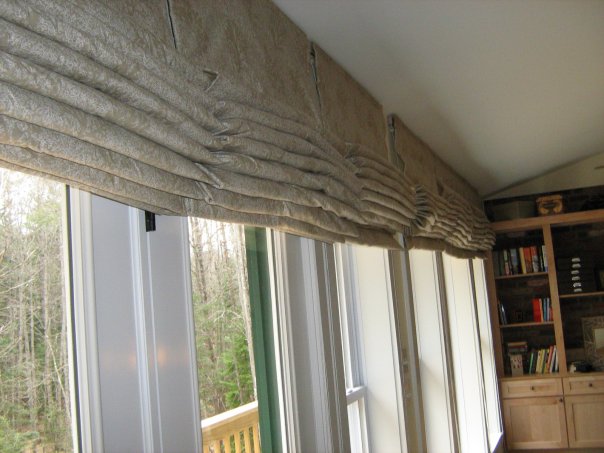 Terry Ruth
Posts: 698
26
posted 5 years ago
Ed, It is cost prohibitive to design a custom window so I start with off the shelves. That glass guide is informative I'm still reading it. I have always heard Cardinal makes a good solar facing clear glass with a high SHGC of 78 I had not looked at yet but you'd have to live in Alaska to not overheat in summers. From what I gather 270 and 366 have about the same winter .20 u-values in figure 17-1 but differ in SHGC by 9 in 18-1. Depending on you're goals, mass, HVAC zoning, shading, etc, will determine the choice. I don't think double pane 9 SHGC is going to produce alot of summer HVAC load drops unless your in a climate with large diurnal swings so I would not spend alot of money on it. If you look at triple panes there are significant gains at the expense of VT.

BTW: They are working on thermochromic tech called "click" release in 2016.

Ben Hart
Posts: 6
posted 4 years ago
We recently built a passive solar home in New York.  We found that the easiest way to get around your problem was to get windows off of Craigslist, make sure we had a minimum of 10% of southern-exposed glazing to square-footage ratio (so for a 100 square foot house, you'd need a minimum of 10 square feet of southern-oriented windows), and most importantly, we had our roof line extend so as to cut us off from summer sun.  The idea is that as the sun increases its angle through the summer, the roof line will cut off the direct sunlight into the windows and it will increase as it the angle decreases in the winter.  I'm attaching a photo of the east elevation during construction.  You'll see that the south-facing roof line is longer than the North-facing roof line.  This is an elegant solution that just requires a little calculating to get the exact length of the overhang portion correct.  So it really doesn't matter what windows you use, and the more UV they let in, the better since you'll never be getting summer sun into the house anyway.
IMG_20151108_120852.jpg 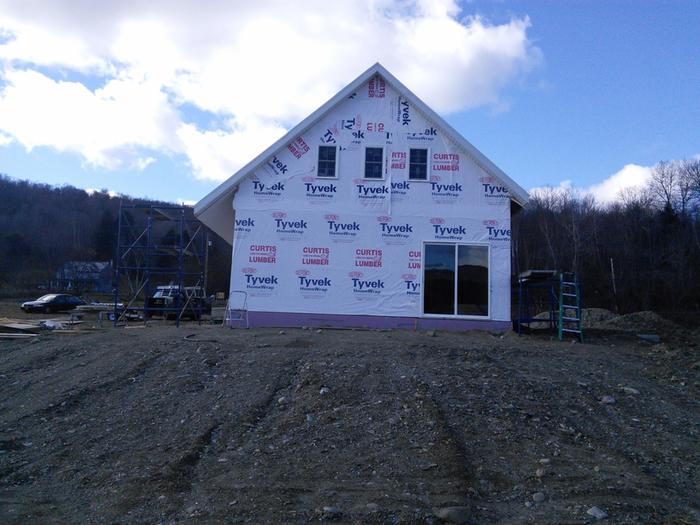 Roy Hinkley
pollinator
Posts: 350
Location: S. Ontario Canada
26
posted 4 years ago
I've given this much thought over the years. Regardless of the season (sun angle) you want to gather as much heat as possible except when the outdoor temperature that particular day will be uncomfortably hot. Sometimes you want that extra sun shining in to gather heat  or to help your plants start or you just want lots of heat in the spring to open up all the windows for that fresh spring air.
If you put sun blockers inside of the windows much of the heat is already inside, you need to block it outside though they're still great at night to slow heat loss .

Some kind of easily adjustable awning over the windows that you can move to block or allow sun based on the needs of today, not the month it happens to be. Might even be able to work in some of those automatic vent openers for greenhouses.....