posted 5 years ago
Since infomation on duck egg colors seems to be really hard to find (i.e. I couldn't even find it last time I did a google search; I had to search through my old bookmarks), I thought I'd share this webpage: http://www.runnerduck.net/egg-colours.php.

They talk about the black eggs, as well as blue/green and white eggs, and the genetics behind the blue/green versus white eggs. Here's one quote


The colour is laid down in the thick, calcium-rich testa of the shell. The pattern tends to be in the cuticle, the outer protective layer. It is only in the later stages of the egg’s passage along the oviduct that the markings are applied by pigment-secreting areas of the uterus. I imagine a sort of spiral production line with little paint guns firing at given intervals. If the production line is quite fast there will be streaks or elongated marks. If it is slow, there may be round spots or even bands.

And, a pretty picture showing some of the different colors: 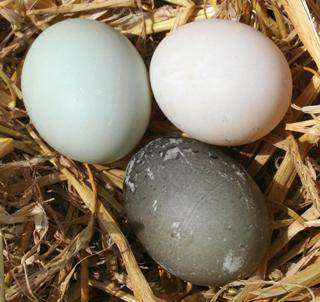 If you have any more info about duck egg colors and what causes what, such as what causes the brown or black "bloom" (is that the right word?) on the egg shell, please share!

posted 4 years ago
I'm really glad I posted this, because a week ago one of my ducks went broody and I added four eggs from my green-egg-laying duck (either an ancona, or an ancona/mallard mix), in hopes of getting more green egg-laying ducks. But, I didn't know if the blue egg gene was dominant or recessive, so I did a google search, and found this thread I started. Thanks google, and thanks permies for being a place I can store my research.

I did a little more research and found some other interesting articles. This study (https://www.ajas.info/upload/pdf/23-22.pdf) was done to find out what caused the eggs to be colored blue. Interestingly enough, it's a chemical called biliverdin  that is excreted in the uterine fluid to color the egg, rather than by the shell gland (like the black and brown color that some fowl have coating their eggs, which can be scrubbed off). They actually injected some white-egg-laying ducks with the chemical, and the ducks started laying blue eggs!


Our study demonstrated that the different eggshell colors in BSD [Blue-Shelled Ducks] and WSD [White-Shelled Ducks] were influenced by the amount of biliverdin in the uterus fluid and not determined by the amount of biliverdin in the shell gland. The eggshell pigment depository pattern in BSD tended to increase layer by layer and was different from that in BrSH [Brown Shelled Hens], showing a pigment concentration peak in the top eggshell layer

And, this study (https://www.cabdirect.org/cabdirect/abstract/20163364551) shows that the blue-egg-laying trait is a dominate one. So, if my duck's lay white eggs, their offspring will lay white eggs (unless the drake carries the trait for blue eggs). BUT, if you've got blue eggs, you've got a 50-100% chance of getting blue-egg-laying progeny. (50% if the mother carries the white egg trait and the male only has traits for white eggs. 75% if the male carries both the blue trait and the white trait. And 100% if the mother doesn't carry the white-egg-laying trait).

So, knowing my drake has produced only white-egg-laying progeny (and none of his sisters laid blue eggs), I can assume he doesn't have the white trait. Since I don't know if my green-egg layer carries the white trait, there's either a 100% chance of her producing green-egg layers, or a 50% chance. So, I'll just call it a 75% chance--and with four eggs, three of the ducks might carry the blue trait. Of course, if they're all drakes, it won't do me much good! So, I'll probably get like one or two green-egg layers, all odds considered.

I also find it odd that my green-egg-layer also often has a brown coating to her eggs, especially if she hasn't laid for a while. I hear people talking about this coating when referencing chicken eggs, as well as a black coating of Cayuga ducks. But, I've noticed that my ducks also have this coating, as well. I have Anconas and Golden 300s and they all get a slight brown coating when they haven't laid for a while, but my green-egg-layer has a much darker tint to her eggs, especially her first eggs of the season (they look dark forest green!).

Attached is a picture of eggs from our ducks, from left to right: Big "Ancona" (the duck was pure white), my epic green layer (the first egg she made when we got her), an egg from a duck that hadn't laid for a while, a green egg from a blue runner duck (notice how much paler it is than my epic green-layer's eggs), and then another duck egg.
Duck-Eggs-Colors.jpg
Layer-of-Epic-Eggs.jpg
Green-Egg.jpg