posted 7 years ago
It all sounds sooo complicated. Hate word problems. I am a visual person. Is there a simple way to make a small rocket stove? I have seen plans for small ones out of 6 concrete blocks or a bunch of bricks. These are for temporay stoves. My house, age and lifestyle is not conducive to a regulare rocket mass. But, I would like a small one that could work to ccok food - if need be.

Also, is there a way to convert an existing fireplace - with fire brick- into a rocket mass?

posted 7 years ago
Need to add to previous post.
My fireplace is masonary and surrounded on three sides with brick, sorta free standing. Also has a double masonry flue. One wall has fireplace, 2 walls are free standing brick. The other side is a outside wall. Seems to me that it has alot of mass. And that with some adjustments of mass inside and a side flue opening and small front it could be converted. Do not have a clue how, but, when we have a fire going for awhile, it radiates heat through the 2 brick walls.

We rarely use the fireplace, hauling in wood etc is not easy for 70 year old bodies. A rocket mass would be so much easier. I can carry twigs!

Posts: 3958
Location: Upstate NY, zone 5
384
5
posted 7 years ago
There have been a number of conversions of fireplaces to RMH. Yours sounds much better suited than the average. With details of fireplace measurements, we could advise you on the best design for your situation.
https://permies.com/t/35977/rocket-stoves/build-mass-heater-space
https://permies.com/t/26794/rocket-stoves/Split-level-house-RMH-prospective

Posts: 3454
Location: Southern alps, on the French side of the french /italian border 5000ft elevation
180
posted 7 years ago
Yes it's doable, if your fireplace is against an inside wall, it's an ideal situation. If against an outside wall, you would need to insulate, to avoid loosing heat.

Post a few pictires, so we know what you have as a astarting point. And i'll try to walk you through.

posted 7 years ago
Here are two pictures. The outside wall is on the left of the fireplace in the first pic. As you can see it is sorta free standing. When we have a fire it heats the fireplace room and the dining area on the other side. There are vaulted ceilings and the heat gets somewhat to the kitchen. It is full masonary with fire brick. And has a double flue that goes to the basement.. We do not have a fireplace in the basement, but a opening for a woodstore connection.
This house is a 1950's mid century modern. We love it. We moved it here 30 years ago. Have replaced most of the windows and re-insulated the non vaulted side.
Not the best hunker down house. But, like to be sorta prepared.

Do you know how to attach pictures here?
Laura Johnson
Posts: 54
Location: Oklahoma, USA
11
I like...

posted 7 years ago
Evidently not! How do I post pictures.

Posts: 3958
Location: Upstate NY, zone 5
384
5
posted 7 years ago
Go to "Post Reply" and find the blue "Img" button at the top. You need to have the image hosted somewhere on the web already (like your blog, or photobucket). Enter the URL to the image in the popup box.

For photobucket, pinterest, and possibly others, you need the actual image location, not just the site view of it. Right click the image, select "properties" or "view image info" or however your browser says it, and copy the image location URL into the popup.


This post describes the process, but the forum no longer allows copying an image directly from your computer: https://permies.com/t/31696/tnk/posts-simple#246475


By the way, this discussion is moving away from "portable", so if it's alright with you, I will split it into its own thread.
Laura Johnson
Posts: 54
Location: Oklahoma, USA
11
I like...

posted 7 years ago
Photobucket rejected me! So, I posted the photos to one of my fledging and neglected blogs. Here is the url. I guess I have to leave it thwpere for awhile. It would be so easy to post pics from my computor!
It is difficult to be a non techie in a techie world. 😰 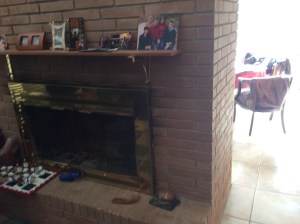 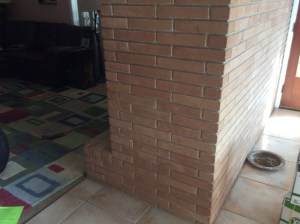 Laura - I fixed your images so they appear here. Glenn.

Posts: 3958
Location: Upstate NY, zone 5
384
5
posted 7 years ago
You have your own topic now, so we can concentrate on discussing it.

Your fireplace would be excellent for a conversion to RMH. The relatively small exposure on one end of the brick mass is not an issue, especially considering your location in Georgia. Seeing the aesthetic, you would probably want to continue with a brick facing rather than cob. I think it could be done without altering the existing masonry, except that the mantel over the fireplace would probably need to be removed if it is combustible.

The first thing if you want to do this is to take measurements of the fireplace and hearth, both interior and overall. How big is the flue inside, and how tall from the fireplace floor to top of chimney? Is the current draft strong, or do you have any problems with smoke puffing back in windy conditions?
John Elliott
pollinator
Posts: 2392
97
posted 7 years ago
Laura, I was in your position a couple years ago, trying to think of how to convert my fireplace without disturbing the aesthetics. How to make it unobtrusive and unnoticeable. But then I finally bit the bullet and built it out in front of the fireplace, using the chimney as the RMH exhaust.

I had a 55 gallon drum sitting on a pile of bricks in front of the fireplace for a couple of weeks, and it was just too big, too obtrusive to live with. So I went on a search for a smaller metal drum and finally ended up using an old meat smoker I found on Craigslist. It is probably about the same size as a standard 30 gallon drum. I put some concrete block and bricks out in front of the hearth to act as a foundation for the RMH which extend the hearth another 16" into the living room. Half of the RMH sits on the old hearth and half of it on this new foundation. I build my J-tube tunnel, set the smoker body on top, attached some ductwork out the back and up into the chimney, and gave it all a good coating of cob.

It works great. It does require feeding, but if I run it from late afternoon up until bedtime, it can warm up a lot of mass. I estimate I have maybe 500 pounds of brick and cob in this installation, and if that heats up to 100 or 120F, that's a lot of BTUs to dissipate into the house over the night. After last years heating season, I figured out that I saved about 1/3 on my heating bill by using it. Since we are both in Georgia, our home heating needs are probably pretty similar. You might be able to save 1/2 on your heating bill with a larger RMH built using a 55-gallon drum.

Is it an ugly addition that detracts from the sale value of my property? Maybe to other people, but I like it. I suppose if I had to, I could demolish it, but for now it is my living room conversation piece.

Looking at your pictures, what would really be nice is if you could snake the exhaust so that it heats up ALL the brickwork in your fireplace. That, unfortunately is much more of an engineering project than just running the exhaust up the existing chimney. I know I am capturing less heat that I could if I did that. Up on the roof, the smoke comes out at 100+ degrees F when the RMH is going all out, so yes, there is room for improvement. But you asked if you could convert your fireplace, and here in my second heating season, I can say "yes".
Satamax Antone
gardener

Posts: 3454
Location: Southern alps, on the French side of the french /italian border 5000ft elevation
180
posted 7 years ago
John Eliot, there's better ways than snaking the exhaust and barrels. Cooking plate as the radiator looks far better, and a bell works nicely instead of the old type of flue going through the mass. And it's nearly all already there.

posted 7 years ago
My very own topic! I am sure there are a lot of people that would also be interested in converting their fireplace to a more efficient heat source. I will take a bunch of measurements and post them.
Thanks Glenn for fixing my photos.

I need to get on the roof to get the chimney height and hopefully flue size. It is raining. So all this info will be coming t'mor. i hope

The draft is strong. No problems with smoke. Mantel removeable. And yes I would prefer brick.
Later

F Styles
Posts: 455
Location: climate zone 6b
3
posted 6 years ago
Laura, if that is indeed your kitchen or dining room in the room behind it you could very possibly do this design which i find attractive as all get out. 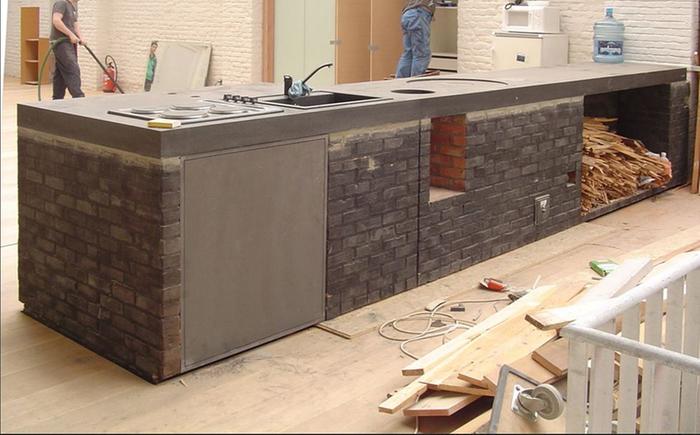 the plans give you a general idea of how its laid out and i would make a few modifications to those plans to fit your needs.

Posts: 3958
Location: Upstate NY, zone 5
384
5
posted 6 years ago
The hearth being only 12" deep makes this more complicated. There is not enough space for a bell or barrel in front of the fireplace without extending the hearth. What is the floor structure there? If it is a slab, it will be easy. If not, we need more information about the floor structure, where the joists are, what kind of basement there is, etc.

It might be possible to mount a raised firebrick floor on top of the hearth, supported by 20" long steel angles lag-bolted to the hearth or even better to the base of the brick wall. That would allow a layer of firebrick on edge next to the wall (to protect the existing brick surface), an air space for the bell, another layer of firebrick on edge, and facing bricks matching the existing wall. 2 1/2" + 11" + 2 1/2" + 4" = 20" total, with an 11" space, just barely enough for a heat riser of 6" inside, 10" outside diameter. Not optimal, but doable.

I would think you could have a bell (hollow brick box) maybe 6' wide, 6' tall above the hearth, and 20" deep as a minimum, containing a 6" J-tube core. Inside the fireplace, you would block the flue opening and put a 6" stovepipe through it extending to about 3" from the floor, so only gases that have given up all their heat and sunk to the floor would go up the chimney. This would use the existing mass quite effectively without more than cosmetic damage.