RMH for mountain hut: small - no barrel - outside air

Thanks everyone for making this site a great resource.

I just recently discovered the RMS and RMH system and love it. I'm waiting for the books to ship and delve into the matter, but I do have a few basic questions, that people might be able to answer from their own experience.

The biggest challenge over here in good ol' Europe (despite the Irish now having the first CE certified RMS in production: the EirEco) is the regulatory jungle and the fact that in some areas you will need the local chimney sweep to authorize the system. Now most of them e.g. in Germany - a cursory reading in a "Schornsteinfeger" forum suggests - are not familiar with the concept and would not give their "blessing" to an open fire place (which are forbidden nowadays - regardless of how the RMS works with the draft). They want to be on the safe side and they are naturally being very conservative, since a failure of a system they permitted might fall back on them with all ugly consequences.
So if I wanted to build a RMS chances are that I need to do some convincing. Consequently I'm trying to eliminate the main objections, I have read in their forums. Maybe you have some ideas as well.

First:
Some infos about my desired installation location (a clean dry rustico [a hut] in the italian alps):
Concrete/stone floor, two small rooms on top of each other (connected with stairs): together they measure about 2000 cubic feet. The walls are - currently without insulation - are 2 feet wide stone walls.
Only other heat source when the sun is shining: solar air collector facing south for ventilation and some nice bonus heat.

-Img does not work -

What I like about it:
It has a smaller metal radiator area compared to ones using a barrel (only the top of the tower for cooking). My rooms are so small that I fear that a barrel would make them too hot very quickly. I prefer the added mass around the secondary combustion area which could give off the heat slower. I have a lot of Grog laying around that could be incorporated as thermal mass.
Not using a barrel would also help with the first objection of a chimney sweep I read. The whole thing would look and feel more lake a masonry heater. With the barrel he might argue that over time (say in 10 years) the extreme heat would damage the material and waste it away. I could contradict him, but barely convince him, I fear.

Here another mod I think would increase my chances to get the "ok" from the chimney sweep: Outside air supply. With it, I could fill the hopper (which I would make a little taller as some folks have already done) and once the stove is fireing away I could close it with a glas stove stove door. That way it would prevent any harmful gas flowing back in the rarest and most unfortunate of circustances - which is the biggest concern of some chimney sweeps I read on the topic that are not familiar with the trusted working of a RMS: "but weather conditions might....". Naturally I can use a metal pipe for the outside air transport to avoid the potential fire hazard that was described in a fictitious case used in a thread about outside air in these forums.

What do people here think out this?
Anyone here with a barrel-less design?
What dimensions (mass) would people recommend for my application? Anyone have experience with small rooms? Using pipes for leading the gas inside the thermal mass to the unisolated stone chimney I'm stuck with 4.7 inch diametre (12 cm) which is what the exhaust pipe has.
And: Ci sono Italiani qui con una stufa a razzo?

posted 6 years ago
Inspiration Green does not want to share your French stove link - any chance you can find it elsewhere?

There are barrel-less designs. I had a correspondent recently from Canada who did the attached project, with inspector approval, based on the Vortex stove. It's not a rocket as such, but a smaller masonry heater/cooktop design.

Leslie Jackson brought back some pictures from Danish experiments, using old stove parts and no visible barrels (doors, concentric-ring pot supports where you can set the pot directly into the flame, or on top of the iron rings for more cooking options).

I posed some pictures of Lasse's Sidewinder from the latest Innovator Gathering on our blog, and they will be in our forthcoming book, along with the dimension tables for Peter van den Berg's batch boxes.
http://www.ernieanderica.blogspot.com/2015/10/pyronauts-in-montana.html 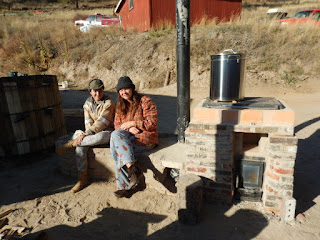 There are a lot of stoves of this kind, which are something between a tiny masonry heater and what I know as a rocket.
They will in my opinion require greater discipline to burn clean - you must not load fuel so it blocks the air intake, or the slot-like "port" at the back or side of the firebox - and their resemblance to a simple box stove could encourage a lack of care in this respect. And the cooktop and metal door represent a few hundred extra dollars of parts costs, not to mention the tools to cut bricks, or embodied energy and skill to cast refractory fireboxes.

J-tubes make a person learn a new way to burn a fire, and require fewer expensive parts to complete the installation. But the barrel is a definite public-relations issue, especially after so many bad barrel stove designs that burn out in 3-4 years with catastrophic failure. I agree that the expert chimney sweep may not like the barrel, regardless of anecdotal reports of their lasting 20-25+ years (I have not yet known any barrel failures with this design; even one barrel that had a roof dropped on it has been successfully re-mortared back into use).

I think for the DIY, iconoclastic backwoods builders, the exposed barrel is part of a "post-petroleum," almost steampunk aesthetic that we can take pride in. But it is definitely not mainstream aesthetics yet. 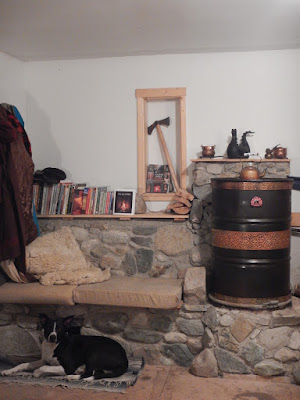 Johannes Schwarz
Posts: 19
Location: Italian Alps, USDA 7
5
posted 6 years ago
Thanks Erica for your suggestions. Most of the day I was fascinated by the vortex stove. That might be an option. The other thing I had been thinking about is the following:

I told Peter about this design over at the Donkey - judgement pending. But I'm sure some of you have suggestions as well.

Please no-one laugh. I'm no artist with my pointing tool and probably don't know what I'm talking about, but here is my "design" based on what I've read (batch + bell + a little dragon + a little walker). Input is welcome and advice on measurements much appreciated.
If disillusionment is the only way to cure me, then please do not spare me and beat the nonsense out of me.


From what I understand the exhaust pipe diameter is (since I'm not free to chose it in my case) an important factor when calculating the rest of the contraption. Well, I have a standard 12 cm (about 4,7 inch) pipe inlet into the chimney (which is made from brick, not insolated and about 5 meters (16 feet) to the top from where the stove pipe meets it. Total length from the ground up is about 6.5 meters and this heater would be the only thing plugged into it.

*What do you think of my "flatbread oven" (a little central asia in 'da house'). This is what a chamotte pipe would look like: 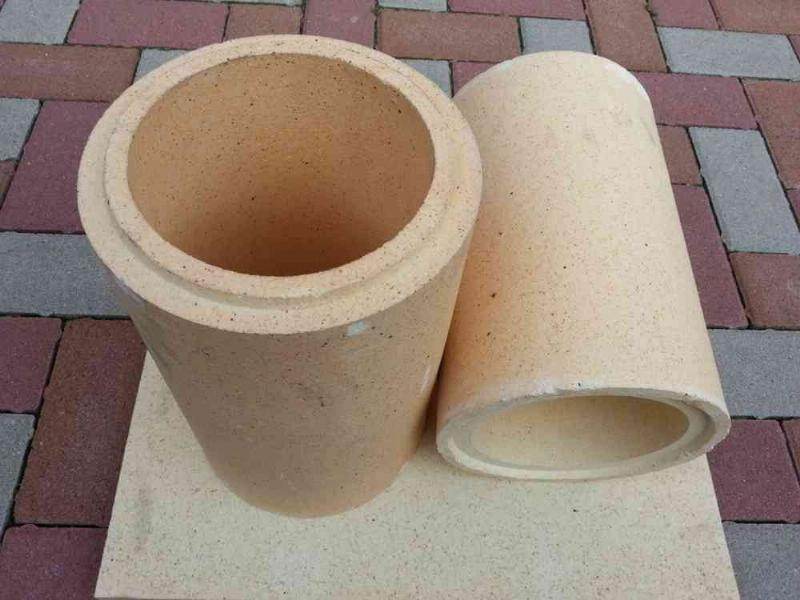 They come in various sizes - even 12 cm for a heat riser (to be insulated on the outside obviously). Since chamotte retains heat the updraft would help towards the end of the fire, I imagine.


About the dimensions I'm open to suggestions. As I said I have two rooms on top of each other with 13 m² each (about 140 sf each) and a volume of a little over 2000 cubic feet (about 60 m³)
All sides feature 60 cm (2 feet) stone walls currently without insulation. I would put insulation on the inside (wood + wood fibre) if I have to but if the rocket stove output would keep things temperate then I could avoid insulation because it would come at the price of condensation between the stone walls and the wood (which is always better to avoid obviously, rather than trying to dry it out with my solar air collector in the course of a season).

What if I had too much heat? I would channel it to my "out house/bathroom" which is build on one outside wall and otherwise has only minimal spot heating when I take a shower (you gotta be tough).

I'm excited about this, but do not spare my feelings.

Johannes Schwarz
Posts: 19
Location: Italian Alps, USDA 7
5
posted 6 years ago
Ok, it took me a while but I have realized my build using a variation of the RMH called Vortex Stove (More about the thing here: http://donkey32.proboards.com/thread/703/vortex-stove?page=1)
Here is a short clip about the process:


Thanks for everyone in this Forum to share with and inspire others. It was a great help for me, so again, Thank you!

Thanks for sharing this with us all.
Satamax Antone
gardener

Posts: 3454
Location: Southern alps, on the French side of the french /italian border 5000ft elevation
180
posted 6 years ago
Jo, that's the gravere that we can see in the distance no?

how's the western side doing? Did you finish your huge RMH?

If you mean the sequence towards the beginning (and the very last frames), this is the SE view from my house down the Val d'Angrogna towards the Po plain with the Rocca Cavour in the center.

Posts: 3454
Location: Southern alps, on the French side of the french /italian border 5000ft elevation
180
posted 6 years ago
Hey Johanes.

Ok, Cavour, so further south from the hills of Gravere.

I thought your were closer to those hills. Looks pretty much like it tho, in the distance

My workshop heater has been finished a while. I don't plan to plaster it. I might do few changes this autumn, before i re light it. Make a bigger metal top for the firebox. May be a top loading. And brick the air entrained concrete side which is collapsing.

I especially like the cast refractory pieces you made for the firebox.  When joined with refractory cement they should last a long, long time.