Timothy Loraditch
Posts: 4
1
posted 2 years ago
I currently have an older but efficient wood stove to supplement our natural gas heat stove and electric baseboard heat systems. We are not ready for a Rocket mass heater right now.  However; has anyone experimented with adding the barrel burn chamber on top of an existing wood stove?  The idea would be to use the wood stove as is but increase burning efficiency using the same flue, making it a low impact rocket stove heater.  Currently, the flue exits the ceiling via a metal-bestos chimney.
thomas rubino
Rocket Scientist

posted 2 years ago
Hi Timothy;  Welcome to Permies!
If I understand you correctly, you want to set a barrel on top of your wood stove ? And then ?  A riser in the barrel ?  And an exit near the bottom ?? Which would then exit through your existing chimney ?  Or are you thinking of just adding a barrel as a part of your chimney ?

In either case I can't see it being "rockety".
Without a mass or a bell, if you run your stove wide open to reach rocket temps , your home will be to hot and you would be losing large quantity's of heat up the chimney.
Did you have a different idea ?


If you are not ready to build a rmh. I suggest possibly adding mass around your existing stove , brick comes to mind or stackable stones. Those same pieces could be incorporated into your RMH later.

Timothy Loraditch
Posts: 4
1
posted 2 years ago
Thomas, you are correct in your understanding of my question.  Stepping back just a bit I spent the winter as I often do, staring at my wood stove and thinking about the heat going out the chimney.  I kept thinking about how to recover some of that heat before it leaves.  The addition of an additional compartment between the stove and the flue seemed like it would help.  I am not trying to create a rocket stove heater, just make what I have more efficient. Since I don't consider myself the sharpest knife in the drawer, I guessed someone here has already had the idea and tried it.

If that second chamber had more baffles and mass will that help?
thomas rubino
Rocket Scientist

posted 2 years ago
Hi Tim;  The problem I foresee would be creosote and or ash buildup in your second chamber.

The best way I have seen to recover some of your chimney heat is, the old metal box filled with open tubes and a blower pushing hot air thru the open pipes into your home. I have also seen a 55 gal barrel with the center 10" cut out top and bottom and an open tube welded in, same fan pushing the hot air about.


The different thing about a RMH is the freaky hot temps developed in the riser.  95-98% of all the nasty particulate's are burned up...  no creosote !!!  very little ash. That is what allows us to push 50' horizontal with an 8" system.

posted 2 years ago
Timothy,   You said " I am not trying to create a rocket stove heater, just make what I have more efficient."

A few things come to mind....
There is a heat reclaimer that you can install on your chimney:

I'm sure there is more just all I can think of at the moment...

If you did want to go a large step further and still wanted to use you wood stove, here are a few links I have found where people have taken a wood stove and converted it into a batch rocket:

posted 2 years ago
Have you considered this option? 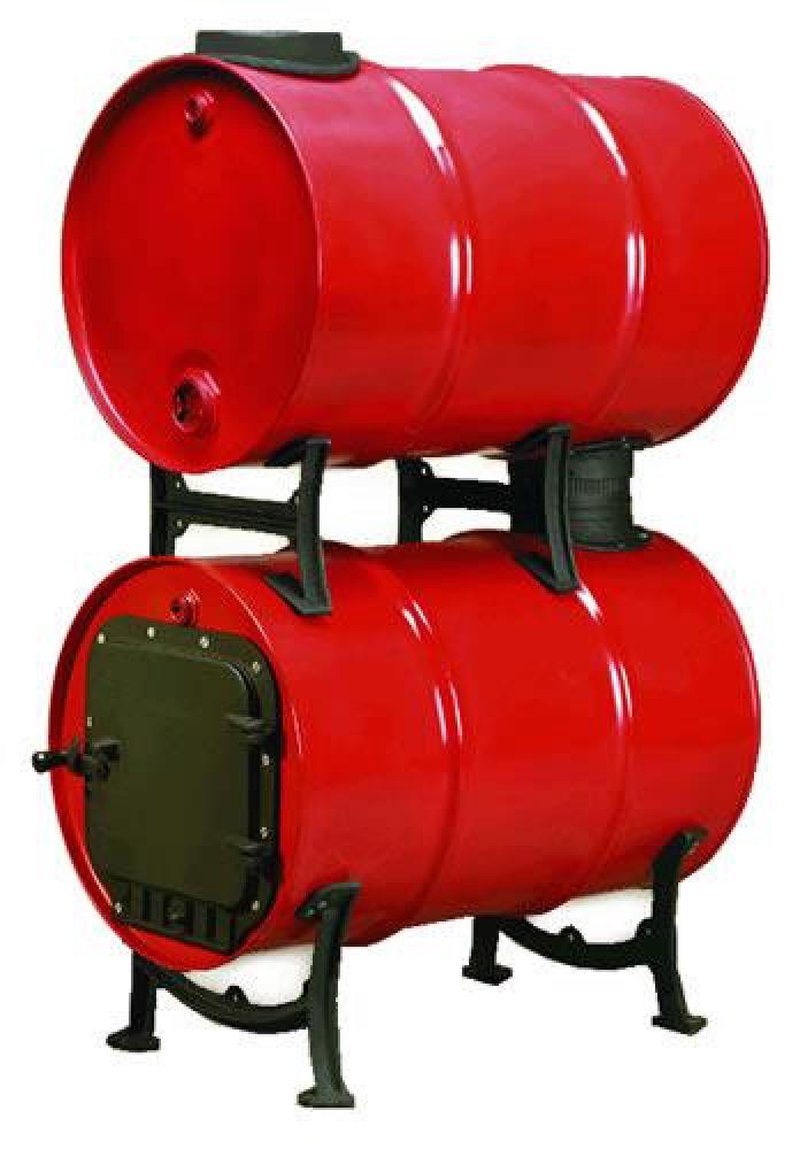 I think you could buy the kit normally used to add a second barrel to a barrel stove. Note the legs are designed to stand on another barrel, (round) and may need modified to stand on a flat wood stove. It radiates some of the wasted exhaust heat into the house.

I think if you could extend the stove to barrel pipe up near the top of the barrel, and the (barrel to) chimney pipe down near the bottom of the barrel, it would become a stratification chamber. I also think you could stack up multiple barrels to reclaim more heat.

The potential downsides I can see are:
1) Each barrel added will cool your exhaust a bit. Add enough, and at some point you won't have enough draw to pump the exhaust outside reliably.
2) A rocket mass heater working properly burns hot enough to consume things like creosote and tar. A wood stove isn't made to do that. So that stuff will leave your stove in the exhaust. The crazy amount of waste heat going up the chimney probably pushes most of it outside, preventing it from becoming a fire hazard. Cooling the exhaust, and letting it slow down by going through different sized chambers, sending it around turns and running it along curved surfaces that might cause pressure differentials seems like a recipe to deposit those things into the barrel(s). To be comfortable with the plan, I'd want to know what kind of fire hazard that stuff poses, my options for getting it out of the system, and what to do with it once I had it out.

Timothy Loraditch
Posts: 4
1
posted 2 years ago
Thanks for the direction.  I started reading THE BOOK and understand a little bit more the issue.  The batch system might be a little more my speed.  I have a wood frame house that will need additional support.  Also on the Permie/Bezos scale, I am more of a moderate leaning to permie so I need something a little more formal looking.  I understand many of the designs I saw are test versions but to get this in the door I will need to work on aesthetics to fit in the more suburban southern New Hampshire style.  It's not just an aesthetic issue but a real estate resale issue as well. Are there any New Hampshire members out here with an RMH I can visit?  I did not see a way to search for that.

Is that Permie/Bezos scale really a thing?  If not it should be.
Nick Kendall
Posts: 5
posted 2 years ago
This is the same type of thing I am very interested it  maybe someone has some pics or experience trying this
Have do you have a heater to start with?
Graham Chiu
pollinator
Posts: 633
Location: Wellington, New Zealand
15
posted 2 years ago
Grabbing heat from the chimney with an older style fireplace could be problematic as you are cooling an exhaust stream that contains flammable pollutants that could settle and coat the chimney.

How about first increasing the fire efficiency with a rocket retrofit? I've seen things that purport to do this.
Jeremy Baker
pollinator
Posts: 468
Location: Nomadic
39
posted 2 years ago
I placed a small 15 gallon metal barrel heat exchanger horizontally in the flue above my sheepherder stove. The flue gas swirls around inside then out the shed wall then up the vertical chimney. I don’t go down just horizontal. It’s somewhat similar to the double barrel stove pictured in this thread but smaller and a modified sheepherder stove underneath ( I can cook on it). The 15 gallon barrel heat exchanger has a clamp on metal lid so I can look inside and clean it. It emits a surprising amount of heat (too much then not enough). It is no rocket stove which produce nice steady heat. There is a hot air collection hood over the 15 gallon barrel with a 4” duct and 4” inline blower that blows hot air into my Motorhome. It works but a lot of heat goes out the chimney. It’s my emergency backup heat source. I’m still running on propane until I build my school bus which will have a double shoebox rocket cookstove water heater.
I haven’t used my stove enough to see how much dangerous creosote is produced. Pallet wood burns fairly hot in it and I don’t damp the stove down. Smoldering wood stoves are notorious for creosote but I personally have not seen a chimney fire from a conventional stove that is burned hot. Has anyone seen that happen??