Satamax Antone wrote:I don't know how you guys can stand baloon or stick framing, in the US. Worse bit, it's my job, partly, to make such structures. But i like thick stone walls!

While it doesn't seem to have much penetration in the enviro world, it is hard to imagine a better system than stick. You can do almost anything with it, which does mean that a lot of very bad building get built that way, and a lot of incredibly simple, nearly garage like buildings get built with other systems and great fanfare. Bottom line, most buildings have stick floors, intereior walls, and roofs anyway. It is really only the exterior walls that vary and in many cases stick would be more efficient there. For instance load bearing straw bale walls often have more wood in them that stick walls with infill. And many "better" systems are only even minimally affordable if you Tom Sawyer some folks into building them for you at a seminar. Think of something like a yurt, if the objective is some fabric walls, even on a mainly circular footprint, you could build a sturdier, faster cheaper building in stick and actually have something that would take a thump from a falling branch from an adjacent tree. The yurt probably needs slats made out of fairly noble tress, and won't embody as much carbon as a stick structure would.
Satamax Antone
gardener

Posts: 3454
Location: Southern alps, on the French side of the french /italian border 5000ft elevation
180
posted 6 years ago
Tam, I do build with sticks every now and then. It has it's advantages. Sure stores come carbon. But the walls have no inertia whatsoever. This is rather bad for heating or cooling. I live in france. Where most of the trad buildings are stone, or short timber framing with wattle and daub. Nowadays, lots of poured concrete, with rebar, or concrete blocks. They tend to insulate from the outside now. Since may be ten/fifteen years. And we get lots of air entrained concrete blocks and high insulation red clay blocks too, since may be ten years. So except for the rooves. There isn't much wood. But all those types of construction have a pretty high inertia. Which is nice for example, in the southern alps, where it gets real cold at night in summer, but freaking hot during the day. The houses accumulate a bit of heat during the day, and release it at night. Then they cool down during the night and it's fresh again inside for the next day. Which is rather nice. Strawbales and stick, it's been done in france, many times. http://thelaststraw.org/feuillette-house/

I would say, I preffer post and beams myself. Keeps the skills alive.
fermeossature4.jpg 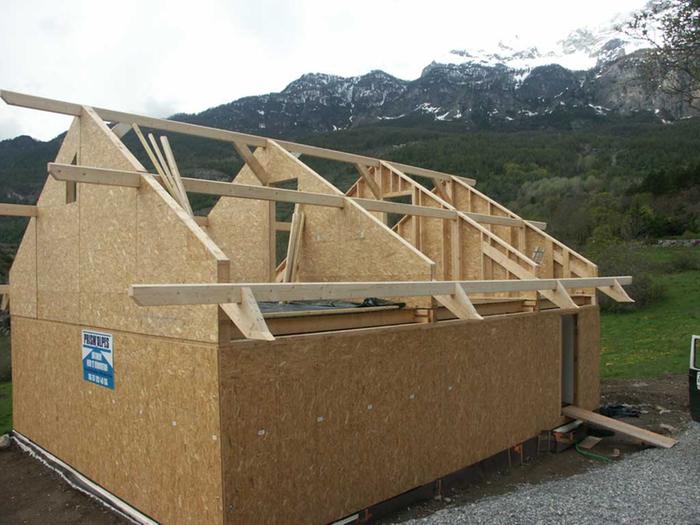 tomas viajero
Posts: 47
6
posted 6 years ago
I agree with both of you.

There definitely is a place for stick-built in a structure. But, my preference is for timber framing.

The last stick-built house I did was in 1987. It was quite large and I said to myself at the time that I won't build any more of these. Now it sits idle because no one can afford to heat it.

My passion was always for timber-framing because it required more of my skills. I loved being able to design in puzzle-like patterns, trying to get all of the various elements to balance out optimally. With stick-building you can do anything you want, but with timber-building you have to weigh whether moving a bent two inches to make the bathroom larger is a good decision. Sometimes I tried to get one wall to look a certain way, with windows lining up with purlins in the ceiling, or trying to get the perfect size relationship between posts, beams, and purlins... It's really a work of art you end up with.

That being said, I still do stick built for interior partitions.
Regan Dixon
Posts: 134
Location: Zone 4b at 1000m, post glacial soil...British Columbia
9
posted 6 years ago
I live in a forest where the trees are straight and fast-growing, but the rocks are round, and don't stack--in an earthquake zone, no less. It follows that I choose stick-framing.
If I lived somewhere with nice, parallel-sided sedimentary rock, I'd be more inclined to use it for building, particularly if the ground wasn't likely to shake it all apart like so many sugar cubes.
Permaculture--using locally appropriate technology.

Posts: 3792
Location: Upstate NY, zone 5
314
4
posted 6 years ago
The choice is not really between stick framing and stone construction; it is between conventional stick framing and other methods which incorporate more mass and thermal inertia. Timber framing with infill can do that with as much earthquake resistance as stick framing, and there are numerous infill possibilities.
Daniel Schmidt
pollinator
Posts: 219
Location: Jacksonville, FL
72
I like...

posted 6 years ago
Has anyone here seen Swedish Platform Framing? I ran across that page a few years back and it seemed pretty interesting. I agree that using something locally appropriate is generally the way to go. Certainly not a lot of rocks here in Florida. I'm pretty sure most of the stone here has been trucked in from places north of here.

Using some of the advanced framing techniques or the Swedish Platform Framing methods can reduce the amount of wood used and allow for more insulation, thermal mass, or both. I like the idea of a 'sandboxed' thermal mass. Having a large mass here in Florida on the outside of your house soaking up sun all day keeps your house far too warm all night as opposed to an insulated wall. I guess the reverse would be true in a colder climate; Using a large exterior mass facing away from the sun would persistently stay cooler than a comfortable room temperature for a significant part of the year.

Even though I don't have rocks, I do have plenty of sand. There are places further inland with a good amount of clay, but very little that I can find at the beach. Maybe I will get lucky and find some when I move, or maybe I will just have to buy some. Either way, I plan on putting thermal mass inside an insulated building to help it keep cool. Keeping it out of direct contact with the ground and adding some ducts to run cooler air through at night may be a method of keeping temperatures more comfortable. The opposite of this for colder climates would be a rocket mass heater.