Michelle Schurko
Posts: 17
Location: Saskatchewan
posted 6 years ago
Not sure if this would be better under critters or under energy, so I'll try here.

Would there be a method of using animal power (I'm thinking mainly dogs, but also cows or horses) to generate electricity that wouldn't be harmful to the animal? Or even a mix of human/animal power generation as in bike or treadmill power generating. I suppose their pulling power would be the best option, perhaps somehow hooked to a turbine or alternator or something. Also a nice back up for days that walking the dog seems like way too much work...
Su Ba
pollinator
Posts: 1940
Location: Big Island, Hawaii (2300' elevation, 60" avg. annual rainfall, temp range 55-80 degrees F)
864
I like...

posted 6 years ago
A treadmill generator wouldn't produce much power but it surely would get the animal rights people flying into high gear. They generally think it is outrageously cruel that an animal does any sort of work.

Michelle Schurko
Posts: 17
Location: Saskatchewan
posted 6 years ago
From my experience and education, it does WAY more harm to not provide exercise and stimulating activity for an animal. But it is quite true that there tends to be a bit of anthropomorphic projection onto animals. I'm a pretty big Cesar Millan fan!
Shan Renz
Posts: 38
Location: Missoula, MT
11
I like...

posted 6 years ago
Back in the middle ages they had spit dogs to keep the meat cooking evenly over the fire. I'm sure a large dog could be trained to run on a treadmill attached to a simple turbine.

http://shanartisan.deviantart.com/
One must be sane to think clearly, but one can think deeply and be quite insane. -- Nikola Tesla

posted 6 years ago
Shan beat me to it. Turnspit dogs are apparently extinct now, but they were a thoroughly-developed technology 500 years ago.
turnspit-dog.jpg


At one extremity of the spit was fastened a large circular box, or hollow wheel, something like the wire wheels which are so often appended to squirrel-cages; and in this wheel the Dog was accustomed to perform its daily task, by keeping it continually working. As the labour would be too great for a single Dog, it was usual to keep at least two animals for the purpose, and to make them relieve each other at regular intervals. The dogs were quite able to appreciate the lapse of time, and, if not relieved from their toils at the proper hour, would leap out of the wheel without orders, and force their companions to take their place, and complete their portion of the daily toil.

But these were not like sled dogs who get excited and happy when it's time to work:


The dogs were also taken to church to serve as foot warmers. One story says that during service at a church in Bath, the Bishop of Gloucester gave a sermon and uttered the line "It was then that Ezekiel saw the wheel...". At the mention of the word "wheel" several turnspit dogs, who had been brought to church as foot warmers, ran for the door.

Actually this anecdote has prompted a memory. I knew a lot of sled dogs growing up on the Yukon, and they really were excited and happy when it was time to get leashed up to a sled. But I also knew one of those sled dogs who was trained to carry a pack (a sort of saddlebags affair draped over his back that he could carry 20 pounds in, he was a big dog) who was never happy to have the pack put on him. You'd say the word "pack" and he would sort of slump his spine and look all droopy and hangdog and unhappy, and try to slink away. We never put more than our sack lunches and a spare hatchet and gold pan in that pack, and he perked up well enough once we were on the trail, but it definitely wasn't his heart's desire the way pulling a sled was.

What this tells me (and the scientists will no doubt scoff) is that dogs have preferences. They don't necessarily mind work, but if it's boring and unpleasant (by whatever criteria dogs use to determine these, not likely to be very predictable to us) they'll experience it as more of a burden than if the task suits them. So perhaps some canine engineering (my back-formation neologism from "human engineering") of the "run on the wheel" task is needed so that the dogs will be exited to do it. I can't instantly imagine how to accomplish that but it should be within the realm of the possible.

Dale Hodgins
Posts: 9002
Location: Victoria British Columbia-Canada
697
posted 6 years ago
A stronger version of a horse walker,  could be set up so that it generates electricity instead of consuming it.

Many early power systems were based on animals walking in a circle, including early electrical production. Cob houses in England were built using animals treading. Cranes at ship yards used horses.
lead-walker.jpg 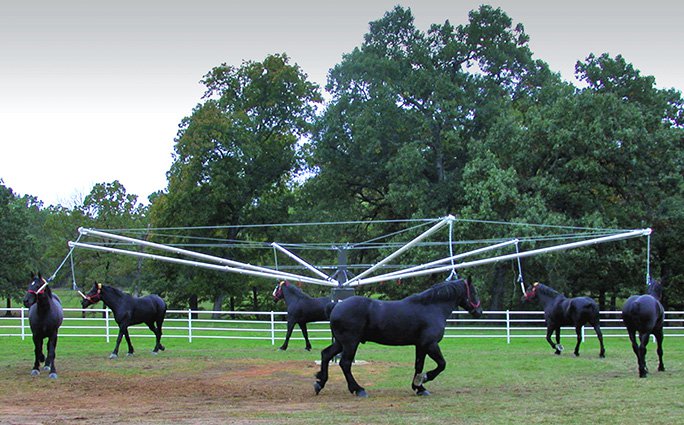 posted 6 years ago
I once seen a pic on internet of a walker with cows pulling it that had a rear end cut so that it turned a drive shaft to a transmission that turned a generator or alternator there by producing electricity.
I wouldn't mind seeing these locally maybe higher tech ,the cattle could be changed regular and the manure could be used to produce gas to run more generators the cattle could be used to produce there own food
the manure after being put through the digest er could be used to fertilizer the fields
then after they reached a certain age they could be retired to be used for meat.


BUT THIS IS TO SMALL FOR AMERICANS we have to do things in a bigger way to produce more corporate income.Like dig lignite coal and burn it to poison our air and drill for natural gas to damage our ground water.god forbid we do some thing that don't damage our environment. (sorry got carried away)

posted 6 years ago
I considered putting photo voltaic cells on my roof.  I was going to use them to cut my electric bill which is way too high because I have electric resistance heat.  The electricity I would have replaced comes from a gasfired power plant.  The power plant is only 30% efficient the distribution lines are 94% efficient.  On the other side the state of the art photovoltaics are about 10% efficient.  After considering all this I decided the better investment would be to use the roof area to collect heat directly and use it to heat the house.

A similar analysis could be applied to your situation.  You may find it more efficient to use the animals to do the work directly rather than generate electricity.
Phoenix Blackdove
Posts: 51
Location: Adelaide, Australia
13
3
I like...

posted 6 years ago
As the venerable poster above me said, some things are better suited to having the work done directly rather than generating the electricity to do it for us. One example that springs to mind is pumping water. I've seen many household water designs that rely on a small pump to get the water up to pressure every time someone turns on the tap. To me, this seems like an inefficient use of resources. I think it works just as well to have a small header tank raised above the the ground level - about in line with the house roof seems to work well- and use gravity to provide your water pressure. That way you only need the pump when the tank is empty and needs refilling from your larger ground based storage.

In fact, this is the design attached to several of the old farm houses I've lived in or visited back in my home state of Queensland. It seems to me that this set up would be easier to incorporate animal per into, as depending on the size of the header tank it might only need refilling ever few months.

I have another thought which I will preface with the statement that I'm not very knowledgeable about air pressure beyond the fact that it's handy, and can be used to run many things. Would it be possible to set up some kind of air capture and pressurisation device that could be animal powered, rather than assume that electricity is the only thing able to be generated in this manner? Bill Mollison is a fan of the trompe, and for good reason, but they're not going to work without a good drop and a running water source.
Jaime Cameron
Posts: 22
posted 5 years ago
http://modernfarmer.com/2015/01/economical-equine-horse-treadmills-became-niche-thing/

Here is an article on a horse powered treadmill that is made in the USA.
If you google 'horse powered treadmills' some YouTube videos of it working can be seen
Sorry I couldn't get a video link to copy.
I don't see why someone couldn't take this design and shrink it for a goat, sheep or dog.
But I am not an good with that kind of stuff so who knows.