I have a bajillion ants - is this good, bad or just peachy?

posted 4 years ago
We have sandy soil and thousands of ant hills in the yard. They are boring small black ants that only try to bite you if you mess with them. I'm fine leaving them be but I was just watching the Self Reliance Summit interview with Laurie Neverman and when discussing "balance" they mentioned ants.

So it got me thinking. Are my ants good? Are they bad? Do they indicate that my "system" is out of balance and I need to do something? Are they a resource to leverage?

I'm fine with leaving them to do their digging. But should I be celebrating them more, helping them out or bringing in anteaters to even things out?

What are they contributing to the "system"? I'm assuming they do some aeration. Maybe they eat something that I'm happy they're eating? Maybe their poop cycles potassium?

posted 4 years ago
Ants, I like to think of them as "the good, the bad and the ugly", they can do great things but they can also overwhelm systems.

Obviously if you have hordes of ants, they like it there, some are fungus growers and those are the really good guys.
We tend to move them rather than turn into exterminators, but like right now, sometimes you have to reduce the population for your peace of mind and or safety.
The presence of ant mounds indicates a "worm free zone", worms will not go to areas where they will be eaten by ants.

If you don't have them getting in your way (or in your house) then you can move them by using spent coffee grounds over the offending mounds, they will move quickly.

If you need to reduce the population you have several, non chemical alternatives:

Soda Water, pour two, two liter bottles in and around the mound, this removes oxygen and they will die.

DE, use a shovel and open the mound, pour in DE, this will create a "clear the nest" scenario and in the process the DE will do its job and destroy the nest.

Spent Coffee Grounds, pour over the mound, gently water the grounds and the nitrogen will leach into the mound, this creates a Move it or Die situation for the ants and their eggs.

You can also mix DE with the coffee grounds, disturb the nest and pour in the mix, this will be a double whammy to the mound and they will move or die.

To keep ants from wanting to occupy an area, just spread coffee grounds on the soil so it is covered. This will keep them from wanting to live there and it will attract earthworms to the area.

We have seven species of ants on our land, two of these species are Fire Ants, we leave them alone unless they decide to set up shop in our gardens or near our house, those colonies have to go away either by moving or decimation.
Currently I have to eradicate about 10 colonies, I've tried moving them and they just went to worse places for them to be.
So I will be permanently removing them with a triple hit, which is disturb nest, introduce DE and Coffee grounds, wait a day, then pour 2, 2L bottles of Club Soda, one into the mound and the other around the mound.
This method will kill the colony, not my preference but in this case it is necessary since they just refuse to cooperate and go where they can live in peace. I have probably 5 dozen colonies that live happily away from the house.
Any ants that get into the hog area become food for the hogs, I've seen them root up a colony and slurp up the ants like no tomorrow.

posted 4 years ago
Thanks Bryant! Luckily I have fewer in the garden. But it sounds like I should probably start moving them out of there because I think the worms are better for the garden. And I'm thinking I should leave the ones in the yard alone since they aren't bothering anyone. For reference, in the photo there are at least 7 ant hills.

If anyone knows of additional benefits (like fungi growing) or additional downsides (like worm exclusion) please chime in!
Ant-hills.jpg 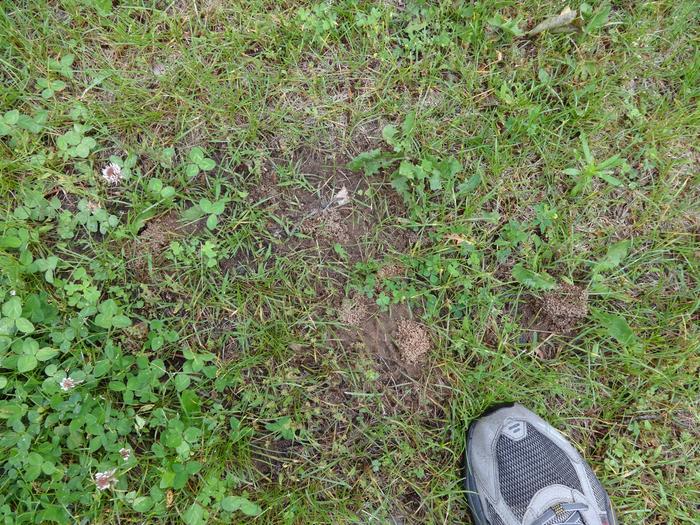 posted 4 years ago
Mike, your photo shows what I would consider a single colony (one of ours covered over 10 sq. feet when I started digging it up).

Colonies usually don't live right next door to another colony, ants do engage in War, so I look at those little hills as several egress/ ingress points, showing just how large the colony has grown.
A single colony can number in the millions if left to themselves.