posted 5 years ago
I love my bike!  It's traveled half way around the world with me.  It looks good.  It handles well in traffic and can turn on a dime.  It's a great city bike.

Long ago, I had an electric bike.  It was one of the early ones where the battery weighs 60 pounds, the bike itself well over 100.  It went like stink but was a beast to stop and/or turn.  The great thing about it was I could pedal most of the time and just use the motor for hills.

Now I'm thinking I want to travel by bike more often.  With my physical limitations and psychological tendencies, going by peddle bike is just not happening.  There are too many hills near home.  I'm toying with the idea of saving up for an e-bike or e-bike upgrade.  If I start saving now, I might have enough to buy one by spring.  This looks like a really nifty option for converting my old bike to electric - but would it work for me? 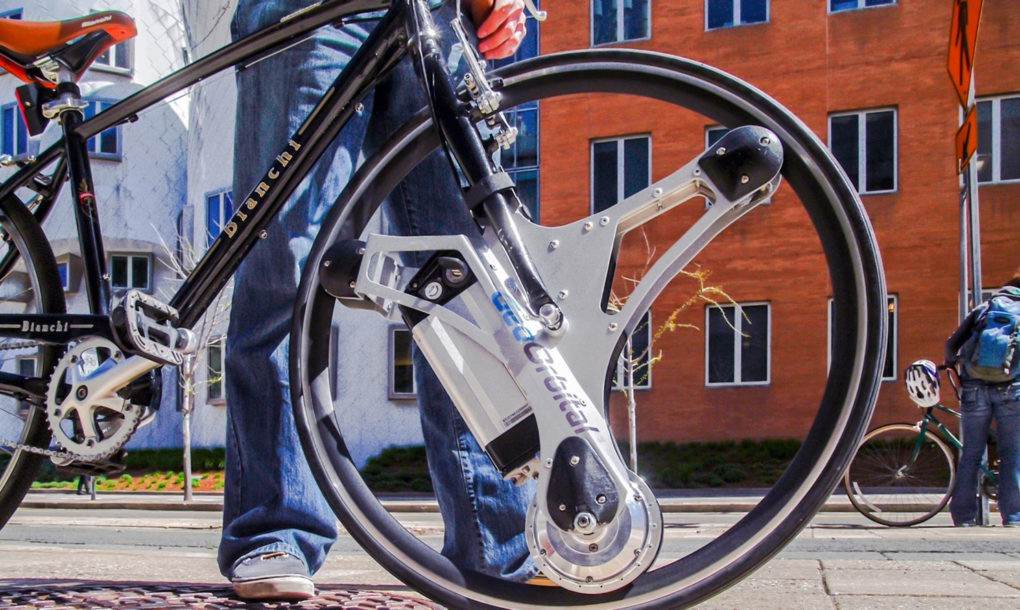 What are some of the options out there in the world of electric bikes these days?
What are some of the ecological considerations about having an e-bike and how can I minimize them?
How about an e-bike kit vs a whole new bike?
Would a solar charger help mitigate the need to charge?
What are my more affordable options?
What else do I need to think about?  (yes, I can take limited speed e-bikes on the local bike trails, they fall under the same traffic laws as bikes in this city)
Where do I start learning about electric bikes?


I know it's going to be one of those things where cycling by e-bike will be better than going by car (but not as awesome as not having to travel).

Ashley Joy
Posts: 9
posted 5 years ago
I'm not familiar with the one you posted, but my husband has a kit he got from Luna Cycle and he loves it. Not too heavy, reliable, and unobtrusive. We live in a hilly area too and he's had no problems whatsoever.
r ranson
master steward & author

posted 5 years ago
That Luna cycle one looks neat.

I wonder, are some ebikkes better at hills than others?  How would I tell?

Ashley Joy
Posts: 9
posted 5 years ago
I'm not sure. My husband did a lot of research before he bought his, I can see if he has links I can post. I will say, though, that he's a pretty big guy (6 ft, 210 lbs) and can go 12-15 mph up a mile long, 7% grade with the Luna Cycle kit. Depending on where he's going, he might get a 15-20 mile range out of one battery charge, and he just bought a second battery to carry with him if he needs to go further.
Lock Hughes
Posts: 3
1
posted 5 years ago
Hi. First post here. Disabled old sailor glad to be aboard.

I actually stumbled across electric traction decades ago, to power a small ferry boat across Toronto harbour. (The stink of diseasal engine exhaust made my daughters ill.)

So I bought my first "ebike" to reacquaint myself with batteries and "electric things". (First Institute of Higher Drinking was a University to be an Electrical Engineer... though ended up wasting my time as an accountant. Hehe)

This was a tiny two-wheeled stand up kick scooter (with extra "kick" via a motor plus 2x 12V 10Ah SLA batteries in series... about a nominal 400 watts). This was in the years before Canada (and Canadian provinces... think "States"...) first legalized our "power-assisted bicycle".

American cousins get to play with one whole horse (748 watts). Canada is more pony-powered at 500 watts. Euro folks... gets "worse"/less powerful at 250 watts.

Anyway... Just logged aboard here as wish to point ya to another forum that's all about electric vehicles, and those mostly the battery-electric bicycle. Mostly US folks, but also Canada, Europe, etc, etc. All over, but in the English language primarily:
Endless Sphere

posted 4 years ago
I'm still considering this and saving up money for the big purchase.  I don't know if an E-bike is right for me or not.  17km each way, through some tricky traffic and some unpleasant intersections.  I can avoid some of the traffic if I go on the unpaved gravel paths, but my current bike isn't happy with this.

There's just so much information out there, I'm feeling really overwhelmed when I go to a site because it assumes I know what kind of bike I want.  There doesn't seem to be a "I'm a noob wanting to find something a bit electric to commute with".

posted 4 years ago
To quote myself on another E-bike thread https://permies.com/t/58361/Electric-Mountain-Bike


Devin Lavign wrote:I have been looking at electric bikes for several years, Some good resources I found are.

This is by far the best and easiest to navigate E Bike site I have found https://electricbikereview.com/ They also have a youtube page where you can see many video reviews https://www.youtube.com/user/ElectricBikeReview

This is also a good site to cross reference the reviews of the first site https://www.electricbike.com/

As I have said I have been looking at E bikes for several years. I would say what I have been doing is looking every year or every other year or so, to see if prices and quality are getting to a point for me to consider buying one. The prices are still high for decent quality, but they are getting more reasonable. Though now that I have rural land, with a long dirt road that is a lot of up hill to get to my property, and town is 7 miles away. A peddle bike is not really a good option, so I have started paying a bit more attention. I am especially interested in some of the cargo bikes, as they would let me do some shopping and still make it back home.

posted 4 years ago
Oh, this is awesome! I have been looking and dreaming, too. I don't drive, and I sure as hell don't pedal up hill! So I've been looking at e-bikes and e-scooters as well. And, like R, am having a heck of a time trying to figure out what is actually good and will last. We have a very long bumpy gravel driveway, so anything that is funky lookin' is going to get rattled into a pile of crap, unless it's very high-end, which I can't afford. I need something fairly rugged, and something able to carry some load. I want to use it to take my veggies to market.

So, yeah, let's have this conversation!

Lock Hughes
Posts: 3
1
posted 4 years ago
`Round here (Toronto), last time checked, one can finance the purchase of one new electric bike (with a thing "good credit rating") where monthly loan payments = about HALF of a monthly transit pass. (And no more "last bus"... always a seat... no more "last mile"... Get to work not needing a shower and a change of clothes. And a snack. And a nap.) But using any old (steel frame) bike can also buy a conversion kit of a motor, battery and bits for just some hundreds of dollars? And yah may still pedal for warmth and exercise as usual, and also to extend the ranges per charge, but also to shave off peak loads at startups, up hills, etc. Such that the battery cells aren't as taxed and last longer before final recycling/replacement. "Best" these days, to drive overall cost to operate to be about the same energy used as the calories in foods. And these days, in a Lithium world, anybuddy tries to sell you lead batteries? RUN AWAY.
r ranson
master steward & author

posted 4 years ago
Thank you guys.  The list of what I'm understanding is expanding.

The video taught me I think 'pedal assist' might be for me.  The e-bike I had years back was very first generation and only had throttle control.
Lithium battery.
I like the idea of something that can haul cargo as well as me.  Maybe something that can include saddle bags or a trailer?
I don't like cargo that affects the steering too much (front basket).


I found this company called go time electric bikes that isn't too far from me.  They have some pretty stylish looking bikes (I like the vintage look), but I suppose I need to think about function as well as style.  I might try a visit, but I still want to learn more about what to ask before I go.

posted 4 years ago
I've looked at this brand because there is a dealer near-ish me: http://www.daymak.com/pages/scooter.php I really want this one!

) Watt is still plenty (as adults of good average fitness average between 50 and 150 watts for an hour of vigorous exercise). Also, they fail to mention TORQUE. AKA rate of "acceleration".  Electrics can output about FULL torque at about ZERO RPMs. And ya can discount anything that doesn't offer REGEN... regenerative braking. And then you have your aerodynamics... For example, folks in the Netherlands, with no hills to speak of, have some terrific winds to battle. (In 2012, they estimated already ONE MILLION of their European "EPACs" - electric pedal-assisted cycles - on their (vastly superior) biking infrastructure. Roads and paths.) Then you have the Swiss... think bikes eg from Stromer?

In the new type-approval, there are 2 categories that can accommodate electric bikes. L1e-A is for “powered cycles” with a maximum speed of 25 km/h and maximum 1 kW of power. L1e-B is for “mopeds” with maximum 45 km/h and 4 kW. So-called speed pedelecs up to 45 km/h come under this category."

With electrics, it's really ALL about the battery (chemistry). Just terming batts as "lithium"? You have lithium-ion, plus LOTS of flavours... chemistries and formats:
https://en.wikipedia.org/wiki/Lithium_battery

And re "aerodynamics"? I went to recumbent. Need to add more storage ("weight")? I went tricycle. And the sense I have from media reports? The urban world is going to folders. And "fat" tires. (Better in snows and on sand, but also handy for handling streetcar tracks, etc.

Hehe... Is there such a thing as "too much" information?

posted 4 years ago
While not cheap, Stealth E bikes are rock solid bikes designed for off road ability. They have a new bike coming out the P-7 and running a kickstarter that if you pledge would give you $2K savings on the bike.
https://www.kickstarter.com/projects/1357249345/the-stealth-p-7-electric-commuter-bike?ref=nav_search?utm_source=Youtube&utm_medium=Video&utm_campaign=The%20new%20Stealth%20P7

Still out of my price range, but for some it might make the difference so I thought I would share.

posted 4 years ago
My wife won't ride uphills.  She really is a theoretical bicyclist, like most adults. She can but doesn't.   I keep telling her that when we retire, she should get an electric bike.

She is good with that plan.  I don't need one because I use my regular bike.

My friend has one from Germany-the whole bike. It cost more than $1000 US, but it is a truly great bike and a dream to ride. I do worry a bit about such things being stolen.

One issue I would have with adult tricycles is that you can't bring them on public transit. In Portland, you can put it on every city bus or light rail train.  You can go to a lot

more places, because you can bike to the station, go a ways, then bike somewhere when you leave the station.

I usually do my errands on my bike and bike to work frequently, but I might not if I was worried about it being stolen.

I also use my bike to get to great skateboarding hills and skateboard.