Clifford Gallington
Posts: 112
Location: Kansas
21
posted 9 years ago
I found this wonderful website where a large portion of the transportation is by bicycle, this is such a change from where I live.
people is dresses and suits on their way to work, mothers with all of the kids on errands.
I wonder what it would be like if transportation advancement stopped with the bicycle.

Posts: 7926
Location: Currently in Lake Stevens, WA. Home in Spokane
337
posted 9 years ago
I believe that it is Amsterdam that I read has a 'fleet' of public bicycles (all painted the same color as I.D.)

The idea is that if you are at point 'A', and want to go to point 'B', you simply take one of these public bikes and go.
Theoretically, somebody at point 'B' will want to go elsewhere, and simply take the bike you left there.

Supposedly, it works well...just DON'T paint your own bike the same color as the 'public bikes'.

Another cute trick they have is that most buses have a mail box on the back. Like most European cities, most buses eventually go past the train station, and a Post Office is usually at/near the train station. Every time a bus stops at the station, a mail clerk simply empties the mail box.

The letter you mailed at 10:00 am is likely to get unloaded that afternoon when the train from Amsterdam arrives in Paris, Brussels, or wherever you wanted it to go.

Johan Thorbecke
Posts: 81
Location: The Netherlands
11
posted 9 years ago
I've never seen public bicycles in Amsterdam to be honest, but bikes are quite cheap in the city, you can get one for about €30 if you wanted to. It won't be a fancy one but it gets you from A to B in the fastest way possible in most Dutch cities.

I do now that a National Park uses public bikes: 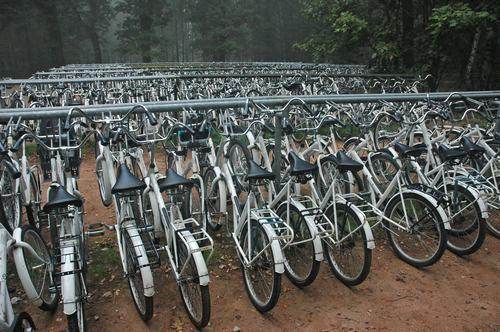 Also on almost al the train stations you can rent an 'OV-fiets'(public transport bike) for €3 a day to do the last bit of your trip by bike:

Patrick powser
Posts: 1
posted 9 years ago
I live in Amsterdam and it was strange to see how amazed people are by our bicycles

We had public bicycles which where the bright orange color as you can see in one of the pictures, but people would just put them in their garages and put locks on them so that was a fail

A lot of students dont own a bicycle but steal unlocked bicycles that are standing at train stations, this is not a big problem because if you leave it unlocked then you probably dont care about your bike.

The "industrial work basket" that the maker of the website describes is actually used by mothers to carry their children to school, though I guess you can carry stuff in it but it is most often used to transport children that is why you can see a couple photos of children in the baskets on his website.

The human powered dynamo is convenience because it lasts extremely long in some cases and they are really cheap, so you wont have to change batteries for a bike that is barely worth as much as those batteries, also because you get fined for not having a light at night and these are, in my experience, failproof so you wont ever get caught with empty batteries and a fine because of it.

Recently I noticed an increase in popularity of "Granny bikes" which are old style bikes which are bought rickety and falling apart for a low price (even though they are new) that way your bike is less likely to get stolen and you wont have to buy a fancy lock for it.

Using a phone on the bike is really dangerous and our government is trying to ban it, I have personally seen or heard of accident because of phone use while biking, even some fatal ones.

The small bikes with the high seat are actually foldable bikes so you can put them in the trunk of your small european car or easily take them with you in a train.

I really loved looking at Amsterdam from the eyes of a foreigner and maybe this answers some questions.

posted 9 years ago
Many US cities have a public bike sharing program that work as you described. In Washington, DC it's called Capitol BikeShare; there is a fleet of bikes and dozens of lockup stations around the city and for about $70/year you can take one wherever you see one to anywhere else there is a station. At night, vans come around to redistribute and "even out" the numbers of bikes at the stations.
sally ayers
Posts: 13
posted 9 years ago
Austin just started Bike Share. I am not sure how it is working out but will investigate and report back.
R Scott
pollinator
Posts: 3893
Location: Kansas Zone 6a
228
posted 9 years ago
I have one of those "small wheel tall seat" bikes from Amsterdam--it is a folding bike so you can store it in your tiny apartment so you don't need a big ugly chain. Amazing little bike.

Lisa Paulson
Posts: 258
1
posted 9 years ago
I found this thread inspiring except that they did not appear to have hills to deal with . Biking is not that easy here : )
I too have had a headlight charged by friction of a dynamo device dragging on a wheel but here I found a hack for taking a solar garden lamp and making a solar charged headlamp for visibility biking .

Chip Haynes
Author
Posts: 53
Location: Clearwater, Florida
5
posted 8 years ago
"I wonder what it would be like if transportation advancement stopped with the bicycle."

If you think about it, by time the bicycle became all the rage, a bit on either side of the year 1900, we already had about all we needed for transportation: Trains and ships and all like that. Bicycles themselves never got much better after that, as the Sturmey-Archer three-speed hub came along around 1902. What else do you need? Someone once called the bicycle the noblest of man's inventions, and I think they were right. But of course we couldn't leave well enough alone. Eventually, however, it will all slide back a bit as the oil goes away, so there's hope yet that the bicycle will make a stunning comeback.
Maybe next week.

Touch not the cat but a glove.

Andrew Herzfeld
Posts: 7
Location: Paris, France
posted 8 years ago
I spent a semester studying in Amsterdam and I loved the bike culture there so much.

Now I live in Paris where we have a very nice bike sharing program called velib (velo=bike and libre=free). For 30 euros you can sign up for a full year membership and the bike stations are everywhere. I use it everyday and I almost can't imagine living in a city without it.

I'm curious, are these bike sharing programs catching on in the US? I've heard of one in Seattle. I hope they catch on!

posted 7 years ago
I live in the Netherlands and work in Amsterdam.

By far the greatest enabler of the bicycle is adequate bicycle infrastructure. There is an extensive bicycle lane network, bicycle traffic lights, and clearly defined priorities in the flow of traffic. (Red brick on the ground is a bicycle lane, bikes have priority over pedestrians, and have the same priority as a car or other vehicle on the main road if there is no bicycle lane). There is also an extensive bike repair shop network, and most shops will let you pump up the air in your wheels for free, or have a bike bump chained to a post outside.

I highly recommend this 6 minute video about how the dutch got their bicycle lanes. Basically, massive protests due to high child mortality rates due to car accidents, bike friendly policies to cope with oil crisis, and an experimental city government that installed some bike lanes and the mortality rates plummeted. That's evidence you don't fuck with.

posted 7 years ago
Around my area there are a lot of bike trails and a bike sharing program. These things are all cool, but pretty much no one uses their bikes, bike trails etc. for anything other than weekend exercise. It's good that people are coming around to even accepting these bike things into a car centric - Midwestern style city, but if people continue to treat bikes like expensive toys and limit their usage to leisure activities I am afraid no one will start using a bike INSTEAD of a car.

In the city I live in bicycles are like a political issue, a lot of people are rude in cars and on bikes, people yelling and harassing cyclists, cyclists blocking traffic and yelling at cars. Basic silliness really.

Adequate bike infrastructure has brought us a long way, now we have a couple more obstacles before we can join the ranks of bicycle-functional communities.

I miss the "cyclist's passport" I had to pass as a child in Germany. It was part of the curriculum.

My kids have been cycling to school and kindergarten with me since they were about 2 years old (get them started on a runbike). This caused some friction with pedestrians who were misinformed anout the fact that children under 6 are in fact obliged to cycle on the pavement (no cycle paths in our town). Hopefully, my 10 year-old will have gained enough road sense to not be run over on his daily commute to middle school next year (10 min by bike). However, he will miss out bonding with his classmates who will all by taking the bus. The only teenagers cycling to school in our block are our neighbours. They're Dutch.

To remediate, I have joined a cyclist lobbying association.

Practically, I find that it is a bike WITH TRAILER that replaces a car for the usual short distances. People know me for my trailer loaded with stuff for the recycling center, shopping, you name it.

I still get a lot of comments about my cycling habits. People think me courageous; but in fact, I don't have a car at my disposal during the week (by choice) and I love cycling. I don't like walking more than 10 minutes.

My hope is that every cyclist on the roads will slowly raise awareness and change things. If you want more people to cycle, park your car and get on the bike. A trailer makes a big difference.

David Livingston
pollinator
Posts: 4328
Location: Anjou ,France
249
posted 7 years ago
Here in France most of the big towns have a cycle scheme of some sort . In Angers where I used to live its very popular . My GFs dad who is seventy cyles over 200 km every week