Mike Pierce
Posts: 2
Location: Winnipeg, Canada
posted 4 years ago
My Question: What is the insect shown in the picture below that is on my apple trees?

The background: In the last 2 or 3 years I've planted a bunch of young fruit trees and have been encountering some problems. One major problem is deer, but I think I can get a handle on that. The other problem I've had with my surviving apple trees. They appear healthy and produce blooms in the spring, yet do not produce any fruit. I did not expect much or any fruit production as the trees would be about 3-5 years old, but I believe my blossoms are being eaten by an insect shown in the photos below. I have many different types of apples and am sure that having a proper pollinator isn't the problem. My dad took a few of my apple trees and does not have the problems with deer or this mystery insect and he has been able to produce fruit already. The mystery insect was observed on all my apple trees and were usually on the blossoms of the trees. I could not find the insect on my old ornamental crab which was loaded with blossoms and bees. I wondered whether they may be a pollinator I was not familiar with, and not being able to identify it, I went with the rule of leaving it be unless I knew it was damaging. Thanks for your help identifying my mystery insect.

Trying to add photos, but not sure if attaching them will work.. 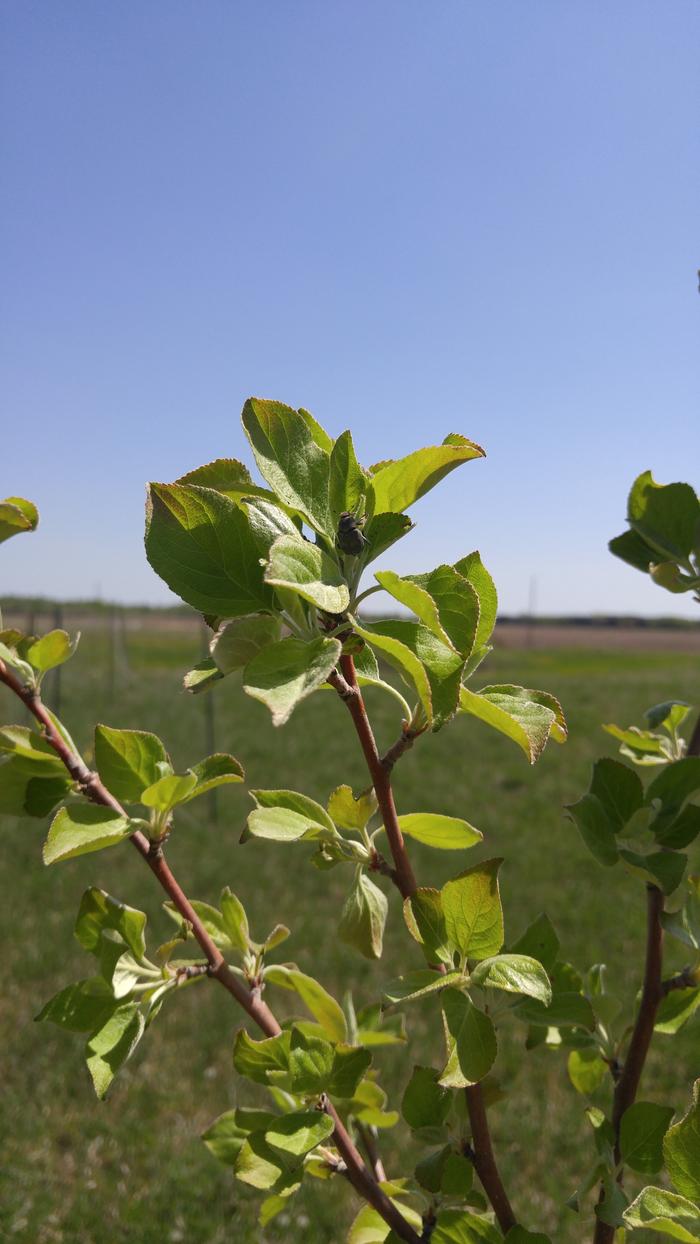 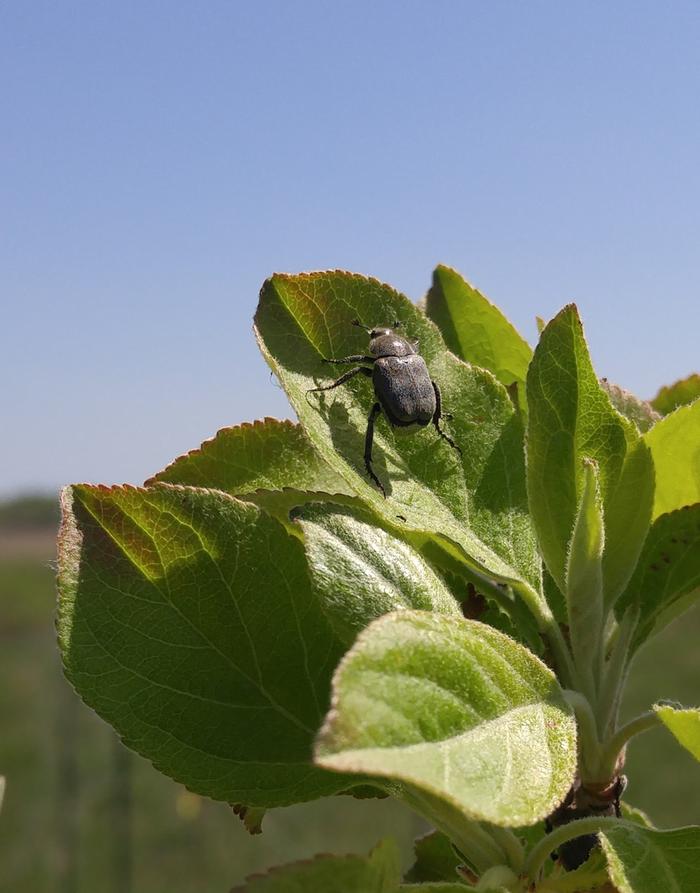 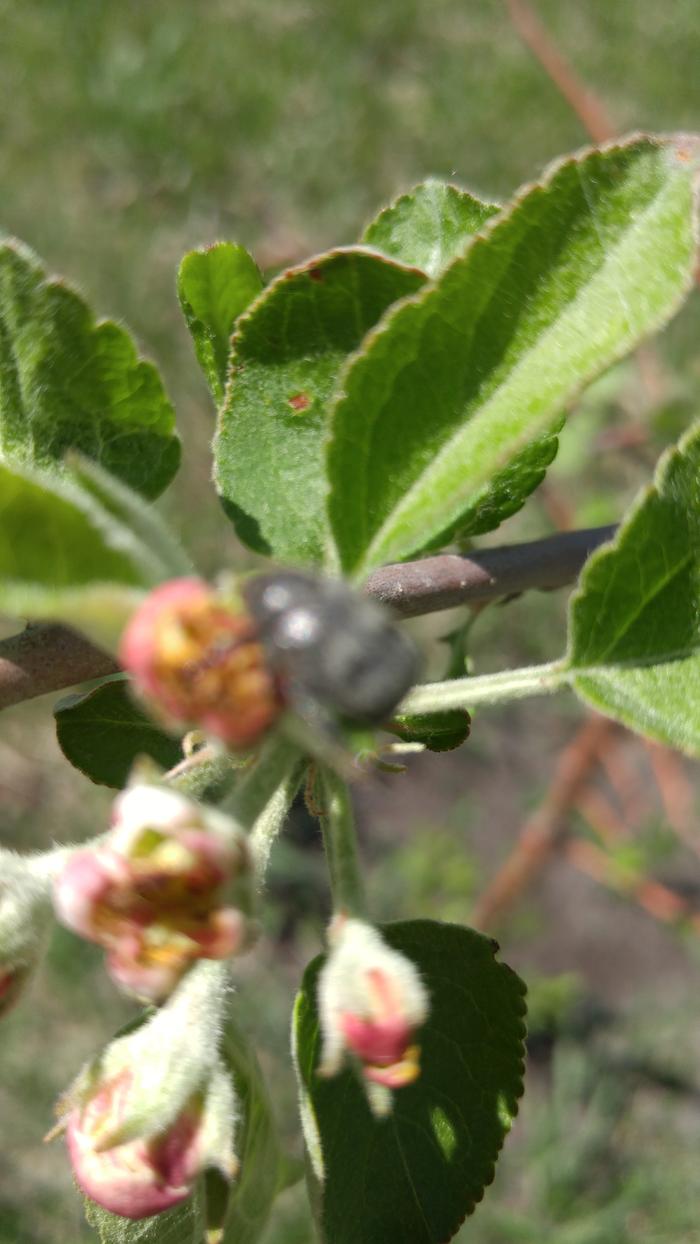 posted 4 years ago
Maybe this site will help http://bugguide.net/node/view/3769 ... I think it looks like some kind of scarab beetle but that covers a large group including both beneficial dung beetles and destructive Japanese beetles.

I'm not finding anything with the patterning that I think I see in the blurry last photo. There is a 'dark flower chafer' which I think looks close and it is sometimes known to damage flowers. It seems to have variable coloring that is mostly black with white markings
Bryant RedHawk
gardener

posted 4 years ago
I believe that what you have there is called the "Flower Beetle". The following information should be helpful.

Flower beetles are common in gardens and flowerbeds.
Two of the most common flower beetles in the United States are Euphoria sepulcralis and Protaetia fusca.
They are scarab beetles in the subfamily Cetoninae. These are small beetles about 0.5″ long.
The flower beetle E. sepulcralis is found throughout the eastern United States as far north as Illinois and as far west as Texas.
It is a dark beetle with a metallic green or bronze sheen.
There are white markings on the wing covers.
The flower beetle P. fusca is originally from Asia. It has become established in Florida. (This one looks most like your photo).

Flower beetle larvae live in the soil.
They seem to feed on the roots of grass and other plants in the same way as white grubs do.
The larvae have been found in areas where packrats and moles are present.
They may also feed on decaying organic material.
They change to adults in chambers in the soil.
In warm climates, the adult beetles are found throughout the year.
The population seems to peak in the summer.

The adult flower beetle normally feeds on pollen.
It takes the pollen from flowers on various trees, including apple, orange, and dogwood.
It also gets pollen from flowering plants such as daisies and milkweed.
It sometimes feeds at cuts on trees where it eats fermenting sap.

The flower beetle can be a destructive pest when it attacks corn or roses.
It has also been found attacking fruit trees, mangoes, and avocados.
On fruit trees, the beetles cause damage when they destroy the flowers.
This reduces the number of fruit that can develop.
The beetles attack the kernels of corn while the ears are on the stalks. .

Because they fly and feed in flowers, the adult beetles will be difficult to control.
The Non-Permaculture way to try and control these little buggers is;
A pest control professional can treat flower beetles in the larva stage while they are still in the soil.

I would recommend trying insect traps for your apple trees, placed near the blossoms and dosing the soil with DE early in the spring when the larvae will be hatching.
It will probably take several shots of DE on the soil over a month long period to get enough of them to break the cycle.

Mike Pierce
Posts: 2
Location: Winnipeg, Canada
posted 4 years ago
Very interesting. I've never seen these things around and your post seems to say that they wouldn't be found as far north as where I am in Manitoba (zone 2/3). I am not able to observe the trees consistently in spring, but it appeared that these beetles were eating the leaves. If they appear next spring I will try hand picking them.

Thanks for the assistance.