Todd Nease
Posts: 16
posted 4 years ago
I have heard that if you use too much nitrogen for your prickly pear you will get mostly pad and little fruit.  Is this true?

I have been growing them for years and get no fruit, but I keep my crop small, and I have been propagating mostly.  But now I have enough plants to surely produce all the pads I want to eat and pickle next year, and as I have now become quite fond of the fruit I would like to get some action going on that end.

I have acquired several verities.   Some produce a red fruit, some a cantaloupe color, and a yellow variety.  All are grown in pots too.  they are part of my pot design for container gardening,  Most are around the edges of 20 gallon fabric pots.  And most of those are first year rooted, but from an old growth cactus someone needed reduced.  Some of those pads were over 30 lbs when I started rooting them.  And all seem to be fine now.  So next spring I expect to see major growth.  I have older ones in terracotta which are all kept at about 3 foot but they were left alone this year to grow pads like crazy, which they all did.

What I am wondering is should I avoid fertilizing them to induce more fruit production or is it more a function of their size?
Anne Miller
master steward

posted 4 years ago
Might be too much water.  If you fertilize it would need to be something for blooming.

All my plants are wild and only get watered when it rains.  We had no rain from May to August.
We had lots of the fruit, Tunas.  The deer ate all the fruit.

Maybe someone with experience growing in a garden situation will give you their opinion.

Think of where Nopales grow naturally, the desert. Now in that environment there is little in the way of water or Nitrogen, so this plant has adapted to that set of circumstances, deviation is allowed but not on a large scale.

Since you have been using your pads to propagate more plants, you have not yet allowed them to mature.
If you stop snipping pads to create new plants, in a year they should start to produce Tunas (fruits).
When you get Tunas and want to harvest them, be sure to wear really good gloves.
The tunas are covered in very fine, hair like spines that will act like a porcupine quill and work their way deeper into your exposed flesh, that isn't any fun and can be dangerous for your health.
The tunas will be green then turn red as they ripen, the deeper the red color, the riper (and tastier) the fruit.
Wear the gloves when you peel the tunas, those no-see-um spines hurt like a thousand fire ant bites.

Krofter Young
Posts: 39
Location: Baja Arizona
5
posted 4 years ago
I have quite a few Opuntia ficus indica here on my farm in Baja Arizona (there are dozens of native species of Opuntia growing wild here).  After closely observing fruit setting for the past 32 years the answer is a bit convoluted.  What I can tell you is that insufficient water does not aid in fruit setting.  I can also tell you that over watering does not aid in fruit setting.  I don't irrigate my nopal orchard at all, but I do mulch it heavily.  The mulch should not be rich compost, nor should it be something that will make a tight mat (like old alfalfa) - plain old loose straw works well. And the mulch needs to be kept away from the plant.

Fruit setting is a tricky thing.  It depends more on the type of rain and when that rain comes, than the amount.  First it's important to understand that there is a relationship that exists between the ability of nopal to store water and nutrients and its ability to make fruit.  Many varieties of Opuntia set fruit based on winter rains that occur from December into March.  The last half of March, April and May here is typically bone dry, which are the conditions that nopal likes to make flowers and set fruit.  In other words, they're counting on winter rains to store up water and nutrients to produce flowers and fruit in the late spring.  If winter rains have been dismal, flowering may be ok but fruit-set may be poor.  If the winter rains have been decent but sporadic there will be a number of flowers and some fruit set.  If the winter rains have been exceedingly heavy there will be problems with blossom rot, and other fungus issues as well as pest infestations.  The best conditions for fruit set seem to occur after winters with slow, soaking rains that occur over an extended period of time.  My speculation is that this provides the plant with the time and ability to not only soak up and store a lot of water, but nutrients as well.  The latter occurs because when the soil is dry the plant derives little nutrients from it.  So the longer the soil remains moist (not wet) through the winter, the more time it has to also pull nutrients out of the soil and stockpile them for fruit production later in the spring.  Hence the need to understand the plants ability to store water and nutrients for later use. Also, fruit set is typically low after years of heavy production.

"We can't solve problems by using the same kind of thinking we used when we created them.” Einstein

posted 3 years ago
Observing other's planted cacti here, a plant at 3 or so years old begins to really produce fruit, and it does seem to depend a bit on how much moisture the plant gets and how long and how cold it gets (we get snow here and can see a day or two of -10 to -15 F, our snow usually doesn't last though). Ones at the edges of lawn plantings that share in the grass watering as well as the natural rains; plus have something like backing rockery and a southerly facing direction to the sun seem to do about the best. I'm going to find out as I proceed on growing my own to get my own crop...
Burra Maluca
Mother Tree

posted 3 years ago
Last year was super hot and super dry over the summer and we struggled, and failed, to get much to grow.

Except the prickly pear, which was totally overflowing with fruit.  It seemed to be a bumper year for them everywhere I saw them growing, including in wild, abandoned bits of land.  They do seem to thrive on loads and loads of hot sun and not need much by way of water or fertiliser.

Here's some I passed while out on a walk last year - most years there are less than half that number of fruits on these plants!

posted 3 years ago
Oh Burra, I am DROOLING.... that might be enough to last me for a year. I saved that picture to show my husband what I PLAN on doing with all these Opuntia ... if they cooperate. Any idea what variety those were?
Burra Maluca
Mother Tree

Deb Rebel wrote:Any idea what variety those were?

Not really, no.  The locals ones all look to be virtually identical and I suspect they have just been spread to anyone who wants them by giving them pads.  Our original ones were grown from a load of pads that someone had dumped in the forest, which we dutifully rescued and brought home.  Of course, we just dumped them down somewhere and forgot them, and they grew into our most prolific patch.  I think they are classified as a noxious weed here and I've never seen them officially for sale anywhere.

This is part of one of the plants we grew from the rescued pads, taken last year. 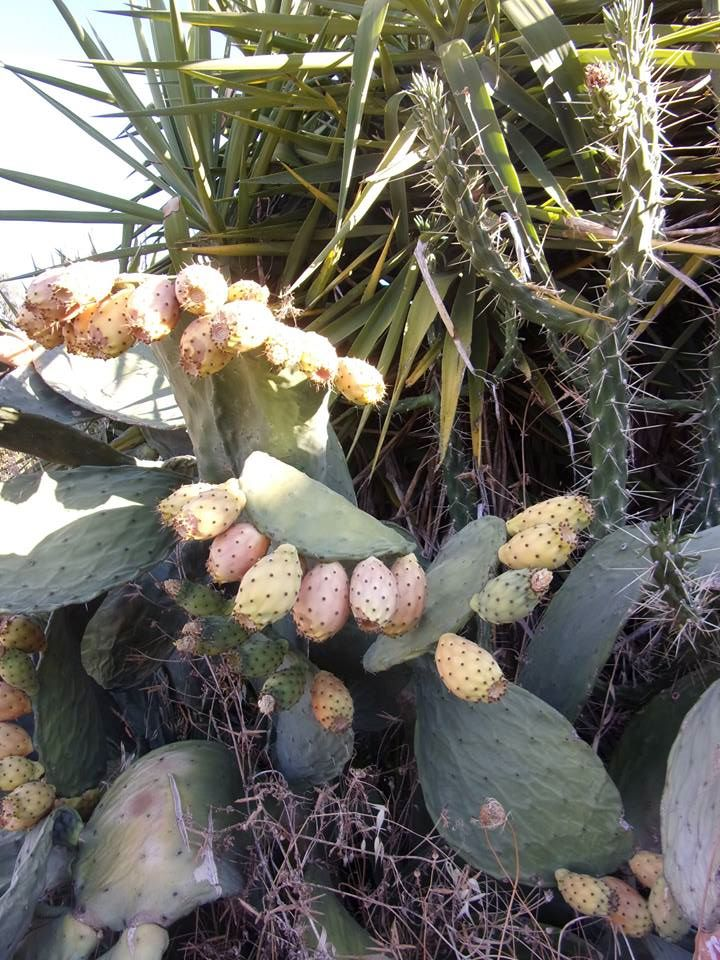 posted 3 years ago
Thank you much for the close up. I shall try to get an identity on it.

I see you are also a few grow zones warmer, that does make a difference on overwintering for many plants. Have you tried the fruit, what do they taste like, and have you tried eating any of the pads? Is that pinkish color as dark as the fruits get when ripe? Thanks again.

Oh, what color are the blooms?
Burra Maluca
Mother Tree

Deb Rebel wrote: Have you tried the fruit, what do they taste like, and have you tried eating any of the pads? Is that pinkish color as dark as the fruits get when ripe? Oh, what color are the blooms?

I'm pretty sure the flowers are yellow - I'll ask my other half to confirm when he comes in.  The fruits get a deeper pink colour when they are fully ripe, and yes, I've eaten them and I love them.  Very fresh tasting, a bit like a cross between a watermelon and a strawberry with hard little seeds, which I just ignore.  Peeling them seems to be a minor art form, and this is the way I eventually settled on.

I haven't mastered eating the pads yet, and they are going to be in short supply this year as I am pinching loads of them to plant along the south facing boundary wall where nothing else wants to grow.  I want lots of these things!

posted 3 years ago
Favorite odds right now are you have Opuntia ficus indica, as the type you are growing. They plantation grow them in your country.  If they are yellow bloomed.

Good eating both ways. Just write down the growing conditions that happened for the last year from when you took those pictures, as that looks like a highly successful combination. (when it was hot, how much water and when, how cold did it get and for how long, etc).
Rhonda Smith
Posts: 1
posted 6 months ago
Why isn’t my Prickly Pear growing fruit but blooms yellow flowers each year?