posted 3 years ago
Jabba the Hutt is a fictional character appearing in Star Wars. He is depicted as a large, slug-like alien. His appearance has been described as a cross between a toad and the Cheshire Cat.

So we had these fat, pink, morbid obese  3" grasshoppers that cannot fly or hop very far.  I have been looking for what kind of grasshopper they are for months.  Found out today!

A popular ... childhood past time before computer games was to harness lubbers to a matchbox and pretend they were horses pulling wagons.

One might expect that lubbers’ abundance makes them an important food source for many species of animals. Some are undoubtedly eaten by predators. But lubbers’ preferred food, members of the lily family Liliaceae (such as our swamp lily, Crinum americanum, and spider lily, Hymenocallis caroliana) and the Smilacaceae (the cat claws of the genus Smilax), contains allelochemicals that make lubbers distasteful to many other animals.

Lubber grasshoppers are not capable of flight. They have two pairs of wings covered by rather short, black wing covers. The anterior wings are yellowish with black dots, and the rear wings, as mentioned above, are red or hot pink and function during communication with other lubbers or to potential predators.

They do not hop long distances like some grasshoppers. They simply amble along feeding and breeding. It is not uncommon to see thousands of lubbers moving across highways where they are slaughtered by traffic. Due to their large size, dark bodies, and slow gait, interstate highway commuters have even mistaken them for tarantulas.

Their value in the ecosystem aside, they have proven to be wonderful kid critters. They are sluggish and do not bite, their size and color cannot help but attract attention, and they are easy to keep in a jar. If you have budding naturalists in your family, take them out to see Devil’s Horses. [They will have] a wonderful day recently watching lubbers by the hundreds and hundreds. What an opportunity to help young minds grasp a higher understanding and appreciation of nature!

Lubbers are paurometabolous (a great cocktail party word) insects, meaning that their immature nymph stages each resembles the adult form. There are five nymphal stages, each called an instar, and each lasts about 15 days before it molts its external skeleton, thus moving to the next instar. They grow to full three-inch long imago (adult) size by midsummer, breed during the next few months, lay one to three clutches of about 50 eggs in two-inch deep holes in the soil, and die before winter.

If you have never experienced the explosion of lubber grasshopper populations, go into the field and observe. It is a real natural treat.

posted 3 years ago
While Lubber Grasshoppers are easy to smash since they don't hop much, other grasshopper can be pests so here are some tips:

"Preventing Problems:  Keep grassy weeds controlled, as they are grasshoppers’ preferred host plants. Encourage predation by wild birds and domestic poultry. Provide a moist, grassy spot far from the garden as alternative habitat. In areas where grasshoppers are a major pest, inoculating the soil with Nosema locustae will help limit populations.

Managing Outbreaks:  Cover susceptible plants with row cover (garden fleece) or cones or covers made from window screening. Allow chickens to forage in the garden for a short period before dark.

posted 1 month ago
Almost fours later, I am still fascinated by these Lubber Grasshoppers.


So we had these fat, pink, morbid obese  3" grasshoppers that cannot fly or hop very far.

For a comparison, this is a regular grasshopper: 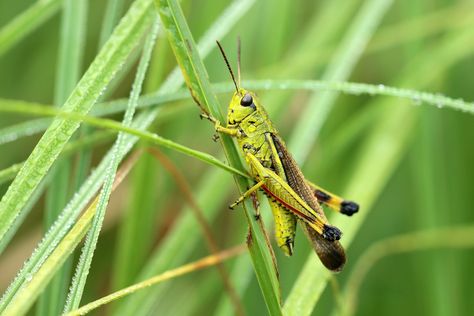 This is a lubber grasshopper: 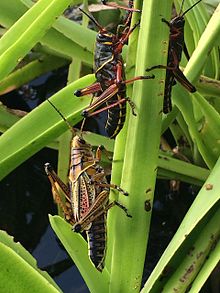 The ones I have been seeing lately are not pink.  They are green and only about 2 1/2".

They are still fun to smush because they just sit there and let you smush them  They were on my potato plants and just let me pick them off to smush them. 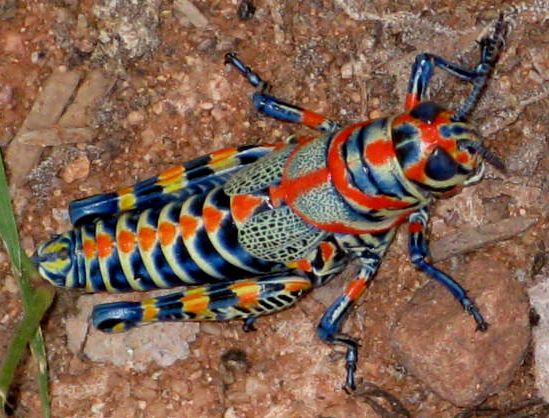 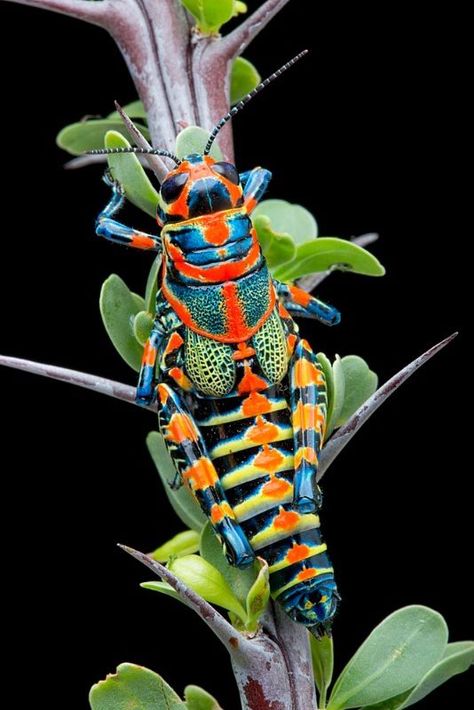 posted 1 month ago
Rather prettier than the largest one I have seen, this is a Bush Cricket it's about 1.5 inches long it's carnivorous and can give a nasty bite if you try to pick it up! 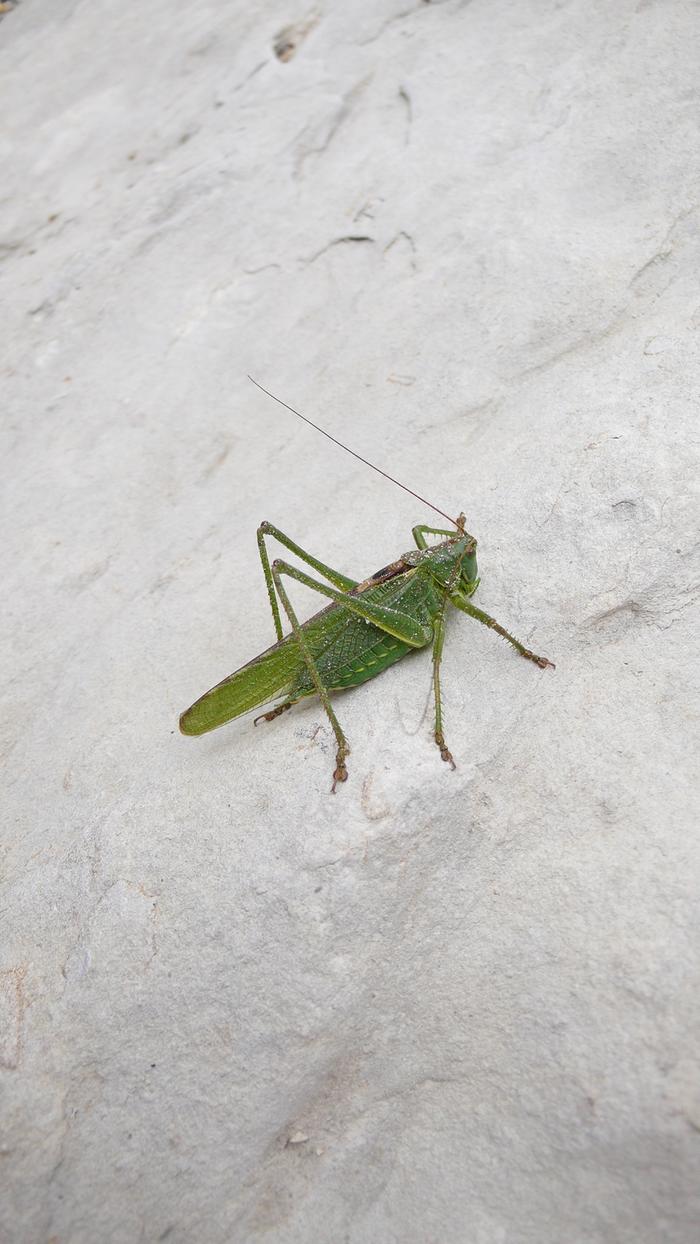 posted 1 month ago
The lubber grasshopper is cannibalistic.

When I smash one, you can see others slowly heading towards the smashed one to eat it.

This gives me a chance to smash more.

posted 1 month ago
Lubbers are also common in Southern Arizona in the grassland and oak savannah ecosystems. They show up with the monsoon, are utter hell on any kind of vegetable and my sister and mom have multiple layers of protection around the summer garden: 1 inch hardware cloth, a DMZ ring patrolled by guinea fowl, then a mesh cage.
T Melville
pollinator
Posts: 253
Location: SW Missouri • zone 6 • ~1400' elevation
64
I like...

posted 1 month ago
Talk of extra large insects always reminds me of giant wetas. They come from New Zealand and I think they may be endangered, so the kids may never meet one. Still cool to know about, though. 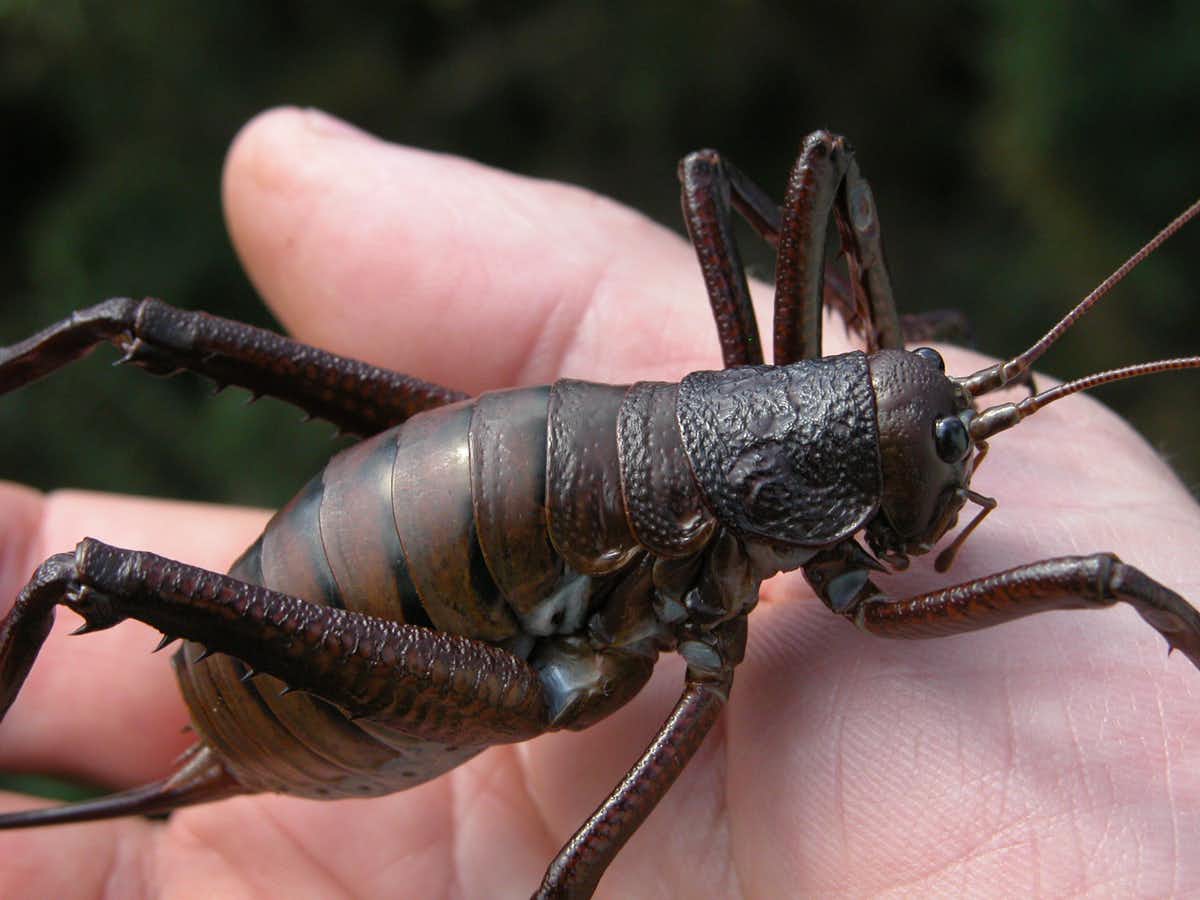 posted 1 month ago
Some weta may be endangered but we've got loads of them at our place. Every pile of wood or brush has at least one. I leave stumps and snags with borer holes and hollow bits as weta hotels. It's also a reminder to keep my rainwater barrels covered, as they're not good swimmers :-(