posted 4 years ago
Hi.  We've got a modest-size polycarbonate greenhouse that we grow early radishes and leafy vegetables in in spring, late ones in fall.  During the main season we grow tomatoes, jalapeno peppers, and cukes in there.

We get a true winter here, in between Zones 6 & 5.  We've tended to retire the greenhouse in late November and not plant much before late March.  I've heard about, but never experimented with, the water-filled-jug thermal mass technique.  I was just browsing stuff on the web and came across this site ("Vicki's Volumes") where Vicki shows her use of black-painted water jugs as thermal mass.  I'm only supposing we could more effectively extend the radish/leafy-growing season more - not thinking the technique could enable us to grow veggies during winter (daily sunlight period is too short, etc)
http://vickisvolumes.blogspot.ca/2012/05/what-green-house-out-of-trampoline.html

I'm wondering if people here have used the method and, if so, how have you found it to work out?  Any tips?

In out situation, with 12" high raised beds on two side & one end of our GH, I think we could distribute the jugs more broadly, rather than massing them as Vicki has done.  But is that a good or bad idea?

posted 4 years ago
I think that the more they are massed together, the less surface area that will be exposed to cooling air as they will share an invisible envelope of warmer air around them in one location.  On the other hand, if they were spread out, depending on your configuration, they might potentially be in better solar exposure positions to absorb solar radiation on their black surfaces.

I'm only supposing we could more effectively extend the radish/leafy-growing season more - not thinking the technique could enable us to grow veggies during winter (daily sunlight period is too short, etc)

This might not be the case, if you plant a late summer/early fall crop of hardy greens/roots.  They go semi dormant during the darkest and coldest periods, but can overwinter and are harvestable all year if protected by a greenhouse, possibly with the addition of internal cold frames, and an extra layer of plastic rolled out at mid elevation in the greenhouse to further trap radiation.

Roberto pokachinni wrote:I think that the more they are massed together, the less surface area that will be exposed to cooling air as they will share an invisible envelope of warmer air around them in one location.  On the other hand, if they were spread out, depending on your configuration, they might potentially be in better solar exposure positions to absorb solar radiation on their black surfaces.


Thanks Roberto.  I see the point about there being less surface area exposed if they're massed together, but of course what we want later in the day and overnight is heat radiation out to the soil, plant roots, and leaves.  We want the heat to be spread somewhat as it's given off later in the 24-hour cycle.  So...?  I'm not sure on that point.

Actually, it'll only be completely settled in a specific GH in a specific location through experimentation.  I just wanted to learn from people here, from their personal experience, if it's a technique worth experimenting with.

Posts: 5656
Location: Cache Valley, zone 4b, Irrigated, 9" rain in badlands.
2239
posted 4 years ago
A couple of springs ago, I grew tomatoes in an unheated greenhouse by surrounding them with cloches, bottles of water, and a floating row cover. On super cold nights, I'd toss a quilt over them. Photos to follow. 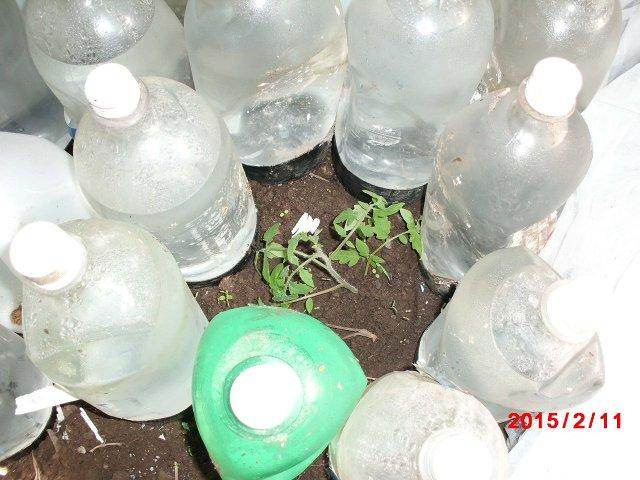 Tomatoes covered with cloches and surrounded by bottles of water. 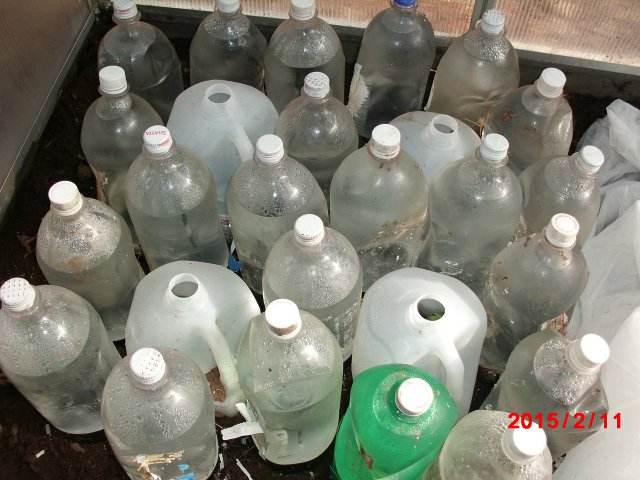 Covered with a floating row cover. 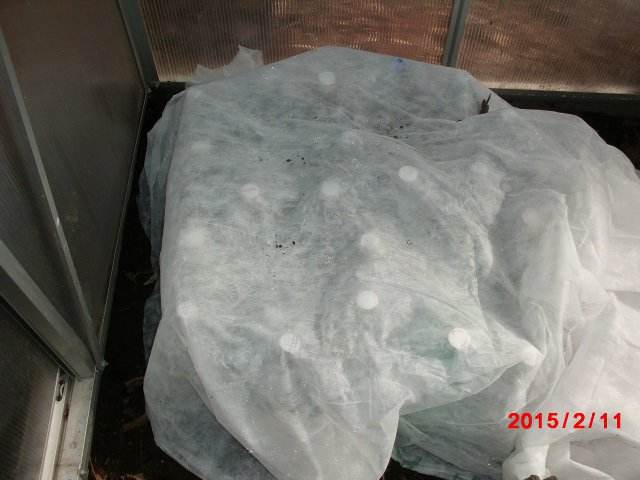 Later in the season. 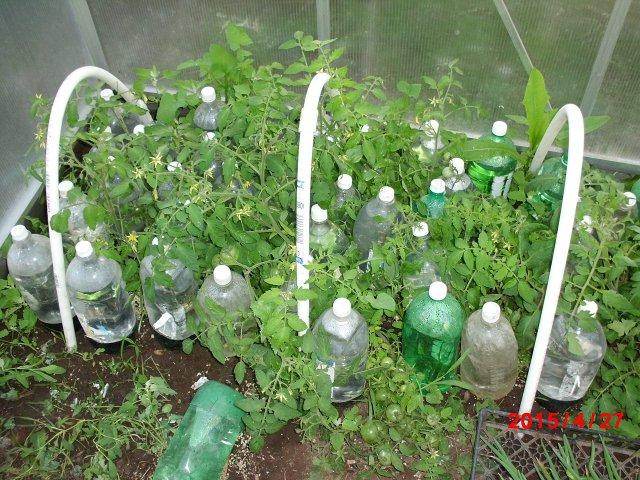 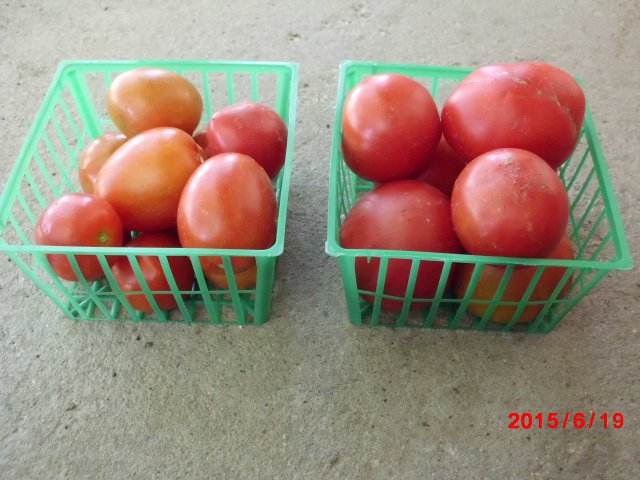 Eric Bee
Posts: 107
5
posted 4 years ago
Been using water as thermal mass for a while. I did a lot of experimentation (replete with temperature probes) many years ago before I started my farm and my conclusions were roughly:

1. I was wasting my time with small containers.
2. Trying to get maximum heat gain into small containers by spreading them out never overcame the loss from the increased surface area. I don't recall the numbers but it was very clear.
3. Clumping together in the GH center was the best combination of heat gain and minimizing loss. This was what led me to the bigger containers.

Now I use 55gal food grade barrels I got for very cheap. They are already a dark grey, and I put them on the south wall of my green house. It's much more complicated to measure the temperature differentials so I didn't' bother, but the water in the barrels easily gets up to 140F and I'd say overall raises the temps at night by 5+ degrees depending on a gazillion variables. It's not optimal and there are many ways I've dreamed up to do this better, but it was dirt cheap and very easy. As the temperatures warm up in spring I put cardboard or whatever is handy between the GH wall and the barrels to decrease the direct solar heating -- then the water takes up excess heat from the GH air and evens out the dips in temp at night.

YMMV. The only way to really know is to measure, which might be very worth your time if you can figure out the optimal arrangement.

Also: there is no reason you can't grow quite a variety of things all winter long in your zone, by which I don't just mean kale. Eliot Coleman (http://www.fourseasonfarm.com/) is usually held up as the example and has some books on the subject (I haven't read them) but much of what he does can be found on some of the more innovative production farms.


Edit: Yeah! Row covers. You can use the stuff sold for the purpose (Remay or Agribon) but it's overly pricy unless you buy in bulk and is, afterall, polypropylene. As Joseph suggests - a quilt or blanket works just as well if you don't mind taking it off every morning. I use row covers in the field so have plenty of scraps and just leave them on during very cold weather -- even AG50 allows like 70-75% light transmission and can give you another 8-10F
Roberto pokachinni
gardener

posted 4 years ago
I don't have any photos of it, but last year my dad and I built a little hoophouse with pony walls below the hoops to raise it up to a comfortable standing height and end walls with a door and window for a little greenhouse that was about 8 feet long and 6 feet wide and in it we had 12 used glass wine carboys that I got a good deal on, each with a volume of I think 4  gallons of water.  We transferred our seedlings from the house to the hoophouse to gain more light (because the room they were in was not well lit), but most specifically because we were running out of room in the house as the seedling were potted up to larger pots.  The carboys were on the ground level, below double shelves which held our seedlings in 4 inch pots.  This late winter/spring transition was very cloudy during the day, but clear and cold at night, so we ran a small space heater in the space on nights that were expected to be really cold, but I don't know if it was necessary.  I think that if the spring transition had been sunnier during the day the heater would not have been necessary at all.

I have had a lot of ideas that have not been experimented with in my northern climate, but one thing that many people do in this area is put their greenhouse floor below grade, so that the glazing comes down to the ground level outside, but the ground outside is also insulating the bedding area.  Some go so far as to add a below grade insulated wall under the edge of the glazing, to provide a barrier between the cold earth outside and the warm earth inside.

Although I might have a RMH in my own design, on my own land I will not be substituting heating with electricity unless I am producing excess, so every aspect of gaining this edge will be taken.   \

As Joseph shows in his post, and I explained a bit in my first post,there are many ways to hold that heat in.  I mentioned cold frames, while Joseph used the bottle cloches for the same sort of effect, and the same with my sheet of plastic mentioned, while Joseph is using some floating row cover.  One video you might want to watch is this Youtube by Eliot Coleman  It's over two hours, but there are a great many insights into this sort of thing there.  I think that it's safe to say, though some might argue, that Eliot is what many would consider to be the foremost expert on this subject.  Of particular interest considering my second post above, is his planting schedule so that he might harvest greens during the winter.

kevin stewart
Posts: 176
19
posted 4 years ago
Hi
I am growing potted plants in trays of water. Kind of a hybrid hydroponics.
In 100° summer the water is 70° (if I keep most of the sun shaded) and in winter only one inch of ice compared to two inches of ice on the goldfish pond.

Last week I took the temperature of the open fish pond: 50° and of a pond covered with plywood and 6 inches of soil: 60°

This winter a solar pump will transfer water from the covered pond (200gallon pit) to a blue barrel in the sun. Once the barrel is full the overflow goes via large pipe to the trays. When the pump stops a pipe at the bottom will trickle flow all night.

I like your bottle idea and I will put gallon bottles around the plants.

I might try plastic covered hoops over each tray.
In this wind and sun a plastic covered greenhouse does not work. I will be picking up shards of plastic in the surrounding square miles for years.

I go to my place once every six weeks so growing is a crap shoot.

Overflow water in the trays goes back to the pond. When it rains on the trays and the pond is full the overflow goes to the fish pond.
I'm starting to realize that I'm a rube goldberg kind of guy.