Robert Johnson
Posts: 14
1
posted 5 years ago
I live in a mobile home and don't have a lot of room for a bench on my rocket stove. So I built this one with the mass standing up. It works better than I thought it would.  I think it actually works better because all sides of the mass is in contact with the air enabling a better convection throughout the room.  I made it like a batch box but it did not draft very well. So I reduced the mouth to an 8 inch.  Now it drafts like a beast! Absolutely zero smoke comes out my chimney now.  My mass is contained inside of 2 55 gallon drum's standing on top of each other. I have 2 15 gallon drums on the inside  with the 8 inch exhaust tube coming down the center all the way to the bottom. I have solid Clay between the 55 gallon drum's and the 15 gallon drums. No cob. The drums  contain the mass nicely. This is my first rocket mass heater. I built a rocket stove water heater last year and it still works like a beast.
IMG_2047.JPG 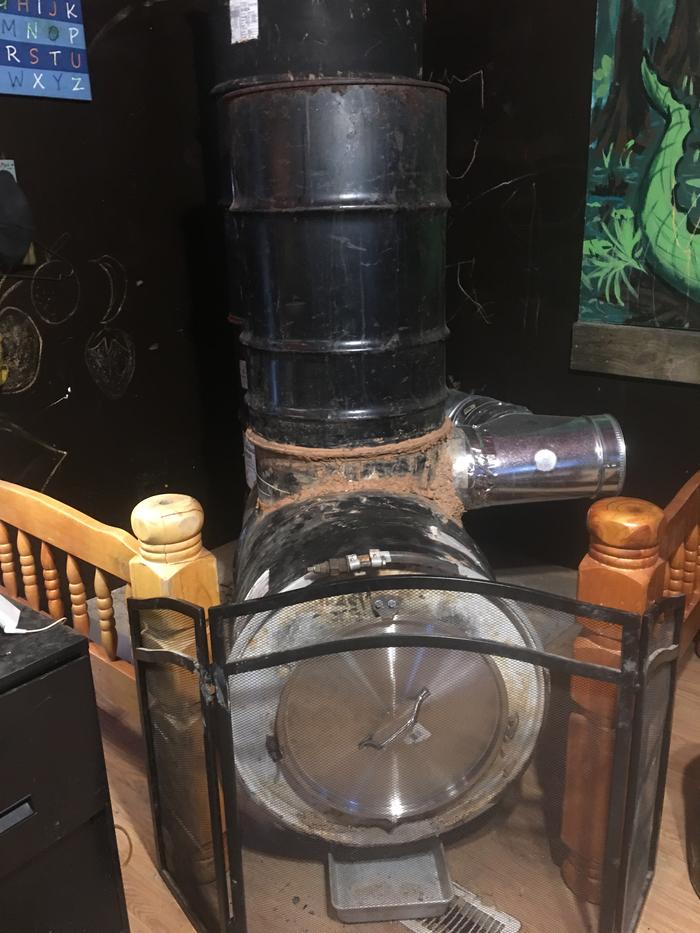 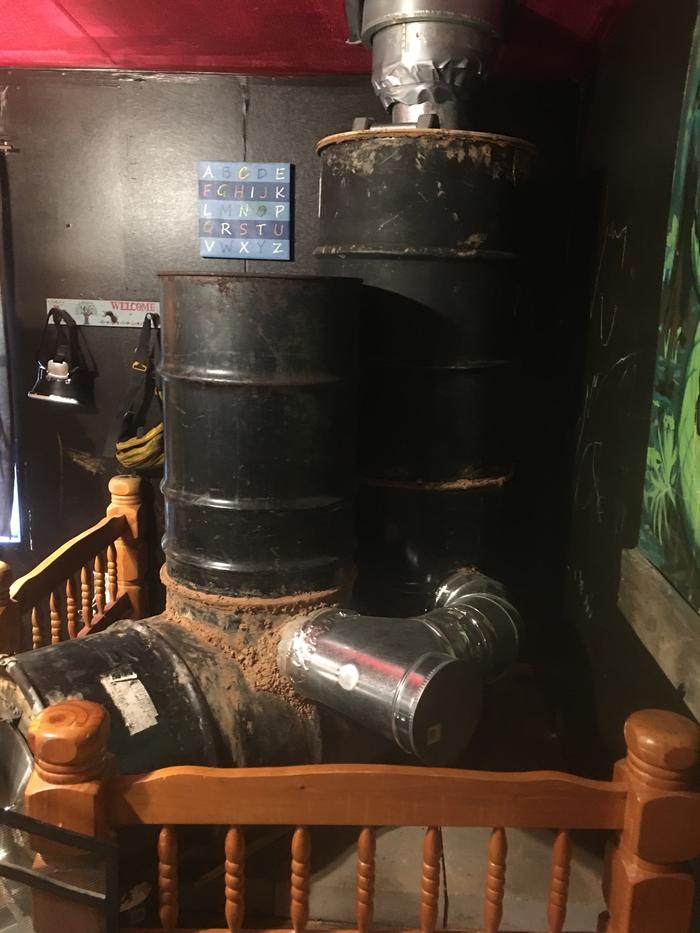 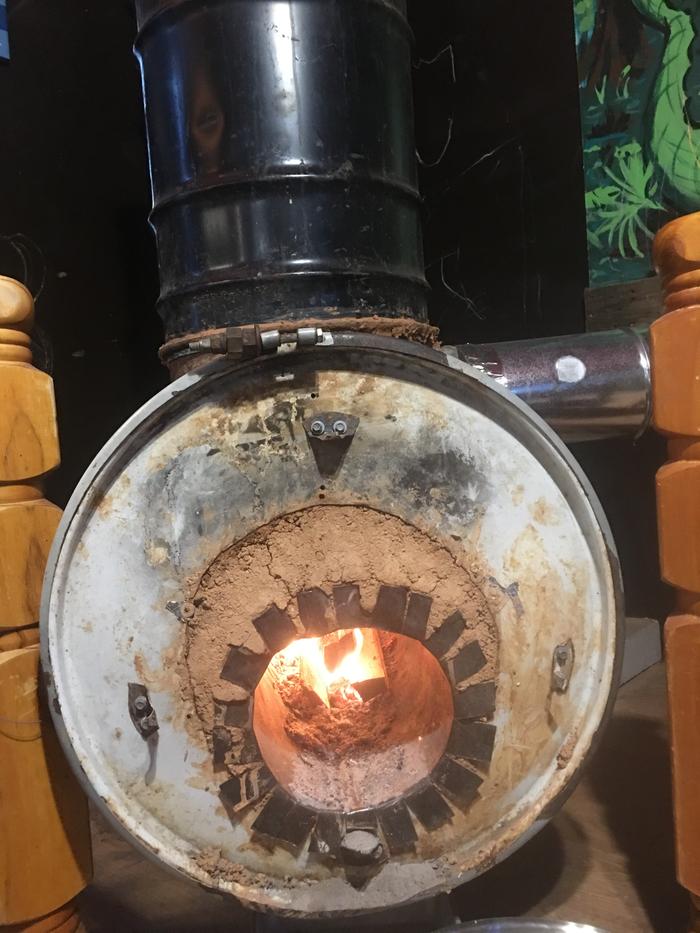 posted 5 years ago
Cool system. I mean that in several ways.  It might be a bit on the cool side if you have only now eliminated smoke.  I might be wrong, but that is my first thought.  I like the idea of the vertical mass for a small space.  Very cool.

Is your reduction from batch box to 8 inch done with clay?  Was this insulated at all?  Did you insulate your fire area? What is your core made of?  When your burn is complete, are you getting some bits of coal or just ash?   Does the system's mass act like a bell, with exhaust coming down the same place it went up?-that's the way it seems from what your described.

When you built your initial batch box, what was your design?  I am curious about batch box designs in general, and I am considering it for one of my builds, but I'm wanting to try to figure out with you why your system didn't draw as well as you would like so I don't repeat the issue in my own design.

posted 5 years ago
Looks like you would be losing a lot of heat from your manifold to mass pipe system.  I bet that gets smoking hot.  Good thing you have a kid fence there, bud.

posted 5 years ago
Is that a stainless steel pot lid that you are using for a door?  Is that an external air intake coming in that looks like a ducted floor vent, or is that just coincidentally right below your door?

Robert Johnson
Posts: 14
1
posted 5 years ago
The original batch box was a 12" duct with the 8" duct connecting and going up through the riser. I think batch box may not be the right word. I think it was just not angled up enough and I found I didn't need that big a burn chamber anyway. When I converted it I just put a 8" elbow inside the 12" chamber and just filled it in with clay and perlite.
No left over charcoal after burns. The core is perlite with enough clay to make it stick together well. The exhaust going from the core to the bell does indeed get hot but not dangerously hot. Still, I plan to insulate it with rock wool, but it just adds to the radiated heat. I don't have cad but I have attached a drawing of the system. Sorry it's crude. I'm at work.
And yes that's a badass stainless lid I got off Ebay and I just keep a gap open at the bottom so that air comes in and cools the lid on its way to the fire. And yes it's just a coincidence that vent happens to be there. 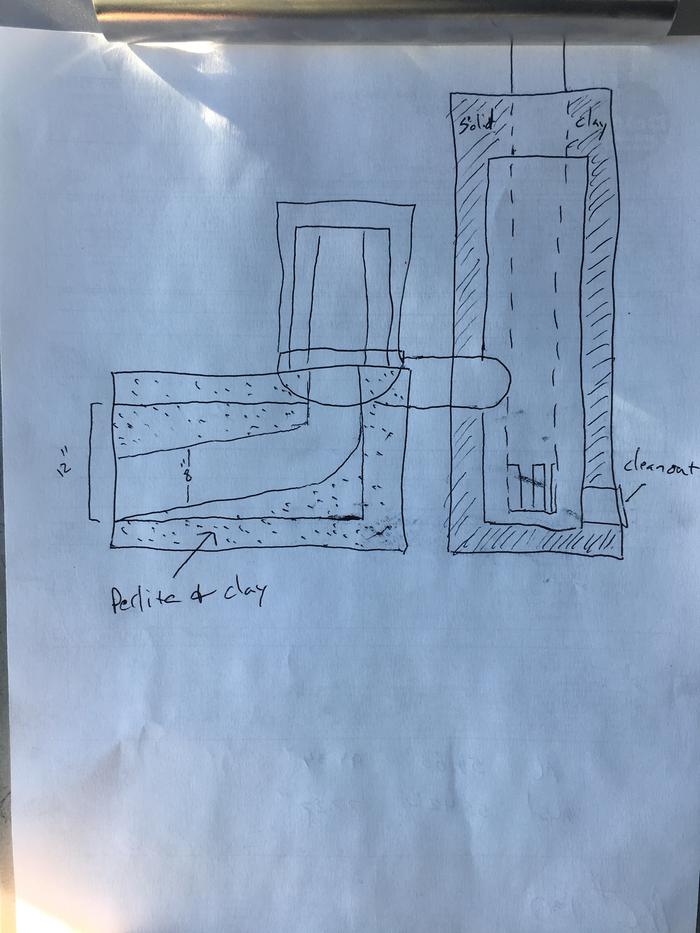 Posts: 3666
Location: Upstate NY, zone 5
253
4
posted 5 years ago
A batch box has a very specific set of dimensions and characteristics. What you first built was just an extra big L-tube, with the firebox twice the size of the rest of the system so that it had lazy draft and let a lot of the wood sit buried in upper coals and not getting oxygen. Reducing it to 8" cut the firebox area to less than half, so more than twice the draft speed, and better oxygen exposure.

Your bell system is apparently effective (how hot is the chimney exhaust out the top of the bell?), though I think there are some ways it could work even better.

If you put the two barrels with mass on top of the combustion chamber and riser, I think it would work at least as well while taking significantly less floor space.

The exhaust plunger tube occupies a lot of the bell volume, and there may not be enough internal space left for the bell stratification effect to fully manifest, plus the plunger is passing through the hottest part of the bell and picking up extra heat and taking it straight outside. Running the chimney out the bottom side of the bell just like you did with the first barrel would be more effective, and that pipe would be cool enough to not be a serious hazard. With a larger duct around it stuffed with rockwool, it should be entirely safe.

Lastly, a J-tube or a batch box would be more efficient at combustion than an L-tube, according to experimenters who have sophisticated testing instruments. I wouldn't advise you to scrap what you have, but if you decide to try another version, a 6" batch box which would only stick a foot or so out of the side of a two-barrel stack would give the same heating power as your current 8" system has, in a significantly smaller footprint. Three barrel batch rocket, which could be done as a two barrel mass heater design with the firebox set lower and cob lining the barrels. The 6" batch box would only need 6" exhaust/chimney ducting.
Glenn Herbert
gardener

Posts: 3666
Location: Upstate NY, zone 5
253
4
posted 5 years ago
A minor but relevant point: the vertical mass is probably not working better for your space because it gives more convection, but because its sides radiate better than a bench to all parts of the space within sight. The hottest part of the bell being near the ceiling would actually reduce convection since hot air there has nowhere else it wants to move to.
Robert Johnson
Posts: 14
1
posted 5 years ago
Yeah I was pretty sure it wasn't a batch box but I didn't know what else to call it. L-tube didn't seem right at the time. The exhaust leaving the top of the mass is not hot. Warm is more like it. I can put my hand on it and keep it there without pulling away. So I think it's efficient enough for this little house. We are in Texas so it will be fine. Yes I agree that a J-tube works better but I'm a truck driver and am at work a lot and I need it to be as simple for my wife to use as possible. So far there has been zero back smoking. It was a very fun build and my wife says it looks like an old style steam engine. I was thinking of putting a scoop on the front to  accentuate that motif further.
As for convection I believe the airflow travels up the length of the mass from floor to ceiling and then is pushed away along the ceiling until it dumps its energy and sinks down to floor again back towards the low pressure zone near the base of the mass and then repeats the process if I am thinking correctly. Been a long time since high school physics class though  L😂L
Glenn Herbert
gardener

Posts: 3666
Location: Upstate NY, zone 5
253
4
posted 5 years ago
With this further information about your circumstances, it sounds like you'll be fine. You could make the system significantly more compact, but if you and your wife are happy with it, excellent!

The balance between radiant and convective heat is complex, with most any system having some of both, so there is no telling without sophisticated testing which is dominating your system. The lower the surface temperatures, the more radiation occurs compared to convection, as far as I know.

Robert Johnson
Posts: 14
1
posted 5 years ago
I tell ya I am addicted to this stuff now. I'm already trying to rationalize building another one now. Maybe one just for cooking now......