Shaving for cheap without waste

posted 4 years ago
I started shaving when I was a teenager. I started out with disposable razors and it seems I could use them for the longest time because my beard was not very thick.

Then I moved on to Mach3, where you keep the handle and just change the blade cartridges. I think I could get 15 cartridges for about $35 and I would try to use one for 2-3 weeks. By the end, the blades would be pretty blunt and would irritate my skin quite a bit. The cartridges were expensive and involved a lot of plastic. They came packaged in a lot of plastic and most of the material they were made out of was plastic.

I tried an electric razor for a while and it was a disaster. It was not shaving close enough for my liking and it would irritate my skin every time I shaved. I gave the electric razor away and never went back.

From the start, I was using foam shaving cream sold in aerosol cans. I tried different brands and types. All were fairly expensive and would not last all that long. Again, there was a lot of waste.

About 8 years ago, I made the first change to my shaving system. I started using a shaving brush and shaving soap. That was a big improvement over the aerosol creams. I initially bought a fancy kit with a pottery container, which I still use.

That part is totally unnecessary and a mug would do. When I ran out of the round shaped soap made for the pottery, I just started using the unusable chunks of soap from the bath and from washing our hands. We used to throw them away, now they get used to the end.

The original pottery shaving kit came with a shaving brush, which lasted about 2 years. The one I am using now has lasted probably about 5-6 years and I cannot remember how much I paid for it, but you can get fairly cheap one on amazon (amazon.ca). I also have a spare one that I got new for $0.50 at a garage sale.

The next improvement was about three years ago when I started using a safety razor. I had tried straight razor, but my sharpening skills were not sufficient to get it sharp enough to shave. I might go back to straight razors later. I went for the Merkur Long Handled safety razor (amazon.ca)

with these blades (amazon.ca): 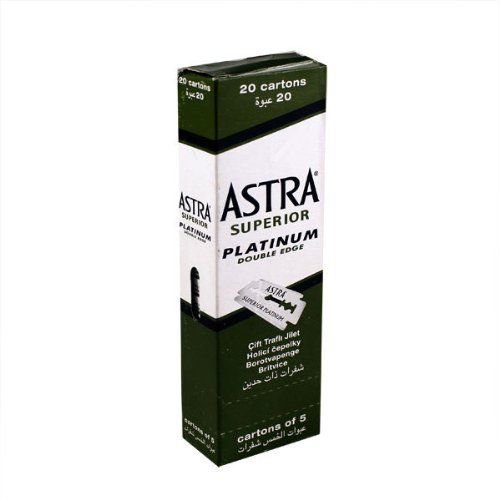 I bought 100 blades in 2013 and I still have many left. It is about $0.15 a blade and they last 2 weeks. One week per side of the blade. It was a bit of an adjustment to use the razor at first because it is a bit bulkier than the plastic type, but after a few shave I was completely used to it and I would not got back to the "modern" alternative.

The last improvement I made to my shaving system was to use boiling water in a mug. Our washroom is far from the water heater and it was getting irritating to waste water waiting for it to be warm enough to shave, so I decided to start using boiling water. When I get up, I fill up the electric kettle and put it on while I shower. By the time the water has boiled, I am out of the shower ready to shave. I dip the shaving brush in the mug before I lather the soap to put on my face. I dip the razor in before shaving. It doesn't take too long for the blade to cool down enough so that I can touch my skin. I also use the water to get the blade cleaned while shaving. I usually unscrew the head of the razor slightly so that I can get the soap and hairs out.

I used this system off-grid too. I ended up boiling the water before going to bed and putting it in a thermos overnight. I guess I could do the same at home.

So, there was a bit of an initial investment to get the handle and the blades. I paid about $35 for the handle, $11 for the blades that will probably last me 4 years. Let's say the shaving brush cost me $12 and can probably last 5-10 years. The mug and soap can be obtained for free-ish. Once I have the handle, I can shave for $3-$4 a year, since the cost of the handle can be amortized over a lifetime (or many). The quality of the shave is also much much better and does not irritate the skin as much (if at all). The amount of waste is reduced to the blades, which can be completely recycled.
John Suavecito
gardener

posted 4 years ago
Great idea, Adrien.
After our last discussion, I gave myself the same razor for Christmas. It just makes so much more sense.  I had been using the cartridge refills on my atra for more than a decade, but now they want $20 for the cartridge replacements. I was just thinking that there has to be a better way when I looked up your article.  It's like a gentle revolt against too much unenvironmental excess packaging and only allowing expensive formats.  I can't wait to use it, but frugal SOB that I am, I am going to use up my old Atra cartridges because I don't think I'll be using them anymore.
John S
PDX OR

posted 4 years ago
Keep your razor in a jar of witch hazel or rubbing alcohol. It'll last for months or longer. If it's a fancy razor with rubber parts, it might distort the rubber. Plastic parts are fine.

posted 4 years ago
So as a followup, I've been using the safety razor. No more cuts, but you do have to be careful about the angles a bit more. Nice to not be locked into one corporation that controls you.

I went to the hardware store on my bike to find the replacement blades. It's a different kind of blade. They said try a pharmacy.  Rite-Aid had them for a reasonable price (Daylogic 2 sided, 15 of them for 7.99) amidst the shockingly expensive plastic cartridge style ones.  One was $40 for one replacement blade.  I took off my glasses. Yes, that was the real price so you could pollute a lot more!  I checked online. Aliexpress had them for shockingly cheap but they had only 2 reviews on Better business bureau. Both were angry at being ripped off. Next.

Razorsdirect had them for very cheap 100 Winn Dixies for 18.99. Then I noticed Gillette a couple bucks more and a name brand to protect. No bad reviews on better business bureau.  Sounds like the best deal.  We'll see.  Good luck. It's got to be way better than the plastic expensive polluting kind.
John S
PDX OR

posted 4 years ago
John, which razor did you get?
John Suavecito
gardener

posted 4 years ago
Same one as you. Merkuhr long handled one. I like it.

I was a little worried because I hadn't used this style for 35 years or so, and even then maybe 3 times.   But I like it, and mainly I like saving money, reducing pollution, and reducing corporate control of my life.
John S
PDX OR

posted 4 years ago
My husband and I both use a safety razor/brush/disposable blade. Love not having to spend $$$ every couple weeks on the expensive heads of "regular" disposable head razors like the Mach 3, along with not having all the plastic packaging that comes with them. It's been several years since we bought blades and we still have a bunch. Cost effective and much less waste.