putting a porch on the side of a corrugated metal building

Tom Strode
Posts: 37
posted 4 years ago
Back when I ordered my metal building I talked to the engineer at the plant that makes them. I mentioned that I was thinking of putting a porch on the side of it. He stated, very flatly, that that's impossible. You can't match the contour. Okay, I don't bother to argue with engineers. When the well came in dry and I had to go to roof catchment for water I went ahead and put a porch on so I'd have a place to hang the gutter. That was 8 years age, or there about's. I was a little worried about the joint holding since we get some intense winds here and I was afraid there would be to much movement. I did have to go over it every year or so for the first few years. Very minor fix ups. . . the water coming in was from higher up where that engineer assured me that the joints would be tight.

Anyway, something on one of the other forums jogged me into thinking that someone else might be interested in how it's done. I didn't take pictures while I was doing it but if anyone wants to know more let me know and I can the process.

Tried putting in a picture of the building but the Img button asks for a URL, just like the URL button next to it. I tried attaching it but I don't know how it will look.
bldg.jpg 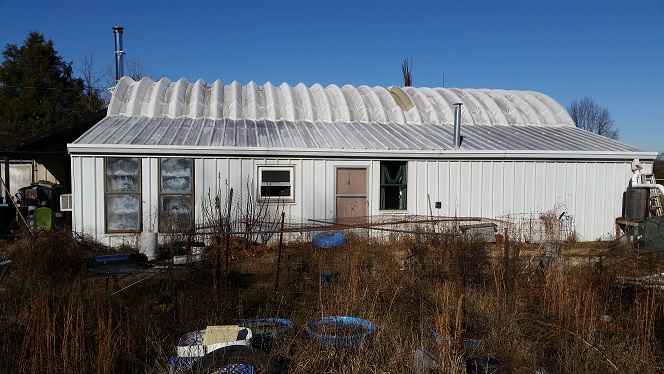 How did you match the contour?  Just cut the porch roofing to match as closely as possible and then caulk the crap out of it?  Are your porch rafters attached to the arch with a ledger board?

Tom Strode
Posts: 37
posted 4 years ago
I "scribed" it in using a batten to transfer points. You can get very good accuracy that way. The pitch of the porch roof running into the curve of the building throws you way off if you try eyeballing it. It was a technique I had used in boat building to cut a bulkhead to fit a curved hull. This was just a little more three dimensional since I wasn't coming in at 90 degrees to the curve. I was working alone and cooking up there in the sun so I did a pretty fast and nasty job but I was rarely more than 1/2" out. There is probably a YouTube video showing the technique but I didn't see one, running a quick check. I only checked about 20% of what came up for "scribeing". I can give more detail if you need it, or maybe make a video if I can't find one.

I bolted upright 4X4's to the building every 10' and ran a beam between them to support the weight, so the porch is it's own structural building that's bolted to the main building. I put a lag bolt through the wall into the butt of each of the rafters to hold them to it.

Ame's makes a super flexible tape and some waterproof sealer to put over it that can hide a multitude of sins. The building does have quite a bit of movement in the wind. It took a few of years for everything to settle in. I went over it with another layer of tape and sealant the second year and have mostly just touched up since.

I didn't know that it could be done when I started. Now I have proof that it can work and that is mostly what I was putting out there. I would have really like to have known someone else had done it successfully before I started.
Mike Haasl
master steward

posted 4 years ago
Cool, thanks for the added description.  Good solution!