The importance of fire in the West and are any permies including it in their practices.

Lynn Garcia
Posts: 39
4
posted 4 years ago
Fire is something that seems to be missing in many of the permaculture projects I see in the dry Western US. It is such a major part of the ecological cycle of the West which has been discouraged for decades by federal and state land practices. Without it we see mass proliferation of fire prone tree species in enormous tightly packed stands that burn fast and hot when the conditions are right.  These species have grown because the original fire hardy species like Cedars Ponderosa etc have been logged without replanting. These fire resistant species tend to grow with more space between them and so they take up more land per tree, but at the same time the fires that burn through just clear out undergrowth instead of entire forests. It is also a major factor for grassland health in the semiarid plains as many of the native species of grasses and forbs rapidly return to fire scared areas and gain a significant boost from the burnt material.

So I am wondering if any permies are using controled burns on their lands as a method of land management or even a way to provide disturbance to reset their land for new plantings. Perhaps I just haven't searched deep enough. I know some use biochar, but their methods are not what I am talking about as they seem to mostly use fire place or campfire ash.
Joseph Lofthouse
steward

Posts: 5547
Location: Cache Valley, zone 4b, Irrigated, 9" rain in badlands.
2175
posted 4 years ago
I generate a lot of twigs from pruning trees and dead branches falling out of the shade trees. My strategy is to burn them over areas of the garden that are highly afflicted with rhizomous weeds. It helps to eliminate the weedy species. I may also pile annual weeds that have gone to seed in the burn location. It's nice to have a weed free section of garden, no matter how small.

posted 4 years ago
I am not from the west, but I use Spring burning on some of my pastures if it has a high level of dead thatch from the year before.
Devin Lavign
pollinator
Posts: 1047
Location: Pac Northwest, east of the Cascades
294
I like...

posted 4 years ago
Difficult part of trying to do this is in areas where you would really want to burn there are often regulations against doing so. Or regulations limiting burns quite a bit.

Also while controlled burns sound good in theory (I am actually an advocate of controlled burns), they can easily get away from you if you don't know what your doing. If you start a burn and it gets away from you and spreads to neighboring land you can be held financially and criminally responsible.

If you remember the big to do in OR with the stand off, the family who was the focal point of the original protests were in their situation due to 2 illegal burns they did. I am not wanting to get into the politics of the event, just pointing out the legal repercussions of burning. That event got national coverage unlike the thousands of smaller cases of ranchers and farmers in the west who get penalized for burns.

Is burning a good practice? It can be if done properly. Should people do burns? In general I would highly suggest folks limit their burns done by themselves to very small and do plenty of research ahead of time of the legalities. I would suggest actually finding professional people to come in to help with any large scale burns, like clearing dead wood from a forest. There are some groups who do do this. They are often a traveling business, who can range many states as the optimal fire season changes region to region.

The big take away, is before even considering a burn look into the laws of your area. Find out what you are legally allowed to do and what you aren't. Using fire to manage your land is not worth you loosing your land or even your freedom over.

We call them "out-of-control burns" here.

Lynn Garcia
Posts: 39
4
posted 4 years ago
I do know that you require permits to do so. In Montana there are specific times that they are allowed with permits and during droughts there are no permits are given. The amount of land I will be moving onto I will never have a reason to use this. I was just curious if others were doing so. Most of the state of Montanas attempts at this have been blocked by logging interests over and over even in the wilderness areas they can't log. The problem is only getting worse though since the methods logging companies are using aren't actually improving forest health as they so often claim. The millions of acres of beetle kill in Montana are going to burn like mad in the next drought and most of it isn't of much use to the building industries.

What I was thinking and apparently cut from my earlier post is that people who have land which is forested would be wise to plant fire resistant species while slowly removing the torch trees from their property.  This would give them a much more resilient forest in the future. Especially considering how many are now moving out into the thick forests out here, and how often those houses burn to the ground when the droughts come on.
Tony Davidson
Posts: 19
Location: Tonasket, WA
3
posted 3 years ago
I burn very carefully. Typically I don't burn much more than a four foot diameter brush pile when there is snow on the ground or one tenth of an acre of grassland very late in the fall or early in the spring.
In fall 2016 Wenatchee and Okanogan national forest did more prescribed burns than normal, which I appreciate. The current  white house wants more spending on military and less on agriculture, slowing forest health projects on national forest. Most forest service or department of fish and wildlife employees that I talk to feel that low intensity fire is a force for good, they just need more public support and funding to prescribe burn.
I don't have a forest, more like a grassland that has patches of trees growing back after logging, a fire and unmanaged goat browsing. The patch of small trees shown was thinned to less than half the original number and the lower one third of tree branches were removed. Since I have plenty of grassland, I spead tree branches and stumps evenly on the ground to build soil organic matter instead of burning it.
A helpful website for learning how to protect homes from wildland fire is www.firewise.org.
An in depth book about wildland fire ecology is Fire Ecology of Pacific Northwest Forests by James Agee.
IMG_0044-(640x480).jpg 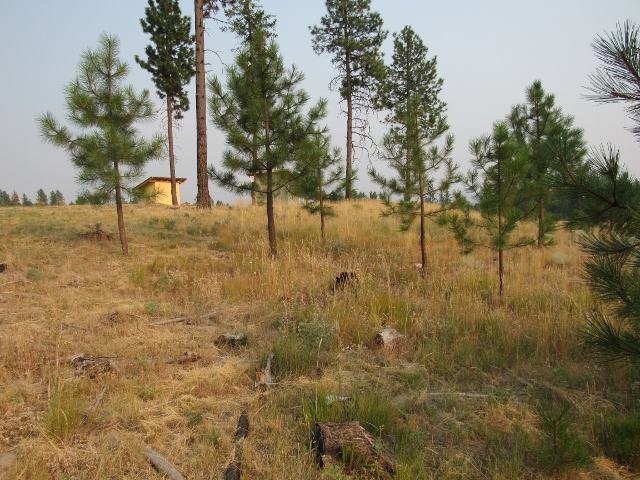 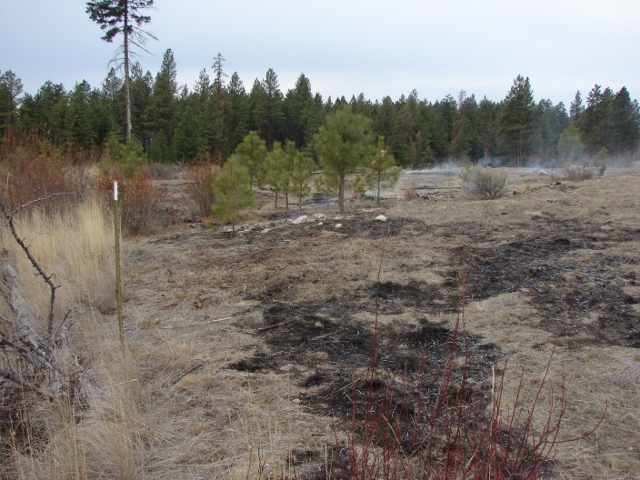