posted 5 years ago
Just watched this video, it seems like a good idea when there is some leftover roast.

I would think one could substitute the clarified butter with lard or tallow.
Ellie Strand
Posts: 40
Location: Eau Claire, WI
5
I like...

posted 5 years ago
Very interesting. Thanks for posting it.

Dan Schubart
Posts: 6
3
posted 5 years ago
Reminds me of rillettes from central and SW France (See Paula Wolfert's tome on the Cooking of Southwest France). Did this with duck and with port and it was tasty and kept well.
Wyatt Barnes
Posts: 318
9
posted 5 years ago
Sorry but I didn't understand the term " leftover roast ", I am not sure I have ever heard that said.

Adrien Lapointe wrote:Just watched this video, it seems like a good idea when there is some leftover roast.

I would think one could substitute the clarified butter with lard or tallow.


Also these 1/4 cup mason jars look like they would work...No rubber seals so they aren't good for canning but should be fine for this...

Anyone know where to get the rubber seal lids?  You could just CAN em...

Lee Kochel
Posts: 37
posted 5 years ago
I follow this guy and find his presentations interesting.  But in this case, I have some concerns.  First, in removing the gristle and the fat he is removing a lot of the food value of the meat; only then to follow this with pouring clarified butter (let's face it beef fat) back over the meat.  Isolating the pieces of roast in the little pots and cooking them with the rest of the roast would have eliminated a lot of fingering and used its own nutritional fat.  Second, since it must be well cooked and then recooked there is a good chance that most or even all of the food value of the meat would be wasted.  Real (pastured beef) is best eaten and digested rare for full flavor and nutritional value.  Beef cooked this way will even "keep" for a few days and even longer if refrigerator or winter conditions are available.  Pasteurization is (in)famous for turning food into junk.
Robert Drnek
Posts: 1
Location: Western Pennsylvania
posted 5 years ago
While pasteurization does destroy much of the vitamins the fats and proteins would stay intact.
Corrie Snell
Posts: 89
Location: San Francisco, CA for the time being
9
6
posted 5 years ago
I have a lot to say on this, and here I go!

Reminds me of rillettes from central and SW France (See Paula Wolfert's tome on the Cooking of Southwest France).

And he is exactly right.  In France, rillettes are still a common food and you'll most often find them made of pork or duck.  I think that "potted meats" are still somewhat common in Great Britain, too (although I'm not sure).  I first found out about rillettes as a "starving" pastry student (NOT!  Read: on a tight budget) in Paris back in 2005.  One day at lunch time, I walked into my neighborhood boulangerie and looked over the baguette sandwich options.  The cheapest one was labeled "rillettes," but I had no idea what it was.  Broke as I was, and wanting to try lots of new things while in France, I bought one, and hoped it would taste good.  I walked to the park, sat down, and took a bite.  HEAVEN.  The pork rillettes sandwich was studded with whole cornichons, and the contrast of the vinegar and crunch of those cornichons against the smooth, salty, fatty meat was perfect.

I've since seen rillettes at fancy shops in the US, too.  They have been made of anything from Salmon (done with butter) to duck (done with duck fat).  Potted shrimp (also done with butter) is something I've seen recipes floating around for, and is done in the same spirit, but the shrimp meat is minced, as opposed to shredded.  So, I guess any protein, shredded or minced, and mixed with either its own fat, or if it's lacking enough of its own, a delicious fat like butter, can be potted and preserved in this way.

Yes, one could do this with a leftover chunk of beef roast, but an even more economical idea is to use this method to get every last morsel of meat off bones.  Last year, I was able to fulfill a dream, and live in SW France for 5 months.  I immersed myself in the cuisine of the region, Paula's book under my arm.  On two separate occasions, I ordered 5 whole ducks from local foie gras farms, and here's what I did with them:  All the skin and excess fat was rendered.

Meanwhile, the legs and wing drummettes were salted and spiced, and left to sit overnight.  The next day, excess salt and large spice/herb chunks were brushed off, and together with the hearts and gizzards, the whole legs and the wing drummettes were simmered very slowly in the duck fat until cooked through, and extremely tender.  These items are then traditionally stored in a crock buried in the ground, or down in the cellar, left covered and sealed from the air with all that fat.  It's called "confit de canard," which means preserved duck.  In French, the verb "confire" is used to describe the preserving process of not only meat, but also fruit (candying) and vegetables (pickling), according to my Oxford French dictionary.  In fact, "confiture" is jam/preserves.  I digress...

From these two batches of 5 ducks, the breasts were removed, skin left intact, and frozen for the future to be cooked and eaten like steak: medium rare, but could also have been salted and smoked, and then served sliced thin like salami.  I ordered the first batch of 5 without their foies (livers), as I was not prepared to deal with them.  The second batch, ordered about two months later, towards the end of the foie gras producing "season," were ordered with foies, and I slipped the whole, fresh foie into its own, individual canning jar, and then processed them.  In France, these are lovingly squirreled away for at least a year, but preferably a couple of years, to mature to peak flavor, and then consumed as a very special treat during the holidays.

So, what are we left with?  The feet, the heads (the tongue is also a great delicacy in France, preserved as with the legs/drummettes/hearts/gizzards), the other various innards (which were not given to me), and the carcass.  The first batch of five was ordered semi-processed, and came with the meat cut from the carcass but left in one big piece (breasts and legs, with skin attached), like the duck took off a big coat.  The expertly butchered animal had little meat left on its carcass.  The second batch, from a different farm, was processed only to the point of removing the innards, and although I have a fair amount of experience breaking down poultry, I certainly left more meat on the bones than the pros at the first farm.

I guess the feet and heads could be given to the dogs.  There is a famous château in France called Cheverny (the Mona Lisa was hidden there during WWII!), that is still "in the family" today.  The viscount loves to hunt, and has a pack of about 70 hunting hounds.  Visitors can watch the hounds being fed.  This incredibly well-trained group of dogs stands back while the trainer pushes a wheelbarrow full of whole ducks (heads, feet, and all) into the center of their kennel area, and dumps it out.  All the while the dogs bay hysterically.  The trainer gives the command, and the dogs GO FOR IT.  For a few seconds, it's a ball of dogs, a swirling cloud with legs here and there, and fur flying everywhere---just like in a cartoon!  And then each dog, with its morsel of duck, retreats to as secluded a spot as it can find, to gulp it down in another couple of seconds.  Anyway, my point is, dogs don't need dog food, and the heads and feet need not be wasted.

Now, back to the main point.  The carcasses, I broke apart as best I could, and shoved them into a very large stock pot, along with a few aromatics (fennel bulb, carrots...), and filled with water.  I slowly brought it to a simmer, then reduced the heat to keep  the water at the gentlest simmer possible, and let it go until the meat was cooked and tender, NO FURTHER.  It's always been my understanding that meaty bones are best when making a stock.  The meat adds flavor, the bones add minerals, the connective tissues add body.  So, to simmer these carcasses for hours and hours, in order to make a flavorful stock (the meat left almost flavorless), is not what we're going for.  Once the meat is cooked and removed, however, the bones can be further simmered in that same water (which will be already be on it's way to becoming stock).

I sat down at the table with these 5 warm carcasses, and listened to TV while I hand picked all the tender meat off the bones.  I thought, "this is going to take forever!," but it really wasn't too bad.  After adding a splash of broth, some rendered duck fat, salt and spices, I ended up with over 4 pounds of delicious duck rillettes as a reward for my efforts!!!

While rillettes of all kinds are delicious enough to devote whole cuts to, I think they really shine as a way to practice nose-to-tail eating. 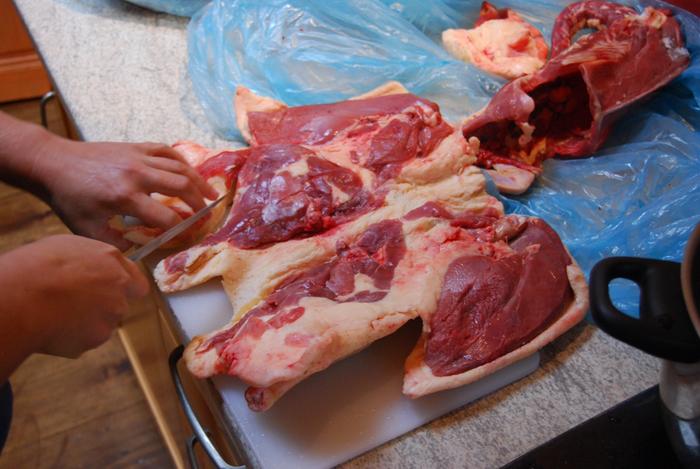 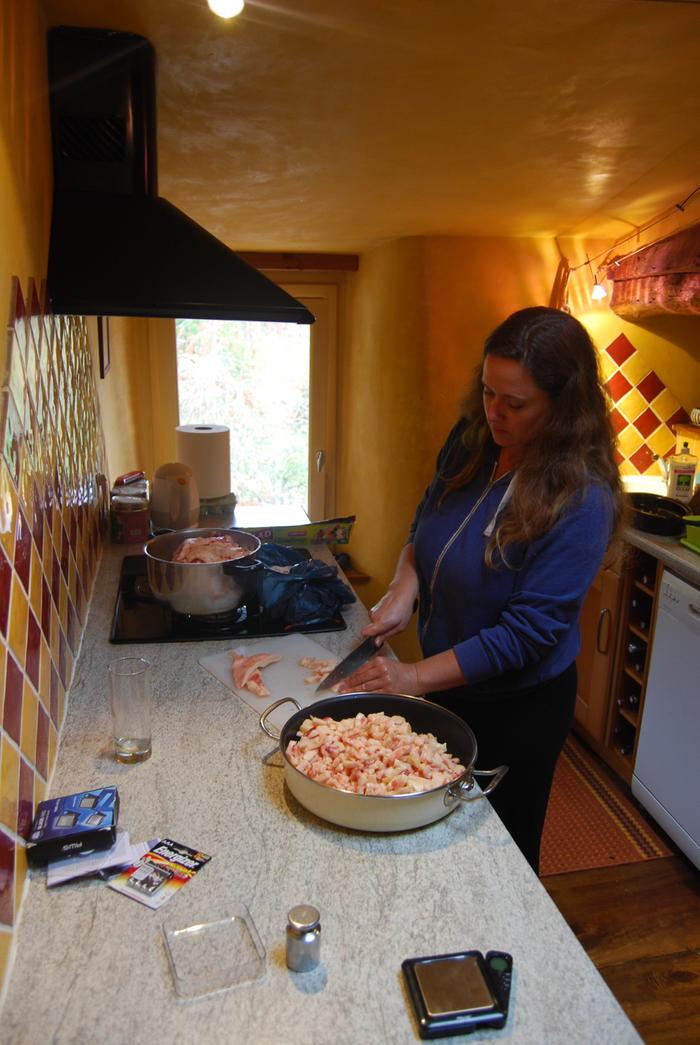 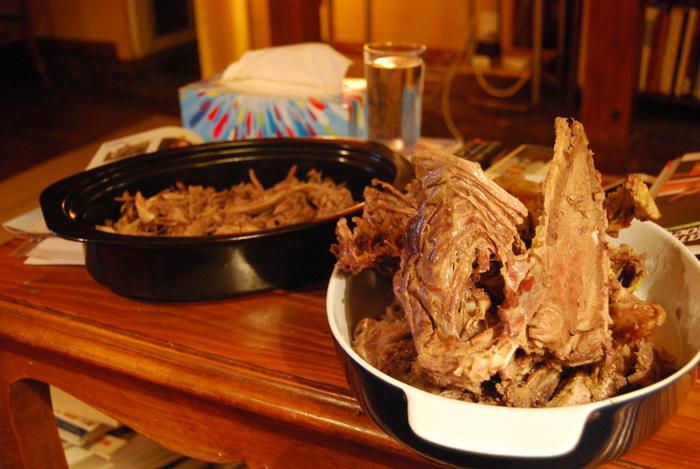 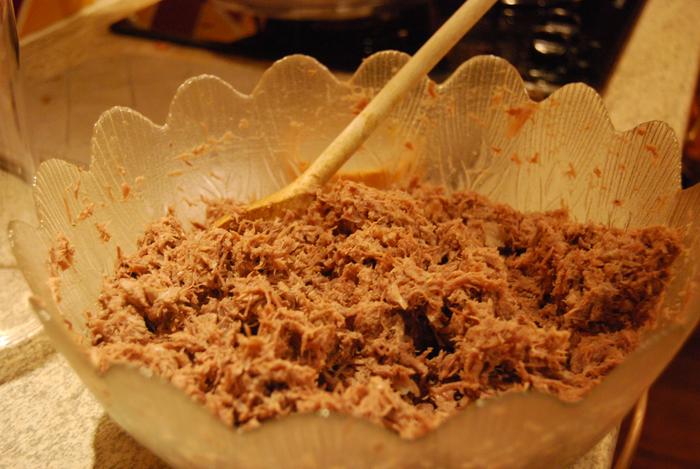 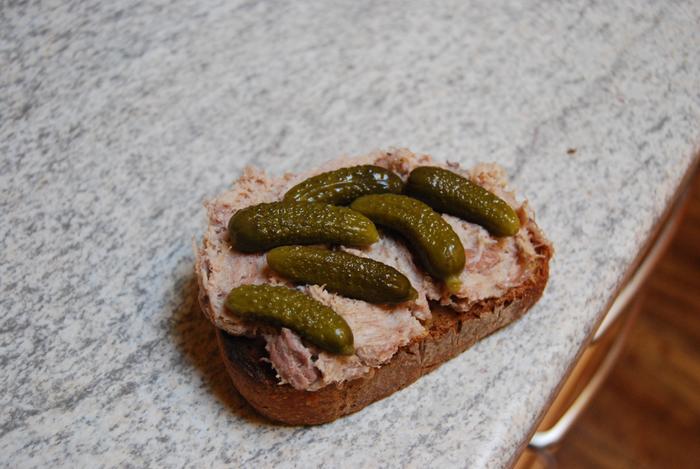 posted 5 years ago
OMG I love rillettes ❤ now my mouth is watering!

I am often left with a little bit of meat - not enough for the 4 of us, but way too much to feed the dog (yet that is what I often end up doing). Now I know what to do with it. I also make broth once a week - and I don't always use the meat in the broth (as I use it to make sauces, boil rice etc), this would be excellent use for that meat. I would def. also use lard or duck fat instead of butter.

Dina Johnson
Posts: 31
Location: Butte County Idaho zone 4 but more like zone 3 Lots of wind and average of 8-9 inches ann. precip.
1
I like...

posted 4 years ago
I so wish I was able to 'wrap my head' around all this!!!

I have 20 geese blessing our pantry... and looking high and low for 'how to do this' from live bird to meal... I am NOT wanting any of this in my fridge nor tiny freezer.. so was looking at canning them...

To land on this Kind Pharm has been a blessing and a curse! May your days be yin/yanged and exciting! May those that meet us leave us with a song and smile! Carpe Diem!